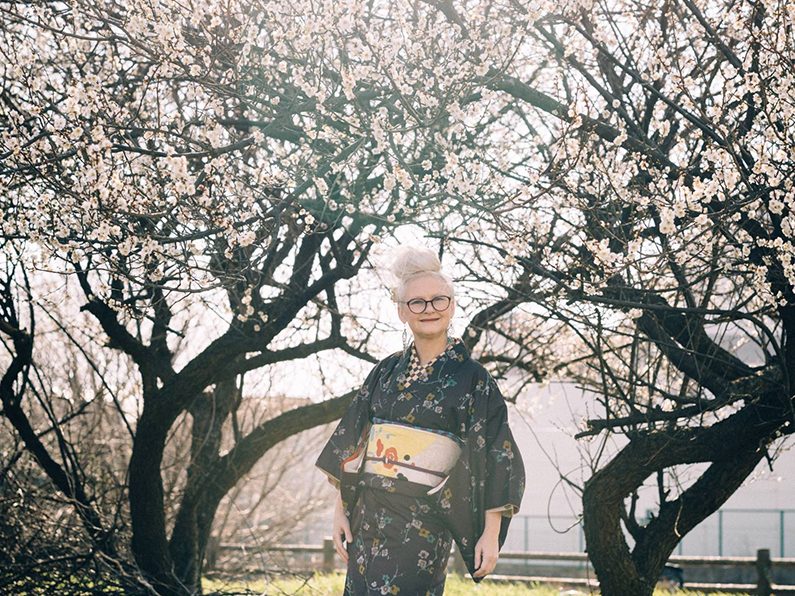 Are you curious about the Japanese traditional dress known as kimono? After the recent media storm surrounding Kim Kardashian’s short-lived underwear brand “KIMONO” and the outcry that followed from the Japanese side, it seemed fitting to speak to an expert on kimono: Sheila Cliffe.

I first met her at a fashion show of kimono designers in the spring of 2019. With her white hair, she attracted interest and looked elegant in a gorgeous kimono. She had just finished taking a selfie with some admirers when I tapped her on the shoulder.

A mother of three born and bred in the United Kingdom, Cliffe has lived in Japan since 1985, when she came to Tokyo as a London University art and drama student. She couldn’t speak a word of Japanese and didn’t know the difference between an undergarment kimono and the real thing.

Today, she is a key person in promoting the culture of kimono. She walks confidently in a kimono she puts on herself and wears with her own unique style. She also teaches a course on how to wear kimonos at Jumonji University in Saitama, Japan, and has acquired a PhD in the study of kimono trends from the University of Leeds.

In Italian there is a saying, “You wanted the bike, now you have to learn how to ride it.” It’s what you tell people who have gotten themselves knee-deep into a situation that was more complex than they anticipated and then have to figure out a way to deal with it.

That was what came to mind when I heard how Sheila Cliffe started her journey into the culture of kimono. Without speaking a word of Japanese, the  drama student in her early twenties enjoyed poking into kimono shops and running her fingers over the beautiful multicolored silks.

But a couple of years after coming to Japan, she took her first step into the world of kimono. “There were some shops I went into often and kind of made a relationship with the staff. And then one day I went into a department store and the shop employee said, ‘How about you try it on?’ And some people going past said, ‘Oh you look so lovely!’ And I ended up buying it.”

There was a catch, however. For the initiated, the price on display was that of the silk fabric. For the final product, which included sewing and lining the garment, she had to pay almost double the amount, summing up to ¥200, 000 JPY ($1,851 USD).

More importantly, Cliffe now owned a very expensive kimono which she didn’t know how to wear — and this wasn’t the era of YouTube tutorials.

Although Cliffe admits there were English books teaching how to wear kimono, she confessed it was rather hard to learn how to fold cloth from pictures. Therefore, she used the only method she knew — going to school to study the subject. She found a kimono wearing school called Suzunoya. “The only way to learn, if you didn’t have a granny who knew, was to go to a kimono school,” she said.

She went, intending to just learn to dress herself. But after she finished the beginners class she went on to the intermediate, and then finished the advanced classes.

In the end, Cliffe didn’t just learn how to dress herself. With that one kimono, which was almost bought by accident, she developed her unique style and regularly wears a kimono. Now she has an Instagram page — @kimonosheila — with more than 15,000 followers.

When I met Cliffe she was wearing a bright red kimono with white flowers and an aquamarine-green obi jime, the woven cord which helps keep the obi in place. It turns out, this innovative style was part of her advocacy for a more modern approach to kimono.

“[A] misconception that people have is that because kimono is a tradition, it never changes. The shape hasn’t changed very much in the actual structure, but the garment has changed a lot,” she said.

The kimono industry has changed drastically as well. Once the business was split between weavers, dyers, fabric merchants, and kimono designers or makers. But increasingly it has become a one-man show, with some kimono designers not even having their own shops.

“So the new young designers tend to be using more the methods of marketing distribution you would find with small brands in the fashion industry. They have a strong media presence. They use online shops. They do events — for example, Harajuku Laforet and other small galleries,” explained Cliffe.

It isn’t just the structure of the market changing either. The fashion is changing as well. Kimono, which used to be most often made out of silk, is now made in cotton, denim (as showcased by Kimono designer Jotaro Saito), polyester, and other fabric mixes. One of the examples Cliffe mentioned is an organic fabric called soanature, made from wood pulp from sustainable forests, which is much like polyester but breathes better.

Finally, the designs themselves are changing in an effort to keep even old kimonos youthful and hip. There are many examples: strong colors, cat designs, lace, and a recent trend toward musubanai obi musubi, meaning an obi which doesn’t need to be tied and is held in place just with the obi jime chord (and is therefore less labor intensive to put on).

Recently people are even wearing pleated skirts worn under a kimono as a fashion statement. It is also a creative way of utilizing short kimonos.

Considering all of the changes and trends, Cliffe encourages everyone to think of kimono as an evolving fashion garment.

“Although kimono moves slower than western fashion, it moves. Therefore the idea of the unchanging kimono is a false one. Japan has its own native fashion system, completely independent from fashion from Europe,” Cliffe said.

The Challenges of the Kimono Industry

After studying and learning about kimono most of her life, her eyes still light up when talking about the new trends in kimono fashion.

However, as with any garment rooted in tradition, not everyone embraces the new way of doing things. This pushback perhaps reflects an attempt to protect the quality and luxury of the item. Cliffe’s response to those traditionalists is that something needs to be done to keep interest in kimono alive. She argued, “[If] kimono only stays there, then it won’t survive because it will become irrelevant.”

Cliffe attributed the main reason for this not specifically to kimono’s popularity, but in general to a crisis in the formal wear industry.

To add to this, Cliffe argues that since the Second World War the industry “has created this image of kimono being very formal, untouchable and expensive, and that’s worked against the kimono industry.”

For anyone in the kimono industry, it’s hard to talk about kimono without mentioning the issue of cultural appropriation. To what extent is it acceptable for foreigners to wear or refashion what is commonly considered the traditional dress of Japan?

Just to cite one example: In 2015 the Boston Museum of Fine Art was bombarded with criticism upon hosting an exhibition which included a workshop on trying on a kimono, imitating the portrait of Claude Monet “La Japonaise.” Although the exhibition was sponsored by NHK, the Japanese national broadcasting organization, and was very similar to an exhibition hosted in Japan, it was showered with criticism of being racist and culturally insensitive.

More recently there was a brouhaha around a new Kim Kardashian product. She initially decided to call a series of “shapewear” by the brand name KIMONO — a move which stirred outrage. Even the mayor of Kyoto weighed in, arguing: “Kimono is a traditional ethnic dress fostered in our rich nature and history with our predecessors’ tireless endeavors and studies, and it is a culture that has been cherished and passed down with care in our living.”

We asked Sheila Cliffe for her take on the debate about who can wear a kimono. Her answer: “I think that anyone can wear it, but I think there are appropriate and inappropriate ways of wearing it.”

She quoted as an example an episode in 2014 when Lady Gaga was seen wearing a kimono and heels on her way to a yoga studio. Cliffe commented: “It was a beautiful handmade formal kimono. It was trailing on the street. That would be disrespectful to the maker, even if it was a western dress.”

Ultimately, we asked, how would you explain what is so special about kimono to a layman?

Sheila Cliffe laughed for a second, and told me she has explained this in Japanese but rarely in English. Ultimately, she said, it is a “complete and fulfilling fashion system.” Then she elaborated on how it created bonds between people and things:

“It binds people to other people — makers, wearers, generations. It can be used across the generations. They say it lasts 100 years, but it doesn’t become old fashioned because there are so many things you add to the kimono itself to make the outfit. So you can re-coordinate it to make it youthful. There are seasonal designs, so it binds people to nature. Because it has a long life, it’s slow fashion. So it’s never just about the surface, it has depth.”