The Macabre and the EroticーArtworks Tell the Story of Japan's Diversity

Diverse value systems are respected in present times. Yet, as seen in classical literature, and through the subjects of paintings, an open-mindedness concerning expression of the bizarre, including sexual, has long existed in Japan.

Thrilling works from modern to contemporary art have come together under one roof in the exhibition: "Japanese Beauties of Fantasy: Mystical Stories of Japan Seen through Art" exhibit currently on display at the Yayoi Museum (Bunkyo Ward, Tokyo)

A beautiful woman rising up from the dark lit only by a candle flame. The graceful nude is enchanting in "Aoi" ("Heartvine") by Shin Misho (1914-1981), a Western-style painter known for illustrating serial novels in newspapers. The subject of his painting is Lady Aoi from the Heartvine chapter of The Tale of Genji. The painting depicts the hair-raising story of Genji's mistress, Lady Rokujo, who is transformed into a vengeful spirit that haunts and kills Genji's lawful wife, Lady Aoi. The exposed bosom of Lady Rokujo's spirit and Lady Aoi writhing in agony bring together the macabre and the erotic in the cool blue colors of the image.

Murasaki Shikibu, author of The Tale of Genji (11th century Japanese novel) was unrestrained in her portrayal of sexual desire between men and women. After the Heian Era ended, stories spread about her being condemned to hell for deceiving the people. Japanese-style nihonga painter, Sayume Tachibana (1892-1970), who specialized in paintings of bewitching beauties, had a love for Japan's legends. In his work, "Murasaki Shikibu's Descent to Hell", the woman's facial expression as she suffers in agony is indeed beguiling. This marks the first time the work has been exhibited publicly. Although Sayume did have a group of enthusiastic followers, he was not well-known. Dubbed the "Phantom Painter", an exhibition in 2015 at the Yayoi Museum based on research of his works drew considerable attention.

Japanese classical literature and folklore are full of mysterious stories involving ghosts and demons, snakes and foxes, spiders and even fish. The stories have often been depicted in various art forms, including Ukiyo-e prints. One well-known story performed in Kabuki theatre is the Heian Era's "Legend of Anchin and Kiyohime". The story tells how Kiyohime falls in love with and is betrayed by the monk Anchin. In a fit of rage, Kiyohime is transformed into a serpent and burns Anchin, who had been hiding inside a bell, to death. 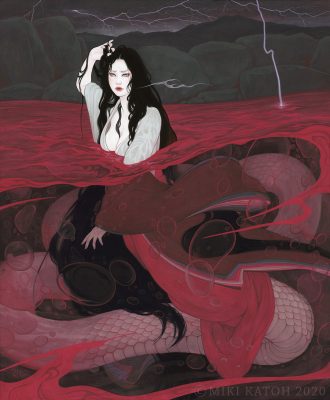 "Kiyohime" is the subject of a masterpiece of the same name painted by Kokei Kobayashi (1883-1957), a Japanese nihonga painter. However, the work displayed at this exhibition is by contemporary artist Miki Katoh (born 1973), entitled "Hidaka River". The work depicts Kiyohime transforming into a serpent as she swims in the river. The red tones in the painting bring out the whiteness of the woman's skin, enhancing the fearful nature of the painting. Katoh has said, "I wanted to express the sadness and despair of Kiyohime after being betrayed by Anchin". We see this in the passion erupting from Kiyohime's image, almost as if she is on the verge of insanity.

While there is increased recognition of sexual and gender minorities (LGBT) in the present day, stories of "boys' love" (a term that refers to the contemporary genre of novels and manga that focus on homosexual relationships between men) are nothing new. Love stories involving Buddhist monks and their younger acolytes, called "chigo", can be found in the Otogi-zoshi short stories that date back to Japan of medieval times. While the date of its origin is uncertain, "A Long Tale for an Autumn Night" is considered to be the first of these stories.

"A Long Tale for an Autumn Night"

Among the works of Kasho Takabatake (1888-1966), a popular painter from the Taisho to the early Showa periods known for his lyrical paintings, is an illustration based on "A Long Tale for an Autumn Night". Takabatake's delicate depiction of a beautiful young man gives the work a sweet and romantic touch.

Curator Keiko Nakamura of Yayoi Museum explains. "Chigo were thought to be the incarnation of the Goddess of Mercy (Kannon), and having relations with chigo was considered to be a virtuous act."

Behind the beauty of chigo lies a profound and expansive world. The current exhibit offers a look at the depths of fantasy in Japanese art, both through viewing the mystical art itself and learning about literature behind it.

"The exhibit is intellectually stimulating for adults," says curator Nakamura.

The exhibit runs through January 31 of next year (closed Mondays and New Year's holidays) at the Yayoi Museum. Entrance is 1,000 yen for adults. Inquiries on opening hours should be directed to 03-3812-0012. The museum’s website can be found here (in Japanese).