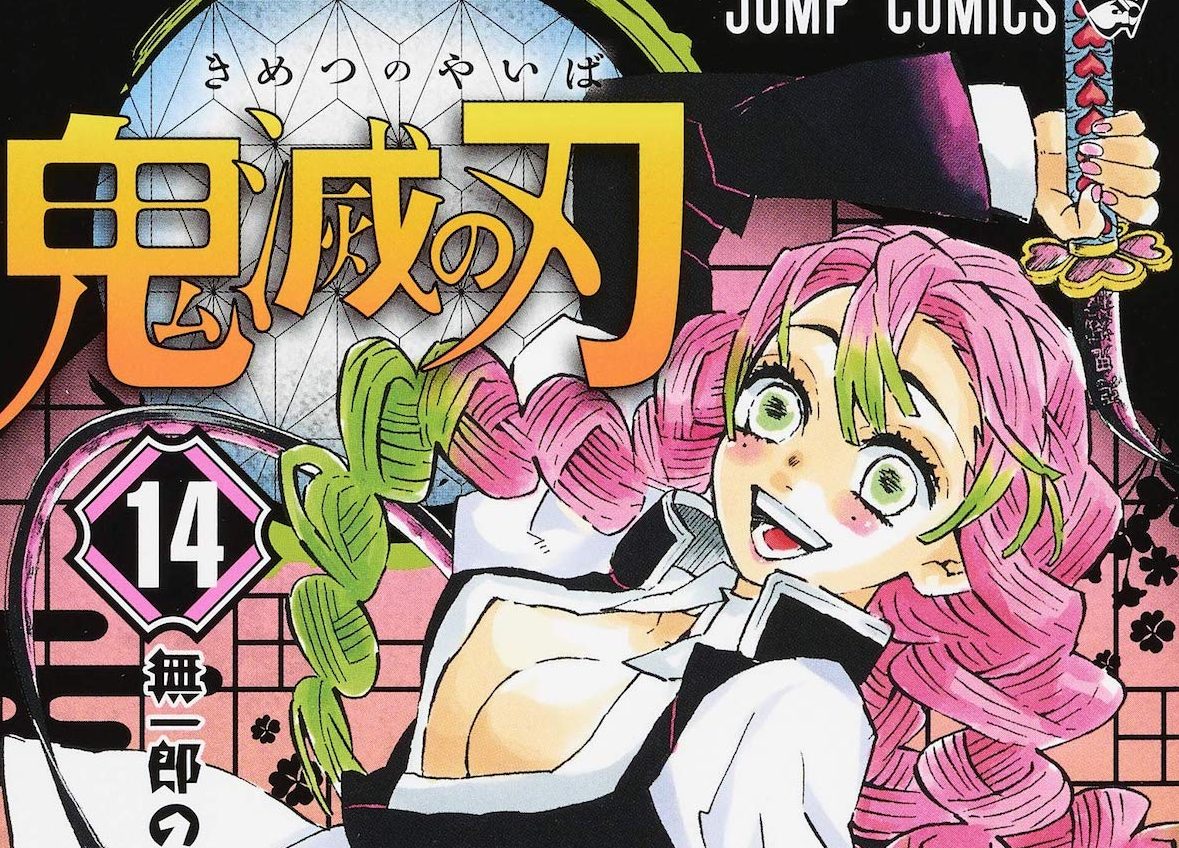 ~Mitsuri Kanroji is a swordsman in Demon Slayer. Kanroji Temple in Wakayama Prefecture dates back to about 360 years ago~

An ancient temple in Kinokawa, Wakayama Prefecture, has become a sensation over its name “Kanroji”. The name is homonymous with “Mitsuri Kanroji”, a female character that appears in the smash-hit manga Demon Slayer: Kimetsu no Yaiba. On weekends, cosplayers can be seen taking photos as mementos of the sacred site.

The city noticed the buzz and produced a promotional video to screen during commercials at movie theaters. They further erected a “Pillar of Love” in a nearby park to promote the place as a “holy ground of love”. 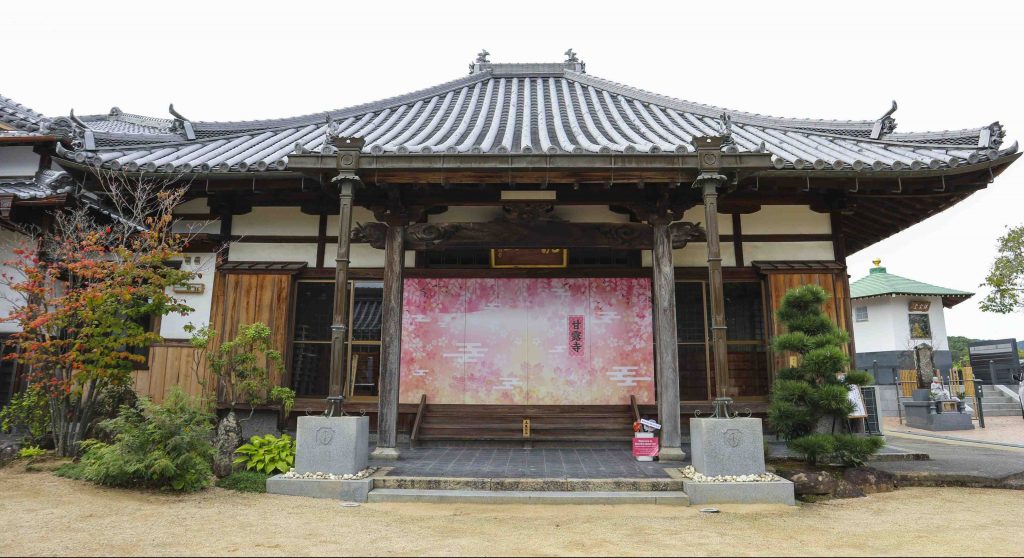 ‘Love’ is the Common Denominator

Mitsuri Kanroji is a swordsman in Demon Slayer: Kimetsu no Yaiba. She is one of the hashira, the most powerful swordsmen in the Demon Slayer Corps, whose mission is to hunt demons. Her signature combat style is “Love Breathing”.

Kanroji Temple in Wakayama Prefecture is said to have been built during the Edo period, about 360 years ago. The leaves of the Nagi Tree in the temple’s precincts are said to bring luck to one’s love life. The film adaptation released on October 16 has boosted its popularity, attracting more cosplayers who hope to take a photo with the auspicious tree.

Akari Suzuki, a 29-year-old housewife from Kainan, Wakayama Prefecture, visited the temple with her eldest son Rei (6) and daughter Runa (1). She was pleased with her children’s costumes, which took her three weeks to make by hand. “I’m glad we came. The costumes match the temple’s ancient atmosphere.” Her son Rei seemed satisfied too. "My mom made me a cool costume," he boasted.

According to the temple’s chief priest, Hogan Yamashita, 71, the number of visitors has surged with the release of the film adaptation of the manga. “I haven’t counted accurately, but I think the daily number of visitors exceeds 200 on busy days.”

Chief Priest Yamashita learned of Demon Slayer around spring of this year from a woman who was a fan of the manga, and fell in love with the series. Now he has the complete collection. “The manga evokes empathy for the characters, such as the enemies who had not become demons by choice. It also expresses the Buddhist spirit and principles of life, such as familial love and friendship,” he explains. 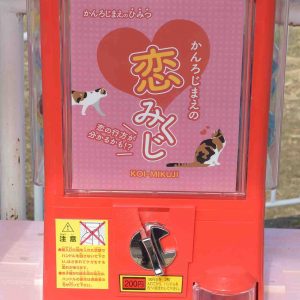 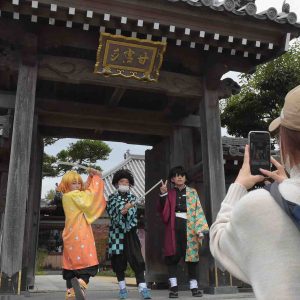 This has been a great opportunity for Kinokawa City. They created a 30-second promotional video in cooperation with Wakayama Electric Railway, because the Kishigawa Line, famous for its cat stationmaster, runs near the temple. After release of the Demon Slayer film, a shortened version of the promotional video was released as a commercial at several movie theaters, including Umeda, Osaka.

The city also installed a special photo backdrop at the temple to accommodate the growing number of cosplayers and tourists. Changing rooms are now available on weekends at a community center near Kanrojimae Station on the Wakayama Electric Railway line. They also launched a website to promote sweets and other attractions that can be enjoyed in the vicinity. City officials have erected a two-meter “Pillar of Love” in a park near the temple.

A capsule machine for love omikuji, or fortune slips, can be found at Kanrojimae Station. Each capsule contains an omikuji divining your love life and a bag for storing leaves from the Nagi Tree in Kanroji Temple. The leaves of the Nagi Tree are said to bring blessings to your love life because the vertical veins of the leaf make them difficult to tear.

Kishigawa Line had been enjoying unprecedented popularity because of its cat stationmaster, Tama. But passenger traffic has dwindled this year due to the coronavirus pandemic. “I hope many people will use the line again because of Demon Slayer,” said a staff member. 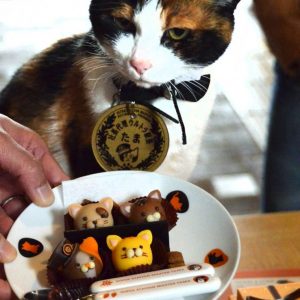 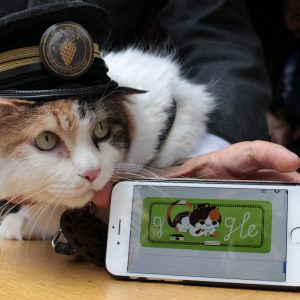 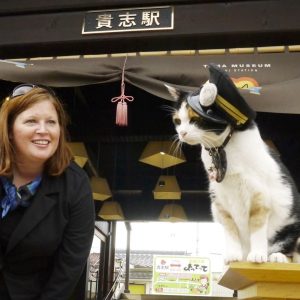 The animation film Demon Slayer: Kimetsu no Yaiba the Movie: Mugen Train was released nationwide and has so far recorded a box office revenue of 23.34 billion yen and a viewership of 17.5 million people, making it the fifth highest-grossing film in Japan within just 24 days of its release. The phenomenon is sweeping the entire nation.

Convenience stores and food companies are churning out Demon Slayer character goods, while the streets are overflowing with pink and neon green “Demon Slayer colors”.

A special exhibition incorporating Demon Slayer and kabuki is being held in Minamiza, Kyoto. “Enjoy kabuki by comparing it to the worldview of anime,” recommended kabuki actor Onoe Matsuya.

In Yokohama, a mysterious donation was made by a person claiming to be Tanjiro Kamado, the main protagonist of Demon Slayer.

The impact of Demon Slayer has even reached the Japanese government. Prime Minister Yoshihide Suga quoted Demon Slayer during a meeting of the Budget Committee of the House of Representatives on November 2: “I will respond to questions from the opposing party with ‘Total Concentration Breathing’.” Chief Cabinet Secretary Katsunobu Kato hailed the Demon Slayer phenomenon as “great news” at a press conference in September.

On November 5, it was announced that “Demon Slayer” was nominated as one of the 30 candidates for the 2020 U-Can New Words and Buzzwords Awards.