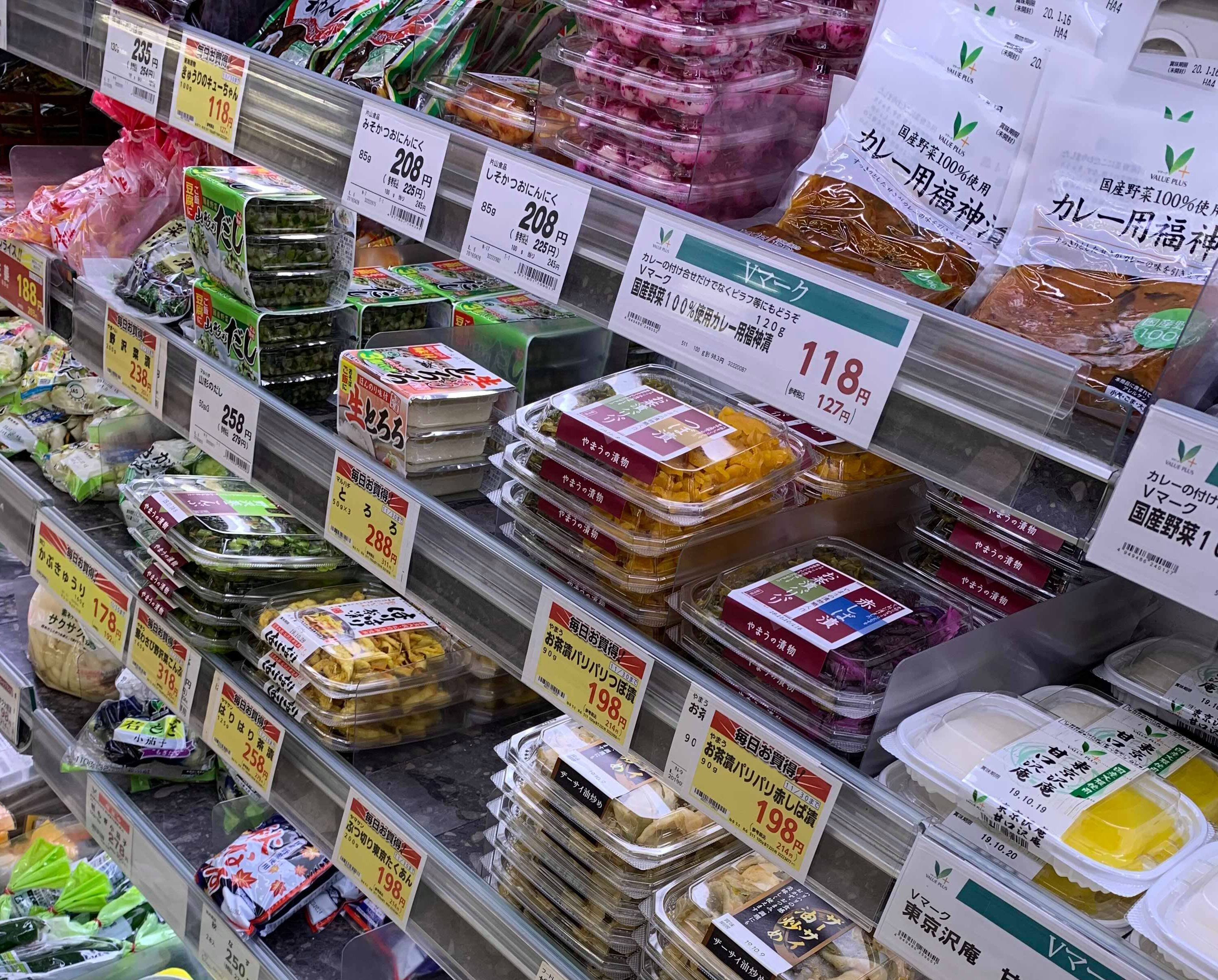 Have you have ever eaten Japanese pickles? If you’re familiar with the taste, you might be surprised to hear that I chose tsukemono, traditional Japanese pickles, for my research project on my first trip to Japan.

Compared to the lightly vinegared cucumber pickles of the United States, Japanese pickles come in a wide variety of foods and flavors. There is plain tsukemono from fresh salted vegetables, pungent ninniku shoyuzuke, (soy sauce pickled garlic), sour umeboshi (pickled plums), or adventurous shiokara (raw seafood fermented in its own viscera), to name a few.

Admittedly my choice of Japanese pickles was not a well-informed decision. I had never been to Japan. I grew up mostly on the East Coast of the United States around Boston. I had eaten Americanized Japanese food (the usual suspects: teriyaki, sushi, ramen), but I had never experienced Japanese food culture firsthand.

At the time, I was about to depart for Kanazawa, Japan, to participate in a one-month study abroad. Sitting in our college’s library, my project partner and I realized that we both loved to eat. “Let’s choose something delicious!” we enthusiastically agreed. I think we imagined eating our way around Kanazawa for a month, enjoying yummy treats every day.

Flipping open a Japanese cookbook, we found an alluring description of Japanese pickled vegetables. The author described how pickles play an important role in harmonizing the flavors of the meal. Pickles add zest to heavy rich meals, pizzazz to otherwise plain rice, and vivid color to dress any plate.

Plus, Japanese pickles have traditionally been made at home with families developing their own special flavors. “Like American chocolate chip cookies!” I thought. I was struck by a vision of visiting families, learning their secret pickling methods, and snacking on plates on pickles.

Now, those more experienced with Japanese food might be laughing at me right now. While each are delicious in their own way, the flavor profiles of sugary American chocolate chip cookies and Japanese pickles are rather different. With all due respect, some Japanese pickles veer into the territory of “acquired taste.”

What Makes It ‘Tsukemono’?

The term “tsukemono” is actually rather generic, translating literally to “pickled things.”

In the United States, we tend to associate “pickle” strongly with “cucumber,” especially spears of cucumber served alongside a sandwich. However, Japanese cooking utilizes a wide variety of fruits and vegetables for preserving. While salt, vinegar, and sugar are used for flavoring, miso (fermented soybean paste) and soy sauce, along with sake and rice bran, can also be used.

With Japanese pickles, fermentation times can be long (resulting in more intense flavors) or short and easily done at home to accompany an evening’s meal. Asazuke (literally: shallow pickling) is one of the easiest Japanese pickles to make. Vegetables — typically cabbage, daikon, and carrots — are salted and then weighted (and/or squeezed) to remove water. The process takes just a few hours and produces crisp, light, and refreshing pickles — a perfect foil to many Japanese foods.

While many Japanese pickles are hard to find for sale outside Japan, there is one pickle that often appears on restaurant tables even in the United States. That is gari (pickled ginger), the thinly-sliced ginger marinated in sugar and vinegar usually served alongside sushi or sashimi.

Pickled ginger is meant to cleanse the palette, enhancing the flavors of the fresh fish. Due to its ubiquitous pairing with sushi, some people even call it “sushi ginger.”

However, pickled ginger is just one of many pungent, intensely-flavored, and brightly-colored pickles that awaited me in Kanazawa.

My Crash Course in Japanese Pickles

My first week in Kanazawa did not start with lightly-flavored, easy-to-like pickled vegetables such as gari and asazuke, though the pickle section was not hard to find at the nearby open-air market. The entire area gave off a sour, pungent smell.

Stopping at the first stall, my partner and I were offered nukazuke, which were vegetables (usually daikon, cabbage, and cucumber) fermented in rice bran. Rice bran was made from the nutrient-rich outer layer of rice grains and looked like wet sand. Whole vegetables were buried raw in the rice bran to ferment. The mixture was aerated by hand every couple of days and the vegetables were re-buried.

At the stall the shopkeeper pulled a slightly limp cucumber from deep inside the mixture and quickly rinsed it to remove the rice bran clinging to its surface. Cutting a thick slice, she offered us a taste. Accepting the sample, I saw that the cucumber was shriveled around the edges, like it had been soaking a bit long. Tasting it, I was overwhelmed by its sour flavor and intense saltiness. Nukazuke may be a perfect companion to plain steamed rice, but eaten on its own was powerfully salty. It left me desperate for a glass of water.

That was my first bite of Japanese pickles. Initially I was not sure how I would make it through the rest of my month in Kanazawa, but my partner and I went on to taste many other unfamiliar and pungent Japanese pickles.

We ate more types of nukazuke, including carrot, eggplant, and daikon fermented in rice bran. We also tried umeboshi (pickled plums), known for their bracing saltiness and biting acidity. Legend has it that pickled plums are so strong that they can even corrode metal lunch boxes.

Aside from vegetables, Japanese pickles are also made from seafood. One of the more memorable samples we tried was ika no shiokara, which was made from chunks of raw squid fermented in their own innards. The slimy texture was slightly off-putting, and the flavor was equally unfamiliar — salty, with a slight whiff of seafood gone bad to a traditional American palette.

There are Attractive Delicacies, Too

There were also pleasantly delicious surprises in our pickle-eating trip around Kanazawa.

One day, we visited a local ryokan and the chef (also the innkeeper) spent the morning making pickles with us in her beautiful kitchen. The room was light and airy and sparkling clean. Dressed in a starched white apron, our host immediately put us at ease as she competently moved around the kitchen preparing ingredients.

She said that we would be making a daikon and salmon pickle. Since it would take nearly two weeks to ferment, she wanted us to try a batch she had already prepared.

From the refrigerator, she produced a plate of thick slices of daikon. The daikon had been cut in half, like a hotdog bun, and stuffed with salmon chunks. The combination was dressed with colorful slivers of carrot and yuzu zest.

After my previous experience with fermented squid, I was a bit hesitant to taste the fermented salmon. But the pickles had a fresh, sweet smell from the citrus peel. Taking a bite, I was startled by the delicious flavor. The spicy bite of the daikon perfectly balanced with the richness of the salmon, giving way to tart, fragrant undertones of yuzu. That bite left me wanting more.

When I departed for Kanazawa I hoped that I would get to try many delicious foods. In a way, I accomplished my original goal. Every morning, my partner and I set off to visit the home of a local. We would usually work until lunch, cutting and salting vegetables and immersing them in various mixtures to ferment. Our hosts always fed us ample amounts of pickles. They also produced many other delicious treats — lovingly brewed cups of tea, slices of matcha roll cakes, dried persimmons plucked from the eaves of the roof.

More than any flavor, though, the generosity of everyone I met has stayed with me. People opened their homes to me, a complete stranger, and shared their time and kitchens with me. Rare for many visitors to Japan, I got the opportunity to glimpse into the everyday life of people in Kanazawa. I saw their bookshelves crowded with souvenirs from their travels around the world. I heard their stories of how they learned to cook alongside their mothers in the kitchen. I sat around their kitchen tables swapping stories about our hometowns.

As a student, the tsukemono research provided me an opportunity to learn about Japan and develop a deeper appreciation of Japanese culture. Yes, some of the pickles were delicious. But more than anything I ate, the warm welcome I felt from everyone I met has drawn me back to Japan again and again… and again. Since that first trip to Kanazawa, I have been back to Japan over 10 times and spent nearly 3 years there.

Who would have thought that my love for Japan would spring from pickles! That is exactly what happened.

My deep thanks to everyone who kindly hosted me for my pickle research project. To others planning to visit Japan, the best advice is to stay open to possibilities. You never know where an experience might lead, no matter how unlikely it looks on the surface.

For those of you curious to try some Japanese pickles for yourself, here is a simple recipe for pickled daikon (Japanese radish) to try.

5 tablespoons of ponzu (either bottled or homemade)

2) Slice the daikon into quarter moons (each ¼ inch thick).

3) In a bowl (or plastic bag) combine the daikon with 1 teaspoon of salt, mix well.

5) Squeeze as much water as possible out of the daikon.

6) Combine the daikon with the ponzu, sugar, sesame oil, and red pepper flakes.

These pickles are crispy and addictively tasty! They get tastier with time, as the daikon soaks up the flavor of the dressing. If you somehow do not eat them all on the first day, the pickles are especially delicious two to three days later. The refreshing taste is perfect for a hot summer day. Enjoy alongside a meal or as a quick snack.