Preliminary figures released by the Cabinet Office on August 14 indicated that the seasonally-adjusted gross domestic product (GDP) grew by 1.0% after adjustment for inflation compared to the previous period.

If this pace continues for a year, it will lead to an annual growth rate of 4.0%.

Growth has continued uninterrupted, and the yearly increase is the greatest in about two years since the 4.8% increase in the January-March quarter of 2015.  The growth has been of the “domestic demand led type,” according to the Cabinet Office, driven by private consumption expenditures and corporate capital investment.

This 4.0% annualized increase was led by strong consumer spending, which accounts for roughly 60% of the GDP. There is, however, an increasing risk of a decline in external demand due the situation in North Korea and other issues.

In order to maintain the growth trajectory of the economy, it is necessary to ensure the recovery of personal consumption, which is the pillar of domestic demand, through wage increases.

In a press conference on August 14 Toshimitsu Motegi Minister for Economic Revitalization observed,  “Individual consumption and capital investment, which account for the bulk of private demand, have steadily increased and I would like to take thorough measures so that domestic demand-led economic growth will continue.”

It was the sale of automobiles and home appliances that pushed consumption. Nissan Motor Co., Ltd. saw strong sales of hybrid vehicles, etc. Domestic sales in the April-June period rose by 45.6% year-on-year to 131,000 units.

There is, however, also the view that the consumption recovery will “slow down in the July-September period,” according to principal researcher Takeshi Minami of the Norinchukin Research Institute. The effect of introducing new models of automobiles and replacement demand for home appliances may be temporary. 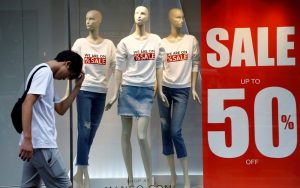 The spreading of recovery is also “spotty,” says Shinichiro Hinozuka, senior managing director of Suntory Holdings. Supermarket sales turned negative in the first half for the first time in four years. Similarly, cosmetics “have not recovered as much as we thought,” president Masahiko Uotani of Shiseido says.

According to Mr. Minami, the reason that the consumption recovery will not continue is because “the momentum to raise wages will not increase.”

According to Keidanren (Japan Business Federation), the average amount of union members’ summer bonuses and lump sum payments from major companies was 871,872 yen for 2017. This is the first time in five years that that these payments have declined compared to the previous year.

While a private survey  found that in the three major metropolitan areas the average starting wage for part-time jobs was the highest since the survey began in January, 2006, this is not enough to impact on overall consumption.

Mr. Motegi explains that the reason wages are not rising is because the labor shortage “results in lower hourly labor productivity. The government thinks it is necessary to create an environment where increased corporate profits will make it easy to raise wages. To do this it is pushing technological change and “a revolution in human resource development,” but it looks like more than this is needed.

In the background of the consumer confidence slump, those currently employed are concerned about the future because of worries about the social security system. In order to encourage consumption it is necessary to have what officials of the Cabinet Office call “a multiplicity of measures” that restore  confidence in the employment environment and future earnings and not just an increase in wages.

Nobuhiko Yamaguchi is a staff writer of the Sankei Shimbun Economic News Department.