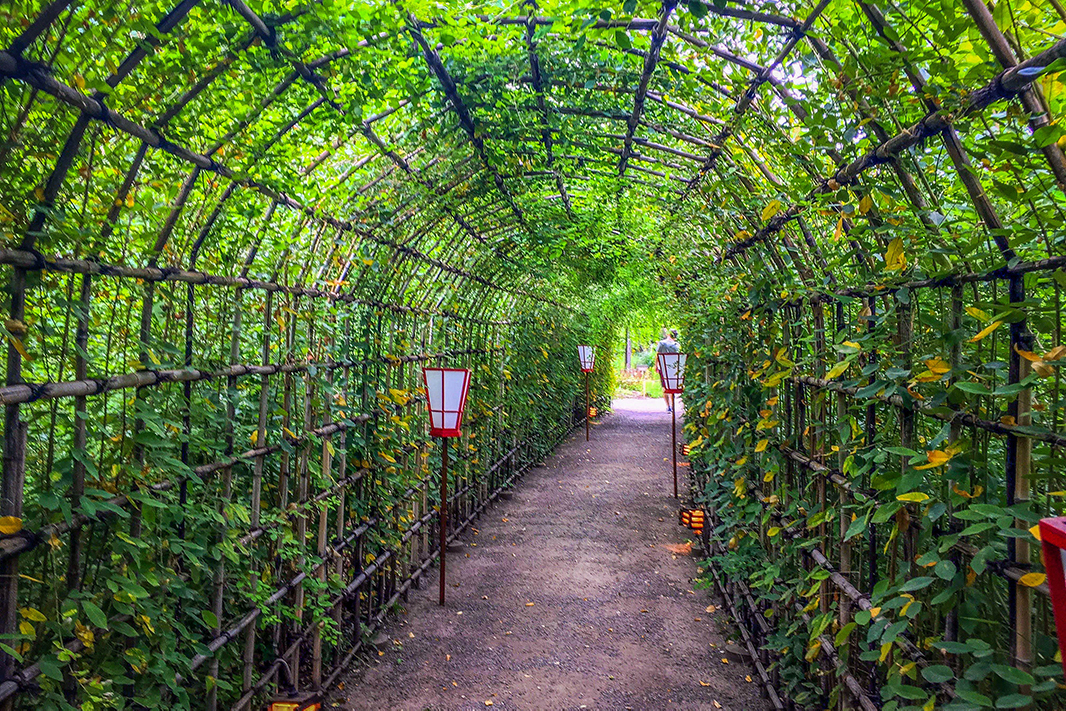 It’s like stepping into a fairy tale. In fact, passing into Mukojima-Hyakkaen’s Japanese clover tunnel feels like discovering a hidden world.

The entire tunnel is blanketed by Japanese clover, which hangs down over its entrances and lends the entire space the atmosphere of a secret hideaway. Nothing but faint sunlight and breezes can get in.

However, more than just a respite from the bustle of Tokyo, Mukojima-Hyakkaen Garden is also one of my top Tokyo Instagram spots. Its dreamy Japanese clover tunnel makes the perfect backdrop, as does its caches of flowers, ponds, and hanging trellises.

Just a quick train ride from Asakusa’s popular Senso-ji Temple, Mukojima-Hyakkaen Garden is steeped in its own history. In fact, it’s the only surviving Edo era flower garden in Tokyo.

During the early 19th century, Sahara Kikuu (a wealthy antiques dealer) purchased the land and worked hand-in-hand with local artists and writers to craft a masterpiece of a garden. Christened “hyakkaen” meaning “one hundred flowers”, the garden features plants from notable Japanese and Chinese works of literature.

At the time of its opening, Mukojima-Hyakkaen garden boasted a 360-tree plum grove and served as a popular site for moon-viewing parties. Over the years, the garden weathered earthquakes, floods, and even bombing. In 1938, it was ceded to the government for its protection and it was proclaimed as a site of historical importance in 1979.

(You can read the rest of the article at this link. This article was first published by Team JJ on December 5, 2019. Check here for deeper and unique insights into visiting Japan, including wellness, travel, cuisine and more. Find us on Instagram and on Facebook.)