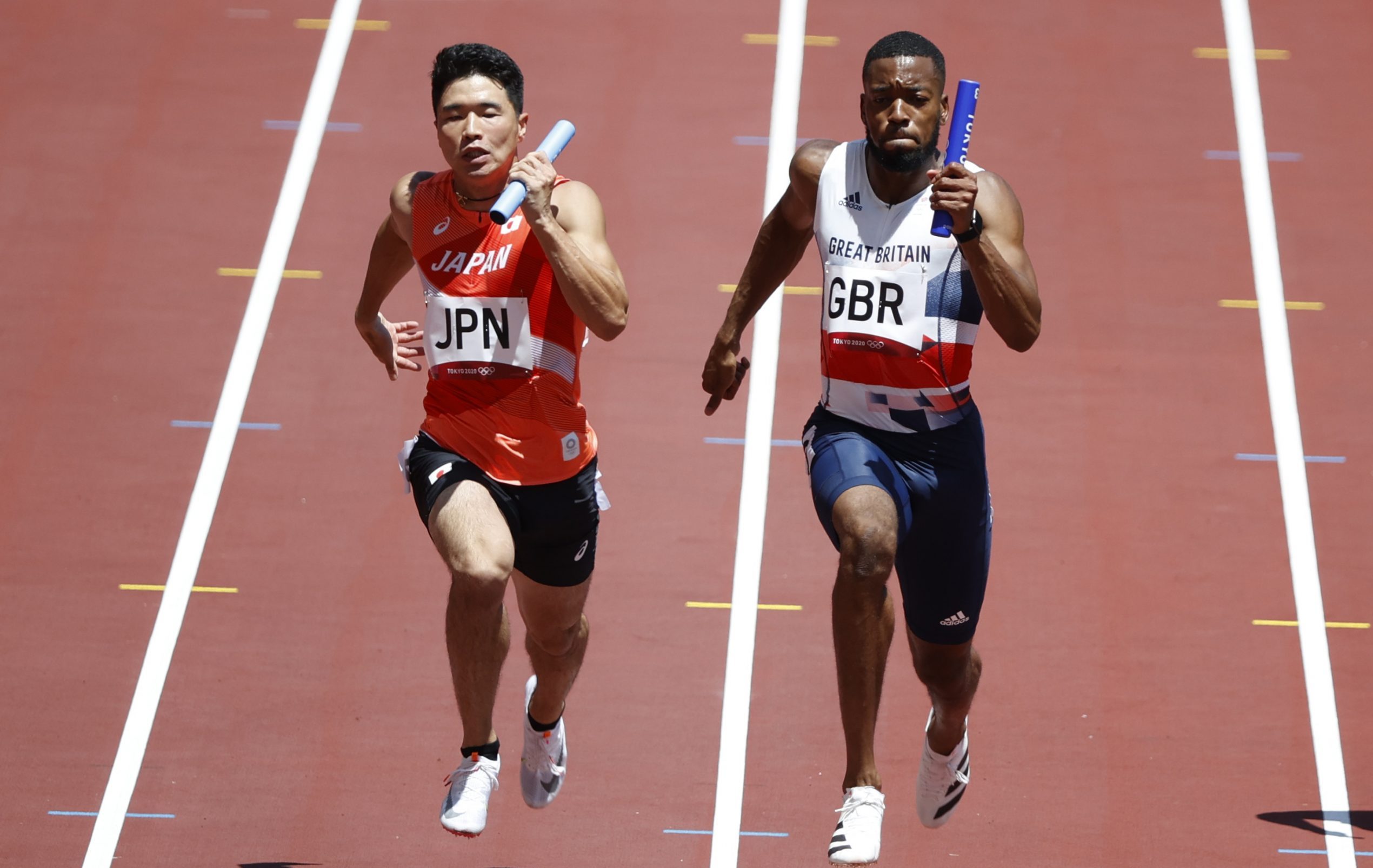 Buoyed by the happy memory of finishing second in the men’s 4×100-meter relay at the 2016 Rio de Janeiro Olympics, Ryota Yamagata and Yuki Koike joined Olympic relay newcomers Shuhei Tada and Yoshihide Kiryu with the goal of creating new joyful memories at the Tokyo Games.

The Japanese quartet moved a step closer to its goal on Thursday, August 5.

With Tada sprinting in the first leg of the race, followed by Yamagata, Kiryu and anchor Koike, Japan ran a season’s-best time of 38.16 seconds in the first qualifying heat of the men’s 4×100 relay at New National Stadium.

That effort placed the Japan medal hopefuls in third place in the heat behind runner-up Great Britain (Chijindu Ujah, Zharnel Hughes, Richard Kilty and Nethaneel Mitchell-Blake), which also attained a seasons-best time in 38.02.

Jamaica clocked 37.82 to win the heat. The dynamic foursome of Jevaughn Minzie, Julian Forte, Yohan Blake and Oblique Seville entered the event as the race favorite and lived up to expectations.

Blake ran in the relay for the Caribbean nation in back-to-back Olympic gold medal-winning efforts in 2012 and 2016. Minzie was a part of the winning quartet at the Rio Games, while Forte and Seville are Olympic newcomers in the high-profile event.

Relieved by the result, Yamagata shifted his focus to the 4×100 final after the qualifying heat.

“It was the first relay and I wasn’t sure how it would go, but it’s good to get it out of the way,” Yamagata was quoted as saying by Kyodo News after the race.

“We will pull together for the final and try [to] run our best race.”

Among the eight 4×100 finalists, Japan had the slowest time.

In the second qualifying heat, China triumphed with a season-best time of 37.92, edging Canada by a whisker and Italy, which finished third.

The United States, with a long history of medal success in the event, failed to qualify for the final, placing sixth in 38.10.

After the race, U.S. track legend Carl Lewis, a two-time Olympic gold medalist in the event, expressed disgust by what he saw.

“The USA team did everything wrong in the men’s relay,” Lewis tweeted. “The passing system is wrong, athletes running the wrong legs, and it was clear that there was no leadership. It was a total embarrassment, and completely unacceptable for a USA team to look worse than the AAU [Amateur Athletic Union] kids I saw.”