At this month’s G20 summit in Germany, United States President Donald Trump and Russian President Vladimir Putin met in person for the first time. They were scheduled to talk for only 30 minutes, but they went far over schedule, talking for 2 hours and 15 minutes.

Are these two leaders, who exercise great influence over world affairs, taking an appropriate course of action? They ignore the original purpose and duties of the G20. 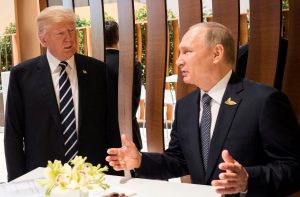 The style of bilateral relations

Certainly, this kind of international conference serves the dual functions of providing for both public and non-public discussions. In the intervals of the public-facing general meetings, the heads of each country and their representatives share information and meet privately. However, when there is too much emphasis on non-public affairs, it takes priority away from participating and debating the essential public schedule.

Actually, it’s said that both Trump and Putin snuck away from the G20’s general meeting devoted to its main theme of climate change, in order to focus on their own discussion. But the effort that went into this bilateral discussion produced nothing concrete, other than an agreement to build “safe zones” in southwestern Syria.

After Russia’s annexation of Crimea, which was ruled a violation of international law, Russia was expelled from the G8. His parting shot in reply is now famous: “The G8 is an informal organization that does not give out any membership cards and, by its definition, cannot remove anyone. All the economic and financial questions are decided in G20.” 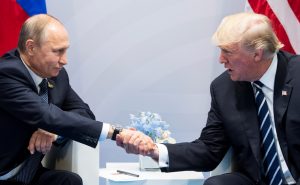 After this, if Russia had shifted its focus from the “elite developed nations” of the G8 to the G20’s wide range of participants, including developing nations like India and Indonesia, we would be able to say that Putin was a leader in both word and deed.

But there are no indications of a renewed emphasis on the G20. On the contrary, when the 2014 G20 was held in Australia, Putin beat a hasty retreat after the end of the conference.

At this year’s G20, too, Putin’s pattern of conduct emphasizes bilateral over multilateral talks, and makes it clear that this is a matter of pride. Trump behaves the same way. If this were not the case, they would not have gone over time in their bilateral discussion.

Once again, there is something going on here we cannot fail to notice. Trump and Putin demonstrate resemblances in their character, life philosophy, and behavior.

Putin shared no such resemblances with the previous US President Barack Obama. Obama is an intellectual of Ivy League stock, and as a Democrat he hoped for the growth of democracy and liberalism in Russia. Obama, a former lawyer, interpreted the Constitution of Russia by the letter (or at least made a show of doing so), and met directly with Dmitry Medvedev as Russia’s president, while ignoring Putin, who was prime minister at the time.

In return, Putin saw Obama as a weak and indecisive leader who could not make decisions at crucial moments. As a result, despite Obama’s work to “reset” relations with Russia, US-Russia relations have worsened into a “Cold War 2.0.” 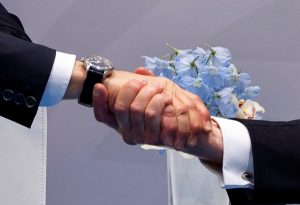 Confrontation Between Two Number Ones

Returning to Putin’s relations with Trump, there is so much in common between them that it seems like they are twins. They both have a macho attitude, and see life as a struggle. They are self-centered, and think of nothing except to achieve victory by any means. They do not permit anyone to oppose them, and they browbeat the media. They do not use the legislature for decisions, but desire to exercise authoritarian vertical control by issuing presidential orders.

These similarities have probably brought them together to promote mutual understanding and cooperation.

But at the same time, they can be seen as fanning the flames of antipathy and rivalry. For example, there is a shared unpredictability to their pattern of conduct. After reelection, Putin’s improvisational behavior increased, creating a pattern that shocked the world. The shocking annexation with Crimea and bombing of Syria are examples.

Trump refuses to lose. What will he say or do tomorrow? You would not be able to find a person who could predict his next step anywhere in the world.

Also, both leaders find a common bond in that they cannot be satisfied until they are the Number One of their respective countries. The slogans they raise make this clear: “Make America Great Again!” “Make Russia Great Again!”

There is no problem with these slogans when they are used for domestic campaigning, but with these kind of cheers, it will become harder to reach a conclusion in US-Russian disarmament and arms control negotiations.

Hiroshi Kimura is professor emeritus of Hokkaido University and of the International Research Center for Japanese Studies. After graduating from Kyoto University with BA in law, he continued his graduate studies at Columbia University, where he earned PhD in political science (1968).

His recent research has focused on Russian foreign policy in general, and particularly toward Japan. His major publication in English include Distant Neighbors (in 2 volumes) (M. E. Sharpe, 2000), Beyond Cold War to Trilateral Cooperation in the Asia-Pacific Region (Cambridge, MA: 1992); International Negotiation (St. Martins, 1999), and The Kurilian Knot (Stanford U.P., 2008).

In December 2016 he was named as the 32nd recipient of the annual “Sound Opinion (Seiron) Grand Prize” by the Fujisankei Communications Group.

Hiroshi Kimura is professor emeritus of Hokkaido University and of the International Research Center for Japanese Studies. After graduating from Kyoto University with BA in law, he continued his graduate studies at Columbia University, where he earned PhD in political science (1968).