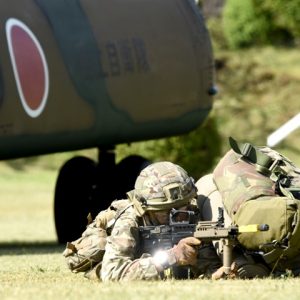 By Mizuki Okada
The United Kingdom is strengthening its relations with Asian countries, including Japan, just as it is facing withdrawal from the European Union.

The moves to enhance the U.K.’s economic and security relations in Asia are welcome, coming just as China’s maritime expansion in the South and East China Seas and North Korea’s nuclear weapons development are causing alarm in the region.

There are several facets to the European country’s increased Asian presence.

The Japan Ground Self-Defense Force (JGSDF) and the British Army launched a joint exercise codenamed “Vigilant Isles” on September 30. Both countries shared the news with the media
from the JGSDF’s Camp Fuji in Shizuoka prefecture, two days after the start. It was the first time the U.K. armed forces participated in joint drills in Japan with JGSDF. The exercise will continue until Friday, October 12.

Sanders, speaking about the relationship between Britain and Japan, emphasized: “Having a history supporting sustained democracy and also promoting these stabilities…that is one of the reasons why Japan is our closest security partner in Asia.”

The Asian region holds problems, such as China’s militarization of its artificial islands around the South China Sea and claims asserted in disputed waters of the East China Sea, and North Korea’s nuclear weapons and missile development.

Sanders spoke to The Sankei Shimbun and JAPAN Forward about the security challenges, saying, “On China’s activities, we are committed to respect for the rules-based international system.” He added, “What we do, and what we will continue to do along with Japan, is to ensure that the freedom of navigation is respected and maintained.”

The U.K. Navy’s flagship amphibious assault ship, HMS Albion, arrived in Tokyo in August. Additionally, starting this year, the Albion has deployed around the Asian region.

The HMS Albion called at Port Harumi in Tokyo in the beginning of August and stayed nearly a month. Among other duties, the Albion contributed to the U.K.’s military equipment exports during this deployment by holding an exhibition for traders on the ship.

The Albion‘s captain, Tim Neild, told The Sankei Shimbun and JAPAN Forward, “The Albion‘s deployment is part of a wider Royal Navy presence in the Asia-Pacific in 2018, which provides a clear demonstration of the UK’s unwavering commitment to the peace, security, and prosperity of the region as a whole.”

The Albion has been participating in the surveillance of ships smuggling fuel to North Korea despite the United Nations’ sanctions.

Other than the Albion, the British Navy sent a frigate, the HMS Sutherland, to Yokohama’s U.S. Naval Base this April. Another frigate, the HMS Argyll, plans to make a port call in Japan at
the end of this year.

The Albion and Sutherland also visited Singapore this year, and so will the Argyll. The Argyll is scheduled to join in an exercise with the Five Power Defense Arrangements (FPDA) countries: Singapore, Malaysia, Australia, New Zealand, and the U.K.

Advancing Peace and Rule of Law in Asia

Bill Hayton, associate fellow at the Asia-Pacific Programme of the Royal Institute of International Affairs (better known as Chatham House), said, “The HMS Albion navigated through the Spratly Islands in early May en route from Brunei to Japan.”

He also pointed out, “By sailing through the Spratly Islands, the U.K. is pushing back against China’s attempts.”

The Albion also sailed through parts of the South China Sea in August, including the Paracel islands, where China claims sovereignty. Right after this navigation, China rebuffed the U.K.’s moves.

H.E. Scott Wightman, the British High Command to Singapore and a former ambassador to South Korea, talked about regional security in his speech to ASEAN: “We are working hard with other members of the UN Security Council to halt North Korea’s development of weapons of mass destruction and to limit their threat to regional security, most recently through the deployments of the HMS Sutherland and HMS Albion to the East China Sea.”

Britain is highly motivated to maintain strong U.K.-ASEAN ties. According to the Malaysian media, New Straits Times, H.E. Wightman said, “The UK played a key role in driving peace talks between the Philippine Government and the MORO Islamic Liberation Front.”

An outcome of the talks is the Bangsamoro Organic Law, passed by the Philippine Congress and finally signed by President Duterte in the end of July.

The British Embassy Manila welcomed the Bangsamoro Organic Law in a statement, which also emphasized its engagement in Asia. “The United Kingdom remains steadfast in its commitment to support the peace process, and the social, political and economic transformation of the region in
the years ahead, ” it said.

Acknowledging the Past, Seeking a Better Future

H.E. Wightman acknowledged, “The consequences of Britain’s arrival in Southeast Asia over 200 years ago were decidedly mixed for the region.”

He added, however, “In the 21st century, across the board, the U.K. is making a positive difference, helping governments to grow their economies and increasing their scope to act independently.”

He concludes, “This role will increase in the coming years.”

It seems that Britain, scheduled to leave the European Union in 2019, will continue coming closer to Asia than to Europe.