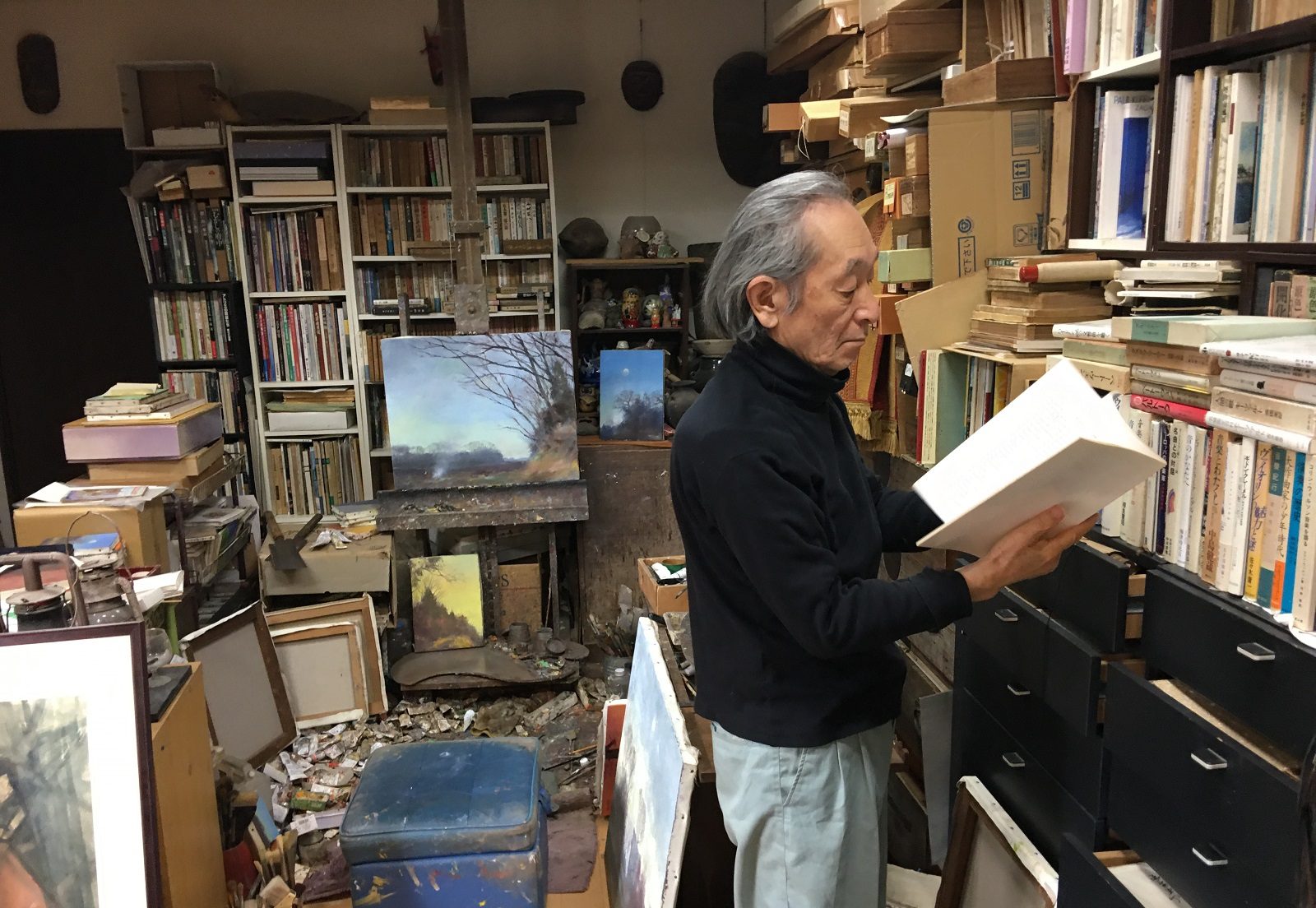 (Part 1 of a Series on the Art of Kuniyoshi)

Born in 1935, Isao remains active as an artist. He often paints scenes from Musashino, which is the former name for the modern-day capital of Tokyo. Some 50 years ago, Isao first became attracted to the works of ukiyo-e master Utagawa Kuniyoshi, whose works at that time were still relatively unknown. Isao began steadily acquiring Kuniyoshi pieces, and has since written several books on Kuniyoshi. Today, Isao is acknowledged as a Kuniyoshi scholar. 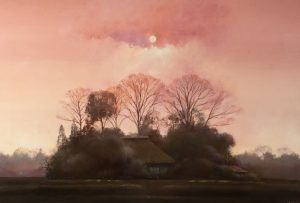 One of Toshihiko Isao's paintings. The scene of Musashino, winter (oil on canvas)

However, he is not interested in researching Kuniyoshi from an academic perspective. Instead, he encounters Kuniyoshi with an artist’s eye, and approaches the pictures and painters of the past with a reverential fondness. This sensibility has informed Isao’s collecting, and his full collection is therefore unique and endlessly fascinating.

Isao is now ready to share his experiences and the deep knowledge on Kuniyoshi as an artist and an ukiyo-e collector with JAPAN Forward readers.

Do you know about ukiyo-e?

Most people would probably answer that, of course, they know about ukiyo-e. However, there are very few who have been blessed with the opportunity to see a real ukiyo-e woodblock print, or who have studied ukiyo-e for themselves. Unfortunately, the world is filled with ukiyo-e-manque pictures which have only borrowed the style of ukiyo-e, and nothing more.

For example, when many people think of ukiyo-e they think of the vulgar distortions of Utamaro’s women depicted on posters or on the entranceway curtains hanging over the doors of neighborhood bars in Japan. So, I thought it would be a good idea to have a kind of informal studio discussion, where I could introduce real ukiyo-e to a wider audience.

What names come to mind when we think of ukiyo-e artists? Probably Utamaro, Sharaku, Hokusai, Hiroshige, and the like.

These painters are very famous, and much has already been said and written about them and their work. So I am going to discuss another artist today, my favorite, Utagawa Kuniyoshi. Let’s enjoy today’s studio discussion, covering Kuniyoshi, his pupils, and the other ukiyo-e artists of his day, with occasional digressions to other Japanese artists who were Kuniyoshi’s contemporaries.

First, a word about Kuniyoshi and who he was as a person.

Kuniyoshi was very broadminded by nature. He was gentle and kind, and everyone who knew him loved him. Kuniyoshi had many students who followed him in his private school—more than 60, in fact. Of course, this number surely included those who came regularly, as well as the heads of the commercial households who were Kuniyoshi’s sponsors. However one looks at it, though, Kuniyoshi seems to have been immensely popular.

In Kyoshin Iijima’s biography of Kuniyoshi, we read: “Kuniyoshi’s household consisted of him and one old woman, said to be the mother of Kuniyoshi’s former wife. Kuniyoshi took pity on her and cared for her deeply.” As this short passage makes clear, Kuniyoshi was a man of deep human feeling.

Kuniyoshi is also known for having been very fond of cats. In one work in Kyosai’s Conversations on Painting, published by Kyosai Kawanabe (who, as a boy named Shuzaburo, was one of Kuniyoshi’s pupils), Kyosai paints the master Kuniyoshi, surrounded by cats and looking up at a picture painted by the young Kyosai himself. 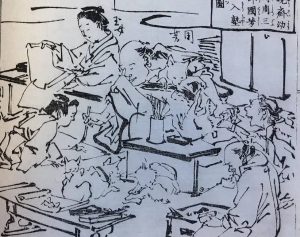 Picture by Kyosai of Kuniyoshi with cats

Kuniyoshi was also well-known for his love of festivals. In the brilliantly-colored “Brave Kuniyoshi and His Paulownia Design,” thought to have been published by Kuniyoshi himself, Kuniyoshi is portrayed from the back wearing an outlandish, “cool” happi overcoat, while his pupils are shown making merry as real-as-life participants in the festival procession.

Brave Kuniyoshi and his Paulownia Design

Because of sumptuary laws in effect at the time, townspeople had to refrain from wearing flashy clothing. But in his picture, Kuniyoshi shows himself venting his frustration with this law. This work by Kuniyoshi is extremely rare. At the present time, there are only two known copies of it in all of Japan.

I touched above on Kuniyoshi’s very broadminded personality. This was his birthright as a native Edoite or Edokko in Japanese, which means "the son of Edo", but he also had a very pure and innocent side. When a fire broke out somewhere, for instance, Kuniyoshi could not stay at home—he had to run out and watch from right up front. The old saying is that fires (and fistfights) were the “flowers of Edo”—for the son of Edo Utagawa Kuniyoshi, they were not so much flowers as hobbies.

I will end the introduction of the beloved ukiyo-e master Utagawa Kuniyoshi here. Next time, let’s have a look at his artworks, which are reflections of his personality.