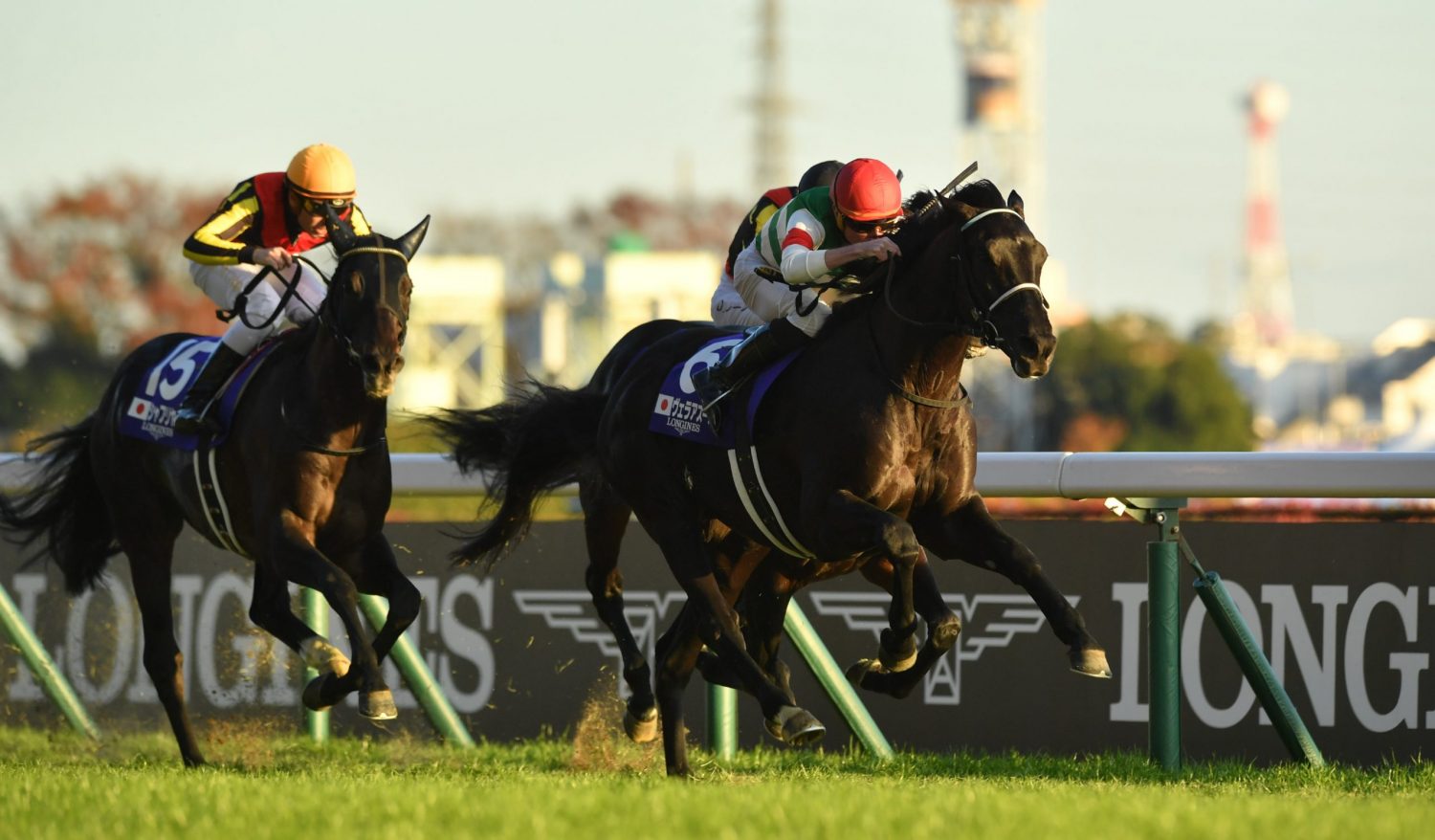 Vela Azul (right), ridden by Ryan Moore, closes in on a victory in the 42nd Japan Cup at Tokyo Racecourse on November 27. (ⒸSANKEI)

Veteran British jockey Ryan Moore and third favorite Vela Azul gave an impromptu clinic in how to survey the real estate to the left and to the right without skipping a beat in the 42nd Japan Cup.

There was little space to operate on the inside, but Moore proved that it was enough. Deftly controlling the reins, he piloted Vela Azul to victory on Sunday, November 27, beating Shahryar by three-quarters of a length at Tokyo Racecourse.

Down the final stretch, Vela Azul, a 5-year-old son of Eishin Flash, galloped second from the inside along the rail. Weltreisende was closest to the rail, and to Vela Azul's right was fast-charging Shahryar (Cristian Demuro), the race favorite.


Vela Azul reached the wire in 2 minutes, 23.7 seconds to complete the 2,400-meter Japan Racing Association Grade 1 race as the winner. Moore collected his ninth JRA G1 victory. And trainer Kunihiko Watanabe, who opened his stable in 2016, secured his first. (Watch the race here.)

Ireland's Unicorn Lion (Yusaku Kokubun), the early pacesetter who led for most of the race, faded late and finished 16th.

Vela Azul was in the middle of the field before making a decisive push to the front in the final stretch. He moved past Shahryar and Weltreisende with 50 meters to go.

After winning the Japan Cup for the second time, Moore reflected on what took place on the racetrack on this bright autumn afternoon.

"I was very lucky to ride a talented horse," said Moore, who guided Deep Impact-sired Gentildonna to victory in the 2013 Japan Cup. "The pace was very steady for the Japan Cup."

Gentildonna, also the champion thoroughbred in 2012, is the only horse to win the race in back-to-back years.

Moore continued, "The horse never had much room, but when he did he quickened up very well so he was very impressive today. I had a good horse that got me out front and we had a nice spot ― it wasn't too far off the pace and following a good horse, the horse in front was having to wait and I was having to wait [too], and when he found a bit of room he quickened up very well."

As for his position in the pivotal moment of the race, Moore summed it up this way: "I suppose for today being towards the inside wasn't a disadvantage."


Other Results at the 42nd Japan Cup

Four-time Japan Cup winner Yutaka Take, the most successful rider in the race in the 18-horse field, placed 11th aboard Heart's Histoire on Sunday. Take's ride was in second place for a large chunk of the race before showing fatigue late.

Guyon said, "We got stuck behind horses from about the last corner and couldn't find room to run."

"The pace was slow, and I tried to look for a space in the inside, but there was no room for us," Lemaire said.

He added, "The horse ran well but we were unlucky."

"He had a poor break [at the start] and the race didn't work out as we had liked," Murzabayev said. "A softer ground would have been better for this colt."


Getting to Know Vela Azul

Prior to the Japan Cup, Vela Azul had gained some experience this year on turf, competing in his first five races on the surface and collecting three wins on turf.


Trainer Watanabe discussed Vela Azul's development as a competitor on turf a few days before the Japan Cup.

"His turn of foot in the Kyoto Daishoten was even better than I'd thought it would be," Watanabe said, according to this JRA report. "When I'd first started racing him on turf, he hadn't been that much in tune with the rider. But jockey Mirai Iwata did a good job of teaching him racing and he's gotten good results since. And, from this year especially, he's physically a lot stronger too."

The trainer had high hopes for Vela Azul in the run-up to the race.

"We haven't seen everything he's capable of on turf with a long homestretch," Watanabe commented. "I think he has improved with the one race behind him after time off. Ideally, I'd like there to be a good pace and the ground a bit soft like it was in the Kyoto Daishoten."