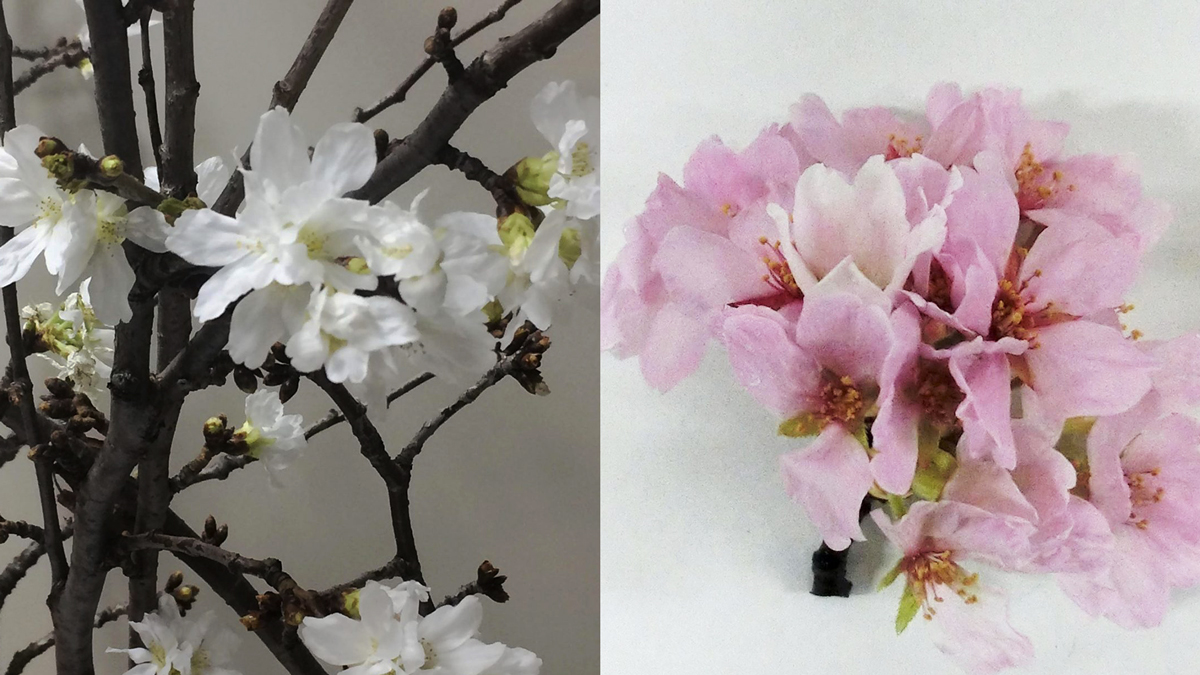 Cherry blossoms beautifully color the landscape of Japan at this time every year. Now, a research team at Hirosaki University in Japan’s northern Aomori prefecture has deciphered the mechanism by which the ubiquitous Somei Yoshino variety blooms into clouds of softly-tinted pink blossoms every spring.

The researchers found that blue and red LED lights used to illuminate the buds were the key to understanding this coloring mechanism. It may be possible, they said, to use this research to make cherry trees bloom into vividly-colored blossoms at will.

The Somei Yoshino variety originated in Japan by crossbreeding two native cherry trees, the edo higanzakura and oshima-zakura. At the end of the Edo Period (1603-1867), a gardener in the town of Somei in Edo (present-day Komagome in Tokyo’s Toshima ward) began selling Somei Yoshino trees nationwide. He named the variety “Yoshino-sakura,” after Mt. Yoshino in Nara Prefecture, which had long been known as a famous cherry blossom viewing spot.

Afterward, the name is said to have been changed to Somei Yoshino, bearing the name of the town where it was propagated and differentiating it from the cherry trees on Mt. Yoshino.

Somei Yoshino were planted nationwide during the high-growth period of the Showa Era (1926-1989). The variety has become so familiar to Japanese people today that it is Somei Yoshino that comes to mind at the mention of cherry blossom viewing.

Somei Yoshino are very fast-growing cherry trees with a canopy that can exceed 20 meters wide in only 20 years. It is particularly well-suited to hanami, or cherry blossom viewing, with dense blossoms engulfing the branches before its leaves emerge in the spring. For this reason, there are many famous hanami spots featuring Somei Yoshino throughout Japan.

Hirosaki Park in the city of Hirosaki, Aomori Prefecture, is one of them. The Hirosaki Cherry Blossom Festival, held over Japan’s annual Golden Week holiday from late April to early May, typically attracts more than two million tourists each year.

About 1,700 Somei Yoshino trees are planted in the park, their branches pruned throughout the year as part of regular maintenance. The pruned branches with little buds don’t go to waste, however. Residents who so request can take them home and care for them in flower vases, and enjoy an early hint of spring when they come into bloom. Yet, the color of these blossoms is quite white, compared to blossoms outside in the park.

Why are the colors different between those raised indoors and outdoors? Professor Osamu Arakawa of Hirosaki University’s Department of International Agriculture and Horticulture, a specialist in pomology (fruit trees) was inspired by the effect of ultraviolet light on apples. He speculated that the color differences could have something to do with light. He started an experiment using budded branches pruned in winter from Hirosaki Park.

Using light-emitting diodes (LEDs), he illuminated the swelling buds as they were about to open. Blue light LEDs were found to tinge the petals with a pink color. When red LEDs were applied with the blue, the pink color became darker. However, there was almost no change in color when the buds were irradiated only with red LEDs.

Altering the Coloring of Flower Petals

Blue and red lights are found in sunlight in abundance, but very little is found in fluorescent indoor lighting. For this reason, Professor Arakawa concluded that blue and red lights are both needed for the coloring of Somei Yoshino blossoms. If the branches are brought indoors, where such light is scarce, the petals will be whitish when they bloom.

The team aims to use genetic research to further analyze the mechanism by which blue and red light affects the coloring of Somei Yoshino petals. Professor Arakawa said: “It may be possible to adjust the hues of other sakura varieties, too, and grow beautiful pink sakura indoors at will.”

An official of Hirosaki municipal government’s Parks and Green Spaces Division explained the high hopes placed on the team’s research, saying, “It will help pioneer new methods of exhibiting Somei Yoshino, not only outdoors but also indoors.”