WAW!2022: Mainstreaming Gender into a New Form of Capitalism 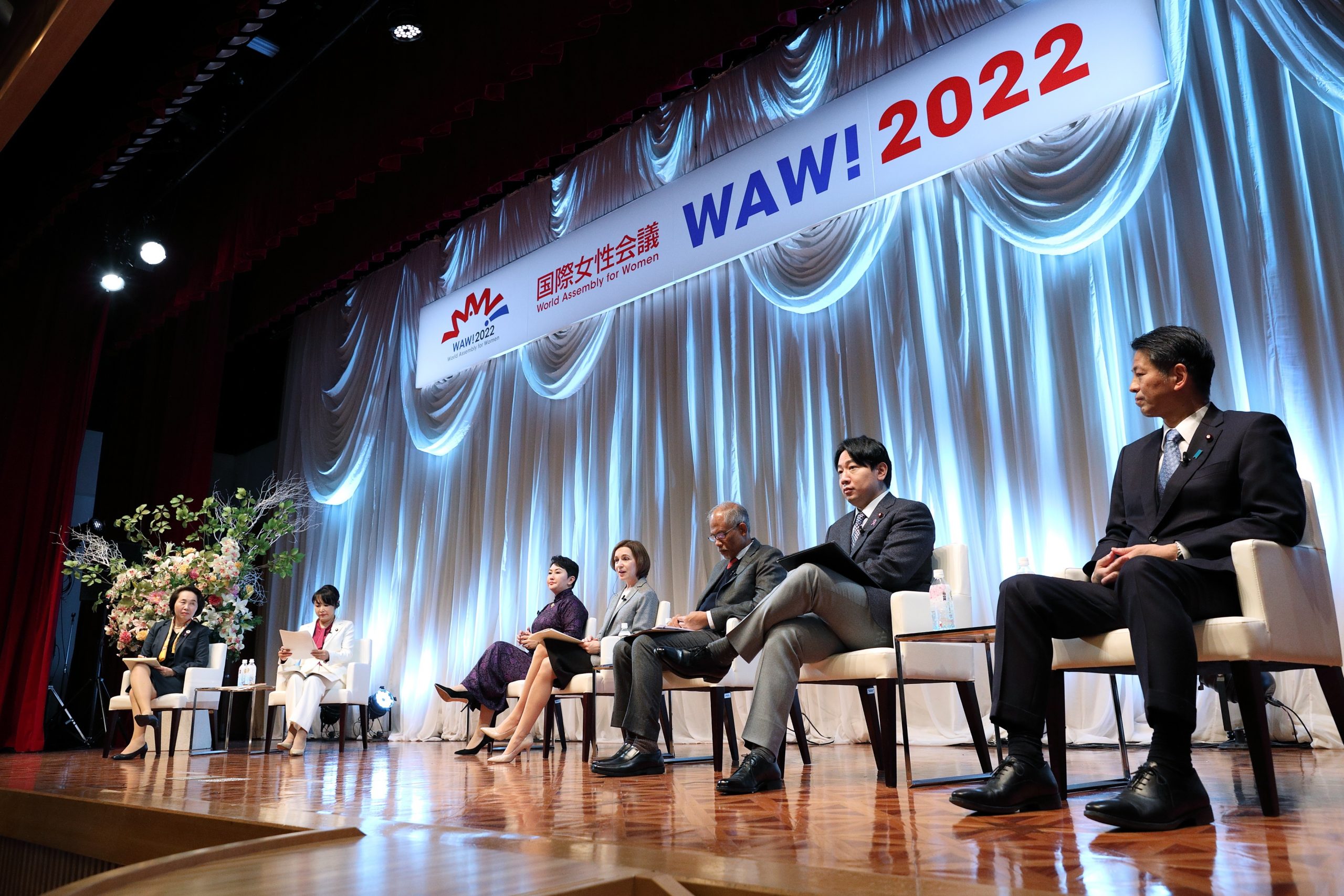 Speakers at the high-level roundtable on the theme "Mainstreaming Gender into a New Form of Capitalism." (© Ministry of Foreign Affairs of Japan)

Women's empowerment impacts all. At this year's World Assembly for Women, WAW!2022, this was the common message across the board.

While it is concerned with human rights and fairness, "Gender equality is also absolutely a matter of objective interest. Increased gender equality benefits all in society," said the first keynote speaker.

He was President Gudni Thorlacius Johannesson of Iceland. As the leader of the most gender-equal country for the past 13 years, President Johannesson's words held considerable weight. As stated in the Global Gender Gap Report 2022, Iceland is the only economy to have closed more than 90% of the overall gender parity and scores the highest in the political empowerment subindex.

This was further reinforced by Sima Bahous, the Under-Secretary-General of the United Nations and Executive Director of UN Women. Sharing some statistics from the McKinsey Global Institute, she said pursuing gender equality could add $12 trillion USD to the global economy by 2025.

Bahous also described gender equality as "the closest we have to a magic bullet for development and progress." And she highlighted the importance of women's empowerment in post-pandemic recovery.

This was echoed by Hillary Clinton in a video message. Clinton explained that gender equality was not merely a matter of justice, but "a political, economic, and social imperative."

When the opportunity to thrive is given equally, people do exactly that: they thrive. And this leads to economic growth, prosperity, and competitiveness, which the world urgently needs.

In his opening speech, Prime Minister KISHIDA Fumio built upon this theme. Women's economic independence forms "the core" of a new form of capitalism, built from a "virtuous cycle of growth and distribution," said the prime minister. He later received a special tie to mark his role as a HeForShe Champion.

As ideas and visions were exchanged between eminent women and men from around the world, it was clear that women have a crucial role to play in all fields, whether in the economy, politics, security, or the environment. By not empowering women, everyone loses out — regardless of gender.

The Global Pandemic and Gender Equality

Although the pandemic didn't undo everything, it showed how fragile the gains could be, explained Ursula von der Leyen, the president of the European Commission. According to von der Leyen, gender inequality in Europe grew for the first time in a decade, as more women quit work or gave up on their education to take care of family.

According to UN Women, 1 in 3 women experienced physical or sexual violence even before COVID-19. Recent data, including a briefing paper published by Oxfam, suggests that cases of gender-based violence also increased during the pandemic.

UN Women Goodwill Ambassador Anne Hathaway spoke passionately about the cultural biases that hinder women from pursuing their potential in her video message. For example, the mindset that child-rearing is a woman's job is equivalent to "taking advantage of women."

Her message was especially pertinent to Japan, which ranks 116th out of 146 countries in the Global Gender Gap Index 2022 released by the World Economic Forum.

According to OGURA Masanobu, Minister in charge of Policies Related to Children, Cohesive Society, and Women's Empowerment in Japan, norms and practices such as ​​long working hours and the seniority-based wage system formed during the era of mainly "full-time housewife households" have contributed to the wide gender pay gap in Japan.

Similarly, Masagos Zulkifli, the minister for social and family development of Singapore, called for the dismantling of archaic structures that force women to make a difficult choice between work and family.

The WAW! breakout sessions were structured to put the spotlight on the young generation. All sessions had at least one participant in their 20s, who was also the rapporteur to present the results of the discussions at the closing session.

The session on women's participation in peace and security welcomed Denis Mukwege, who was jointly awarded the Nobel Peace Prize with Nadia Murad in 2018 for their work as advocates for survivors of genocide and sexual violence.

Mukwege called for more women to be involved in decision-making processes for the protection of peace and security, including peace negotiations. He also emphasized that women and children are always the first victims of conflict and must be protected.

President Maia Sandu, who became the first female president of Moldova in 2020, urged girls and women to enter into politics as the "shortest way" to solve gender equality issues. Although it isn't an easy path, it was precisely how President Sandu brought real change to her country. Now, the Moldovan Parliament has a 40% gender quota for women.

Japan's PM Kishida also said in his opening speech that it is essential to reflect women's perspectives in systems and policies for the realization of an invigorated society.

In the session on women and startups, businesswoman Kathy Matsui shared her thoughts on female entrepreneurship. Matsui is a general partner of Japan's first ESG-focused global venture capital fund MPower Partners. Previously with Goldman Sachs Japan, she was also their first female partner in 2000.

Matsui argued that women may feel more reluctant to start their own businesses when their families and society are not tolerant of mistakes. She also raised information inequality as one of the major barriers and suggested that a centralized entrepreneurial platform providing key information such as tax, funding, and legal matters, could be a solution.

She backed her claim with a study by MPower Partners which showed that for every yen of funds raised pre-IPO, the market capitalization of female-founded firms at the time of IPO was 32% higher than male-founded firms.

Matsui's point was therefore that it's not for support out of sympathy, but because "it makes sense from an economic perspective."

WAW!2022 was impressive in scale, but more importantly in its inclusivity and diversity. It not only transcended national boundaries, but also generational barriers, and differences in experience.

Moreover, for the first time at WAW!, there was online outreach to facilitate remote participation and 22 satellite venues.

The tone of WAW! was one of humility in accepting that there was still a long way to go until the realization of a truly gender-equal world. But it was also one of hope. It was a message that much can be accomplished with commitment, innovation, and partnership.

This article is published in cooperation with the Ministry of Foreign Affairs of Japan.