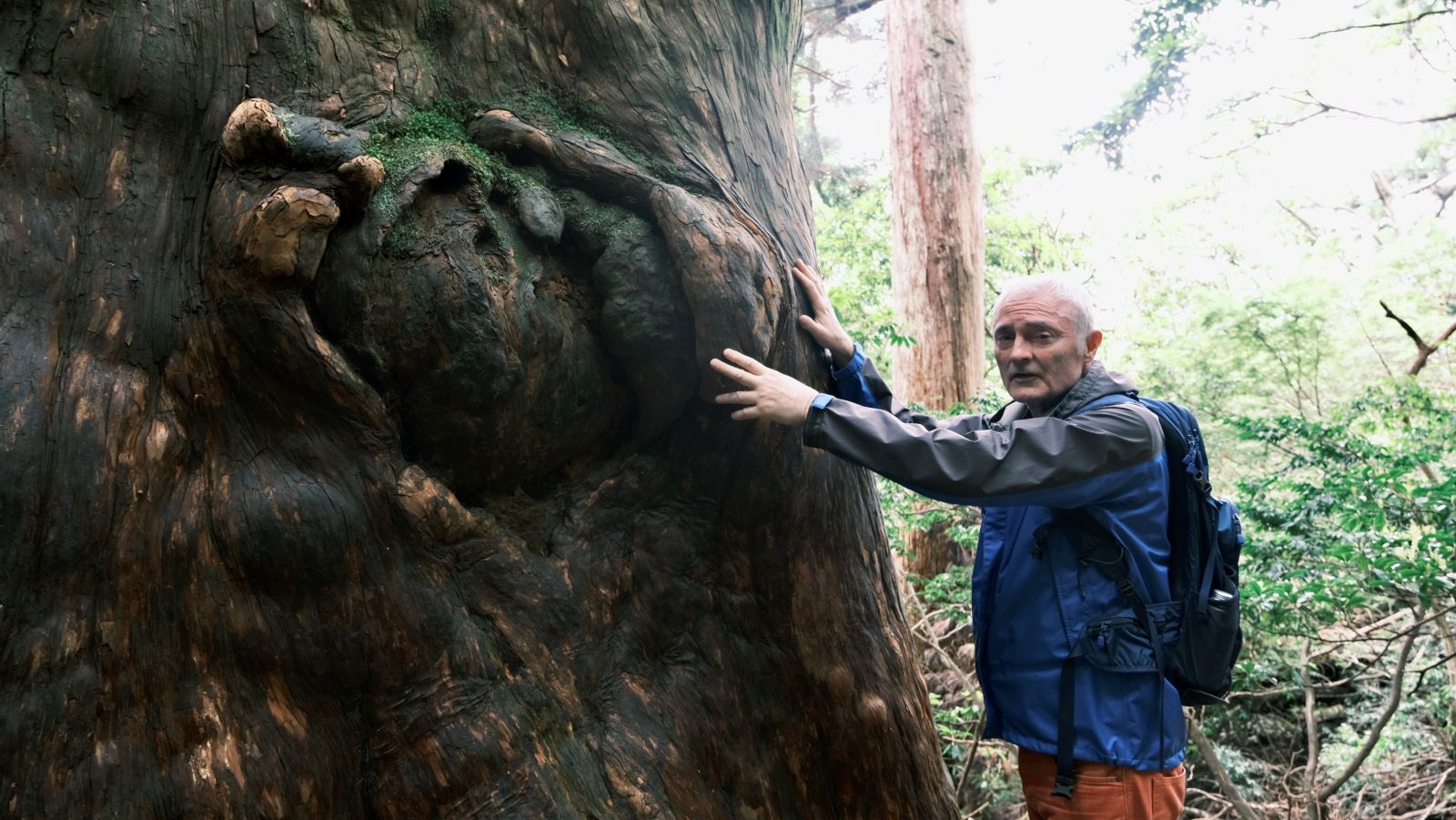 Meeting the Jomon Cedar up the mountain on Yakushima. (Photo by NW)

“My advice is to turn back right now,” said our guide. “We’re way behind schedule and you’re clearly having difficulty.”

What he said was perfectly true. My knees and ankles were barely functioning. The sole of my left climbing shoe was flapping loose, and one of my middle toes had lost all sensation.

Worse, I was finding it hard to move from moss-covered boulder to tiny wooden steps without lurching around like a drunk.

Of course, I felt deeply sorry for the guide, having to deal with someone like me. If I fell and injured myself, it would be his problem. Already this week he had carried an injured young woman on his back for hours. I’d probably be twice her weight.

We were on Yakushima Island, two hours by jetfoil from Kagoshima, which is the southernmost city in Kyushu.

This was one mission I was determined not to fail, no matter the cost in blisters, miscellaneous bruises, and damaged pride.

As it happens, luck was already on our side. Yakushima, thanks to its sudden elevation from sea-level, is the rainiest place in Japan.

As the locals say, it rains 35 days a month. Torrential downpours are common, leading to canceled flights to and from the tiny airport and canceled hikes for would-be tourists, who cannot access the mountain without a permit.

Entering the World of Hayao Miyazaki

Our trip took place bang in the middle of the rainy season, yet — miracle of miracles — on the day we had booked for our hike, not a drop of moisture fell from the sky. Deer gamboled. Monkeys chattered. It was like entering the magical world of a Hayao Miyazaki film.

In fact, the resemblance is no coincidence. The great anime creator came to Yakushima in the mid-1990s and used the ancient cedars as inspiration for the mystical forest scenes in his masterpiece, Princess Mononoke.

There are several possible hiking courses to follow, ranging from gentle inclines and well-marked paths to overnight stays on the higher reaches of the mountains, the highest in Kyushu, in order to see the sunrise.

For us, the moment of decision came at the Wilson Stump, named after British plant-hunter EH Wilson, who visited Yakushima in 1914.

All that is left of what must have been an enormous tree is a cavernous hollow the size of a sumo ring. The rest was delivered in 1590 to warlord Hideyoshi Toyotomi, who used it to rebuild a temple in Kyoto.

Inside the stump is a small shrine, a spring, and an aperture that, when looked at a certain way, looks like a heart. Gazing through it confers luck in love, or so they say.

Would it confer luck in climbing too, I  wondered. It’s from this point onwards that the going gets a lot tougher.

Fit people should be able to do the return trip to the Jomon Cedar in 10 hours. In the end, we managed it in 13 and a half.

For the last two hours along the trolley-car track, my feet were acting independently, without any instructions from my brain. Various joints threatened to come apart. I enjoyed every minute.

Was it worth it? Absolutely. Being in the presence of the Jomon Cedar is an unforgettable spiritual experience — both humbling and uplifting. That’s why so many people from all backgrounds and walks of life — including some like me who are in no shape to do it — make this pilgrimage.

Fortunately, the great tree-god was in a forgiving mood and chose to overlook my rashness.

How Old is This Tree?

The Jomon Cedar is so-called because it began its time on the planet in the Jomon era, which stretched from 14,000 BC to 300 BC.

Exactly how old is this tree? You would have to slice through the trunk to find out, and that cannot be done until the tree dies of natural causes — which may not happen for a long time to come.

The conservative consensus says it is “over 3,000 years old,” though more aggressive estimates have it at 7,200 years old. In the latter case, it would be older than Stonehenge and the oldest pyramids.

In the former case, it would have been around before Confucius, Buddha, Socrates, and King David walked the earth.

Like an aged human being, the Jomon Cedar bears the marks of its long life. The trunk is gnarled and lumpy and a large branch was torn off in a typhoon a few years ago. It’s not that tall at 25.3 meters, with a trunk circumference of 16.4 meters — the body shape of a rugby prop forward rather than a basketball player.

Slimmer, more elegant cedars have fallen victim to the elements and, most dangerous of all, human activity.

Something like 80% of Yakushima’s ancient cedars have been chopped down and converted into furniture and building materials for dwellings, shrines,and temples.

In the Edo Period (1603-1867), the people of Yakushima submitted their annual tribute to their feudal lord, the Shimadzu clan of Kagoshima, in the form of timber, rather than rice, which was hard to cultivate.

Then after the Great Kanto Earthquake of 1923, the Japanese government prioritized logging in order to build accommodation for the large number of people whose homes had been destroyed. There was a repeat after several of Japan’s cities were bombed flat in the last stages of the Pacific War.

The use of modern tools, such as electric saws, meant that tree-felling that would have taken weeks in the Edo Period could be accomplished in a matter of hours.

The government even established a logging village of 500 inhabitants half-way up the mountain, with a school, a post office and a barber. A “torokko” trolley car system connected the tree felling areas with the port, which was eight kilometres of distance and 1200 metres of altitude away.

Logging stopped in the early 1970s. Nothing remains of the village which once rang with young voices singing the stirring words of the school song. The area containing the most ancient trees is now a UNESCO designated World Heritage Site.

The lack of any conservation effort until then seems strange from our privileged perspective. But, as our guide put it, in hard times people come before plants.

Only when the lower and middle levels of Maslow’s hierarchy of needs have been satisfied does society concern itself with the higher levels.

Survival of the Ugly

Ironically, the Jomon cedar survived the two devastating phases of tree-chopping not because it was revered, but because it was considered valueless. Its wood was too old and crooked to support a temple roof or make a smooth table for a shogun’s concubine.

The same goes for the other venerable survivors – the hollow-trunked “Great King,” the “Mother and Child,” and the “Husband and Wife” cedars, two proximate trees whose branches have gradually fused together over the centuries.

Sometimes being ugly and uncooperative is a winning strategy.

Even so, being a cedar on Yakushima is a tough job.


Complex Climate of the Island

Unlike the nearby Tanegashima, which is mostly flat, the mountainous Yakushima is the product of an undersea eruption.

That gives it a highly varied climate – as warm as Okinawa at sea-level, as cold as Hokkaido at 1800 metres. Vegetation is stratified by elevation, with cedar and other trees competing in relatively narrow bands.

The volcanic rock means that trees cannot sink their roots deep into the earth. Instead, roots spread widely but in shallow ground, making the trees vulnerable to landslides, storms and heavy snowfalls. We saw several uprooted trees, like the 2000 year old “Old Man Cedar” that toppled a decade ago and now lies on its side further down the slope with its roots hanging forlornly in the air.

The Jomon Cedar still stands, dominating the area with its girth.  It may have lost a bough or two, but there is new growth on its upper branches.

Civilizations have come and gone while the wind troubled its leaves and its thick dark trunk got thicker and darker.

Will our civilization be any different? I would bet on the tree every time.

The pilgrims that come this far offer the tree-god “ichi rei” — a reverent  bow. All will return to their daily lives knowing they have seen something wondrous.