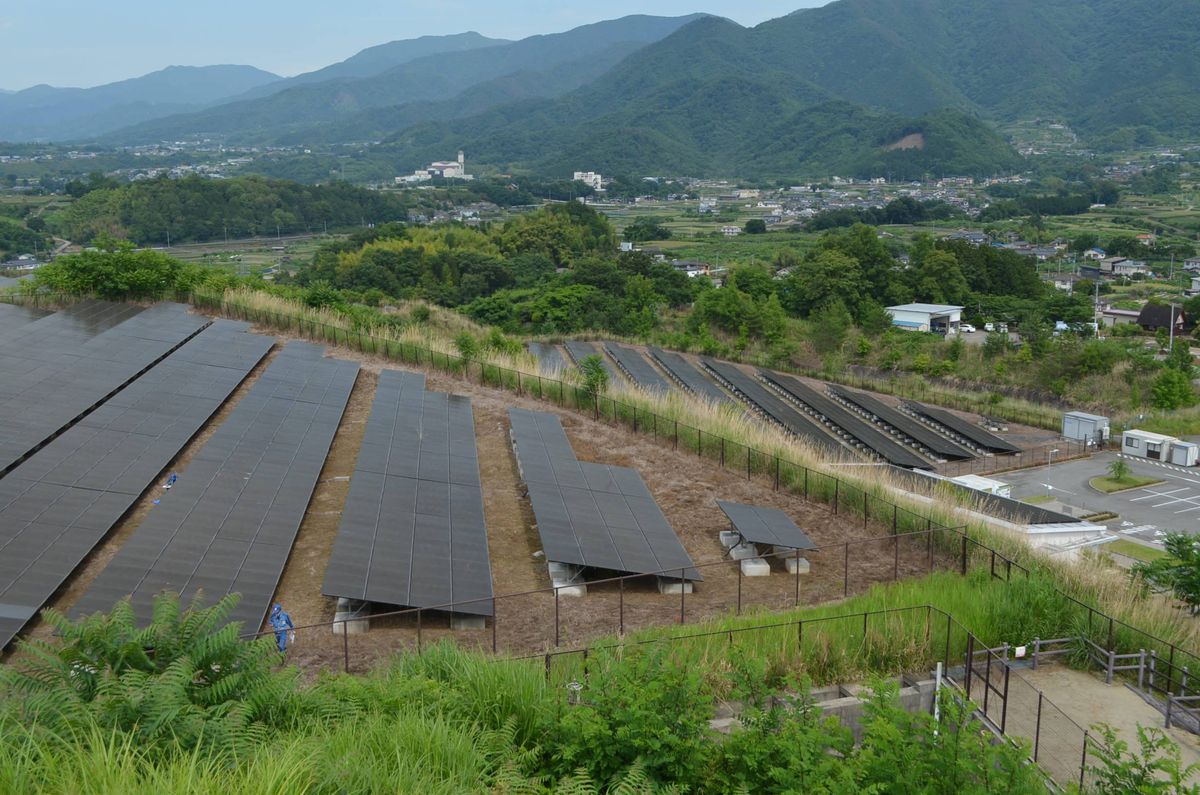 Yamanashi Prefecture’s Power-to-Gas (P2G) initiative that uses solar power to produce hydrogen, a fuel that could prove powerful for decarbonizing societies, has embarked on a new phase.

It All Started when the Bubble Burst

The core facility of Yamanashi’s P2G initiative is a large-scale solar power generation installation setup on prefectural land in Komekurayama in the southern part of Kofu City.

Originally developed to attract companies to Kofu in the early 1990s, the site’s construction coincided with the collapse of the bubble economy, resulting in no companies that wanted to move to the area.

The facility has long aimed not only to generate power, but also to explore various ways to utilize renewable energies, leading it to the present Yamanashi P2G initiative.

The chief aim of setting up the new initiative is to compensate for solar power’s weakness ー the fact that electricity can only be generated during the daytime.

Kazuya Miyazaki, head of the prefectural government’s Renewable Energy Systems Promotion Office, explains: “We have been working on several technology projects related to energy storage. Among them is a method of turning solar power into hydrogen and storing the energy.”

The P2G initiative, which began in June of 2021, uses the solar power generated in Komekurayama to produce hydrogen. It utilizes a water-splitting technology called the solid polymer type.

The system produces “green hydrogen,” using no coal or other fossil fuels. This hydrogen is then liquefied and stored in special tanks, which can be transported by trailer to meet demand in other locations.

It is already being supplied to supermarkets in the prefecture, where it is used in power supply as a fuel for fuel cells.

Next up for the prefecture is a new demonstration project by the Yamanashi Hydrogen Energy Society (H2-YES), a joint venture between the prefecture, Toray Industries, Hitachi Zosen and Miura Co.

Based on the solid polymer type water-splitting technology used in P2G, the project will develop a larger version of the water-splitting equipment, about 10 times the size of the current apparatus.

The large amount of hydrogen produced is expected to be used as fuel for boilers and other equipment. While heavy fuel oil and natural gas emit carbon dioxide when burned, burning hydrogen emits only water and steam. Converting boilers from fossil fuels to hydrogen could make decarbonization feasible.

Expectations are high for the new project. With few precedents on hydrogen as fuel, the new project was selected as the first project of the Green Innovation Fund, part of the national government’s plan to promote decarbonization.

The difference between the new demonstration project and the more conventional P2G is the way in which power is supplied.

P2G to date has run on the solar power generated at Komekurayama. But for the new demonstration project, power from various renewable energies will be supplied to the water-splitting equipment via a standard power grid. In addition to solar power, a diverse range of renewable energies can be used, including hydropower, wind power and geothermal power.

The project could eliminate the need to liquefy and transport hydrogen. Depending on the circumstances, only the necessary amount of hydrogen would need to be produced, removing the need for storage.

If successful, the project would contribute to lowering the cost of green hydrogen, one of the biggest challenges faced in decarbonization.

Miyazaki adds, “We also envision using green hydrogen for the cleaning of semiconductors and devices for which helium has been used to date.” In other words, Yamanashi Prefecture is moving forward on promoting diverse uses for hydrogen, believed to be a key player in decarbonization.