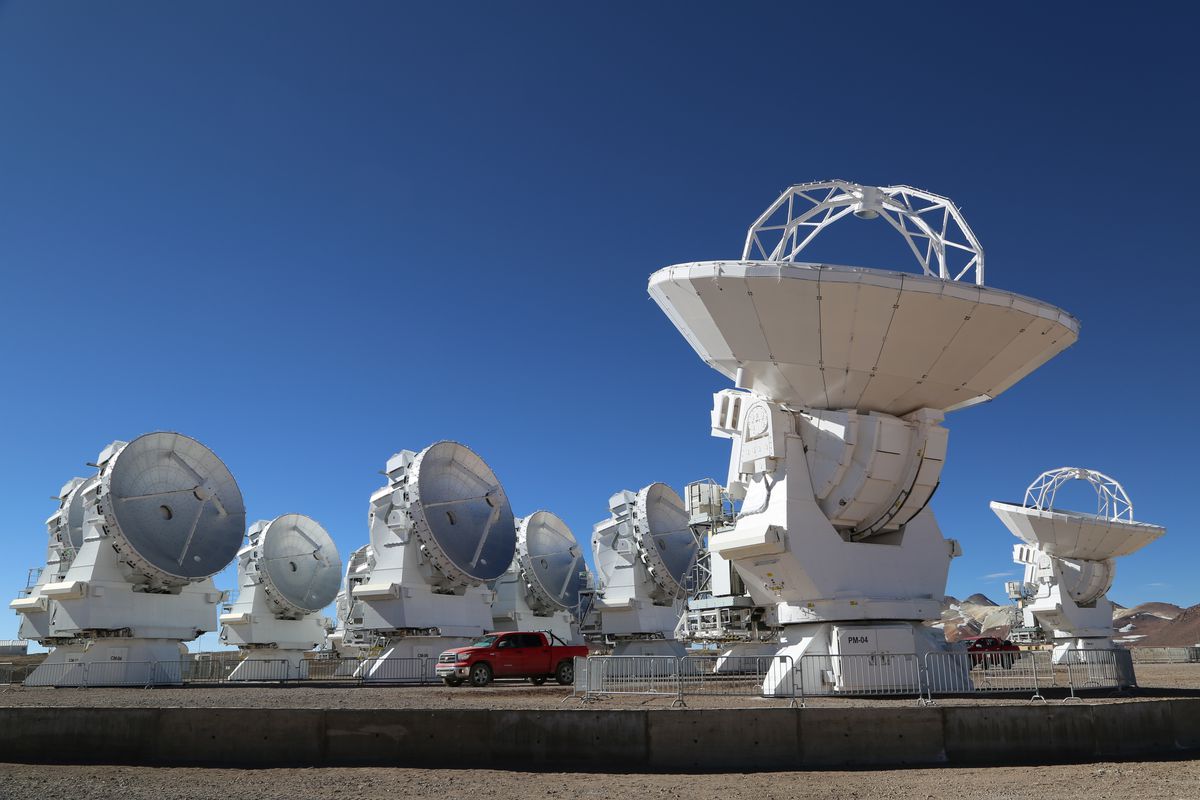 Research teams of the National Institute of Natural Sciences and the National Astronomical Observatory of Japan have found multiple hidden, dust-obscured galaxies from about 13 billion years ago in their explorations using the ALMA telescope in the highlands of Chile, in South America. One of these is the oldest observed galaxy. It’s discovery will be helpful in understanding the formation and evolution of galaxies in the early universe.

The ALMA telescope, which celebrates in 2021 the 10th anniversary of its use in scientific research, is used by astronomers worldwide and is considered an “ideal telescope.” It is indispensable for uncovering the mysteries of the universe, contributing for instance to the photographing of black holes in 2019. The recent discovery is also a result of the telescope.

The results were published in the online version of the scientific journal Nature.

Neither can be seen even with the Hubble Space Telescope, which has a high light sensitivity and can observe dark celestial bodies. The galaxies emit very little ultraviolet light and are obscured by dust. The research team initially observed 40 bright galaxies from near-infrared rays that existed in the universe about 13 billion years ago. The team found this hidden galaxy by chance while investigating the near-infrared rays radiated from the dust.

Yoshinobu Tadamoto, a specially appointed researcher at the National Astronomical Observatory of Japan Alma Project, was involved in the discovery. He said:

“We’ve been overlooking galaxies from the early stages of the universe. There may still be dust-obscured galaxies. In any case, this will lead to a broader understanding of the evolution of the universe and how galaxies grow.”

The ALMA telescope’s characteristics were a significant contributor to the discoveries.

Furthermore, when the aperture of the telescope increases, it is able to capture weaker light and radio waves. Located at the top of Mauna Kea in Hawaii, the Subaru Telescope, an optical, infrared telescope operated by the Subaru Telescope Hilo, is one of the largest in the world with a diameter of 8.2 meters.

In contrast, the ALMA telescope is a radio telescope located in the Atacama Desert at an altitude of 5,000 meters in northern Chile, South America. Consisting of 54 12-meter and 12 7-meter parabolic antennas, the entire construction has 66 antennas and spans a diameter of 16 kilometers. By combining all of the antennas, it forms a large telescope with a substantial aperture of 16 kilometers.

In relation to human eyesight, it achieves a visual acuity of 6,000. To put it in perspective, that is equivalent to distinguishing a 1-yen coin (20mm diameter) in Osaka from Tokyo.

According to Masaaki Hiramatsu, a lecturer at the National Astronomical Observatory of Japan, although visible light and near-infrared light from the dust-obscured galaxies cannot be observed, the ALMA telescope, which is a radio telescope, can observe waves with wavelengths of a few millimeters, and even shorter waves. Therefore, it is possible to catch weak radio waves such as millimeter-wavelength waves emitted from the dust covering REBELS-29-2 and REBELS-12-2.

Hiramatsu pointed out, “This discovery could only be made with the ALMA telescope, which boasts a high resolution.”

Closing in on Mysteries of the Universe

The official name of the ALMA telescope is the Atacama Large Millimeter/Submillimeter Array, and scientific observations using it began on September 30, 2011. It is operated with international cooperation from more than 20 countries, including Japan, the United States, and European countries, and will soon reach its 10th year of operation.

The telescope can observe the dust and gas that forms planets. So, in addition to studying the formation and growth of planets, it is also possible to analyze the organic substances contained in the dust and gas, which can lead to a better understanding of the origins of life.

Regarding this discovery, Hanae Inami, an assistant professor at the Center for Space Sciences, Hiroshima University, who is involved in the research, commented, “The results tell us that there is still much to learn in this vast universe.”