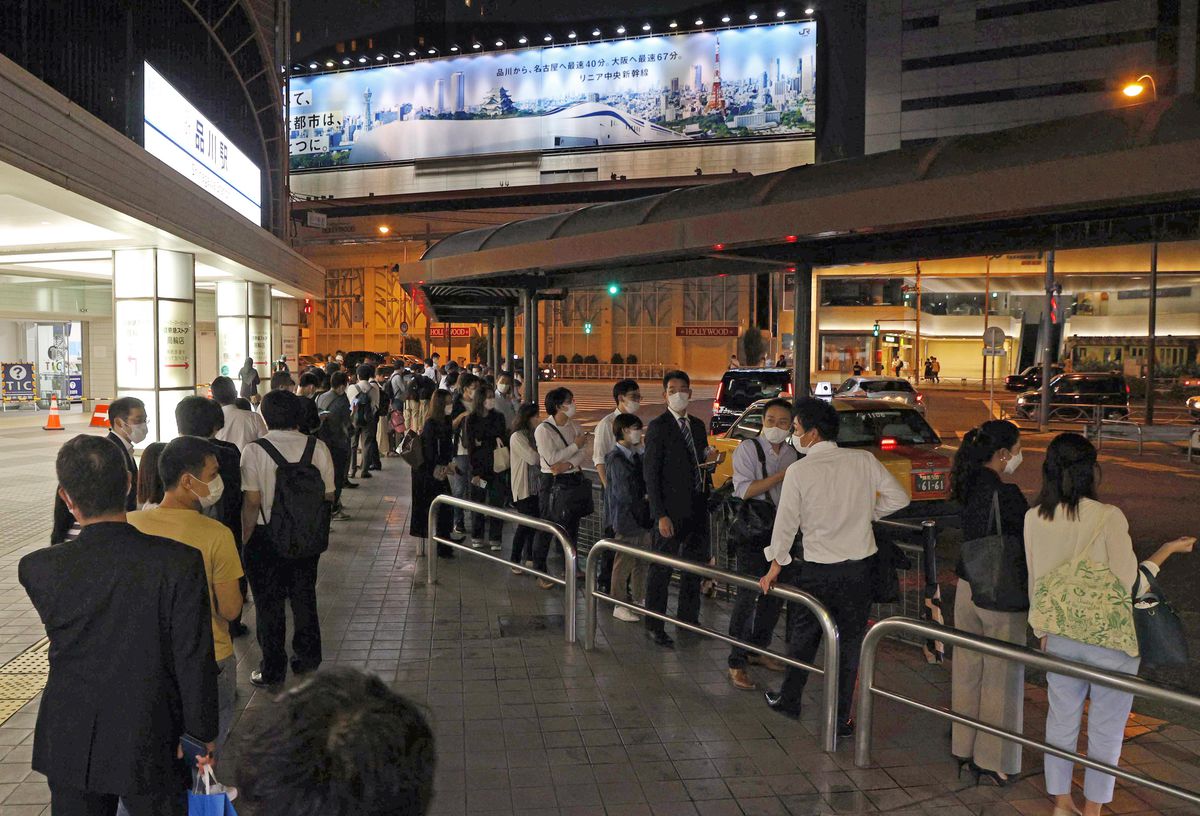 Tokyo JR Shinagawa Station after October 7, 2021, passengers line up for taxis into the morning of October 8, after quake brought trains and some other transportation to a halt.

A magnitude 5.9 earthquake on the Richter scale originating in northwestern Chiba Prefecture jolted a wide swath of Tokyo and surrounding prefectures on the night of October 7.

The quake hit Tokyo’s Adachi Ward, Kawaguchi City, and Saitama Prefecture’s Miyashiro town with the equivalent of a strong 5 on the Japanese 7-point seismic scale. Meanwhile, the rest of the Greater Tokyo region shook at an intensity of around 4 on the Japanese scale.

Damage to various urban infrastructure ensued, including a partially derailed passenger train, burst water pipes, suspension of railway operations, closures of elevated expressways, and power outages in some areas. There also were reports of several people stuck in elevators or sustaining light to moderate injuries.

In the early dawn of the day before, a magnitude 6.0 earthquake occurred off the coast of Iwate Prefecture in Northeast Japan. It was followed by a magnitude 5.5 quake off the coast of Osumi Peninsula, far away in Kyushu in Western Japan, in the evening the same day. The timing prompted the Japan Meteorological Agency to issue an emergency earthquake alert.

The full length of the Japanese archipelago is now in a phase of active seismic activity. Every member of the nation, every municipality, as well as the central government, needs to reexamine their earthquake disaster prevention measures and step up their preparations to further protect lives.

The October 7 quake was the most powerful temblor to strike the Tokyo metropolitan area since the Great East Japan Earthquake in March 2011, according to the meteorological agency. An earthquake measuring a magnitude of 6.0 occurred in 2005 in the vicinity of the Chiba area epicenter of the recent quake, the agency said.

The Tokyo area is built on a complex underground structure made up of the Pacific tectonic plate from the east and the Philippine plate from the south, which move and slide beneath the continental plate. Indeed, the latest major tremor in the metropolitan area occurred in the vicinity of the boundary where the two plates meet, according to experts.

A magnitude 7.0 or so earthquake focused comparatively near the surface directly beneath Tokyo ー with the potential for causing devastating damage ー is expected in the future. A temblor of that size is far larger than the one in early October.

The experience and lessons from October 7 should be used effectively in preparing the capitol region for such a massive quake. For example, the strength of the shaking in Tokyo’s Adachi Ward and Kawaguchi City, both far from the epicenter of the October 7 quake, is being attributed to the relatively softer ground at those locations, compared to other parts of the region.

Multiple epicenters are possible in the event of an earthquake beneath the Tokyo Metropolitan area. In any case, severe tremors accompanying the violent jolts are considered likely, elevating the need for prompt and thorough earthquake resistance efforts.

In areas where the recent earthquake created a sensation of greater intensity than the official levels, prompt examination of the ground and buildings affected should be carried out to understand why.

This time there were few injuries, although many people felt the danger. It is important to identify potential risk factors and take action to protect against damage from them in future earthquakes.

The disruption of infrastructure in the Tokyo region and beyond is inevitable in the case of a magnitude 7.0 or greater quake. The central government, local governments, and infrastructure operators should be constantly reviewing their emergency plans to minimize damage and speed recovery in the event of a disaster.