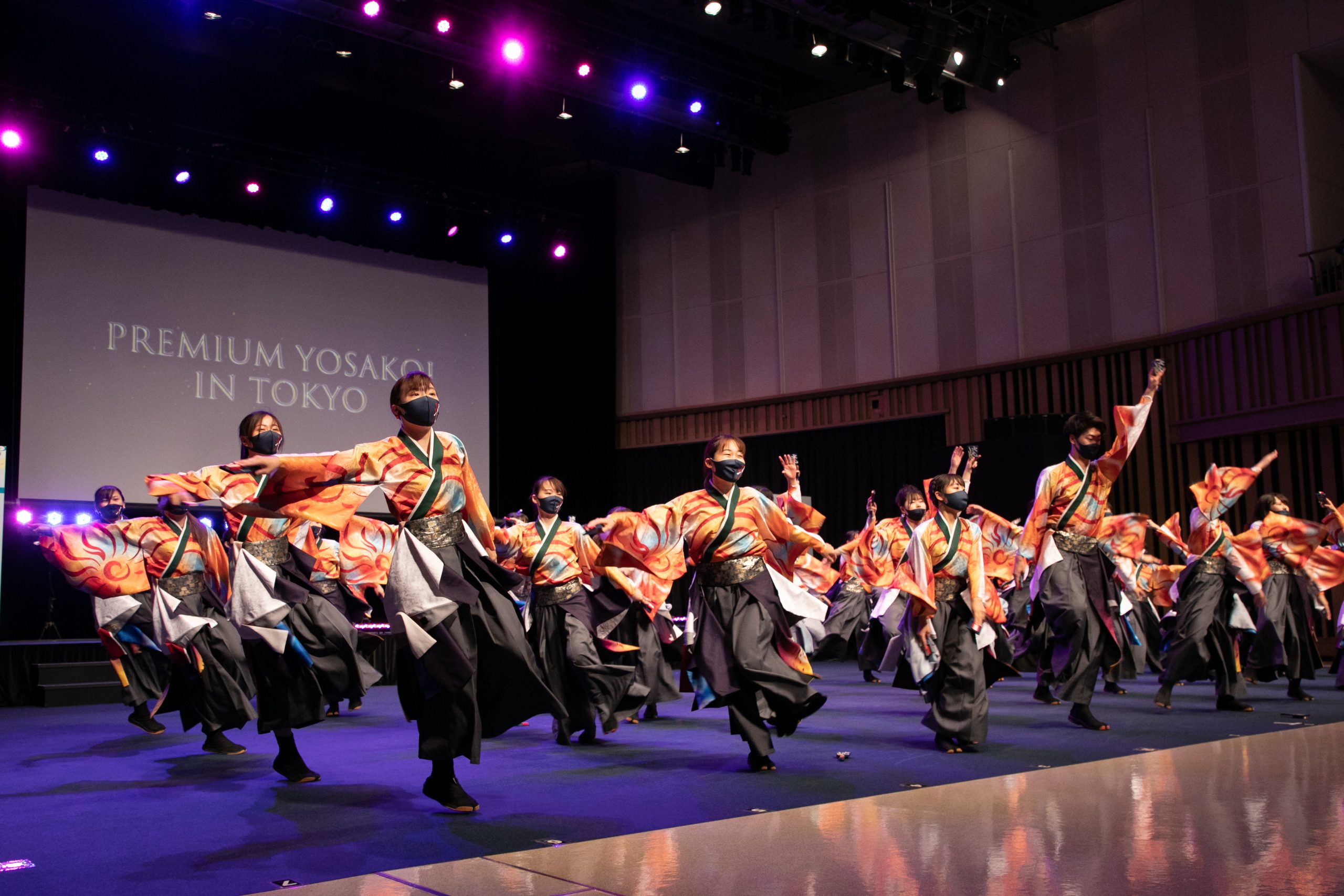 Premium Yosakoi in Tokyo (Photo credit: The Executive Committee of the 2020 'Supporting with Yosakoi' Project).

Not only is Kochi Prefecture in Shikoku blessed with one of Japan’s sunniest climates, it is also home to one of the best-loved festival dances: Yosakoi. Originating in Kochi in 1954, the dance is now performed in more than 200 places in Japan, and in 33 countries and regions internationally.

The Shinagawa Intercity Hall recently hosted Premium Yosakoi in Tokyo on July 4th. Originally the event was intended as an opportunity for teams from all over Japan to gather in Tokyo and share the excitement of live performances with an audience. However, with the ongoing COVID-19 pandemic, the organizers had to pivot to finding alternative ways to stage the event safely, yet without compromising the original vision of uniting people through Yosakoi.

JAPAN Forward spoke to event organizers and representatives from various teams to learn about the challenges involved with bringing the Premium Yosakoi in Tokyo to fruition, and to discover why Yosakoi can truly be called a “universal dance”.

You can check out the highlights of the event at this link on YouTube.

The basic rules for the dance are very simple. Dancers move forward while operating naruko, small wooden clappers that were originally used in Kochi Prefecture to scare away birds from rice fields. Some groups also make use of other hand held items, such as drums, flags, batons or fans.

The standard song for performances is “Yosakoi Naruko Odori”, composed by Eisaku Takemasa in 1954. However, he released the copyright of the song into the public domain, meaning that anyone can freely adapt and incorporate their own elements to create original music.

Rika Oka from the Kochi Department of Tourism was one of the coordinators behind Premium Yosakoi in Tokyo. According to Oka, the people of Kochi prefecture are very proud of the Yosakoi festival and it is entrenched in their daily lives, with children learning the dance in elementary school.

“One of the charms of Yosakoi is its diversity, as anyone in the world can share and participate in it,” says Oka.

Each team can add their own interpretation to Yosakoi. Today the dancing and costumes range from traditional through to flamboyant styles that wouldn’t be out of place in a modern J-pop video.

Teams Around the Country

Plans for Premium Yosakoi in Tokyo began four years ago, but the explosion of the pandemic in early 2020 caused many headaches for the executive committee and other stakeholders along the way. “As the event date approached, a state of emergency was declared in Tokyo, and there were times when we weren’t sure if we could even have it at all,” recalls Oka.

After careful discussion, the organizers settled on a combination event, with some teams participating live at the Tokyo venue, others via live satellite link from around Japan, and the rest sending in videos of their teams. All those performing on the day, whether in Tokyo or via satellite, danced in masks, and the entire event was livestreamed.

One of the teams that participated by satellite link was Yosakoisoran Hiragishi-Tenjin. They performed from atop Hitsujigaoka Observation Hill, a well-known spot in Sapporo, Hokkaido, which offers panoramic views. Sapporo played a significant role in helping to spread the culture of Yosakoi beyond Kochi.

Inspired by Kochi’s Yosakoi Festival, a group of students from Hokkaido launched the first Yosakoi Soran Festival in Sapporo in 1992. It combines elements of Yosakoi with Hokkaido’s traditional Soranbushi folk song, creating a unique fusion of two local cultures, and the festival has now grown to attract some two millions spectators each year in normal years.

Kousaku Ito is the Director of the Yosakoi Soran Festival Organizing Committee. He noted that while the members of Hiragishi-Tenjin had concerns about performing via live satellite link during Japan’s rainy season, all their time and effort were rewarded by sunny clear skies on the day.

“In view of the circumstances with the pandemic, we were all just very happy to be able to perform and be seen,” said Ito. “The world of festival dancing transcends language barriers. It would be wonderful if Yosakoi can serve as an opportunity to connect with people from all over the world.”

Kochi, the Birthplace of Yosakoi

Down at the other end of the country in Kochi, the birthplace of Yosakoi, the Truck Yosakoi team also took part via satellite link. Although the team only came together in 2015, they have already won honors at Yosakoi festivals both within Kochi prefecture and around Japan.

“After much discussion among our team and support staff, we decided to go ahead, taking measures so that everyone could participate safely,” said spokesperson Kohei Kawamura. “We were dancing in front of Kochi Castle during our performance, and we were very relieved that the weather cooperated! We were the only team from Kochi dancing live by satellite on the day, but everything came together and we had a great performance.”

Live Performances on the Day

One group that did get to perform at the Shinagawa Intercity Hall venue was the Dream Yosacoy Official Team. They are the official dancers for the “20th Dream Yosakoy Festival,” slated to be held in Odaiba and other locations in Tokyo this November. In recent years this annual festival has even spread to such international locations as New York, Singapore and Malaysia, among others.

Last year’s event was also affected by the pandemic. “Last November was the first time in the festival’s history that it was held without an audience,” explained Kenya Itokawa of the Dream Yosacoy Festival Global Promotion Foundation. “We redefined the festival, using digital technology such as video, extended reality and drones for the first time.”

The members of Dream Yosacoy were thrilled to have the chance to perform in person at Premium Yosakoi in Tokyo.  Itokawa said, “Yosakoi really is a festival for ‘universal participation’, transcending gender, age, disability, nationality and cultures.”

The universal nature of Yosakoi is exemplified by the Tentekomai team from Kochi. They were among a number of teams that sent in a video of their activities, which were shown in between the live performances. The team features a mix of participants with and without disabilities, and offers all members the opportunity to join in planning and management activities, as well in actual dancing.

Keiji Nakaya is the Chairperson of the “Tentekomai” Kochi Yosakoi Barrier Free Executive Committee. “Each of our wheelchair users, for example, teams up with someone who pushes their wheelchair—we call them ‘partners’ in Tentekomai. Together they perform as one unit, with the person in the wheelchair using their upper body and the partner dancing with their lower half.” In fact, any member of the team who is anxious about their ability to perform can be assisted by someone.

“I think people with disabilities often encounter obstacles in their daily lives, but participating in Yosakoi offers a comfortable environment, as there are no such barriers,” Nakaya points out.

Among all the teams interviewed for this article, the most original analogy for the power of Yosakoi surely comes from Mayumi Kimura, captain of the Bingo Barabara Yosakoi Odoritai from the city of Fukuyama in Hiroshima prefecture. Nicknamed “The City of Roses”, Fukuyama is known for its beautiful rose gardens and annual rose festival.

“We’re an energetic team of people ranging in age from seven to over 70. We want to help make our city bright and cheerful through Yosakoi — just like the million roses that bloom in May!” declared Kimura. This team also appeared in a video during the Premium Yosakoi in Tokyo.

Once it is safe to travel again, Oka from the Kochi Department of Tourism hopes that international visitors will be inspired to come and experience the charms of Kochi prefecture and Yosakoi for themselves. In the meantime, she recommends checking out the “Yosakoi Remix” YouTube channel for bilingual videos on how to dance Yosakoi, along with watching highlights of the Premium Yosakoi in Tokyo event online to see some of the top teams in action, commenting:

“I hope you’ll enjoy finding your favorite team and learning all about Yosakoi!”

Louise George Kittaka is a bilingual writer, university lecturer and cross-cultural specialist from New Zealand. She majored in Japanese and Economics at the University of Waikato, and has an MA in Intercultural Studies from SUNY Buffalo. She writes for various English media and contents platforms, and has contributed to numerous EFL study materials for the Japanese market. She also conducts cross-cultural training programs for families leaving or arriving in Japan on corporate assignments, and lectures at Shirayuri Women’s University. Whenever she has the chance, Louise loves going to sweet buffets, karaoke and travelling—both with her family and solo. She is obsessed with anything to do with the Aliens movies.