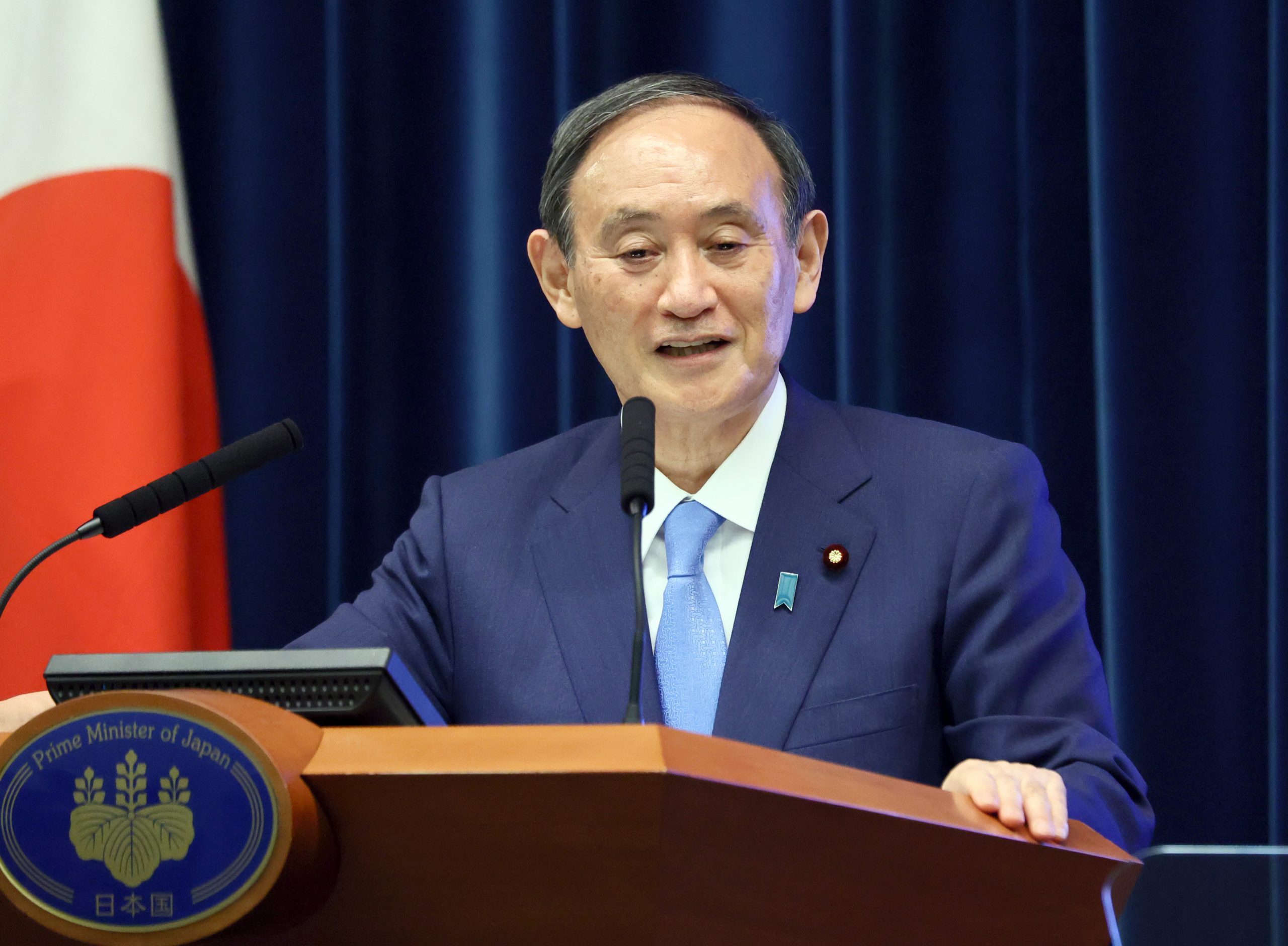 Japanese Prime Minister Yoshihide Suga in a Press Conference on June 17. PM Suga wears a blue ribbon badge daily to signal the importance of the abductions as an issue of Japanese sovereignty.

Recent happenings in an Osaka court make me wonder if we are still living in post-war defeated Japan.

The court case is taking place in Kishiwada City, Osaka Prefecture. A female part-time employee of Fuji Corporation Ltd., a real estate company, is seeking damages from the company and its chairman. She claims to have suffered mental anguish following the distribution in the workplace of materials that she says included discriminatory remarks against specific ethnic groups.

The Sakai Branch of the Osaka District Court, the court of first instance, issued a ruling in July 2020, ordering the company to pay ￥1.1 million JPY ($9,820 USD). Both the employee and the company appealed, and the case is now being heard by the Osaka High Court.

At the first hearing, the court banned anyone from entering the courtroom if they were wearing a blue-ribbon badge, a symbol of hope for the rescue of Japanese abducted by North Korea. The chairman of Fuji Corporation, who wears the badge on a daily basis, is suing the national government for damages, claiming that the badge ban violates the Constitution.

In the lawsuit filed against the company, one of the points of contention is whether the roughly 500 documents distributed to employees constituted “hate speech” (hatred/discrimination against specific ethnic groups), as claimed by the employee. These documents, distributed as part of an employee training program, included articles from the Sankei Shimbun and the magazine Seiron, as well as several essays by prominent intellectuals such as journalist Yoshiko Sakurai and the late Shoichi Watanabe.

RELATED: Letter to Megumi: Alone, I Ask Myself Over and Over ‘Why Can’t I Save My Daughter?’

What is difficult to understand in the ruling of the first trial is why the court did not examine the distributed documents individually. Instead, the court characterized them collectively as follows:

“Materials that mainly express political opinions and commentary, such as: strong criticism of the state and government officials of China, South Korea, and North Korea on issues such as territorial disputes, historical awareness, and the purchase of Japanese land by Chinese nationals and corporations; and insults of people of Chinese, South Korean, and North Korean nationality or ethnic origin, including Korean nationals in Japan, as well as the Japan Teachers Union and the Asahi Shimbun.”

The use of negative words such as “strong criticism” and “insults” gives the impression that all of the documents were discriminatory. The ruling found the “repeated and continuous” distribution of such documents to be “a significant insult to those of Korean nationality and ethnic origin and offensive to their sense of honor.”

The crudeness of the ruling, which lumped together criticisms of China and the Japan Teachers Union, which have had nothing to do with the Korean-national employee, characterizing all documents as negative, reminded me of the censorship carried out by the GHQ (General Headquarters of the Allied Powers), which occupied and ruled Japan.

The GHQ secretly censored newspapers, magazines, books, mail, and movies, repeatedly banning publication or deleting text. In November 1946, the number of items subject to deletion or bans reached 30. Criticism of Chinese and Koreans, along with the United States, the United Kingdom, and other countries, was also banned (Jun Eto, Closed Linguistic Space: Censorship by the Occupation Forces and Postwar Japan, published 2020).

At the same time, the Japan Teachers Union was formed in June 1947 with the merger of two teachers’ unions (one affiliated with the Communist Party and the other with the former Socialist Party). Both had been founded in December 1945 based on the GHQ policy encouraging the formation of labor unions.

The reemergence of GHQ policy was also evident in the appeal hearing, which again banned the blue ribbon badge. Likewise, from the second oral argument in April 2021, the Hinomaru badge was also banned. It was reminiscent of the GHQ’s ban on raising our Hinomaru national flag, which continued until New Year’s Day 1949.

Under the occupation rule by GHQ, our country lost its sovereignty.

When the blue ribbon badge ban in court was questioned in a session of the Diet, an administration official responded, “The blue ribbon is a symbol of the national movement calling for the rescue of abductees.” (House of Representatives Cabinet Committee on March 10, 2021).

The government recognizes the blue ribbon badge as an expression of the hopes and wishes of our nation’s sovereign people.

So why has a situation emerged that is similar to a time when our nation lost its sovereignty? Discussions on this issue should be continued.

RELATED: Prime Minister Suga, Acting Like Himself, Gets Down to Business with President Biden

(Find access to The Sankei Shimbun “Seiron” column in Japanese at this link.)