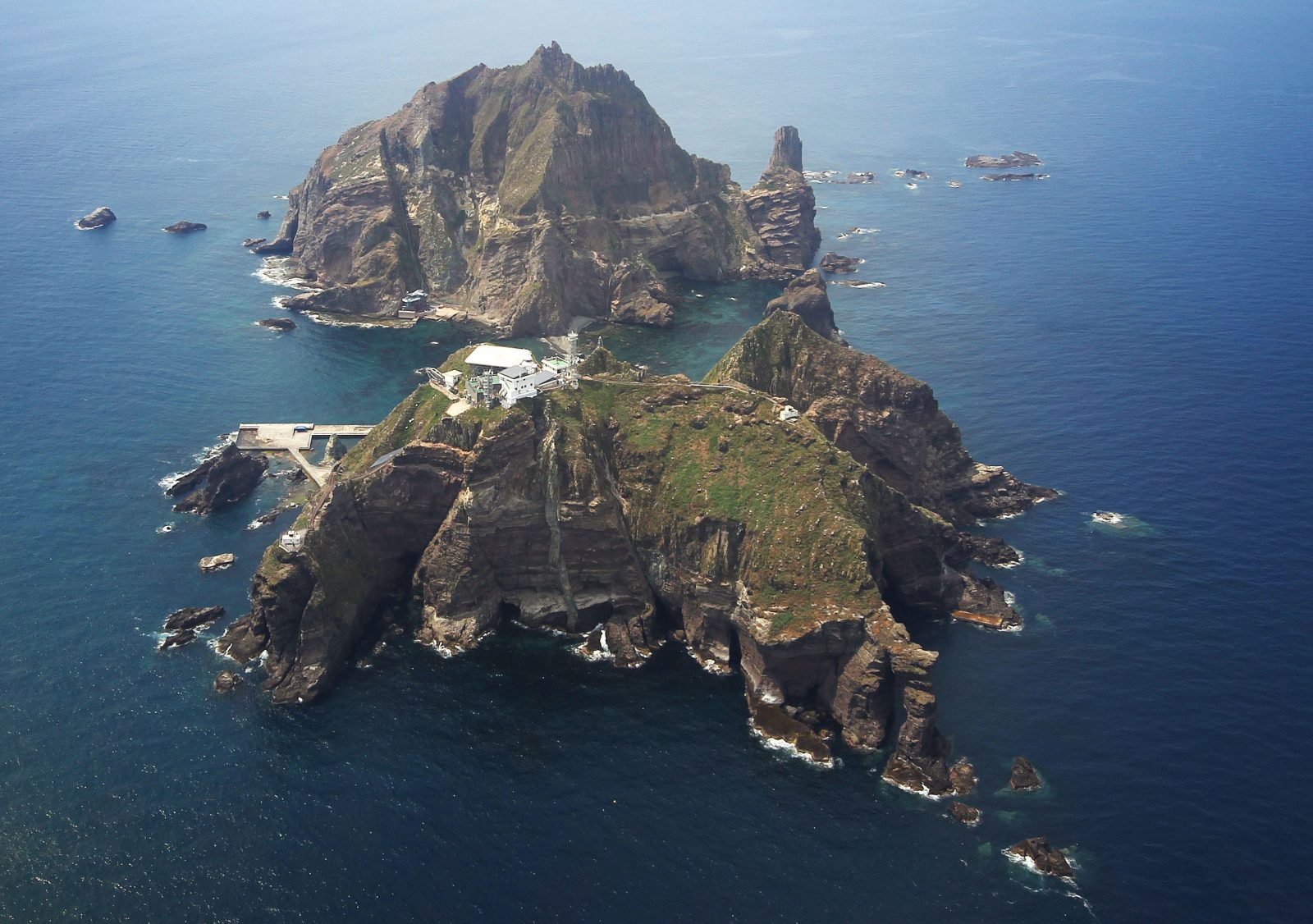 A 19th century British map has been found that clearly defines  the islets of Takeshima, (Okinoshima, Shimane Prefecture), as an integral part of Japan. The survey was found by Associate Professor Rikinobu Funasugi of Shimane University, an expert in historical geography. Currently the islets are illegally occupied by South Korea.

The map had been included in a prestigious world atlas said to have been dedicated to Queen Victoria (1819-1901) of Great Britain, according to the state-run university’s professor. While 19th century maps indicating Takeshima as Japanese territory have been found earlier in the West, the newly discovered map is seen as further reinforcement of Japan’s claim that the two Takeshima islets have been “under Japan’s sovereignty since the 17th century,” effectively countering the Korean side’s claim. 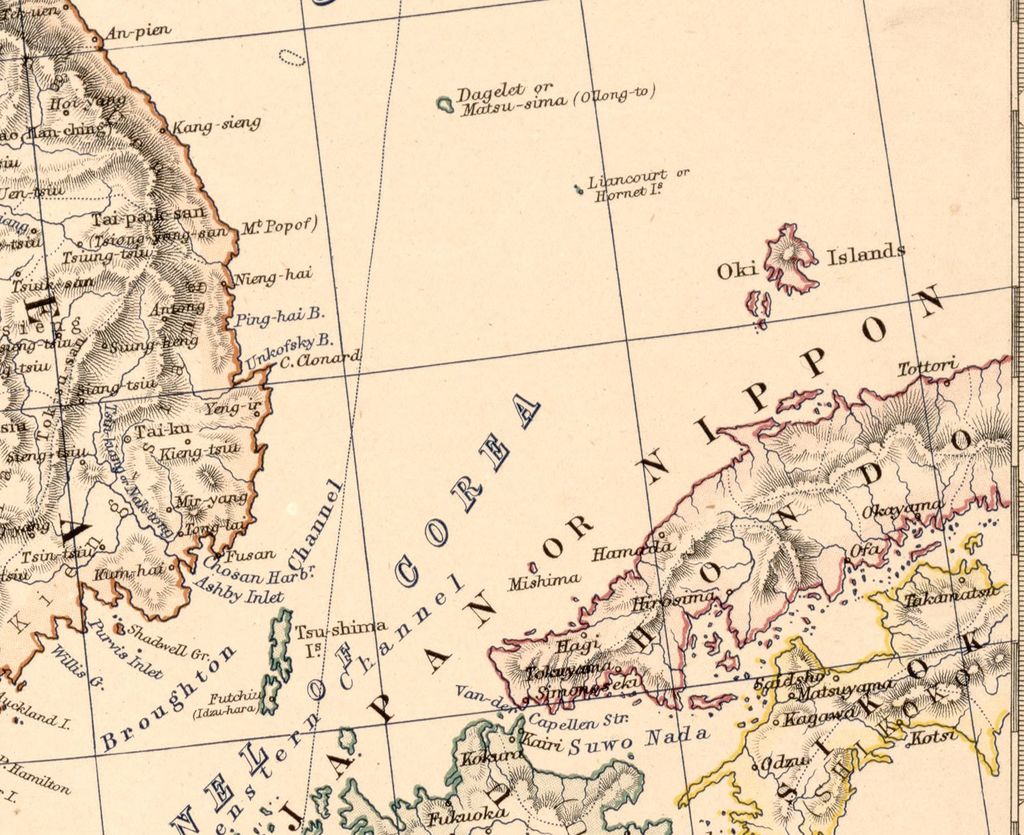 The Same Coloring as the Rest of Japanese Territory

The world atlas examined by Associate Professor Funasugi was The Royal Atlas of Modern Geography, created by British geographer Alexander Keith Johnston (1804-1871). The atlas is considered to have been first published in 1855. Associate Professor Funasugi obtained an 1881 edition at an antiquarian bookstore in Kanagawa Prefecture recently and scrutinized the collection of charts.

Takeshima was depicted on one of the group of 51 maps in the atlas, under the title “China and Japan.” The Takeshima islets were referred to as “Liancourt or Hornet Islands,” the French and English names for Takeshima. Worthy of note, the islets were painted in green, the same color of the island of Kyushu, distinctively different from Korea that was painted in brown, the Associate Professor said.

At the beginning of the atlas, Johnston, the author, is introduced as “Geographer Royal for Scotland” (where he was born), with the next page saying the atlas “is dedicated to Her Most Gracious Majesty Queen Victoria”.

Funasugi analyzes that “The title of the atlas reads ‘Royal Atlas’ which may have been because the Royal Family recognized Johnston’s accomplishment.”

He also confirmed that the atlas by Johnston confirming Takeshima as Japanese territory has been listed on the website of the U.S. Library of Congress.

Among them is a world map drawn up by German cartographer Adolf Stieler (1775-1836), which shows the demarcation line between the Korean Peninsula and Takeshima written in Western names, defining Takeshima as Japanese territory. The demarcation has been confirmed in the world map’s multiple editions.

A 1891 report by the then U.S. Coast and Geodetic Survey (now part of NOAA,  the  U.S. National Oceanic and Atmospheric Administration), compared the work of Stieler and Johnston, saying: “The two atlases are good rivals. Both have excellent accuracy.”

Researchers on the South Korean side have long claimed that “Western maps from long ago have classified Dokdo [the Korean name for Takeshima] as part of Korean territory”. But they are said to have deliberately excluded maps, including the one by Stieler, that are adverse to their arguments.

Senkakus Too Shown as Japanese Territory

Johnston’s atlas also applied the same yellow color used for Okinawa Prefecture when coloring the Senkaku Islands, a part of Ishigaki City (Okinawa Prefecture), indicating them as an integral part of Japanese territory. The group of islands were abruptly claimed by China, beginning in the 1970’s.

The Meiji government of Japan incorporated the Senkaku Islands into Okinawa Prefecture through a Cabinet decision in January 1895 during the Sino-Japanese War, after conducting extensive research to determine that the islands were not under any other country’s rule.

The British map confirmed this time was produced before the 1894-1895 Sino-Japanese War. It is also a reference that overturns China’s argument that Japan “plundered the Senkakus through the Sino-Japanese War,” according to experts.

Associate Professor Funasugi pointed out that the atlas “is a valuable resource that shows how Takeshima and the Senkaku Islands were perceived internationally in the 19th century.”

(Access to the article in Japanese can be obtained through this link.)