3 Ways the US, Japan, Should Handle China’s Island Building

As China continues with its policy of expansionism in the region, combining military intimidation and economic inducements toward its neighbors, we publish in 3 parts an instructive interview by the Sankei Shimbun’s Washington bureau chief, Yoshinari Kurose with Dr. Toshi Yoshihara.

In the South China Sea, China reportedly has almost completed its militarization of man-made islands. What is your take on this?

Some observers have concluded that the Chinese have presented a fait accompli to the international community. Some people have even declared “game over” for the United States in the South China Sea. These claims are premature.  Frankly, they exaggerate China’s position.

In a long-term competition, the game is never over. The game continues in an ongoing interactive process. I see China’s consolidation of its position in the South China Sea as the initial steps in a longer term competition between itself and the United States.

Adopting a long view prevents observers to narrowly focus on the island building activities. A larger great power competition is emerging between China and the United States and the island-building campaign is symptomatic of China’s advances in the region.

It is worth acknowledging, however, China’s engineering ingenuity. The tremendous dredging activities that enabled Beijing to create these manmade islands demonstrate that China has emerged as an infrastructure superpower.

But, the game is not over.  The game, I would argue, has just begun. 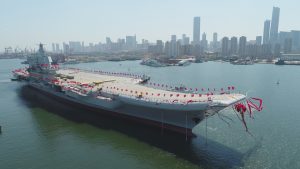 It doesn’t mean that the South China Sea has fallen into China’s hands?

I don’t think so. But, there are trends that worry me. First, China now has a strategic foothold in the heart of the South China Sea. Fifteen years ago China had a modest presence there. China seized Mischief Reef in 1994 and took the Paracel Islands in 1974.    The seizure of Scarborough Shoal in 2012 and the subsequent island building have enabled China to position itself for a substantial presence.

Second, it is worth thinking about how these islands fit into China’s military strategy.  It is unhelpful, in my view, to downplay the military value of the islands and to assert that the islands will not pose tactical or operational challenges to the United States.  Some observers casually claim that the islands are very vulnerable to U.S. long-range precision strike systems and that the U.S. military could handily eliminate the threats based on those islands at the outset of any conflict.

I disagree. Imagine China deploying very capable anti-access/area denial weapons on the islands.  The weaponry would boast sufficient range to furnish interlocking, mutual support amongst the islands. Moreover, China could provide a larger defensive umbrella over these islands with longer range anti-access weaponry from the Chinese mainland, from Hainan Island, and from the Paracel Islands. An interlocking, integrated set of anti-access defenses could be quite formidable.

The islands should also be understood within a larger strategic context. The conditions that would warrant a military attack to neutralize Chinese forces on the islands would likely be associated with some type of great power conflict between China and the United States.

While we may assign a very low probability to such a conflagration today, it still behooves us to think through that kind of a scenario.  Such a scenario might involve a conflict over Taiwan that draws in the United States.  In such a hypothetical situation, the islands could impose opportunity costs on the US military.

Suppose an American response to a cross-strait conflict required maneuver through the South China Sea and to do so required a campaign to eliminate the threats on the islands.  Fighting through the heavily defended, interlocking island defenses could require effort that comes with added costs.  Think about it.  Every asset the United States employed to neutralize the manmade islands would represent one fewer asset that could have been used more profitably against other more valuable targets.

These opportunity costs could potentially be quite large.  Consider the sheer scale of the largest artificial islands. The perimeter of Mischief Reef is comparable to that of the area comprising the District of Columbia.  A few pinprick strikes would not suffice to neutralize such a threat.  Again, consider that every cruise missile devoted to striking a manmade island would be one fewer missile that could have been fired against more important targets. 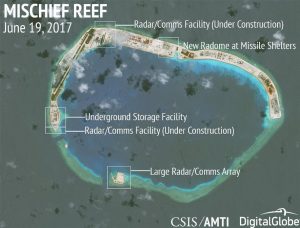 These islands thus impose opportunity costs on the United States.  They, at a minimum, add operational burdens. This is perhaps one way to think about the military value of those islands.

Beyond the military value of the islands, China and the United States are also involved in a contest over principles, including the principle that claimants refrain from unilaterally changing the status quo.  China may be the worst offender.

There has been a tendency to fall back on moral equivalence: since other rival claimants have similarly built up their islands in the South China Sea, China is simply responding to others’ actions. But the sheer scale of China’s buildup undermines this moral equivalence.

Moreover, China has made a variety of ambiguous and excessive claims in the maritime domain, including the “Nine Dash Line” and China’s interpretations of the jurisdictional scope of the Exclusive Economic Zone.

These claims worry the United States because they challenge the larger US-led liberal international order.  China’s claims about its prerogatives extending from the islands worry not only the United States, but also Japan, other allies, and friends in the region.

And, in reality, the islands are there.  And they are claiming their Nine Dash Line, and laying out all of these claims regarding the islands.  The thing is, what are you going to do?

Consider China’s gray zone tactics, involving the use of its coast guard, maritime militia, and so forth.  The key point is that these tactics derive their coercive leverage from China’s conventional military force.

China’s coast guard can intimidate rival claimants because the Chinese navy lurks just over the horizon. If China’s weaker neighbors conclude that they cannot—or are not willing to—climb the escalation ladder should deterrence fail, then they are more likely to back down in the face of Chinese paramilitary coercion in peacetime confrontations.

Conversely, the United States and its allies can dampen the intimidation factor of China’s non-military instruments of seapower by credibly demonstrating that their deterrent postures rival, if not exceed, China’s conventional military power.

Conventional deterrence thus still underwrites the push and pull of this competition between China and the United States.

The longer that we can convince the Chinese not to roll the iron dice, the better chance the United States and other stakeholders of the liberal international order have to shape Chinese behavior.

Second, the frontline states in Southeast Asia and Northeast Asia must continue to bolster their capabilities to deal with Chinese maritime coercion.  Japan, of course, boasts a powerful conventional military and coast guard.  But some of the players in Southeast Asia lack capacity.  Capacity building is clearly a priority. At the same time, mutual support among the frontline states is critical.  Provision of capabilities by Japan to regional partners should continue and should be encouraged. 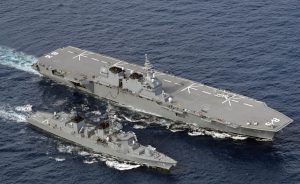 Greater regional cooperation to enhance maritime situational awareness, including the pooling of surveillance capabilities, to get a better sense of Chinese activities in the South China Sea would enhance stability.  Increasing transparency is thus another worthy objective.

Third, the legal and normative aspects of the competition should be strengthened. The Chinese have completely ignored the Permanent Court of Arbitration’s [PCA’s] ruling in July 2016. But, the ruling retains substantial value to the United States. For instance, the ruling provides the parameters for judging and exercising seafaring rights.  At the same time, it provides a basis to challenge Chinese claims that run counter to the ruling.

In this context, the United States could have done more to exercise its rights—indeed, to exercise those rights to the maximum limit allowed by international law—following the ruling. To me, it was a real missed opportunity.

The United States missed the opportunity to sharpen its narrative and to tell a more coherent and compelling story about the U.S. position following the ruling. Instead, we muddled the message by engaging in activities that might have been construed as premature concessions to Chinese claims.

This muddled messaging may be attributed, in part, to risk aversion and to fears of provoking China.  For example, the freedom of navigation operation near the Paracel Islands in October 2016—described as a “non-provocative maneuver drill”—caused as much confusion as it did to clarify the U.S. position. To me, the United States needs to be unambiguous because everyone in the region is watching.