A Case for Translating the 'Manyoshu', Japan’s Oldest Poetry Collection 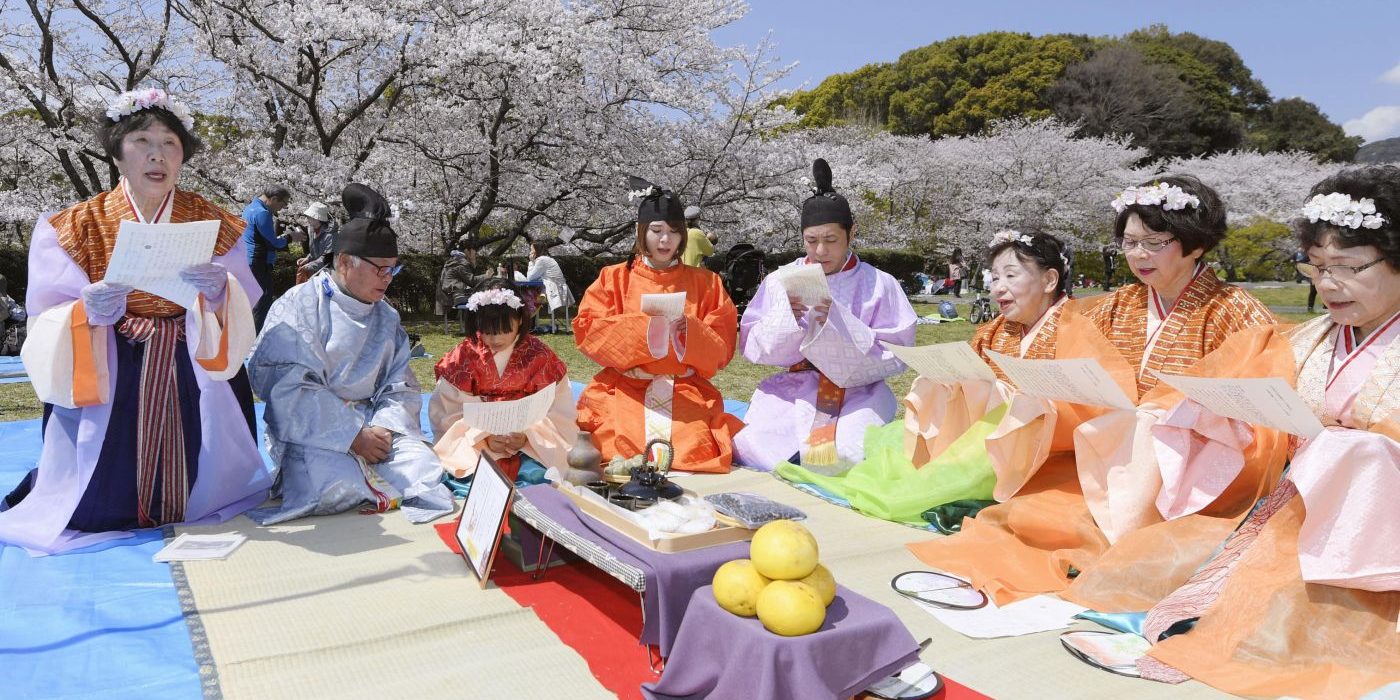 The initiative, involving more than 4,500 poems, needs several hundred million yen to accomplish. It offers unequaled access to the spirit of the Japanese people in ancient times.

May 2019 saw the enthronement of a new emperor and the advent of the Reiwa era. The name reiwa, meaning “beautiful harmony,” was taken from the Manyoshu, the oldest collection of Japanese poetry. That marked the first time that a reign name in Japan had not been chosen from one of the Chinese classics, and its selection has sparked new interest in the Manyoshu itself.

The Manyoshu, which consists of more than 4,500 poems in 20 volumes, offers unequaled access to the spirit of the Japanese people in ancient times.

Increasingly, there is a feeling that the time has come for a complete, authoritative English translation that will capture the beauty of the original poems and make them available for enjoyment by the entire world.

However, the scholarly work and financial costs to accomplish that goal are staggering. As a result, plans are starting to be worked out to link understanding of the Manyoshu to the promotion of local tourism.

A New Manyoshu Translation for a New Era

Peter McMillan is an Irish scholar of Japanese literature who has lived in Japan for many years. He received an M.A. in philosophy in Ireland and a Ph.D. in English literature in the United States before going on to do research at such famous universities as Princeton, Columbia, and Oxford, and serve as a part-time lecturer at the University of Tokyo. He is also an accomplished printmaker and poet in his own right.

Thanks to his love of Japan and hard study, McMillan has developed into a crack translator of ancient Japanese literature. His translation of the Ogura Hyakunin Isshu (One Hundred Poets, One Poem Each: A Translation of the Ogura Hyakunin Isshu, Columbia Press, 2008) won the Donald Keene Special Prize from the Donald Keene Center of Japanese Culture, and several other translation awards in Japan and the United States. He also translated the Ise Monogatari (Tales of Ise, Penguin Classics, 2016) into English.

McMillan thought that for his next project he might tackle the formidable job of translating the Manyoshu into modern English that will capture the feeling of the original. Nevertheless, the sheer size of the collection was intimidating.

What finally motivated him to take the plunge was the fact that, after then-Chief Cabinet Secretary (now Prime Minister) Yoshihide Suga announced on April 1, 2019, that the Japanese government had chosen Reiwa (a word found in the Manyoshu) as the new era name, interest in the ancient classic surged overnight.

Taking advantage of the newfound interest, McMillan chose 100 poems from it for translation into English, which were included in the Japanese book with English translations of the poems, Eigo de Ajiwau Manyoshu (Appreciating the Manyoshu in English), which was published as a Bunshun Shinko paperback in December 2019.

As for why he felt compelled to translate the Manyoshu into English, McMillan explained that he was taken by the comment of a certain foreign ambassador in Japan that “if Japanese literature really is superb, it should receive more recognition throughout the world.”

That comment made McMillan consider how few first-rate translations from Japanese were available.

“It (the Manyoshu) is extremely important if you want to understand the deepest strata of Japanese culture. It represents the very origin of Japanese literature, when people started expressing their personal feelings in poems written in Chinese characters,” McMillan explained.

“It was studied by later generations, and remains an important work of world literature with an appeal that transcends the age it was produced in. However, there is no standard English version and many foreigners do not even know it exists,” he added.

The Manyoshu is the oldest collection of Japanese waka poems. It is written entirely with Chinese characters and includes poems composed over a roughly 130-year span from the later half of the seventh century.

During that period, the poems were compiled and edited into the form we have today. Although the majority of poems in the Manyoshu were composed by members of the ruling class — including the Emperor, members of the aristocracy, and officials — it also contains poems written by members of various other classes of society. They include poems written by soldiers stationed as coastal guards in Kyushu and members of their families, as well as folk songs from the then still undeveloped eastern Japan, including the Kanto.

McMillan felt that in many respects the true spirit of the Japanese people had not been correctly conveyed to people around the world.

“By reading the Manyoshu we can enjoy a glimpse of the culture, society, and lifestyles of ancient Japan since it depicts how in their lifestyles and religious beliefs people were integrated with nature,” he explained.

“The book is infused with the spirit of the Japanese people and deeply colored by the original background to Japanese culture, so it has the ideal contents for explaining the essence of Japanese culture to the world,” he said.

McMillan also believes that if the Manyoshu became well known overseas, it would become part of the universal basic curriculum university students in foreign countries are expected to be familiar with.

Not only that, he believes that the time is ripe for the Japanese people to reappraise their own culture, which would lead to greater love of country and more desire to preserve nature.

Studying the Manyoshu via the vehicle of English could also improve people’s ability to disseminate Japanese culture through English. “Such a book might also be used as study material for learning English,” McMillan said hopefully.

Nevertheless, despite the fact that the Japanese government expressed interest in a project for the translation of the entire Manyoshu into English, with the arrival of COVID-19 in Japan, it is now unclear whether the necessary financial support will be available.

Translating the entire collection into English would require an enormous investment in terms of time, labor, and money. That is because it is no easy task to replace the original Japanese with an English equivalent yet retain the nuances.

For example, one poem refers to the shio, meaning “the tide.” However, the Chinese characters used mean “four jewels.” So here the poet creates a scene of drops of water in the tide shimmering like jewels. Translating shio as simply “tide” therefore does not convey the full image. “Glittering” needs to be added to make it “glittering tide” in order to accurately convey the emotions of the poet.

It is estimated that a complete translation into English of the Manyoshu would require sustained collaboration among around 10 specialists, who not only can comprehend such subtleties of a Japanese language that was very different from today’s modern Japanese, but also offer explanation of the text and its background, as well as points regarding the translation.

In light of the large number of poems to be translated, it is believed that such a mammoth, complex endeavor would require several hundred million yen. And when related tasks are added, the estimated budget balloons even more.

Despite that hurdle, work on the project to the extent possible under the current budget is proceeding through the cooperation of Tomohiro Shigeno, a junior associate professor (full-time lecturer) in the Department of Japanese Literature and Culture at Musashino University.

As part of the effort to cover costs, in addition to crowdfunding, organizers are looking at ways to tie together local tourism resources, so that visitors may experience first-hand the places alluded to in the Manyoshu. The plan is for collaboration with local areas, including in terms of financial support, while drawing on local creativity.

There are said to be around 2,300 monuments engraved with waka from the Manyoshu scattered throughout Japan — the most taken from any of Japan’s classic poetry collections. By offering fuller descriptions, including in multiple languages for tourism resources that touch upon Japan’s history and culture, the joy of travel hopefully can be increased. If a campaign based on a promotional concept of “Japan — The stage where the Manyoshu unfolded” brought foreign visitors to Japan, that could help local areas to bounce back after the coronavirus pandemic.

It has been 75 years since the end of World War II. Can it really be said that during that period sufficient effort has been made to teach the world what the true spirit of Japan is all about?

According to McMillan, “More than ever during the Reiwa era, the significance of the Manyoshu is increasing.”

Overseas cultural exchanges and mutual understanding necessarily follow from their cultural aspects. That being so, we should take advantage of cultural assets like the Manyoshu to help the world know the true Japan.