A Feel of Classic Tokyo: Shibamata is More Than Just a Famous Movie Series’ Neighborhood 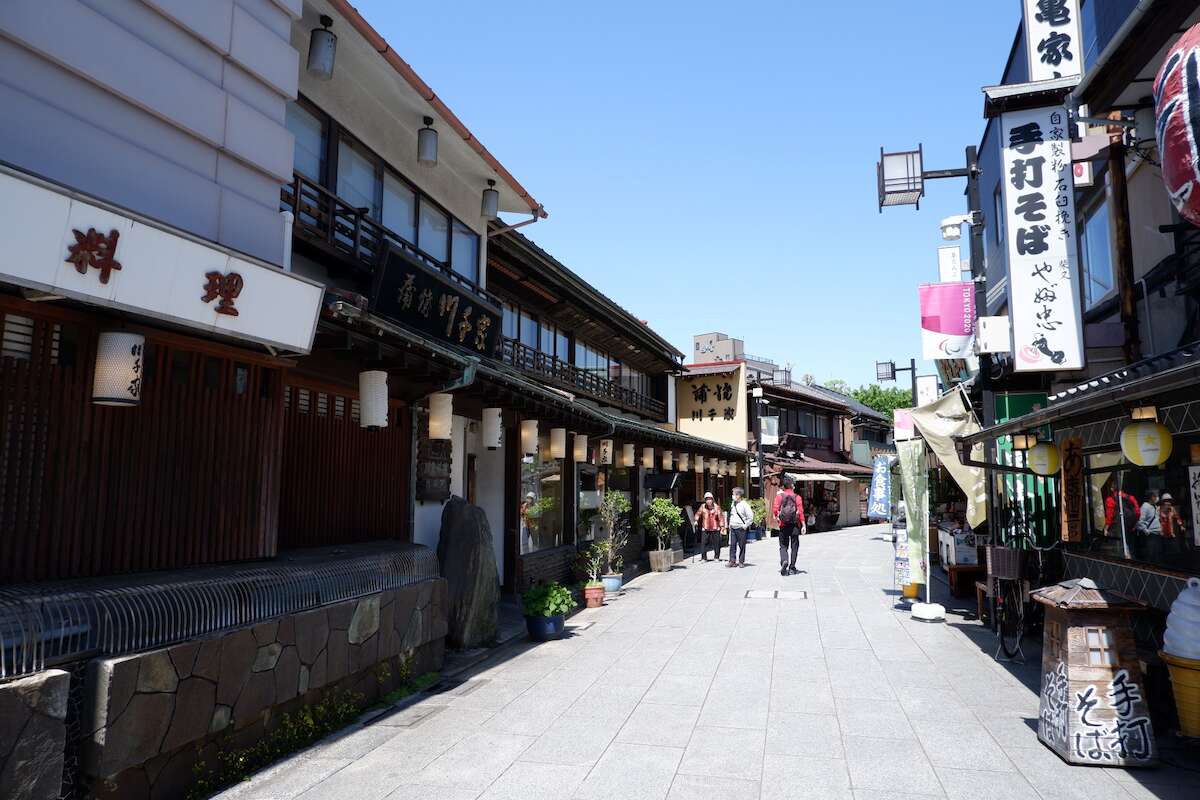 Shibamata on the east side of Tokyo in Katsushika Ward was the home base for Torajiro Kuruma, the lead character of an immensely popular Japanese film series, It’s Tough Being a Man (Otoko wa tsurai yo) that ran from 1969 to 1995 with 48 installments.

The town is one of a small number of neighborhoods in Tokyo that preserve something of 1960s-1970s Japan, a period when the devastation of the Pacific War had been erased and before the property bubble of the 1980s led to the wanton destruction of much of what might be called classic Tokyo.

Shibamata is served by a station of that name on the Keisei Kanamachi Railway Line that runs between Takasago Station and Kanamachi Station. For most visitors, the most convenient route to Shibamata would be to transfer to the main Keisei Line at Nippori Station (served by several rail lines, including the JR Yamanote Line), and then to the Kanamachi Line at Takasago. From there, it is one stop to Shibamata.

Exiting the Shibamata Station to the east, one immediately sees two bronze statues. One is Tora-san (literally, Mr. Tiger) and the other is his long-suffering sister Sakura. This is the beginning of the shopping street properly known as the Taishakuten-sando, named for the Buddhist temple at the far end of the street.

There is a helpful tourist information office and some retro shops, including a store near the station that sells retro toys and sweets. But the atmosphere that is associated with the film series begins about 100 meters further east of the station, on the other side of an arterial road connecting Takasago and Kanemachi.

The shopping street is lined by several scores of shops, most of which sell food and confections, either to take home or to eat on the spot.

Shibamata is known for its kusa-dango (mugwort-flavored dumplings). The English name may not be very appealing, but they are my favorite among all the many traditional Japanese (wagashi) confections.

Shibamata is also famous for its sembei, or rice crackers. These are available in a wide variety of sizes, shapes, and flavors, from the rather bland to quite spicy.

Other shops sell Japanese-style pickled vegetables or tsukemono. The attraction of buying these in Shibamata is that the shops selling these items also produce them, and for connoisseurs there are subtle differences in flavor among the offerings of the different shops. Often, you can taste-test before you buy.

Historically, Shibamata has been known for freshwater fish dishes using fish taken from the nearby Edogawa (Edo River) that forms the eastern boundary between Tokyo and Chiba Prefecture. The fish now come from Chiba, but carp (koi) sashimi and carp stewed in miso remain among the items that attract diners to Shibamata.

Many shops selling takeaway items also have indoor dining. Perhaps the most interesting are those that might be called taishu shokudo or “popular dining rooms.” These offer no-frills dining at a reasonable price. Generally, the food is quite tasty, but the ambience is that of a busy cafeteria.

Some of these establishments have sign cards autographed by Kiyoshi Atsumi (1928-1996), the actor who played Tora-san, and others involved in the Otoko series.

Because of COVID-19, visitors to Shibamata might prefer to buy one of the excellent bento (box lunches) sold by some shops and eat it at the park on the levee near the museums dedicated to Tora-san and Yoji Yamada, the director of most of the Tora-san films.

If you rent a bicycle, it is an easy 30-minute ride to Mizumoto Koen, which offers nearly unlimited potential for social distancing.

Cycles may be rented on weekends and holidays from a facility near the Tora-san Museum. The charge for day use is ￥400 JPY for adults and ￥200 JPY for children.

Aside from food, there are a number of shops selling traditional Japanese souvenir items. Most are small, lightweight, and recognizably Japanese, just the thing for tourists looking for gifts for stay-at-home friends and family members.

The shopping street leads to the Nichiren Buddhist temple with the formal name Taishakuten Daikyo-ji, generally known simply as Taishakuten. While there are records to indicate the founding of a temple on the site in 1629, the structures of the current temple are late 19th and early 20th century.

[054 Gate leading to the bell tower (at left) at Taishakuten Temple.]

The most notable feature of the temple is a large number of carved wood panels that illustrate various Buddhist teachings and parables. Even if you know nothing about Buddhism, you can appreciate the panels as artisanal craftsmanship of the highest level.

The panels are not, however, particularly old. They were carved by various sculptor artisans from the Kanto area between 1922 and 1934.

While a few of the panels can be seen from the public area of the temple grounds, seeing them close up in their entirety requires admission (adults ￥400 JPY, children ￥200 JPY).

This also gives access to the Suikei-en, a traditional Japanese garden, and the Daiyaku-den, a building that is a tasteful combination of Japanese and Western architectural styles. It offers fine views of the garden. Both date from 1929.

This combined memorial hall and museum commemorating the Tora-san film series is about a five-minute walk to the east from the temple. It is built on the side of the levee that protects Katsushika Ward when the Edo River is at flood stage.

There are two parts to the museum. One is focused on the Tora-san film series as viewers see it. This part includes a set used for filming indoor scenes located in Shibamata. It was moved from the Shochiku studios in Ofuna, south of Tokyo, near Kamakura.

In addition to the full-size set, there is a large-scale model of Shibamata as it appeared in the film series, and a replica of the human-powered tram cars that first served Shibamata. You can sit in the replica and have someone take your photograph.

Since Tora-san’s coming and going to and from Shibamata involved the Shibamata Station, there is also a replica of the station entrance and wicket from the era in which the films were set.

Most interesting to me is a full-size re-creation of a print shop of the era before typesetting was handled using computer technology. Printing required one or more pieces of metal type in various sizes, and fonts for each and every kanji (character) in common usage. They were then manually assembled into the desired format by skilled typesetters.

A separate but adjacent part of the museum is devoted to the technology behind the films, including cameras, projectors, and sound recording equipment. The items on display are not replicas, but those which were actually used in the production of the films and their screening.

I was particularly struck by the enormous reels for 35-mm film used for screening the films in movie theaters. Now, one Otoko film plus multiple soundtracks and subtitles fits comfortably on a single DVD or a thumbnail-sized memory card.

Admission to the combined museum is ￥450 JPY for adults. For an additional ￥100 JPY, you can get a ticket that gives admission to the nearby Yamamoto-tei (Yamamoto mansion and garden).

Light snacks and drinks are available in the museum and can be consumed in a large, attractive tatami-floored room that looks out into the classical Japanese garden.

Generally, Shibamata and its attractions have good wheelchair access and have accessible restrooms.

The Taishakuten Temple is the exception. There are no public restrooms and numerous steps and other impediments. A very detailed guide to Shibamata for wheelchair users can be found in the Tokyo Accessibility Guide 2020. This is available as a printed booklet or online.

The Shibamata shopping street, the Taishakuten temple, and the Yamamoto-tei mansion all survived the United States’ firebomb raids directed at residential areas of Tokyo and other Japanese cities beginning in March, 1945. Now, however, they face a threat that has destroyed more of old Tokyo than the B29s did: redevelopment.

When I visited Shibamata on April 23, 2021, workers were putting the finishing touches on two modern, generic buildings that replaced several old-fashioned shops in front of the Shibamata Station. Although the Keisei Railroad bowed to pressure from Katsushika Ward and made some concessions, Yoji Yamada, director of the Tora-san series, was only one of many expressing their disappointment about the redevelopment.

An even greater threat lies in Tokyo government plans for widening the street separating the station area from the shopping area, ostensibly to improve emergency vehicle access in the event of natural disasters. This plan allows four-story buildings that critics say would completely change the Shibamata environment.

COVID-19 is also taking its toll.  In January the Sankei Shimbun reported the closing of a Shibamata restaurant founded in 1790, one that appeared not only in the film series but also literary works by Natsume Soseki and other famous Japanese authors.

Fortunately, redevelopment plans in Japan take years, even decades, to realize, if they are realized at all. Only one shop has ceased operation because of COVID-19.  For the moment, the core of Shibamata remains safe and is well worth a visit.