[A Photographer’s Notes] Is the GoPro Hero9 Black a Viable Stills Camera for Action Sports? 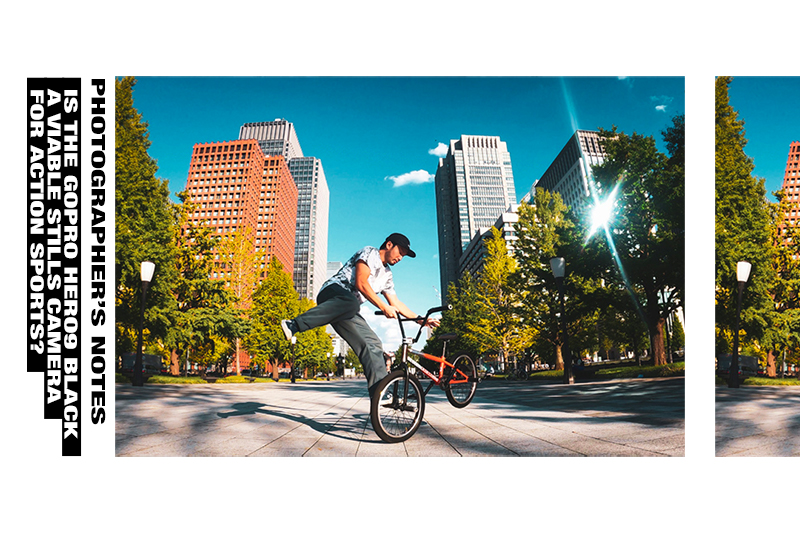 In the world of action sports, GoPro has been integral to capturing amazing video clips of crazy action since 2004. However, as technologies have advanced, and sensors have become smaller and more powerful, the current generation of GoPro (GoPro Hero9 Black) may have just become a viable option for action sports photography.

In an attempt to ascertain just how well this little camera could handle an action sports stills shoot, I headed to the Marunouchi area just outside Tokyo Station to meet up with Japanese BMX flatland rider Tsutomu Kitayama. Here we went through the various stills shooting options the GoPro Hero9 Black offers.

How good of a stills camera could it be? 2) Would this be something I would want to use in the future? Let’s find out.

One great thing about these Gopros is that the last few generations have been able to shoot RAW stills, which means the camera keeps all information possible, and leaves all the editing and post processing to the photographer. If you want the biggest and best file possible, I highly recommend you always shoot in RAW when you have the option available.

My first attempt was to see what I could get with a single shot + RAW setting on the new GoPro. Many times when shooting action sports I will keep my camera on single shot, especially when shooting with an external flash, so I thought I was used to this type of shooting.

Unfortunately, when I was trying to take pictures, I noticed that there was a SLIGHT delay between the instant I was using the shutter to when the photo was actually captured. If you are shooting landscape or portraits then this delay won't matter, but when photographing something as fast as flatland BMX this delay can make getting the proper timing quite difficult.

At the very least, it requires you to become a little more used to the camera before shooting action. In the end I started to get the timing down, but it was still a little difficult getting the best timing with this mode.

So what should you do when using the one shot setting is too difficult? Use 10!

One great thing about the GoPro Hero9 Black is that it can take bursts of 10 images even while in RAW. This can be super helpful when shooting action like flatland BMX or, for example, even just taking a picture of your friends jumping in the air for fun. This burst mode takes 10 RAW images in about 1 second, which then allows you to go through afterwards and pick the best image.

As it was getting late in the day I noticed Tsutomu’s shadow getting a little longer on the ground and decided to add it to my composition of the image. The Hero9 is so light that it was no pain to lift the camera up with one hand above Tsutomu, and frame the image while looking at the LCD screen.

I am sure I would not have gotten a well timing image doing this in single shot mode, but by shooting a burst of 10 images during the spin we were able to get a great shot! I think out of all the photos I took, these two are my favorites from the day. 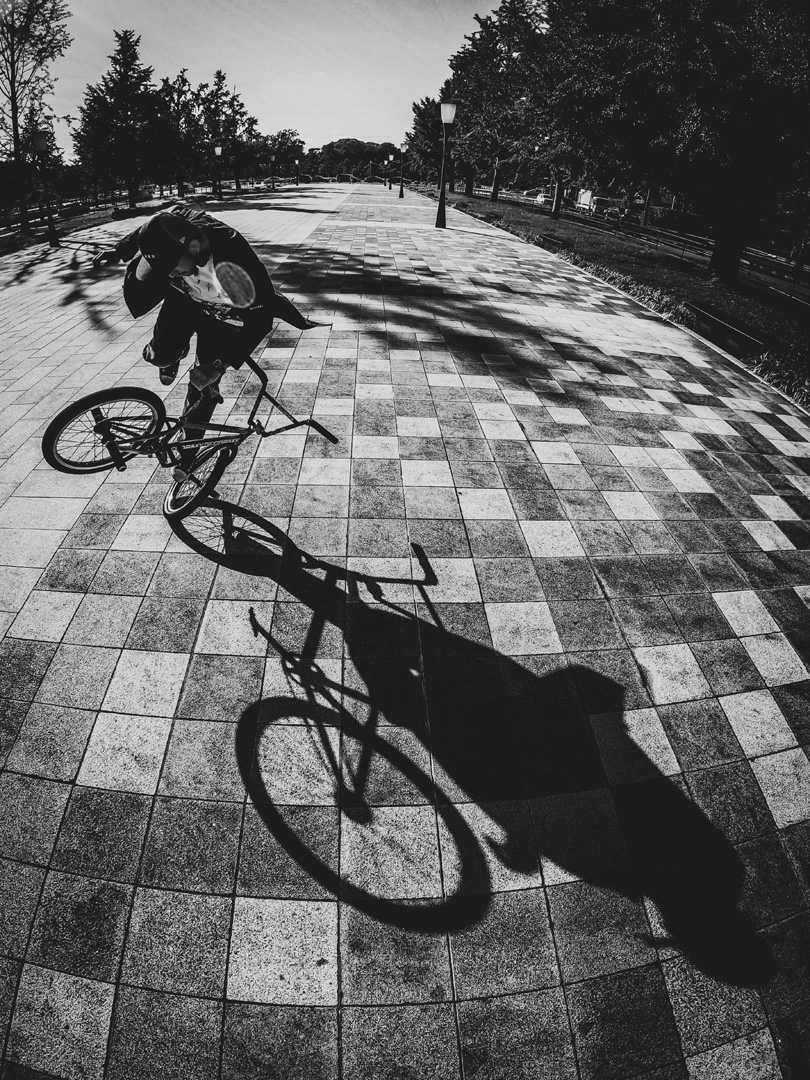 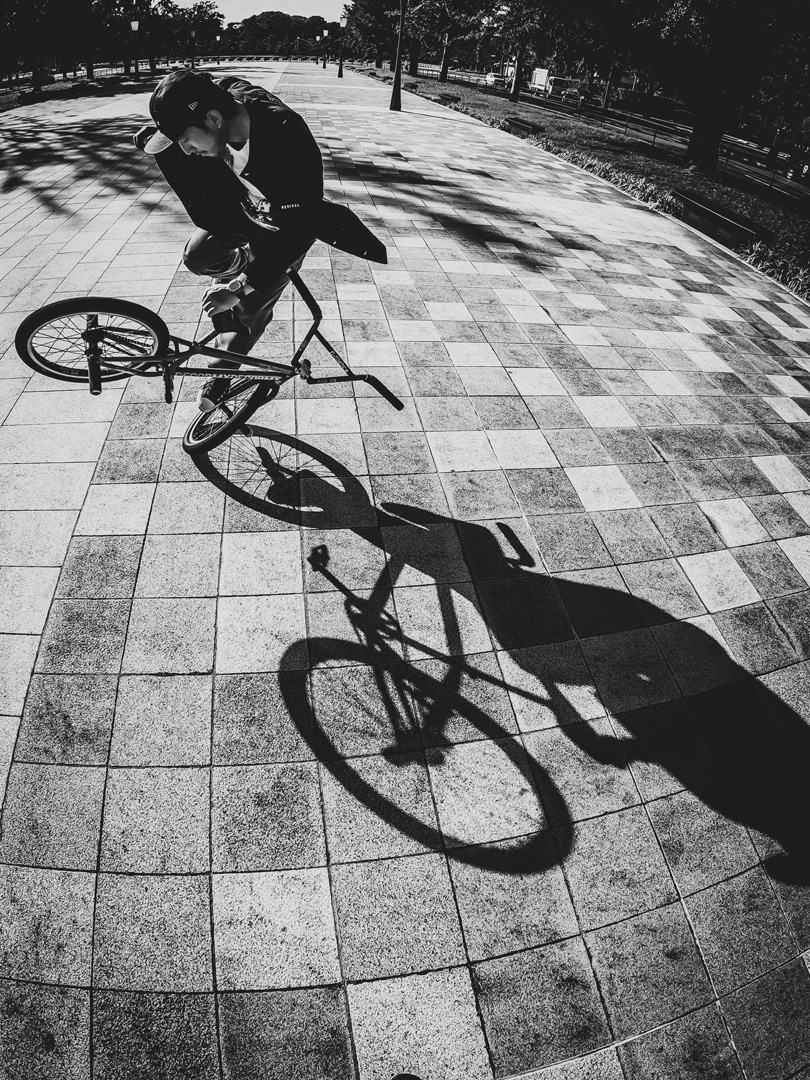 With spinning flatland BMX tricks, 10 images in one second gives you lots of opportunity to get a great shot. But for some tricks the moment of peak timing is so short that more images per second can be very helpful.

One such trick is where Tsutomu jumps in the air and is reaching for his seat, which he grabs just before he lands with his foot on the peg. I personally like the moment just as he is about to grab the seat, but hasn’t quite grabbed it yet. As you can imagine this moment is only for a split second, so if you are shooting in a burst mode, the more images per second the better!

As we started shooting this trick, though, I was pressing the shutter a little too late. For some reason I was still taking the picture like I was shooting one imageーtrying to take the shot at the peak action.

After checking the first couple attempts I realized I needed to start taking the burst just BEFORE Tsutomu starts his jump, so the 25 images are taken through the whole trick. Sounds totally obvious now, but sometimes you have to make silly mistakes to learn (or so I tell myself, haha). Once I got the timing down, it was just a matter of composition, and Tsutomu landing the trick.

So, if I can take 25 shots per second, why not just always shoot in this burst mode? By dropping the image quality down to JPEG you gain speed (processing speed for the camera), but lose a lot of potential data in the image file when compared to the RAW files.

If you just want a quick jpeg with the best possible timing, then dropping down to this mode is for you But if you are thinking of doing edits to your end images, then sticking with the RAW burst mode will give you cleaner images in the long run. It’s a balancing act, and in the end it comes down to your type of shooting and editing. 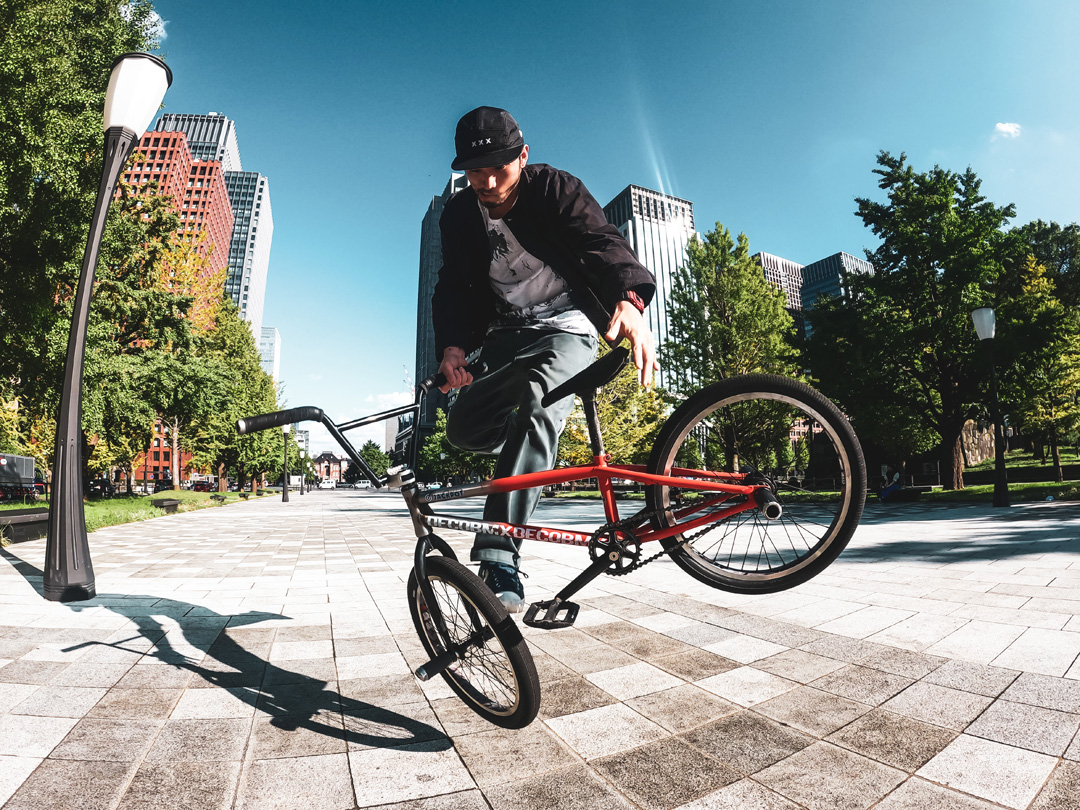 As cameras develop, camera makers keep coming out with interesting options for us photographers to play with. And in this era of SNS, many times you want to be able to take photos, while also taking video clips to share to your Instagram stories and places. The new GoPro LiveBurst mode is said to do just that. While capturing a 3 second 4K clip, it also captures 90 images that you can then go back and select through the GoPro app.

Pretty crazy, but I wasn’t that sure of what it would be like until we tried it. I must say though, I was quite impressed with the results.

One thing to keep in mind with this mode is that it takes the 1.5 seconds before and 1.5 seconds after you push the shutter to make its 3 second clip and 90 images (which are really just the individual frames of the 3 second video). We tried this a few times, and more than the timing of the individual photos I found myself playing with the look of the full clip overall.

This kind of dual shooting of photos and video was a first for me so it was quite fun for sure. The image quality of the photos does go down a little again when using this mode, but if you are shooting for your SNS and mainly viewing them on your phone, the images are totally useful. It is kind of a gimmicky mode, but I did enjoy using it and will for sure play with it again in the future. 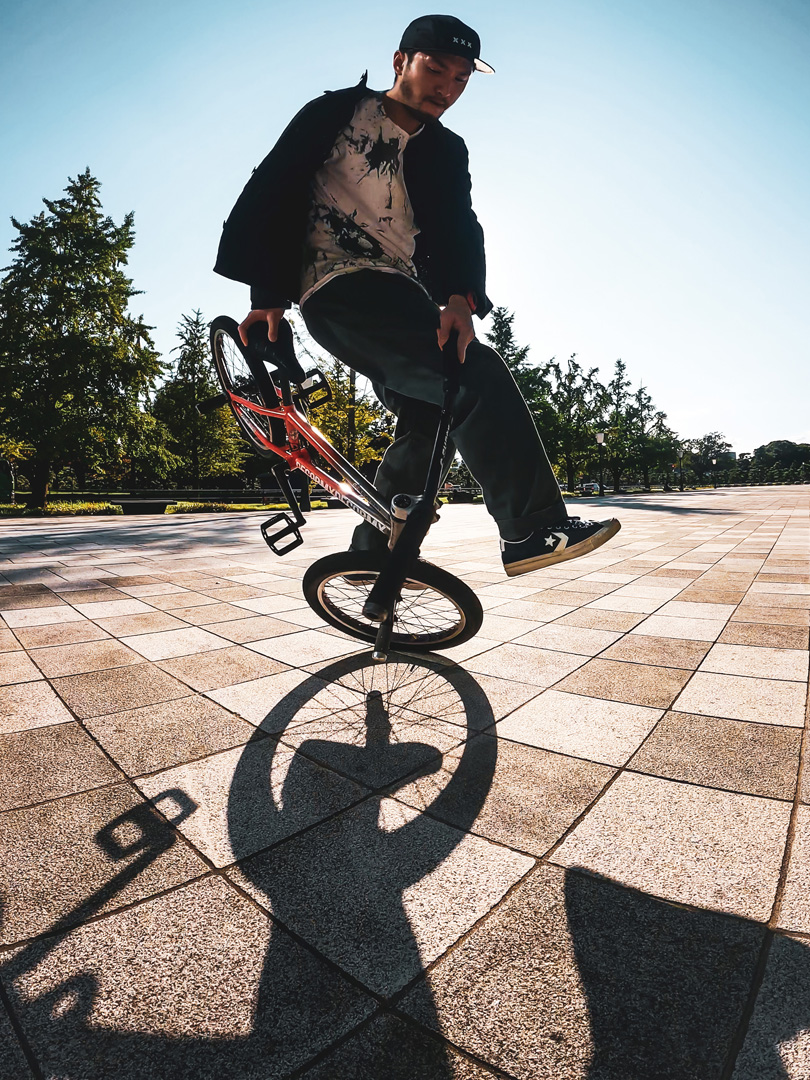 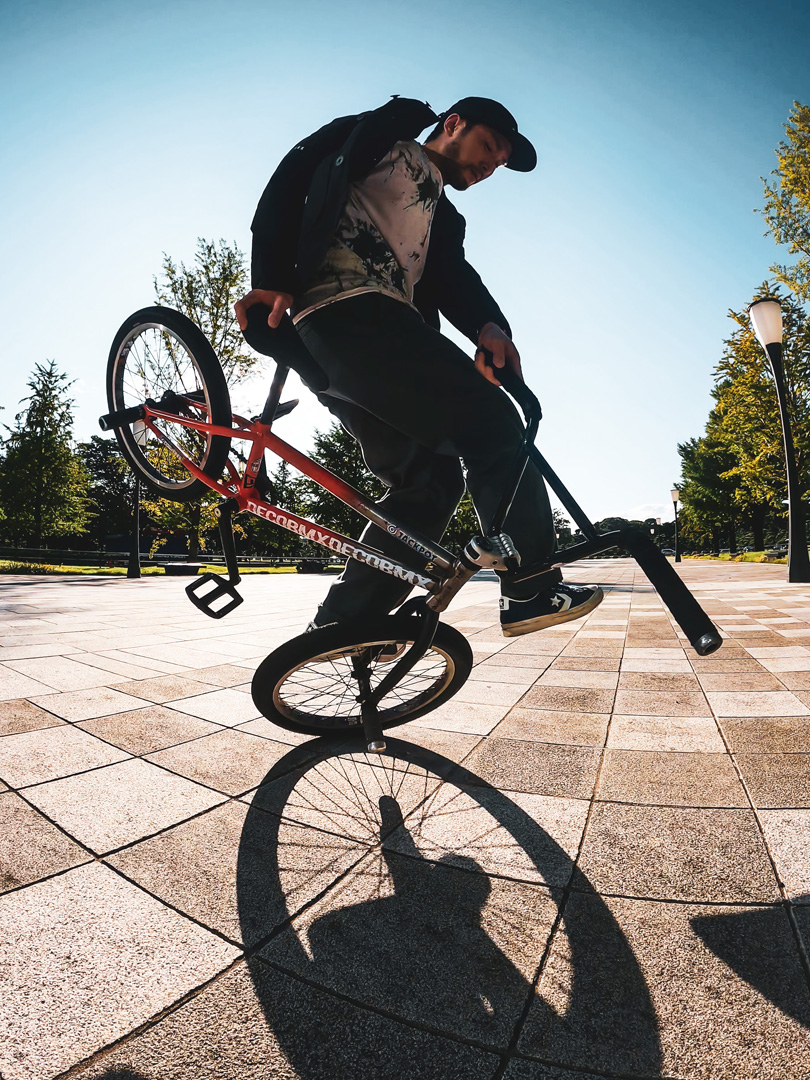 Taking the LiveBurst concept ever further, with the new GoPro Hero9 Black able to take 5K video, you can now get pretty high level photos by taking image captures of the 5K video. This is done through the GoPro app. Again, this was a totally new concept for me. But I was excited to see what 5K footage from the GoPro would look like, as well as see how clean and usable the captured photo images would be.

For this shoot I decided to place the GoPro on a little tripod and just let Tsutomu do a short line of tricks in front of the camera. This way he would get a nice short 5K video and I could play with the images as wellーWin Win!

It goes without saying that the 5K video looks really nice。But I was quite happily surprised at the quality of the images capture from the video.

With the image capture being 14mp, it's not the biggest image out there. But if you are out shooting 5K video and want a few stills for SNS, then this is a very viable option for sure. And as you are able to pick from each and EVERY frame of the video, getting the best possible timing is almost too easy.

I personally wouldn’t use this for a professional shoot where image quality needs to be as high as possible. But if you are shooting for SNS or trying to learn more about the best timing of tricks, this could be a very useful tool.

I also think this is a great option for people who are athletes and performing or practicing on their own, and want video but also want to be able to share stills to their SNS. Like we did, all they would have to do is pop the GoPro on a stand, and then they can use the app to pick their favorite points of action afterward. Pretty cool for sure! 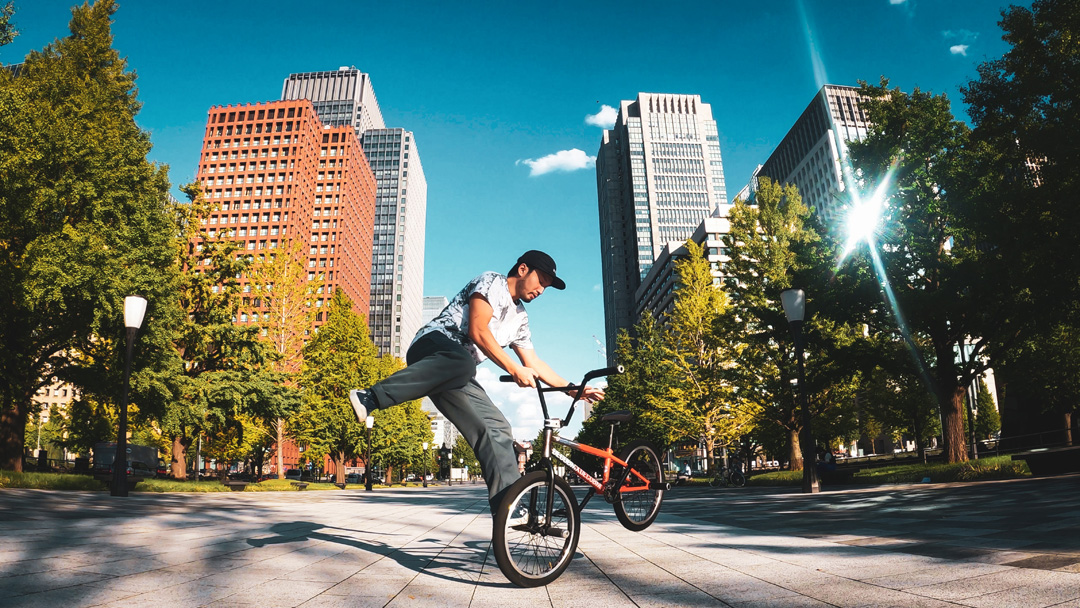 Although we did not shoot in the time-lapse mode during my test shoot, it is something the GoPro can do, and something I have seen some photographers do at events in the past.

Basically, in this mode you can tell the camera to take images at specified intervals for as long or as short as you wish. Of course this is great when taking things like sunsets and you want a video at the end. But this is also great for when you want to put your camera somewhere to take pictures, but you can be in that spot with your camera for the whole time.

A great example I have seen of this is when the photographers mount GoPros to the inside and outside of planes during the Red Bull Air Race. These images would be impossible to get in the traditional way (no room in the cockpit and sitting on the wing during the flight would be challenging to say the least) so this option is used.

For my own personal shooting, I would like to try this by mounting the camera up in the rafters of a breakdance competition and get images from directly above the stage, while I shoot below on the floor level as well. I’m looking forward to trying this option in the future!

That was our test shoot of the new GoPro Hero9 Black. In the end, I do think this is a good option as a still camera, considering the size, price, and versatility of what you can do with it. It is a great little video camera that is sturdyーand waterproof up to 10m! (I would need to buy a $6,000 USD housing to take my DSLR camera into the water.) By using the different shooting modes depending on your needs and ability, you can get some very usable photo images out of this camera as well.

Just the sheer size alone means it's something that can be easily tossed into a bag or pocket and taken with me to wherever I’m shooting, to add to what I would be getting with my DSLR. I look forward to playing with this more in the near future!

Where: Marunouchi area, near Tokyo Station