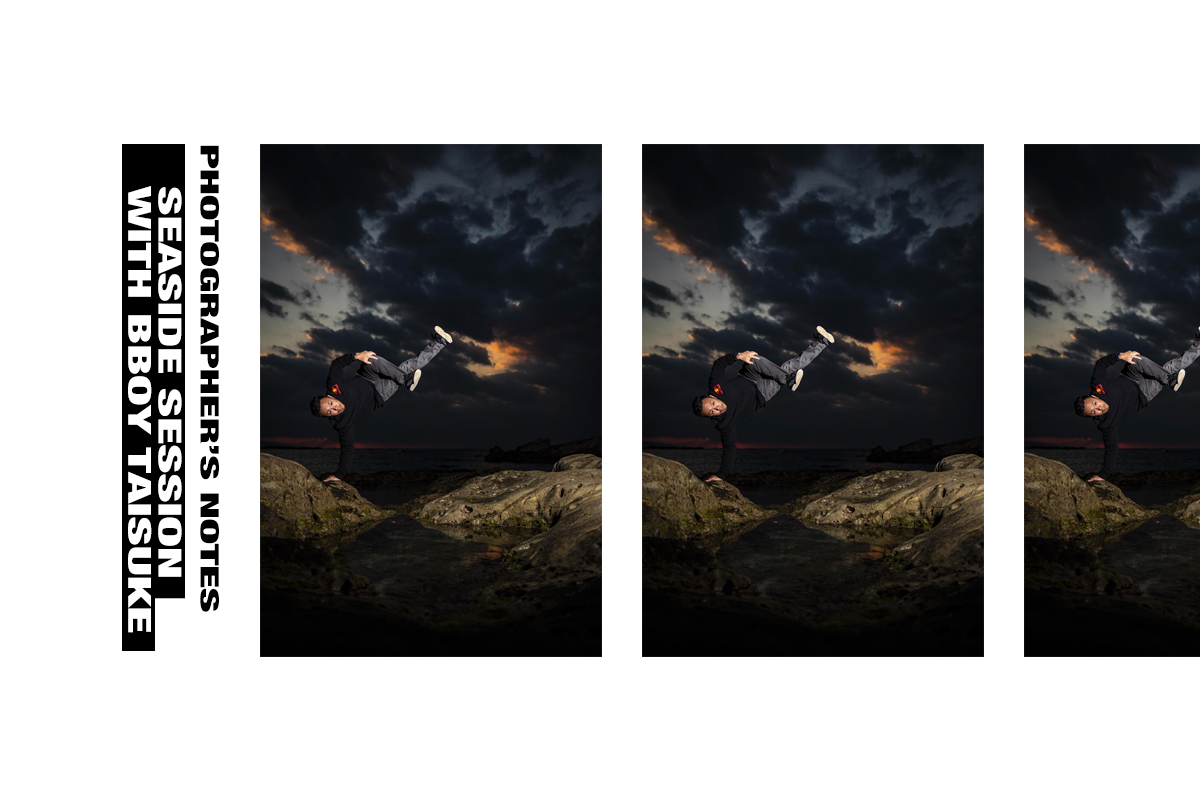 One of my final jobs of 2020 was traveling around Japan with BBOY TAISUKE and documenting a series of breakdance workshops he was doing for young breakdancers.

I have covered BBOY TAISUKE’s workshops many times, and they are always a fountain of knowledge in both dance and music cultures so I always enjoy the experience immensely. However, during this trip I think my favorite moment was a quick little session we had at the seaside during a night of fishing and camping in Chiba prefecture.

As you probably don’t  know, BBOY TAISUKE is not only one of the top breakdancers in the world, but also a well known fisherman, and he enjoys camping as well. So one of the nights during our trip we spent camping and fishing on the coast of Chiba Prefecture.

When we arrived at the campsite, one of the first things I did was wander around and see if I could find a couple cool spots for some quick photo sessions during our stay. As it was a nice day with interesting clouds, I really wanted to get something at sunset as well. I found a cool little spot down by the water, just in-front of our campsite, that looked great for a seaside sunset photo session.

After an unsuccessful attempt at fishing, I noticed the sun was getting low and there were still some nice clouds in the sky. But unfortunately there was also a thick band of clouds just at the horizon line, so it was hard to tell what kind of sunset we might get. Not wanting to miss out on the opportunity I got my gear together anyway and headed down to the water to get ready, just in case.

When shooting this kind of sunset session, one critical piece of equipment to have is a flash for your camera. Without a flash you are forced to expose your imageー

With action shots, bracketing is not really possible, so using an external flash is usually your best option.

Also, I should note, modern cameras usually have a sync shutter speed of about 1/250 of a second, so you are forced to use your ISO and aperture settings to bring the natural light down low enough to properly expose the sky. However, many flash brands now offer what is called high-speed sync, which means you can shoot at any shutter speed (up to 1/8000 on my Nikon D5) and thus control the natural light with your shutter speed. This will allow you to freeze action much more easily while also shooting at much lower apertures.

All these images you see here were shot at f/2.8, which would have been impossible normally, without the use of ND (neutral density) filters.

So now that my settings were ready, it was time to fight the clock (as setting sun waits for no photographer) and find the best angle I could.

This is always where I have the most fun for sure. I love moving around and trying different things, and seeing what inspiration the spot we are shooting at gives me. BBOY TAISUKE is super easy to shoot as well, because he can do all these moves many times over, giving me lots of chances to get the best possible image.

In the end my favorite shots were when I was getting the camera as low to water level as I could in a little tidal pool in-front of BBOY TAISUKE. I love playing with reflections and found the reflection on the tidal pool a great addition to the images.

We never did get the epic sunset I was hoping for, and I ended up getting pretty wet from accidentally sitting in a large puddle. But we both had a great time during the shoot and I am quite happy with the images we got!

Thanks again to BBOY TAISUKE for his amazing skills! Can’t wait for the next session.

ABOUT THE PHOTO SHOOT

Jason Halayko is a professional photographer specializing in action sports. Follow him on Twitter (@jason_halayko), and on Instagram (@jason_halayko).  Find more, including his series, [A Photographer’s Notes] here.