Experience Old-fashioned Tokyo on a Walking Tour Of Yanaka

One of the Best Beaches Near Tokyo: A Day Trip To Morito Beach

The Idyllic Hills of Biei: Exploring A Hidden Gem by Bike, Day 2 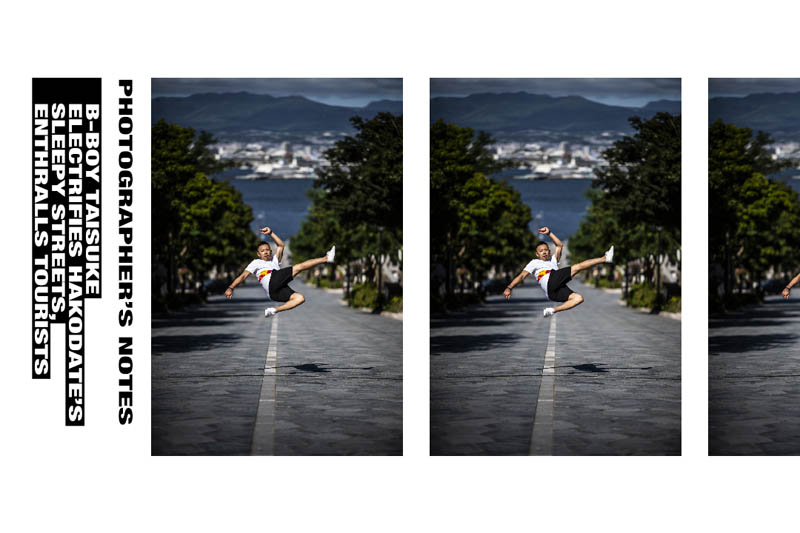 Although Tokyo has been my base of operations for the past three or four years, my photography work still takes me all over Japan. One of my recent trips had me traveling up North to the appealing Hokkaido coastal city of Hakodate. Once a major honeymoon spot for trendy newlyweds, it is now a nice sleepy city punctuated with an abundance of Lucky Pierrot burger joints (very much worth the wait).

The reason for the trip was to shoot the Japan qualifier for the Red Bull BC One, an annual breakdance competition from which the winning B-Boy and B-Girl can move on to battle at the world finals, held in India this year. I have been shooting this event for many years here in Japan and it’s one of my fave events to shoot for sure.

Upon arriving in Hakodate I noticed my shooting wouldn’t start till late afternoon the next day, so I hit up my friend and legendary Japanese B-Boy, BBOY TAISUKE, to see if he wanted to head out and get some shots around the event area.

I didn’t really know the area, but at these events there are always local dancers helping out, so I started asking around to see if anyone knew some cools spots close by. As it turned out, one of the most iconic spots in Hakodate — Motomachi — was less than a 10-minute walk away.

After checking it out online I knew it would be the best spot around. And I had an idea for one shot at the most famous spot in Motomachi — the top of a long street looking out over the ocean, toward the mountains beyond.

The next day I met BBOY TAISUKE at the venue. Along with my new local dancer friend and another photographer, we headed out to the Motomachi area.

Even if you are not a photographer, this area of Hakodate is really nice to wander around and explore. It is quite hilly, though — one reason it’s famous — so make sure to take some comfortable shoes.

After our nice climb up the hill with all my 30 kgs of gear, we noticed the one spot where I really wanted to shoot was already full of tourists and Instagramers. So we decided to take a walk and get what we could at other locations and then hit this spot on the way back, when it would hopefully be a little less crowded.

As we wandered, we found several good spots and had a lot of fun shooting in the little back streets of the area.

One of my personal reasons for trying to do this shoot was to get used to my newly-purchased Nikkor 105mm/1.4 lens. I love prime lenses and this lens is a beast, but oh so nice to use in many situations.

Whenever I get new gear I make sure to use it as much as I can personally before taking it on a job. This is to learn the best ways to use it and identify any possible issues that might arise. For example, the 105 lens is super sharp, even at 1.4mm. But the 105 focal length means I need to be much farther back than my 50mm lens when taking full body shots, like shots of a B-Boy doing a freeze or other dynamic moves. But this is why I try my gear as much as possible before using it on a job so there are no unfortunate surprises.

So after 30 minutes or so of shooting around the back streets, we headed back to the hill spot where I really wanted to shoot. By this time it seemed many of the tourists had moved on to the next spot, but there were still several people hanging out. After waiting a few minutes for other people to get their shot I asked BBOY TAISUKE to take a short walk down the hill while I looked through my camera for the best distance with my 105mm lens.

I had to laugh this time because, as soon as BBOY TAISUKE walked out into position, everyone on the hill stayed out of our way and let us get our shot. I think it was the combination of his confidence, my huge camera, and that he started to throw down once we started shooting.

Suddenly no one was interested in their own selfie, they just wanted to watch BBOY TAISUKE flipping and freezing in the middle of the street. As a result, it only took a few tries for each move and we had our shots. Thanks, everyone!

You never know when you get lucky with the right place and the right subject at the right time. Working with BBOY TAISUKE is always a treat, and I will cherish these images for a long time to come.

Photographer’s Information on the Shoot