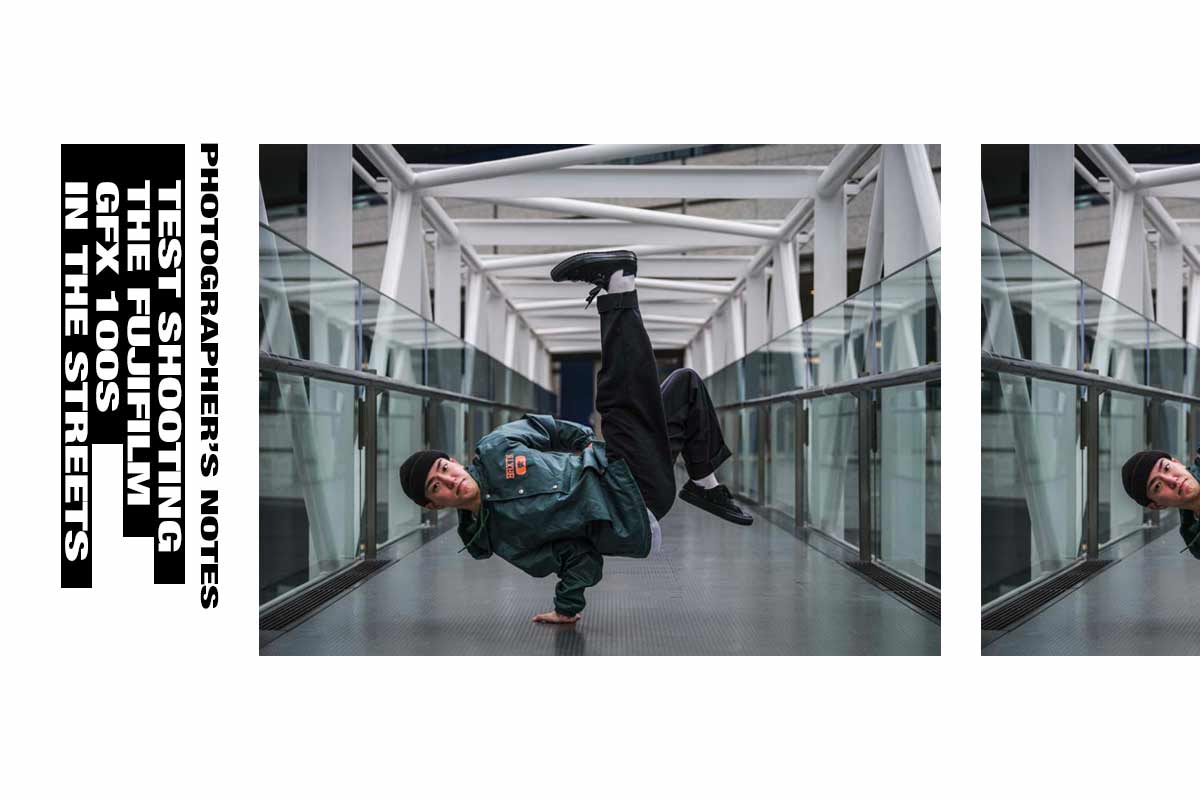 Read part 1 of the series here.

For Part 1 of my review of the newly released FujiFilm GFX100s I tried using the camera in a studio environment, as that is where I would like to take my photography more in the upcoming years.

Here in Part 2 I get back to my roots as a street photographer and take this amazing camera out into the wilds of Tokyo to see what it can do for me in a less controlled environment.

For this test session I met my good friend B-Boy Jun outside of Tokyo Station. I really like the Marunouchi area for photography, and have shot there many times in the past. Also, just a 5 min walk away from the station is the Tokyo International Forum, which is a beautiful building with amazing architecture. I was hoping to pop in there as well to see what we could get.

When we met up on the morning of our shoot it was very overcast, and you could tell it was about to rain any second. So we headed over to the Tokyo International Forum right away. Neither of us wanted to get wet, and I certainly didn’t want to risk my loner camera and lens in a sudden downpour. Upon arrival we entered the building and it was much quieter and peaceful than I expected, great! I would be shooting in all natural light for this shoot, so we were pretty inconspicuous. But I am honestly always a little nervous when shooting inside a building or on private property.

Inside Shoot at Tokyo International Forum

The Tokyo International Forum has these massive windows along one side of it, allowing tons of natural light into the building. However, since it was quite overcast, it was unfortunately a little darker inside than I was expecting.

The lens I borrowed for this shoot was an f/4 zoom lens (I almost always shoot at f/1.4 or f/2.8 depending on the lens) so again, a little darker lens than I am used to shooting with as well.

Starting on aperture priority mode with f/4 and setting my ISO to 400, I started shooting some portraits of Jun on the entrance walkway that takes you up to the floors above. After checking my focus and seeing the images were sharp, I double checked my settings and noticed I was shooting on a shutter speed of 1/15th or 1/20th of a second. It was WAY slower than I expected, but the images were amazingly sharp and in focus, even though I was not using a tripod. Great!

According to the FujiFilm website, the GFX100s has “a five-axis image stabilization system that provides up to six stops of vibration compensation”. For a camera this size, this is quite amazing to me. And I found when shooting handheld in that day’s low light situation, the internal stabilization really worked to allow me to get sharp images.

I should note that this is really only helpful when your subject is static or you are panning the camera horizontally following the movement of a car for example. If your subject is moving independent of your camera movement, you will, of course, still get motion blur from your subject’s movement in your images. This happened when I tried shooting a few action shots of Jun’s breakdancing, so I was forced to raise both the shutter speed (to 1/500th) and the ISO (1250) to stop the action and get a proper exposure.

From there, we moved all throughout the forum, taking both portraits and action shots in several locations. It really is an amazing building to shoot in, and I really wish we had more than just a couple hours for our shoot.


Outside with the GFX100s at Tokyo International Forum

Once we finished inside, I decided to get a couple pictures outside as well, where we could be a little more dynamic with our shooting.

Although the GFX100s is a 102mp camera, it also has a burst mode where you can shoot up to 5 frames per second. Now that is a lot of data getting pushed into the card, so I was a little interested/skeptical to see how it would work.

When shooting with natural light and pressed for time, I will use my Nikon D5’s burst mode when shooting action. I wanted to see if the GFX100s’ burst would be usable in a similar way.

Positioning Jun at the edge of a bench, I had him plant his hand on the edge of the bench and then toss his body to go into what is called a freeze on the edge of the bench. It is a simple move, but he is only at the peak action for a second, so if you are not used to the movement you might want to use the burst mode to help with the timing. We gave it a few tries and in the end it seemed to work just fine.

For each try I was taking 8 or 9 images in the burst, and the camera was able to keep up, no problem. I was honestly quite surprised. I would personally probably not use the burst mode when shooting with the GFX100s, but knowing it is there and usable is quite nice.

One other aspect of the GFX100s that I noticed while I was shooting the action, in particular, was the speed at which the image is taken once I have pressed the shutter. With some larger mega pixels cameras I have used in the past there is a distinctive lag from when the shutter is pressed to when the image is actually taken. When shooting something like action sports where timing is everything this lag, even a small one, can make getting the proper timing in your shots frustratingly difficult.

However, I was super happy to notice that the GFX100s has NO lag, and I was taking the pictures the instant that shutter was pressed. This small aspect of using the camera is massively important to someone like myself, and knowing there is no lag means I can use it with confidence when doing professional shoots where both portraits and action are required, which is a large percentage of my work.

In the end, I really enjoyed using the GFX100s for our shoot. It’s size and light weight (only 900gs) made it comfortable, and the various functions, such as the internal stabilization, burst mode, and lack of any noticeable lag when shooting, really shined and helped the shoot go smoothly.

Like I said in Part I, the files this camera produces are some of the biggest I have ever seen, so cropping is never an issue as well. Now that I have used the camera in the two situations that cover 99% of my work, I am more and more tempted to invest in this system and see where it could take my photography career in the future.