A Search in Fukushima: Are Soma’s Warriors the Last Samurai? 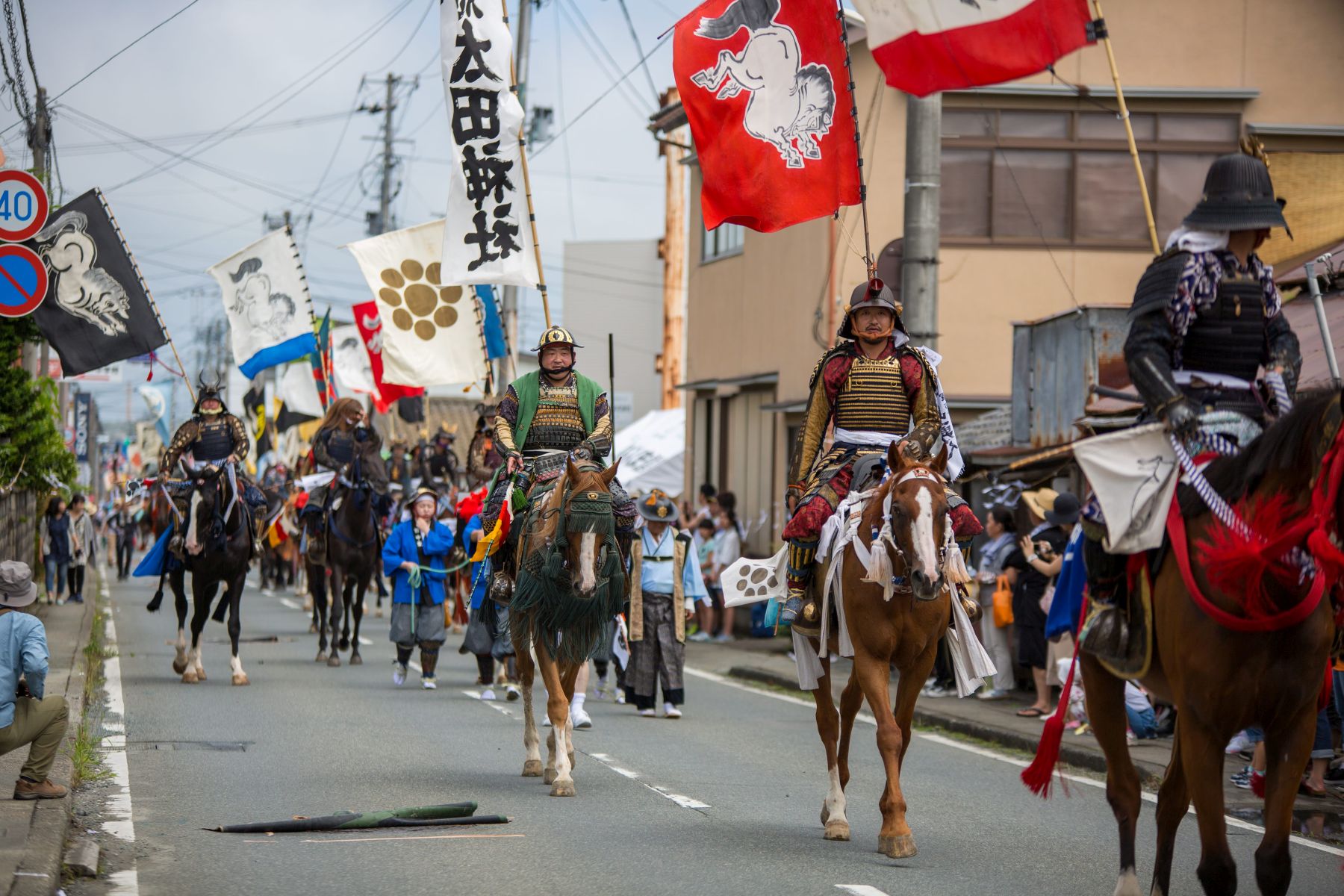 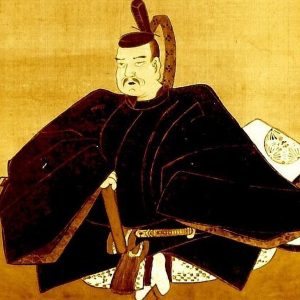 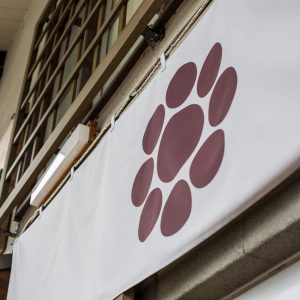 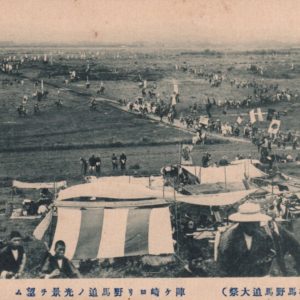 Part 2: In Search of the Samurai Spirit of Fukushima: The Heroes of Aizu

In the previous articles we visited the samurai legacies of Nihonmatsu and Aizu-Wakamatsu. This time we visit Haranomachi near the coast of Fukushima Prefecture.

It is often said that this person or that person is the “Last Samurai.” However, I think that term belongs to a collective rather than any one individual.

The people of Soma have long been referred to as the last samurai, even before the notion became popular. Every year for the last 1,000 years they have been maintaining a warrior tradition that is called the Soma Nomaoi.

The Soma Nomaoi is a three-day event that takes place on the last weekend of July every year, and has been designated an Important Intangible Folk Cultural Property of Japan. It features various horse-related events that are said to derive from the military exercises of the warriors of Taira Masakado (903-940), from whom the Soma clan claim descent (Masakado’s childhood name was Soma Kojiro).

The event is a fabulous display of samurai horsemanship skills, but at its core it is a Shinto festival. The streets leading the way to the event field are lined with Shinto sacred ropes, and the field itself is encompassed by one.

The Soma clan had resided in the vicinity of Soma-Nakamura castle (also known as Mutsu-Nakamura castle) from the Kamakura period (1185-1332) right up until the Boshin War (1868). Although daimyo no longer exist in Japan, Soma Yukitane is still regarded as the 34th generation head of the clan.

As per the Soma Ogyouretsu tradition, the clan head wears a bright red silk horo attached to his back. A horo is a Japanese medieval device for the defense of mounted horsemen from arrows fired at them from behind. Other people of position in the clan wear horo of different colors.

Although today not all of the participants are descended from the Soma samurai lineage, the event strictly adheres to traditional values of the samurai. If you attend the event, please take care not to cross the road during the Ogyouretsu procession, or call out to the mounted warriors. Additionally, avoid using the flash on your camera or any other things that may startle the horses. 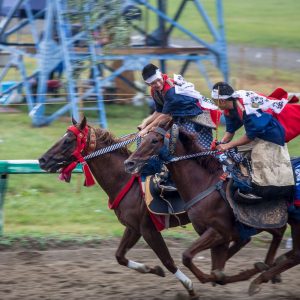 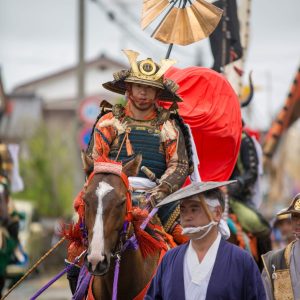 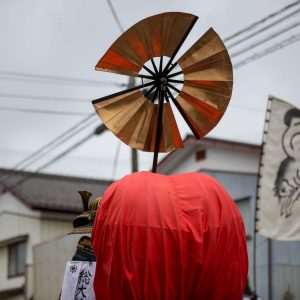 The first day of events begins with various groups of riders and people in samurai costume paying their respects at the three main shrines. This involves formal ceremonies of making prayers to the shrines and pledges to superiors.

Following this, teams of riders proceed to Hibarigahara field, and representatives of the groups ride up to the judges stand and introduce themselves in a samurai-like manner at the tops of their voices.

The last event of the first day is the Yoinori horse races, with riders wearing samurai armor and jimbaori (surcoat). This is considered a pre-event for the main events on the next day. 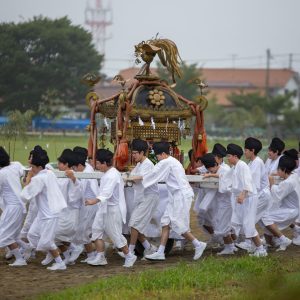 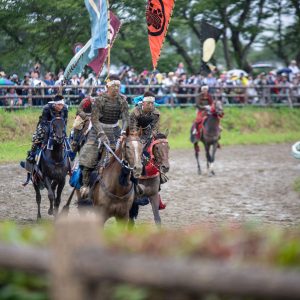 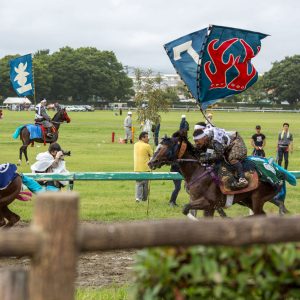 Ceremonies begin with armor warriors attending each of the three major shrines of Nakamura, Ohta, and Odaka, and escorting the mikoshi (portable shrines containing the patron deities) to the event field in a large procession called Ogyouretsu. Some 450 mounted samurai proceed down the main street for around 50 minutes, accompanied by singing and conch shell-blowing.

The first event of the day is the Katchu Keiba. It is 10 horse races with riders in samurai armor (katchu) and large flags called nobori-bata attached to their backs. Riders can fall off, and the sometimes wet weather adds to the excitement. However, it is not for the faint-hearted as serious injuries can occur. There is an ambulance on standby throughout the events.

This is followed by a main event called the Shinki Sodatsusen, where three or four sacred banners from the three main shrines (Red: Nakamura, Blue: Ohta, and Yellow: Odaka) are shot into the air from a mortar-like device. As the banners slowly drift down, scores of mounted samurai scramble and use their muchi (a wooden or bamboo versatile baton used as a riding crop) to try to be the first to grab one by hooking it out of the air. 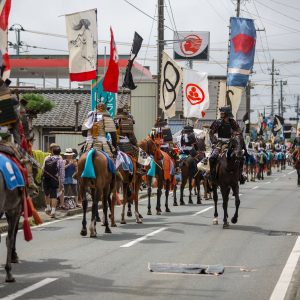 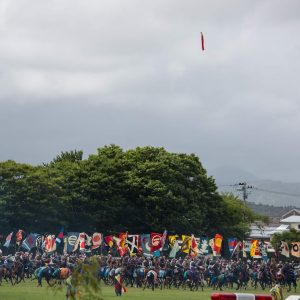 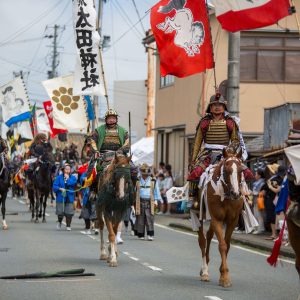 The final event is called Nomagake, also known as the wild horse chase. Riderless horses are released and chased along a route until they enter a special enclosure at Odaka shrine. They then have to be caught by several men on foot dressed in ceremonial white Shinto clothing. The horses are then bridled using sacred Shinto reed ropes, and presented to Myoken Bosatsu, the patron deity of the shrine and a protector of horses. It is thought that this dedication ceremony is the real origin of the event.

In the wake of the 2011 Great East Japan Earthquake and subsequent tsunami, the festival was nearly destroyed. The tsunami is said to have been 9.3 meters high in that area, and it wiped Soma and South Soma from the map. Some 2,000 people were killed or remain unaccounted for. A section of the Joban Railway line between Sendai and Soma was washed away. It has since been rebuilt some distance further inland and reopened in 2016.

Despite the terrible tragedy that befell the people of Soma, the remaining residents realized that if they did not attempt to continue their 1,000-year-old tradition, their community would never recover. They held the festival following the catastrophe regardless. To them, it was the life or death of their community.

That year participants were few, but year by year it has regained its numbers, and now it is as strong as it has ever been. It has become a symbol of hope in its own right in the wake of disaster. If there was a test to samurai spirit, the warriors of Soma passed with flying colors.

Taira Masakado is considered by many as the first samurai. It would be a fitting legacy to say that the current warriors of Soma are the “Last Samurai.” However, I do not think that they are. I think that as long as there is a Japan, Soma will be producing samurai warriors and passing on samurai spirit to future generations.

How to get there:

Take the Shinkansen from Tokyo and change at Sendai (1 hr 30 mins). Then take the Joban line for Haranomachi (1 hr 15 mins).

The event field is a ten to fifteen minute walk from the Haranomachi station. There is also a bus or taxi services. However, on the main day of the event (Sunday), you may want to walk along the route and find a good spot to watch the Ogyouretsu pass by.