A Walk Through Tokyo Cemeteries Under the Somei Yoshino Cherry Blossoms 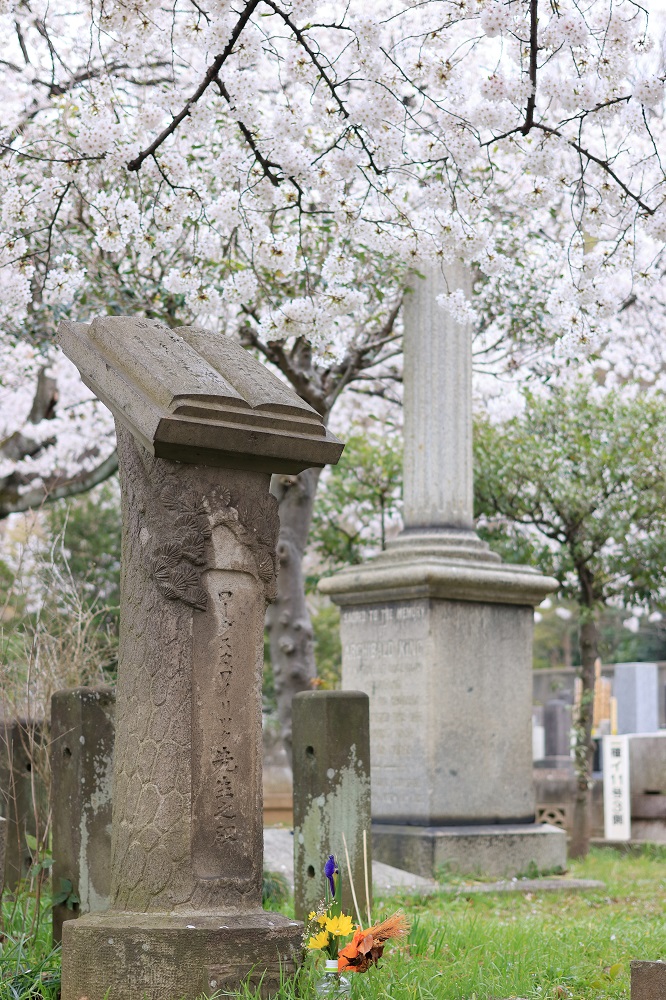 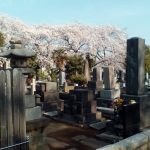 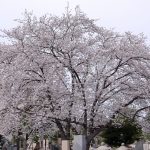 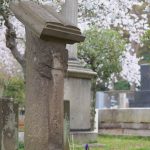 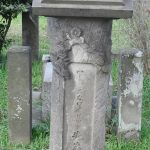 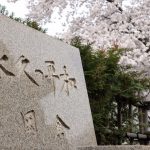 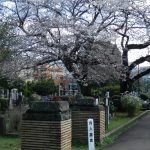 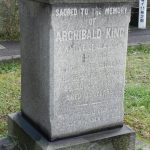 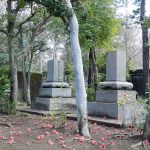 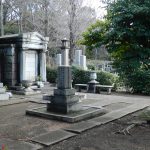 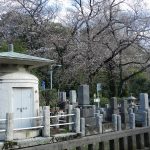 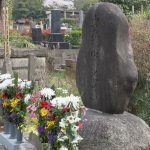 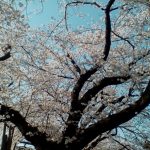 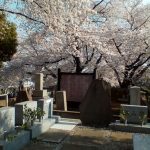 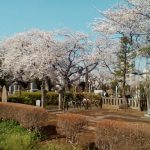 There are hundreds of different types of flowering cherry trees planted in Japan. But, as many others have noted, the Somei Yoshino variety is by far the most popular—so much so that when the media reports on the blooming of the cherry trees, they are essentially reporting on the Somei Yoshino.

Although the variety itself is of some antiquity, the name dates only from 1900. The Yoshino in the name refers to Yoshino Mountain, a UNESCO World Heritage Site in Nara prefecture that is known for its thousands of flowering cherry trees celebrated in song and poetry over many centuries. Records indicate that the variety that later came to be called Somei Yoshino was being sold in the vicinity as early as the 12th century.

The Somei part of the name comes from a village in Edo, now part of Tokyo, near the present-day Komagome Station on the JR Yamanote Line. The village was made up primarily of commercial gardeners. The name Somei Yoshino was coined by a horticultural specialist to differentiate the tree from other varieties of flowering cherry. The village name was added because its gardeners were seen as most responsible for the diffusion of the variety.

The village is long gone, having disappeared in one of the many administrative reorganizations of Tokyo that Edward Seidensticker chronicled in his book, Low City, High City (Knopf, 1983). Other than as the name of the flowering cherry variety, the name Somei survives only on a gate at the 300-year-old Rikugien public garden, a small shopping street called Somei Ginza near the train station, and Somei Reien (Somei Cemetery) the smallest of the eight cemeteries operated by the city of Tokyo.

Relatively unknown even among Tokyo natives, Somei Rein is far smaller than the enormous Tama Cemetery with its bewildering maze-like layout, and lacks the fame of the Aoyama Cemetery that is known both for its many flowering cherry trees and graves of foreigners famous in Japan. Nonetheless, I personally find the Somei Cemetery quite appealing and walk through it frequently on my way to and from the Tokyo Swimming Center.

As might be expected from the name, the Somei Reien has a large number of Somei Yoshino trees as well as other varieties of flowering cherry and plum trees. Walking through the cemetery is a singular pleasure day or night during the peak bloom. When our children were small we had our flower viewing—o-hanami picnic—in the cemetery.

The creation of the cemetery was intimately tied to the Meiji Restoration. Whereas the preceding Tokugawa regime had fostered a fusion of Shinto and Buddhism, the new Meiji government was hostile to Buddhism as something foreign that had a history of meddling in politics. The Meiji government mandated a separation of Shinto and Buddhism under a policy called 神仏分離政策—divine separation policy. It went so far as to encourage attacks on Buddhist temples, monuments, and icons.

Because most cemeteries were attached to Buddhist temples, the Meiji government took over the family cemetery of a minor daimyo family in 1872 to create what was originally a Shinto cemetery, a remnant of which survives today, and passed control of it to Tokyo in 1874 from whence it became a non-sectarian cemetery. The name Somei Reien dates from 1935.

Because of its early creation, Somei Rein holds the graves of numerous Meiji- and Taisho-era figures, mostly Japanese. There are also a few foreign nationals who have their graves in a small foreign area or gaijin bochi (外人墓地) as it is designated by signs within the cemetery and on a long list of notables that is available from the management office.

Of the small number of foreign nationals with graves in Somei Reien, one is quite notable: Loduska J. Wirick, who came to Japan in 1890 as a nurse funded by the Foreign Christian Missionary Society, an agency of the American protestant sect The Disciples of Christ.

Her coming to Japan was completely serendipitous. Another woman who had been scheduled to go to Japan died in a boating accident the day before she was set to leave. Students at Drake University in Des Moines, Iowa, raised a $4,000 fund in memory of the deceased missionary and this money was used to support Wirick in Japan.

Loduska Wirick became known first for her work with those suffering from Hansen’s Disease—commonly known as leprosy—and later for nursing wounded and injured soldiers from the Russo-Japanese War of 1904-1905. This earned her the popular title “the [Florence] Nightingale of the Orient,” a designation that appears on several sign posts within the cemetery and on the plaque that honors her.

During a sabbatical in the United States, Wirick was diagnosed with terminal cancer at the famed Mayo Clinic in Minnesota. She chose to return to Japan to continue her nursing work as long as she was physically able. She died on May 30, 1914, at age 57, in the third year of the Taisho era that followed the Meiji era that had seen Japan come from being an obscure and isolated country to world power status.

Aside from her grave marker, which is designed as a church lectern with an open Bible on it [PHOTO], her name and the designation “the [Florence] Nightingale of the Orient” appear in many sources dealing with the history of nursing in Japan and in studies of foreign nationals who made a contribution to the modernization of Japan during the Meiji era.

Space limitations preclude more than mere mention of some of the famous Meiji-Taisho era Japanese with graves in the Somei Reien. One that has personal significance is Tatsunosuke Hasegawa (1864-1909), who wrote under the pen name Futabatei Shimei, which is said to be a play on his father’s curse (くたばってしまえ or drop dead) uttered when Hasegawa announced his intention to become a novelist. His novel Ukigumo (Floating Clouds), said to be the first European-style novel written by a Japanese, was a source for my book The Self-Made Man in Meiji Japanese Thought: From Samurai to Salaryman.

The grave of Kakuzo Okakura (1862-1913), better known for his pen name Okakura Tenshin and famous for his 1906 The Book of Tea, is also in Somei Reien, although there is a separate memorial in the Yanaka-Sendagi area of Taito Ward, Tokyo. Okakura was one of two Meiji-era Japanese who wrote primarily in English, the other being Inazo Nitobe, whose Bushido: The Soul of Japan (1899) remains in print and is frequently cited.

Whereas Nitobe invented Bushido, in an attempt to show that Japan had an indigenous set of morals and ethics equivalent to that of the European and specifically English notion of gentleman, Okakura invented a mythic Asia that lumped together India and China that he claimed provided a “common thought inheritance” for all Asians that contrasted with the “Mediterranean and the Baltic” inheritance of the West. Unlike Nitobe, who might be said to have sought to ingratiate Japan with the West, Okakura scorned Japanese attempts to identify with Western values.

Both men were romantics, albeit in quite different ways. Both men wrote of a Japan or of an Asia that was largely a figment of their imagination—something that could be explained from the history of Japan or Asia only by ignoring whatever did not fit their agenda and by inventing whatever they could not find in their cherry-picked reading of history.

Another notable romantic with a grave in Somei Reien is Masahiro Yasuoka (1898-1983). He fused Chinese thought, especially that of Wang Yangming, with a highly conservative Japanese nationalism. Through his teaching and personal contacts, he influenced a number of 1930s-1940s political figures. Despite being purged by the Americans, he re-emerged to become a speech writer and spiritual guide for major post-war prime ministers, including Shigeru Yoshida, Hayato Ikeda (who initiated the “income doubling plan” that led to the “miraculous growth” of Japan in the 1960s), and numerous others. A group he founded in 1949 remains active, and there were fresh flowers at his grave when I visited in late March.

Visiting cemeteries may not be to everyone’s taste, but because of the well-established pattern of nearly 100% cremation, Japanese cemeteries are more memorial parks than they are cemeteries in the European or American sense. For someone like myself, originally a Meiji-era historian, cemeteries dating from the Meiji-Taisho era give me a feeling of having met some of the many figures I have read about or personally researched.

For the foreign visitor to Japan, the Somei Rein has the added attraction of easy access and proximity to other points of interest that make for a good day of sight-seeing. It is 10-12 minutes’ walk from the JR Sugamo station, and from the cemetery it is a short walk to the Jizo-dori Shopping Street famous as the “Old Ladies Harajuku” (fashion street for elderly women).

Slightly further away in the opposite direction toward the JR Komagome station is Rikugien, said by many to be the most beautiful of the traditional landscape parks in Tokyo. And directly adjacent to the cemetery is the Tokyo Somei Spa Sakura, which provides something of an onsen experience without hours of travel beyond the city.