Abe and Obama: A Long Road 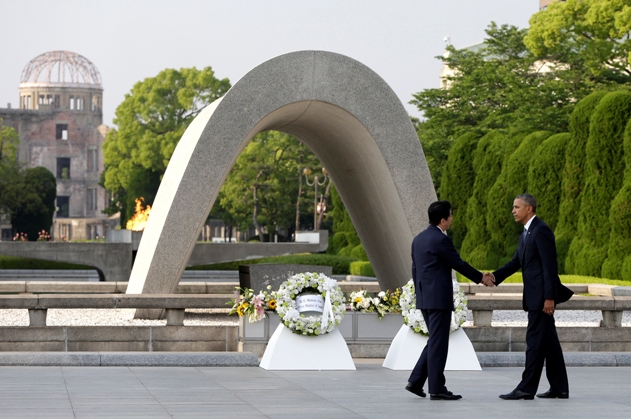 Prime Minister Abe of Japan and President Obama could only make time for a standing goodbye in where they met at the APEC summit on November 20 in Lima, Peru. Both men praised the other for their strong leadership during the four years and thanked each other for their hard work to strengthen the alliance between Japan and the United States. Though the Prime Minister will visit Pearl Harbor this week, the handshake must have been a time for reflection.

Prime Minister Abe responded to his first meeting with President-elect Trump by saying “This will be fine. It will work out well,” but his first meeting with President Obama had been awkward. Though President Obama became the first U.S. president in office to visit Hiroshima, the first city attacked by a nuclear weapon, in a triumph for Prime Minister Abe, but the path to a good relationship leading up to this visit had been anything but smooth.

“I felt like I’m in a real contest with President Obama,” Abe is reported saying the evening before his first meeting with Obama in February 2013. Arranging the meeting had even been a challenge since an earlier attempt to meet in January had been thwarted by scheduling conflicts. Even before the new prime minister had come into office, he had been branded as a dangerous nationalist and historical revisionist by leftist Japanese politicians and many Americans around President Obama.

Later in the same year, the Prime Minister visited Yasukuni Shrine to commemorate the war dead, leading to the United States to express its “disappointment” with the visit to the controversial shrine. Prime Minister Abe responded angrily, saying “The Obama administration completely lacks strategic thinking. That kind of statement just feeds the animosity of the anti-Japanese factions in China and Korea and raises tensions in East Asia. It contributes nothing to America’s strategic position.”

At the same time, Prime Minister Abe worked patiently to strengthen the bilateral relationship. He emphasized his advocacy of human rights, the rule of law, and democratic values, using every chance available at international conferences, individual meetings with heads of state, and other forums. He stressed his openness to talks with China and Korea despite their refusal to engage in summit talks. Gradually, he built up the trust of the international community.

Conversely, President Obama became known for his aloofness. According to the British Foreign Office, he had no strong personal relationships among world leaders, and had especially poor relations with leaders of allies such as the United Kingdom, Saudi Arabia, and Israel.

At the 2014 G7 meeting in Brussels, President Obama found himself isolated over the question of sanctions against Russia for annexing Crimea and its role in the violence in Ukraine, even getting into a vehement argument with French President Francois Hollande. But it was Prime Minister Abe who came to the rescue, bringing the discussion to an amicable conclusion. There were reports that President Obama gave him a hug and Italian Prime Minister Renzi wanted to give him a high five . It was a watershed moment in the development of the relationship between President Obama and Prime Minister Abe.

The Prime Minister buttressed this by strengthening bilateral relations through addressing both security and historical issues. In regards to security, he passed the Secret Information Protection Act, long sought by the United States and United Kingdom, and took a political hit at home as he watched his cabinet’s approval ratings (temporarily) decline 10 percentage points. He also expended more political capital when he passed legislation reinterpret the applications of collective self-defense.

Regarding historical issues, his speech to a joint session of the United States Congress delivered a powerful message of reconciliation that the United States could welcome as it marked 70 years since the end of World War II. Prime Minister Abe built up a successful foreign policy and within Japan maintained a sound foundation for government by keeping his cabinet approval ratings high. The sum of these efforts helped clear the way for President Obama’s visit to Hiroshima and will be bookended by Prime Minister Abe’s visit to Pearl Harbor in December.