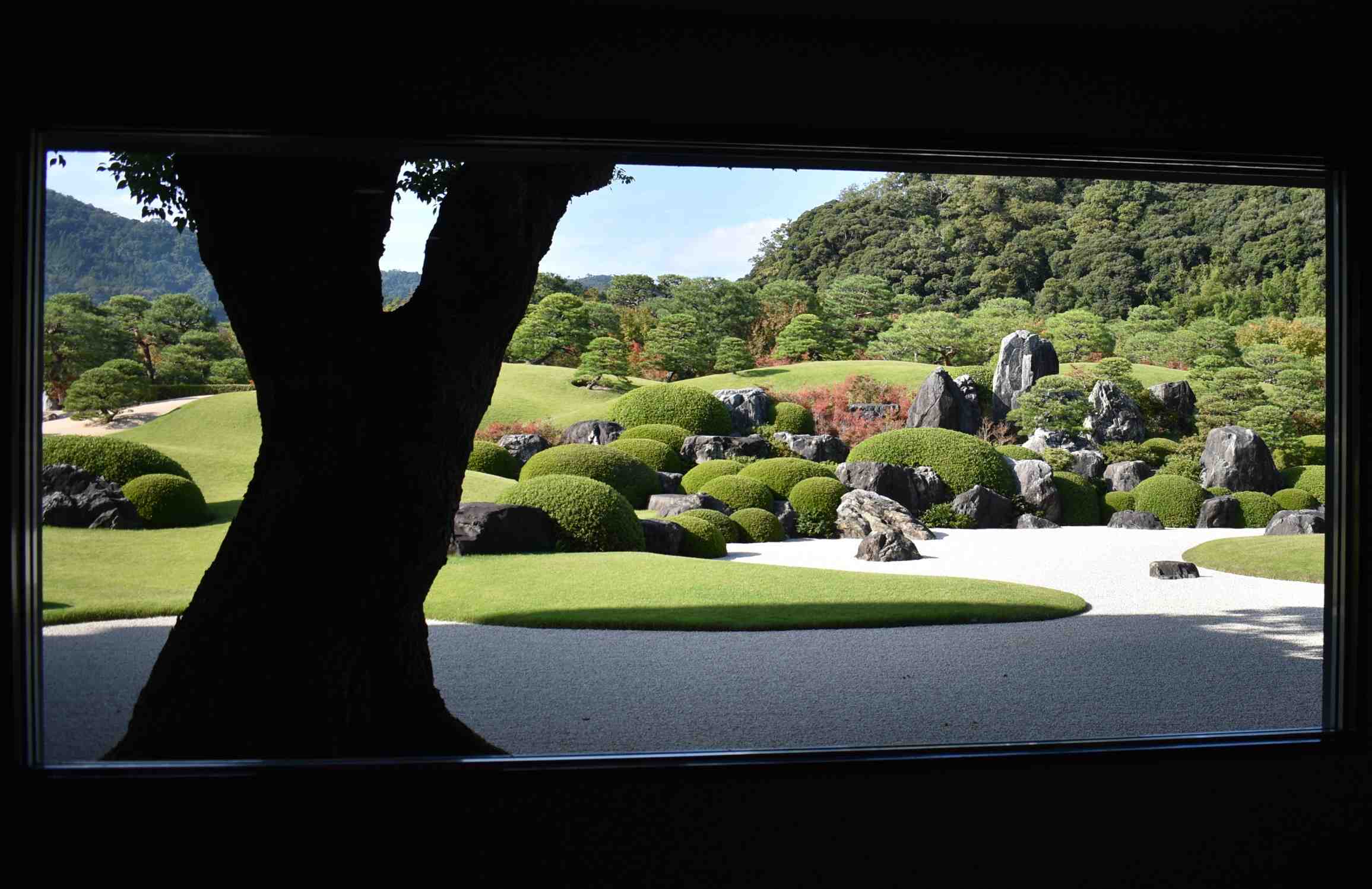 On November 3 the Adachi Museum of Art in Yasugi City, Shimane Prefecture, celebrates the 50th anniversary of its opening. A prestigious specialty magazine in the United States devoted to Japanese gardens ranked the gardens attached to the museum as the best gardens in Japan in 2019. That marked the 17th consecutive year that the gardens had placed first.

The museum itself contains several gems of modern Japanese art. Likewise, the refined layout and presentation of the six gardens epitomize the belief of its founder Zenko Adachi (1899-1990) that “a Japanese garden should be thought of a living canvas.”

The gardens’ design therefore pays attention to the smallest detail, and the trees planted in them were specifically chosen to best express the feel of each season. It is said that Adachi even purchased part of an adjacent mountain to ensure that the view of the garden landscape would remain unblemished. 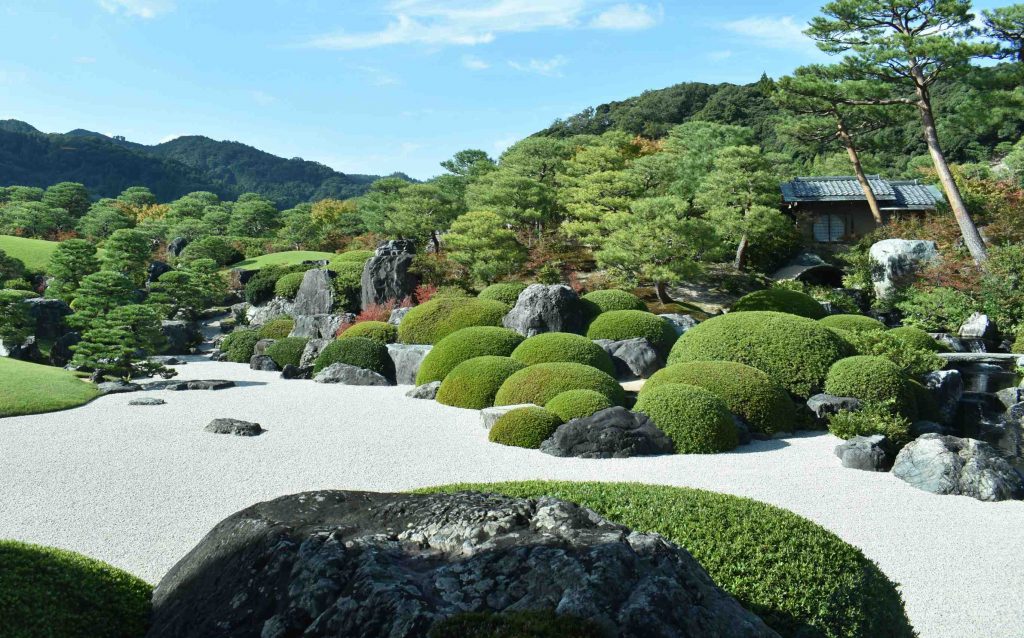 Gardens as a Living Painting

Ever since the Adachi Museum of Art opened its doors in November 1969, it has adhered to a philosophy of harmonizing its Japanese gardens with its collection of around 1,500 works of modern Japanese art.

These include many works by titans of Japanese painting active during the first part of the 20th century, including Taikan Yokoyama, Seiho Takeuchi, and the woman painter Shoen Uemura. The exhibits are revised to match the changing face of the gardens throughout the four seasons.

The grounds, measuring around 165,000 square meters, actually contain six gardens, including the Dry Landscape Garden, the Reception Garden, White Gravel and Pine Garden, the Moss Garden, the Pond Garden and the Tea Garden. Within them, different varieties of azalea, maple, and other flora are strategically placed so as to create a veritable landscape painting. There are no ugly electric power lines or poles on the surrounding hillsides to mar the scene. The museum bought up parts of the adjacent hills specifically with that in mind.

The U.S.-based Journal of Japanese Gardening has once again recognized the beautiful aesthetics and atmosphere of the Adachi museum’s gardens, naming them number one in Japan for the 17th straight year — ahead of such world-famous gardens as the Katsura Rikyu in Kyoto.

The international experts who made the choice noted the overall quality of the gardens and their management, the balance between the gardens and museum building, as well as support for visitors. The experts visited various gardens in Japan on an incognito basis, mingling with normal visitors. Museum staff admitted that, for that reason, they were “on pins and needles every single day.” 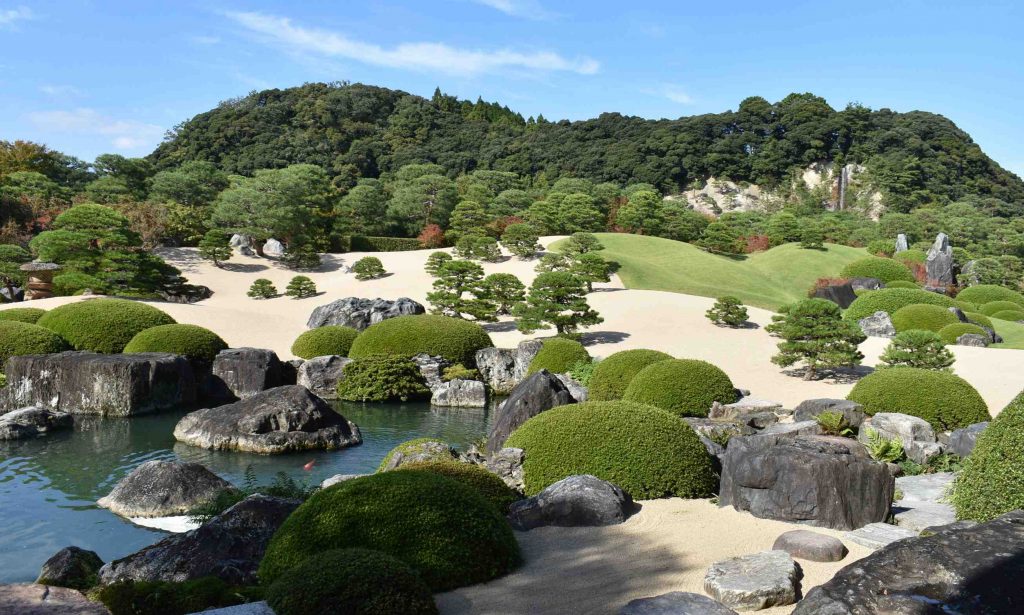 Concern for the Smallest Detail

According to the museum, annual visitor numbers have exceeded 600,000 for the past several years. As overseas recognition of the museum’s gardens has grown, there has been a conspicuous rise in the number of foreign visitors. One prime reason for its popularity is the keen consciousness of all staff to maintain the garden properly, as has been noted even by the professional journals.

How does that manifest itself on a day-to-day basis?

Early each morning, before the museum even opens its doors, staff can be seen ー bamboo brooms in hand ー busily cleaning. Not only do they carefully rake the white sand, they also remove any fallen leaves and dark stones, and pick up any sand that may have blown on top of the moss. Reportedly, the museum employs seven professional gardeners.

Judging from such things as the carefully trimmed grass and replacement of sand where needed, the staff spare no effort to keep the gardens looking beautiful.

In the backyard referred to as the “temporary planting plot,” spare pine trees and moss are grown. In fact, there are said to be over 400 Japanese red pines alone growing here. If a tree grows so large that it upsets the balance in the garden, then a ready replacement will be available.

This conscientious approach reflects the philosophy of museum founder Zenko Adachi. Born in Yasugi, Shimane Prefecture, Adachi left for Osaka where he made a fortune in textiles and real estate. He also became an avid collector of art, and opened the museum when he was 71 out of a desire “to give back to my hometown.” Thereafter, until his death 20 years later, he devoted himself to perfecting his garden and collecting art.

The house in which Adachi was born and raised still stands near the Pond Garden. After establishing the museum, although those around him opposed the move, Adachi had a hole knocked out in the wall of the tokonoma alcove with a hammer so as to create a view of the garden outside, akin to a hanging scroll that would traditionally grace the alcove. This viewing spot of a “living painting” within the museum has become one of its most appreciated aspects by visitors.

Adachi’s garden was not an overnight creation. In fact, it took 15 years to complete. When engaged in company travel, he would maintain an eagle eye on the scenery outside the train window, and if he saw a red pine that particularly appealed to him, he would be very pleased. There are instances in which these trips turned into “red pine hunting” forays.

Today there are about 800 red pines planted in the gardens, and they make a critical contribution to the overall view. The museum’s publicity director Wataru Takeda explains. “Through variable pruning of the front and back of the carefully placed red pines, we can get the effect of the hill and garden appearing to naturally come together.” 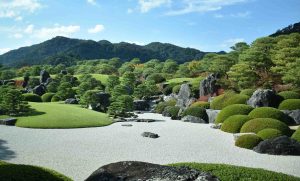 Accommodating Even a Single Visitor

Adachi was committed to opening the museum’s doors, if even only a single visitor showed up. And the museum carries on that philosophy today. As a result, the museum has not closed even once since it first opened 50 years ago.

During the five decades since then, the museum and gardens have been hit by typhoons, earthquakes, and other natural disasters, but luckily they have never suffered critical damage. Thus, they have been able to preserve its unblemished record of “never closing” (although the annex does close temporarily when exhibits are changed.)

The COVID-19 pandemic has, in fact, proved the biggest challenge the Adachi Museum of Art has faced to date. However, it somehow managed to continue normal operations by implementing thorough safety countermeasures.

The Adachi staff have accumulated a wealth of knowledge about gardening over the past half-century, and they continue to strive to present to the eye of visitors a perfect garden in which, even after a typhoon or other calamity, not a single fallen leaf or branch is to be seen.

“Even as we approach our 50th anniversary, we still follow the same approach,” Takeda emphasized. “We intend to continue this total commitment to maintaining the gardens so that visitors to the museum will be moved when they view them.”