Are Japanese Crested Ibises Ready for the Next Stage in Breeding? 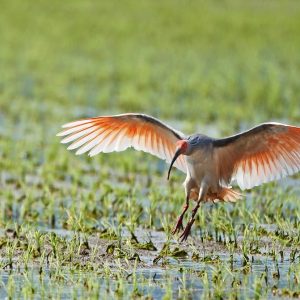 The Japanese Ministry of the Environment announced on June 6 that the number of Japanese crested ibises living for over one year on the island had exceeded the target 220. The goal was achieved two years ahead of schedule.

However, the lack of genetic diversity remains a matter of concern. The endangered species now living and breeding in Japan—two males and three females—are all descendants of five crested ibises presented by China.

Although breeding is systematically carried out in Japan, the relationship of the parent birds in the country are basically nieces and uncles or nephews and aunts, when figuratively compared to humans. For those bred in the wild, some offspring are born from sibling pairs.

In the midst of this circumstances, and 11 years since the last donation, it was agreed at the Japan-China summit meeting last May that China would gift another pair of crested ibises—one male and one female—to Japan.

Professor Hisashi Nagata of Niigata University, an expert in the study of the ecology of crested ibises, explains, “The donation is very much appreciated.” However, he adds with visible worry, “The type of their genes are what’s most important.”

Japan hopes to receive birds with genes different from that of the first five, but China has not yet provided any genetic information.

The new pair of crested ibises will arrive as early as this year. The two birds are not a couple—each is expected to find a mate at the center on Sado Island.

A memorandum between Japan and China states that some bred birds—possibly as many as half the offspring from the new pair—shall be returned to China.

“Releasing their offspring back to the wild will take around five years,” said Nagata. The process takes a long time because the birds that are able to remain in Japan will become brood stock, and it is when their offspring grow into adult birds that they finally becoming eligible for reintroduction to the wild.

It is known from 10 years of monitoring that crested ibises hatched and bred in their natural habitat have higher survival rates and breeding achievements compared to those artificially reared by humans.

“From now on, quality over quantity is essential when releasing the crested ibises to the wild,” Nagata emphasized. A breeding program that anticipates the future of Japanese crested ibises is in demand.