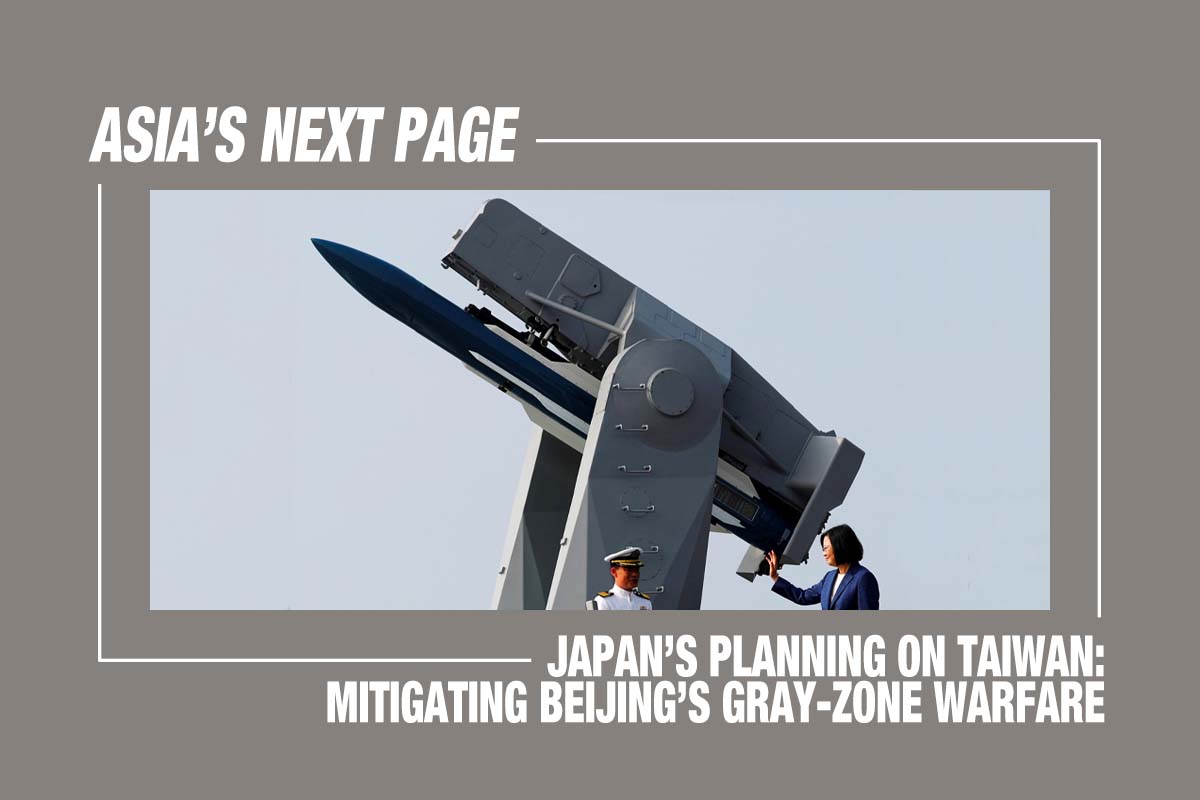 Taiwan's President Tsai Ing-wen waves to the media aboard the PFG-1112 Ming Chuan, a Perry-class guided missile frigate, after a commissioning ceremony at Kaohsiung's Zuoying naval base, Taiwan. REUTERS/Tyrone Siu

China under Xi Jinping has been through rapid economic growth, giving it increased leverage to engage more assertively in questions of its territorial and maritime claims. While a multitude of diplomatic, military and strategic tools have been employed in pursuit of its goals lately, none has been as consistent as the gray-zone tactics it has resorted to over the last decade.

By using military and non-military means of coercion, Beijing has systematically established its presence as a strategic challenge to the status quo and as a threat to multiple actors within the realm of international security. Motivated by its historical claims in regard to the South and East China Sea (ECS) and its “One China” policy, China’s unrelenting use of gray-zone warfare tactics against Taiwan have raised alarm.

Heavily compromised cross-strait relations pose a threat to Japan, whose national security is intrinsically linked with that of Taiwan. As the Taiwan crisis rapidly escalates, how can Japan mitigate Beijing’s gray-zone tactics and ensure its own national security?

Referring to threats that do not amount to an armed attack, Japan’s 2021 Defense White Paper significantly emphasizes the importance of mitigating gray-zone actions.

Tokyo essentially defines a gray-zone situation as one wherein a country confronts another over territorial, sovereign, maritime interests or other economic interests by forcefully demonstrating its presence. Identified as neither peacetime nor contingency situations, Japan recognizes the activity as “part of inter-state competition,” harboring “the risk of rapidly developing into graver situations without showing clear intentions.” Accordingly, Japan’s white paper calls for increased concern over the disputed Senkaku Islands (referred to as Diaoyu by China), considering China’s growing gray-zone activity to strategically assert its presence in the region.

China’s increasingly threatening approach towards Taiwan has resulted in the need for a rigorously strengthened defense posture for the latter. The second Taiwan Quadrennial Defense Review (QDR 2021) under President Tsai Ing-wen focuses on the increased complexity and precarity of the situation in the region, exacerbated by Chinese gray-zone tactics. Beijing’s intrusion of Taiwanese airspace and maritime assets, along with non-conventional cognitive and cyberwarfare, are explicitly cited as the main threats to Taiwanese national security. As of October 2021, a record 150 aircrafts have been sent into Taiwanese airspace by Beijing, including nuclear-capable H-6 bombers.

China’s intrusive activity over Taiwan has occurred in tandem with threats from Xi on the possibility of a forceful unification with Taiwan, potentially via military coercion. China’s gray-zone tactics in pursuing this goal, while contradictory to Xi’s preference of a “peaceful national reunification,” are in line with statements made by him during the 2021 centennial speech, as well as his earlier mention of the possible use of force in 2019.

During the November 2021 virtual summit between President Joe Biden and Xi Jinping, Xi reiterated Beijing’s unwavering commitment to reunification, as well as the possibility of taking “resolute measures” toward that end. Furthermore, the highly anticipated Sixth Plenum’s strongly-worded texts, “Resolution of the CPC Central Committee on the Major Achievements and Historical Experience of the Party over the Past Century,” significantly focused on the Party’s advocacy of “basic principles of peaceful reunification” of Taiwan with mainland China.

The Taiwan question is therefore an unequivocal priority for the Chinese Communist Party (CCP) in terms of both domestic and foreign policy, with a large part of Xi’s legacy dependent on its outcome. Additionally, its resolution will reflect heavily on how the Senkaku Islands dispute may eventually play out, thereby hugely impacting Japanese national security and sovereignty.

Increasing incursions of the waters around the Senkaku Islands by the Chinese Coast Guard (CCG), which has quasi-military status through the recent Chinese Coast Guard Law (CGL), contribute to worsened cross-strait ties and regional security. The CGL’s inconsistency with international law was highlighted by Japanese Defense Minister Nobuo Kishi in the latest defense white paper, as it provides the CCG with ambiguous capabilities which may potentially lead to all-out armed conflict.

Gray-zone activity targeting the Senkaku Islands by the CCG under this framework indicates China’s growing assertiveness in the region. Moreover, Taiwan’s close proximity signifies a huge threat to Japan in the event of conflict spilling over to Nansei Islands, a mere 170 km away from Taiwanese territory.

Therefore, Japan’s role in regional security is of increasing importance as tensions in the Taiwan Strait rise. Interestingly, according to a Taiwanese Public Opinion Foundation poll, most Taiwanese people (58 percent) believe that Japan would intervene and come to Taiwan’s aid should China invade. Only slightly below the United States (65 percent), this number shows Japan’s key role in the China-Taiwan bilateral dynamics ー despite Tokyo not yet recognizing Taiwan as an independent state and its postwar constitution strictly limiting overseas military activities.

While Prime Minister Fumio Kishida explicitly stated his preference to refrain from commenting on a hypothetical ‘Taiwan crisis’” in October 2021, Japanese preparedness is crucial for deterrence in the region. Mere proximity to Taiwan will likely draw Japan directly into responding to the conflict.

As Japan’s longest serving foreign minister, Kishida brings to the table knowledge of the security and political architecture of the region, as well as an intricate understanding of the nuances attached to the CCP-Taiwan-Xi ideological and personal victory angles. His administration remains focused on building on Shinzo Abe’s legacy under a continuity policy that Yoshihide Suga also adhered to. Identifying Taiwan as Japan’s “next big problem,” Kishida highlighted its importance during his campaign.

More recently, in November 2021, Kishida stated that Japan must “do whatever is necessary to ensure we are prepared and have legislation in place” to deal with the start –or aftermath –of an aggravation in the Taiwan crisis. While the Self-Defense Force (SDF) capability remains limited by Japan’s postwar constitution, the National Defense Program Guidelines (NDPG) in the 2021 white paper account for “priority capability areas in strengthening defense capability”. A dedicated section on “from peacetime to “gray-zone” situations” has been implemented in the eventuality of a need to mitigate heightened gray-zone activity, indicating Tokyo’s contingency preparedness.

There are certain key areas for Japan to focus on vis-à-vis China’s prolonged gray-zone antics and potential war-like situation with regards to Taiwan. Tokyo must first implement a strategy to deal logistically and systematically with gray-zone situations that it projects will become “graver” with time.

While Kishida supports the idea of amending Japan’s postwar constitution, persisting domestic realities will not lead to quick results. Until then, the SDF must enhance its presence steadily via bilateral and multilateral exercises to demonstrate Japan’s power. Exercises with “like-minded” Quad partners India, Australia and the U.S. are positive steps in this direction.

Leveraging the SDF’s capabilities to conduct intelligence, surveillance and reconnaissance around Japan and the Taiwan Strait are crucial. Being able to employ vital deterrent options to prevent escalation remains crucial, too.

Leading dialogue with other regional powers –especially the Quad –to deal with gray-zone antics in a symmetrical, measured response that evolves carefully could be recommended. China’s gray-zone activities in the East China Sea, for instance, properly began to gain momentum in 2012. Beijing’s push on this front has hence been a long campaign, starting from ten air incursions in a year to hundreds now.

A response to Beijing’s tactics would also have to be lengthy, ultimately proving to be taxing for China itself to push back alone, especially if a symmetrical counter is multilaterally driven.

As Taiwan attempts to build military deterrence, expanding it to the Chinese coast and identifying the People’s Liberation Army’s (PLA) weakness to be in the “phase of sea transit”, another major area of focus for Japan emerges regarding civilian security. The SDF have reportedly conducted tabletop exercises regarding the Taiwan scenario. Should the PLA attack both Taiwan and Kadena Air Base simultaneously —thereby occupying the Senkaku Islands —Japan’s right to self-defense would be focused on evacuating any and all Japanese nationals from both Taiwan and vulnerable Japanese islands to safety.

China’s gray-zone actions have been largely directed towards these maritime disputes:

China and Taiwan are claimants on most of the disputes. Beijing’s use of military intimidation, paramilitary activities, employment of state-controlled enterprises to promote Chinese interests (especially on natural resource extractions), border manipulation, information operations, diplomatic strategies and economic coercion have played a huge role in Chinese intimidation using gray-zone antics in the Indo-Pacific.

These activities have impacted small and middle powers in the region, and severely threatened regional security for Taiwan and Japan. The inclusion of Taiwan in Japanese security considerations is paramount, as is the involvement of the U.S. in facilitating meaningful security policy coordination between Taipei and Tokyo.

China’s maritime activity has exacerbated the requirement for a cohesive Indo-Pacific security calculus. As the threat perception deepens due to China’s actions in relation to Taiwan, states will look to Japan and the U.S. as they come directly in the line of fire.

Xi’s forthrightness in communicating Beijing’s intention to reunify with Taiwan at the cost of an all-out conflict calls for increased coordination between Japan, Taiwan and the newly formulated AUKUS (Australia-United Kingdom-United States) alliance. Strengthened alliance cooperation could have a major impact in deterring further gray-zone activity from Beijing in disputed territory and maritime domain.

Moreover, Japan must capitalize on its engagement with Taiwan on security cooperation during the current Taiwan administration. The event of a potential change in Taiwanese leadership could lead to cross-strait reengagement with Beijing, diminishing Japan’s mitigating role in the region.

China’s steady onslaught of gray-zone warfare coupled with its resolute goal of Taiwanese reunification has exponentially increased the possibility of conflict in the region. While this is a cause for concern for all states in the Indo-Pacific, Japanese interests are directly at stake.

As Xi continues his attempt to solidify his legacy, the threats to claimants in the aforementioned disputes are impossible to gauge completely. By focusing on strengthening its response to gray-zone activities through increased security cooperation, and by actively engaging in deterrence with other actors in the region, Japan is well capable of mitigating Beijing’s threats to regional security.

Dr. Jagannath Panda is a Research Fellow and Centre Coordinator for East Asia at the Manohar Parrikar Institute for Defence Studies and Analyses (MP-IDSA), New Delhi. Dr. Panda is also the Series Editor for “Routledge Studies on Think Asia”.