[Asia’s Next Page] Suga, India-Japan Ties and the Domestic Drawing 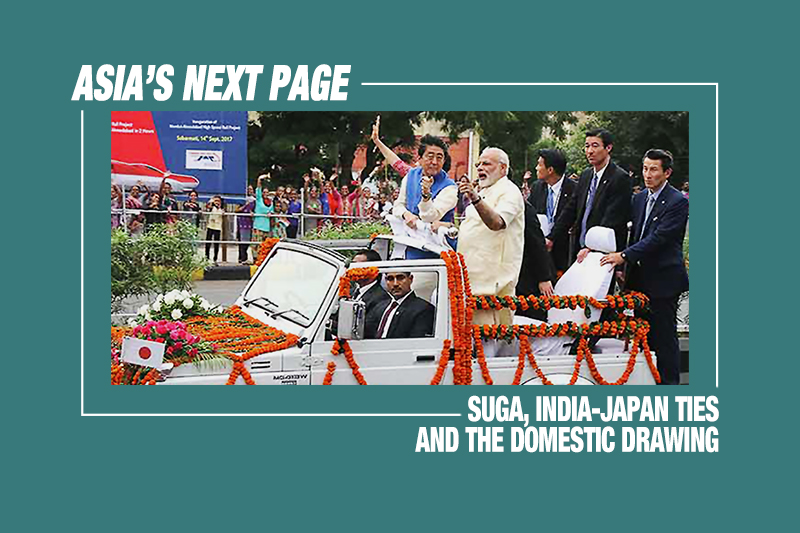 Japan’s longest serving Prime Minister Shinzo Abe etched a global leadership role for Tokyo by taking up the mantle in areas like regional and international trade integration. At the same time, he built personal trust and respect driven ties with his counterparts in partner countries.

Japan’s newly appointed prime minister, Yoshihide Suga, has his work cut out for him. As Abe’s chief cabinet secretary, Suga undoubtedly understands the need for continued synergy in India-Japan ties, especially under the changing geopolitics and heightening tensions in the region. Yet, the extent to which Tokyo and New Delhi can push their ties forward under Suga and Modi, while maneuvering a precarious post-COVID-19 environment, remains to be seen.

The emerging trajectory for India-Japan relations was laid out in Modi and Suga’s first telephonic interaction, held on September 25, 2020. Both leaders not only expressed their intention to bolster ties further based on “mutual trust and shared values” but also emphasised their commitment to create resilient supply chains that build an “economic architecture of a free, open and inclusive Indo-Pacific”. Modi and Suga also decided to push forward with the Mumbai-Ahmedabad high-speed rail project that has been significantly delayed, while welcoming a memorandum for better mobility of skilled professionals over time.

The key challenge for both Tokyo and New Delhi will not only be to sustain the synergy that Abe brought to India-Japan ties, but also to take advantage of the emerging regional and global power dynamics to enhance joint cooperation in order to further their shared goals. Under Abe, Japan emerged as India’s third-biggest investor with total foreign direct investment (FDI) growing by $30.75 billion USD in the past decade.

Apart from the growth in volume, Japan’s investments also became increasingly diverse, with both states finding an alignment of interests under India’s Act East Policy (AEP) and Japan’s Expanded Partnership for Quality Infrastructure (EPQI)—that led to new avenues of collaboration in India’s north-eastern region and a proposed “continental connect” with Africa.

Additionally, engagement in naval exercises like Malabar and JIMEX, security dialogues like Quad 2.0 (which is largely credited to Abe) and the Japan-India 2+2 Foreign and Defense ministerial meetings have all progressively expanded the scope of their security partnership. Trilaterals like Japan-America-India (JAI) and Australia-Japan-India (AJI) have also reinforced their broader regional ambitions.

Despite this progress, India-Japan ties are yet to reach their true potential as a global partnership. For one, Abe’s primary aim of revising Japan’s postwar constitution (that is, its Article 9) and giving the country a right to institutionalize its defense forces has remained unfulfilled. Now, with both states recalibrating their foreign policy to adapt to the new (and arguably, severe) geopolitical environment, particularly with regard to their shared concerns of China’s recent (and increasingly revisionist) adventurism, there exists a unique opportunity for Tokyo and New Delhi to maximize these unrealized possibilities and enhance their partnership further. With Abe’s resignation, the mantle now falls on Suga.

As Suga deals with the devastating fallout of the pandemic, he must identify areas where increased synergy with New Delhi can spur mutual economic growth as well as deepen security cooperation under their shared Indo-Pacific visions—India’s drive for inclusivity and Japan’s Free and Open Indo-Pacific (FOIP) outlook. The Quad 2.0 meeting, which Japan is hosting from October 6, offers a crucial multilateral platform for Modi and Suga to start building their own ties that can dovetail into greater synergy for both countries.

At the same time, a greater onus of promoting sustained cooperation falls on New Delhi itself. The surge that propelled India-Japan ties was largely a product of Abe’s Asia policies factoring India in a significant position. Driven by his emotional bond with India, Abe, in contrast to his predecessor Junichiro Koizumi, enhanced Japan’s conception of the region to create a “broader Asia” which included India. In fact, in his book titled Towards A Beautiful Japan, Abe described Tokyo’s ties to New Delhi as “the most important bilateral relationship in the world”.

However, with Suga at the helm of Japanese politics, India must take into consideration the potential structural changes in India-Japan relations. Even if Japan’s foreign and defense policies remain more or less the same, the possibility that Suga takes a more domestic approach against Abe’s multinational outlook cannot be overruled.

Further, given his moderate political ideology, Suga is unlikely to make any move which could irk China, and thus might not hold a firm policy towards Beijing. With New Delhi and Tokyo’s shared concerns about an increasingly assertive Beijing being a key motivation for both the countries to collaborate, India-Japan ties may witness a slower pace under Suga.

Most importantly, Suga is at present expected to stay in office only until Japan’s next general elections in September 2021. After that, India may have to deal with a new government. Given these challenges, India must become more proactive and assume a leading role in enhancing the partnership. Consequently, the need to make greater efforts under the Suga government in the coming year is ever-more significant.

For India and Japan to ensure sustained development in the bilateral partnership, it is important to materialize the initiatives envisioned by Modi and Abe.

The speedy finalization of the India-Japan Acquisition and Cross-Servicing Agreement (ACSA) agreement between both countries during Abe’s last days in office was a good start. Indian Foreign Minister Dr. Jaishankar stated post the long-awaited actualization of the ACSA that the two countries are taking a more active interest in third-country cooperation now (such as Sri Lanka, Bangladesh and Myanmar).

Additionally, both countries must also steer the partnership beyond bilateralism to truly realize the significance of their “Special Strategic and Global Partnership”. Despite his extensive efforts, Abe was unable to rekindle the “Eurasian diplomacy” conceptualized by former Japanese Prime Minister Ryutaro Hashimoto. This constrained the synergy between Japan’s “Central Asia plus Japan” and India’s “Connect Central Asia” policy from imbibing a more profound character.

For Suga, leading RCEP negotiations with India—in a way that offers India genuine concessions and puts it on an equal footing—could be a key area to achieving success in this field. At the same time, India’s inclusion in the RCEP could also potentially pave the way for New Delhi to join the Comprehensive and Progressive Agreement for Trans-Pacific Partnership (CPTPP) one day, creating additional avenues of bilateral cooperation and actualizing the relationship’s global potential.

Post-COVID economic difficulties in both countries, as well as an increasing disconnect from China, are factors that can only strengthen this partnership. India’s “Aatmanirbhar Bharat” and Japan’s manufacturing exodus from China under a $2.2 billion USD stimulus package can find increased synergy, with Tokyo already offering incentives to companies who relocate to India.

Moreover, under the new regional security situation, both states seek to shape a multipolar order wherein they can maintain their strategic autonomy. In order to do so, both states must vitally enhance cooperation on the global stage by further building their presence in mini-lateral groupings, such as the trilaterals AJI and JAI, as well as the Quad.

One step in this direction could be Suga’s support to New Delhi in its revised UNSC bid for permanent membership, which has been undermined repeatedly by the “Coffee Club” under the ambit of G-4 (with Brazil and Germany). A shift in strategies by building more bilateral synergy in the form of asymmetric alignment is needed on the part of both countries. Having served as Abe’s right-hand man, the public face of the administration and yet having managed to keep a low-profile, Suga understands the importance of strategic alliance building.

Suga has proven himself an adept handler of people – be it diplomats or ministers – and can be expected to reflect similar dexterity while dealing with international leaders. Such an approach may well work and re-instil confidence in India about Tokyo, while Modi’s active outreach to Suga will provide encouragement towards growing India-Japan ties beyond Abe.