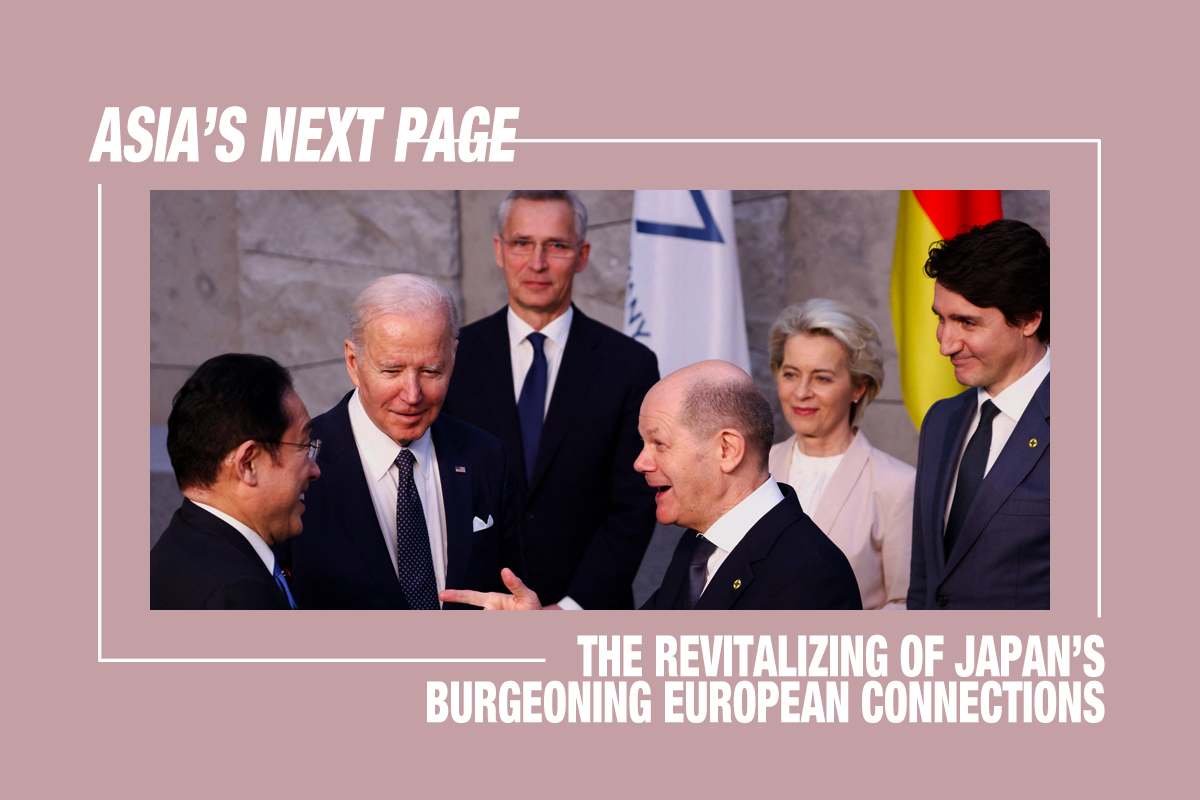 The shift in global power was already in motion, but found new momentum with the ongoing Ukraine war. Along with the emerging threats and challenges in the ever-volatile Indo-Pacific and the unstable European landscape, it offers Japan an opportunity to recalibrate its foreign policy.

Given the major political and security churning going on in Europe, the region must be a focal point of Japan’s policy reassessment.

Europe is not only a global economic power, but a key player in the emerging global security environment seeking geopolitical credibility. Considering its current tilt toward the Indo-Pacific, Tokyo would not be amiss to aspire for a greater presence in the European Union’s foreign policy ambit.

Even though the investment and trade opportunities provided by China are too valuable for the EU to throw away (China has been EU’s top trading partner in recent years), ties with China are deteriorating. Their in-principle comprehensive agreement on investment (CAI) stands stalled today – and the threat from China cannot be wished away. Despite the continued bonhomie of France and Germany with China, growing mistrust in EU-China ties has created a vacuum that Japan can capitalize.

In particular, there is significant opportunity for Japan and the EU to cooperate to limit China’s Belt and Road Initiative. The BRI is a largely non-transparent and corrupt project that threatens the values-based model of multilateral infrastructure financing and exploits dire economies by building debt traps.

Despite Japan’s history of granting developmental aid to regional states, it has found it difficult to match the massive funding available under the BRI. Balancing China’s BRI outreach, therefore, requires a joint effort. And with its vast economic resources, the EU can be a vital partner – such as via mutually reinforced connectivity investments, the Global Gateway (that seeks to shore up developmental projects by investing about € 300 billion EUR ($330 billion USD), and the US-led Build Back Better World (B3W).

Since its inception in 2016, Japan’s Expanded Partnership for Quality Infrastructure (EPQI) has been dedicatedly working to meet high demands, such as attempting to reduce infrastructure needs of Asia, by following an open and transparent mode of engagement. According to the Asian Development Bank (ADB) those investments will exceed $22.6 trillion USD through 2030.

By building on its role as a long-standing, trusted, and stable official development assistance provider (ODA) focused on sustainable connectivity and infrastructure development, Japan can lead the way for Europe.

Over the years that the EU-Japan Economic Partnership Agreement (EPA) has been entered into force (2019), trade between the two has reached € 125 billion EUR ($137.5 billion USD). During the Ukraine crisis, Tokyo has projected itself as a stable partner, too, with solidarity through sanctions, and also by supplying surplus liquefied natural gas (LNG) to Europe.

In 2021, Japan was the seventh and eighth largest partner for Brussels in exports and imports; so, there is still scope for improvement in trade. Potential areas of synergy encompass energy security, including renewables, and areas like agricultural products where market access can be improved. As major global economic powers struggling to confront the global shocks, both can cooperate to build sustainable and resilient critical supply chains.

Furthermore, the EU-Japan digital partnership is a rather vital but less visible aspect of their EPA. Japan could adopt an integrated approach in the digital (and green) transitions, allowing cross-border free flow of data for trade while ensuring privacy, security, and intellectual property rights.

In the wake of the Ukraine war, Japan has emerged as one of, if not the, strongest Asian voice against Putin. It has allowed for the strengthening of the Japan-US-EU trilateral and bilateral alliances, making China wary.

Much like the European Union, Japan has a strong commitment to values of democracy, a rules-based order, economic multilateralism, and a free and open regional and global order. Convergence over such shared values can prove lucrative for a Europe-Asia connection, which requires an integrated policy approach.

In the troubled European regions like the Western Balkans, where Japan already has a cooperation initiative, it could work with the EU in a tailored partnership to counter both Chinese clout and Russian meddling. Effectively, Tokyo must build on this present momentum in a bid to improve ties with a geopolitical Europe that is seeking greater credibility and autonomy in global strategic affairs.

At present, the Japan-EU Strategic Partnership Agreement (SPA), signed in 2018, is pending final ratification by all member states, highlighting a need for greater focus on bilateral ties. Tokyo will need to actively promote the SPA as a framework for comprehensive cooperation between the two actors, including in critical sectors like defense, cyber space, emerging technology, and supply chains.

Japan can also contribute to a stable transatlantic partnership by ensuring an independent outlook ー one not colored by the US lens ー especially as Brussels looks to acquire greater strategic autonomy.

Japan already stands as an influential power in Asia, and is swiftly solidifying its reliable economic power status in Africa, too, through developmental activity. Over the past decades, Tokyo has slowly but surely built itself as a democratic, liberal state, and it is now on a quest for achieving a great power identity.

Its main threats in the neighborhood are China and North Korea, both nuclear states. Therefore, it seeks to solidify its security architecture. Although its alliance with the United States is strong, it would be prudent to capitalize on Europe’s need for autonomy and credibility. Japan’s robust relationships with India and the Association of Southeast Asian Nations (ASEAN) can also help the EU emerge as a credible security provider.

Building on its strong support of Ukraine and condemnation of Russia, including imposition of international sanctions in line with Washington and Brussels (unlike its reluctant stance in Crimea in 2014), Japan can look to establish stronger strategic ties with the EU and emerge as its gateway to Asia. Both Japan and the EU must enact a robust and holistic plan of action, much like their 2001 Action Plan, to guide their multifold and nuanced cooperation in the future.