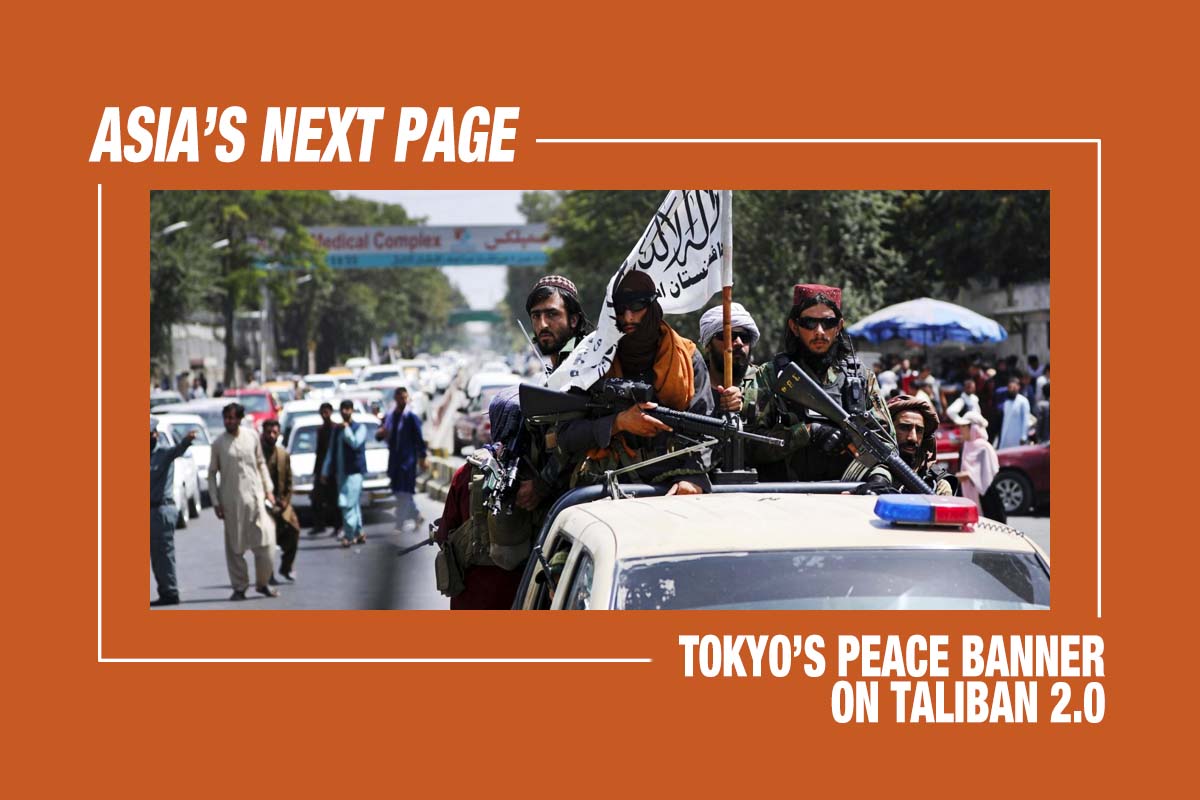 The United States’ rather hasty withdrawal and the Taliban’s swift takeover to form a new (interim) government have put Afghanistan at the center of global focus. Given its strategic interest in Afghanistan, Tokyo is undoubtedly monitoring the crisis in the region closely. Even as Japan’s outlook on the Taliban remains a tertiary factor in international calculus, Tokyo’s continued economic presence is a primary matter of need for Afghanistan.

Theoretically, Japan is a distant, non-critical — even minor — power in Afghanistan’s geopolitics. Tokyo’s outlook on the Taliban is dictated by its own national interests in the country, which primarily revolve around supporting its alliance partner, the United States, and to an extent keeping a close eye on the rising Chinese presence in the region.

Practically however, Tokyo’s two-decades-long investments, strong economic linkages, and growing presence in West Asia and the Middle East make it a critical economic power. In other words, a trade, investment and aid connection has given Japan independent sway in Afghanistan and its governance.

With such an invested stake in the region, officially Japan has been cautious in responding to the developments in Afghanistan and reserved in offering any clear and loud statements on the new Taliban government (Taliban 2.0) in the region.

While expected, the sheer rapidness of the Taliban advance came as a shock that dealt a major blow to Tokyo. At present, Japan, like many other major powers, has held off on recognizing the Taliban as Afghanistan’s official (interim) government, and has not shown any strategic overture toward openly engaging with Taliban 2.0. Nevertheless, Tokyo will most likely not be entirely against continuing engagement, or beginning a new chapter in Japan-Afghan ties, even under the Taliban’s rule. After all, Japan maintained a low-profile engagement during Taliban 1.0 (1996-2001).

In this regard, how does Tokyo perceive Taliban 2.0, and what would be Japan’s future outlook towards a Taliban-led Afghanistan?

With “peace” being a catchphrase in its post-war foreign policy, Tokyo has strongly and consistently advocated for a peace and reconstruction process in Afghanistan, supporting the American presence in the region.

Officially, Japan has long called for an “inclusive government” in Afghanistan. Promoting a “durable and comprehensive peace” mechanism to support a “peace” process has driven Tokyo’s Afghanistan policy, in line with the American approach.

Given its preference to associate with the American global strategic plan, Tokyo’s outlook on the U.S./NATO troops withdrawal and the rise of Taliban 2.0 in Afghanistan has become a matter of strategic discomfort. For one, Japan is no doubt concerned that the removal of American troops from the region will strain the Japanese economy, weakening its power vis-à-vis a rising Chinese presence. Engaging with the Taliban thus comes necessary for Tokyo to protect its regional interests and investments.

This focus on peace with the Taliban is heavily drawn on Japan’s past practices, particularly its evolving security outlook on world affairs. Japan’s 2002 Vision for Consolidation of Peace, announced at the one-year anniversary of the Bonn Agreement, was instrumental in laying out Japan’s peace-focused Afghan outlook.

This vision had three key pillars: the peace process, domestic security, and humanitarian reconstruction. Accordingly, since 2001, Japan has provided around $6.8 billion USD in official development assistance (ODA) for the reconstruction of infrastructure across Afghanistan. A little over a decade later, Prime Minister Shinzo Abe further built on this Vision via his diplomatic “proactive contribution of peace” initiative, which positioned Japan as a proactive contributor to peace in its 2013 National Security Strategy (NSS).

However, even as Japan recognizes the importance of engaging with the Taliban to continue promoting peace and protecting Japanese interests, it also realizes that the Taliban 2.0 rise has certainly put such an ambitious peace process into jeopardy. As the Taliban 2.0 attempts to find its footing, the country will remain unstable, and the regional security environment in flux. Like most regional stakeholders, Tokyo has little choice except to start thinking about how to stay engaged.

Afghanistan has played a vital role in Japan’s identity politics. Tokyo’s recalibration to deal with a post-9/11 geopolitical order, which enabled it to chalk out a new identity for itself as a strategic ally to the United States, is a key example of how Afghanistan shaped its identity quest.

This took place via a timely implementation of the Anti-Terrorism Special Measures Law, where Japan’s proactive peace advocacy policy enabled it to build a global identity as a “peace loving nation”.

At the same time, this new identity was realized through a focus on peace, thereby limiting Japan to humanitarian aid and reconstruction efforts in Afghanistan. Thus, involvement in security-driven peacebuilding only saw cautious participation by Tokyo in the country.

Opportunities in third-country cooperation, which could have seen tremendous success in Afghanistan via Japan’s Expanded Partnership for Quality Infrastructure (EPQI) in collaboration with countries like India, were perceived warily. For instance, even as Tokyo showed interest in Chabahar port, it refrained from investing due to U.S. sanctions on Iran and security stressors in Afghanistan.

Factoring In the New Taliban Government

Considering Japan’s past approach, Tokyo will likely refrain from involving itself in major direct investments in Afghanistan under Taliban 2.0, especially considering its doubts over the legitimacy of the newly formed government. Japan had announced plans in 2020 to continue providing ODA amounting $180 million USD per year to Afghanistan within the period of 2021-2024, similar to its level of aid to Kabul for the past four years. However, official recognition of the new Afghan government would be required to continue such aid.

If not officially recognized, Japan’s continued aid to Kabul could be viewed as de-facto recognition of the Taliban government. Yet, the announced new Taliban cabinet includes names that are on U.S. sanction lists and has received only a lukewarm reaction from Tokyo. This is likely to further limit the degree of recognition given to the Taliban as an official political entity, even as the Taliban shows an inclination to maintain good relations with Japan.

The Taliban cannot deny that Japan’s ODA and active presence of non-governmental organizations have been crucial to rebuilding Afghanistan. As the group looks to sustain a government in the country, support from long-time aid partners like Japan will be crucial. Therefore, should Tokyo play its strategic cards right, it could chart a position of strong political and economic clout in Kabul, even holding sway in softening the Taliban’s radical policies to ensure continued Japanese assistance.

Tokyo’s EPQI is the only infrastructure initiative— other than China’s Belt and Road Initiative (BRI)— that Afghanistan can turn to. Japan’s reputation and prowess as an aid partner is well-established via its presence in Southeast Asia and South Asia. Moreover, Japan has great potential in building people-oriented rural development in Afghanistan, as it did under Dr. Tetsu Nakamura via the Peshawar-kai’s (PMS) Green Land Project (Midori-no-Daichi Keikaku). The project successfully created 16,500 hectares of farmland, a community of 650,000 people, and an area free of violent conflict in Afghanistan.

Lastly, Tokyo’s Afghanistan engagement assumes added importance in context of its larger ties with the Middle East and North Africa (MENA) region that is crucial to Japan’s energy security calculus. In fact, Tokyo has taken several steps to deepen and broaden its engagement with the region, such as through the Japan-India Platform for Business Cooperation in the Asia-Africa Region.

Hence, tempering the Taliban to sustain peace and stability in the region and protect its growing energy interests is vital. The Middle East accounts for almost 90 percent of Japanese oil imports, with Saudi Arabia, the United Arab Emirates, and Iran being leading import partners. While Afghanistan may not be a direct oil supplier, the Taliban’s victory could provide impetus to terrorism activities in the region, causing instability and hurting Japanese interests. Such a calculus will no doubt feature prominently as Japan shapes its Taliban engagement policy.

Therefore, like several other major stakeholders, Japan faces a crucial dilemma in its Afghanistan approach: how can it engage with the Taliban 2.0, especially if they violate human rights, while protecting its geopolitical, strategic and economic interests in the country and the region?

The Taliban’s appointment of questionable persons to its cabinet has done little to instill confidence in the group’s future plans.

Yet, moving forward, Tokyo must look for ways it can continue to interact and engage with the government so as to maintain an opportunity to influence the group’s future behavior and not lose its strategic posture in the country. Japan’s relocation of its embassy from Turkey to Qatar (where the Taliban also has an office) and provision of $65 million USD in aid via international organizations are helpful steps in this regard. Cooperation with like-minded stakeholders, such as India, and the international community at large also will be crucial to such objectives.

Dr. Jagannath Panda is a Research Fellow and Centre Coordinator for East Asia at the Manohar Parrikar Institute for Defence Studies and Analyses, New Delhi. Dr. Panda is the Series Editor for Routledge Studies on Think Asia.