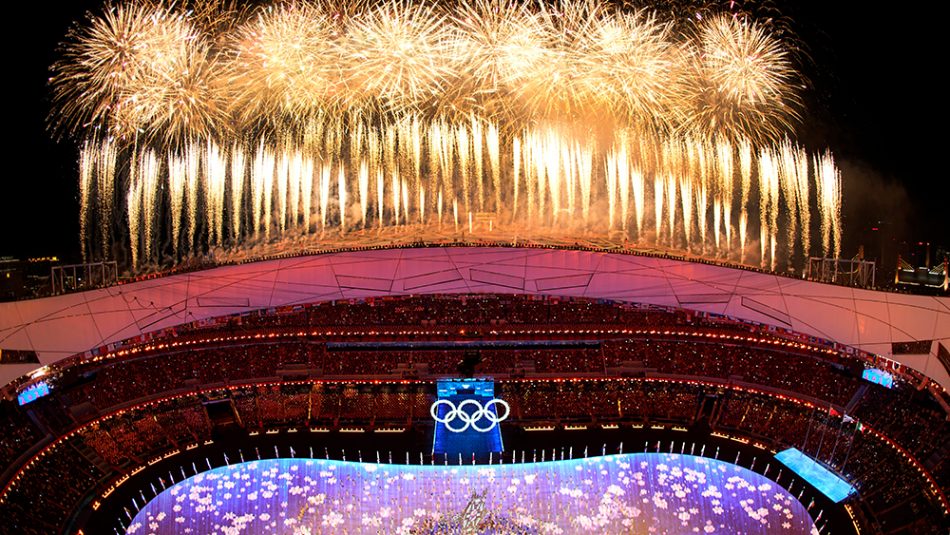 Fireworks at the Beijing 2022 Winter Olympics on February 20.

On February 20, the Beijing 2022 Winter Olympic Games came to a close.

After 17 days, with over 2,700 athletes from 91 countries and regions participating in seven sports and 15 disciplines, the Winter Games were passed on the torch. They were the second Olympics to take place under COVID-19, after the Tokyo 2020 Games.

Given the restrictions, the Games in Beijing were organized in a closed bubble system, with the torch relay and the ceremonies significantly reduced in size and grandeur.

The Closing Ceremony of Beijing 2022 at the Bird’s Nest Stadium reflected the situation, carrying the theme of the “Snowflake.”

International Olympic Committee President Thomas Bach also echoed the mood of the times in his closing speech, complimenting athletes on their solidarity, and calling on global leaders to follow their example.

“In this situation, we call on the international community: give equal access to vaccines to everyone around the world,” exhorted Bach.

This edition of the Games was also home to the nasty side of sport. The world watched as 15-year-old ROC ice skater Kamila Valieva, despite testing positive to a banned substance and subject to investigation, was allowed to compete and crumpled under the pressure in the women’s individual final.

Despite the unusual circumstances, when the athletes came into the stadium after the flagbearers procession, the festive and relaxed atmosphere was as infectious as ever, and a joy to watch. The videos reliving the successes, the toils and the many emotions of the Olympians were moving.

For Japan, this edition of the Winter Games was the most successful in history, with 18 total medals (of which three were gold, six were silver and nine were bronze).

Kaori Sakamoto, who won the bronze medal in the women’s individual figure skating, commented to NHK following the ceremony: “I am so happy I could participate. Going forward I want to work harder and improve.”

We look at some of the highlights of the closing ceremony below.

Just like the Opening Ceremony, the Bird’s Nest’s light display was in full swing for the festive occasion.

Zhang Yimou was the brain behind the design of the Opening and Closing Ceremonies for Beijing 2022.

The film director had previously overseen the Opening and Closing Ceremonies in Beijing in 2008, making him the first person in history to oversee the ceremonies of two Olympic Games.

RELATED: An Opening Ceremony Lit by Stunning Technology and Marked by the Absence of Global Leaders

With the Olympic flame’s snowflake at the center, the lighting made use of AR to articulate a complicated display of red lights uniting into one.

The director also was the one who chose for the Olympic flame to be contained inside a snowflake shape, which in turn was made up from smaller ones carrying the names of the participating countries in the Games. The choice of minimalistic design, instead of the typical Olympic cauldron, was a move that had taken many by surprise.

Later in the ceremony, the lights drew designs with willows. Willow in Chinese is pronounced the same as the word farewell, thereby indicating the sorrow of separation.

The Medal Ceremony of Cross-Country Ski

Just as with the Summer Olympics, the Closing Ceremony is an opportunity to have the medal ceremony for the last competitions of the Games.

For the women’s category, this was the cross-country skiing 30-km mass start race, where Norway’s Therese Johaug was in a league of her own compared to other athletes. She collected her third gold medal of the Beijing Games at the age of 33.

Johaug was accompanied by US athlete Jessie Diggins, who came second for the silver medal and an ecstatic Kerttu Niskanen for Finland, who snatched the bronze medal.

There was also the medal ceremony for the men’s cross-country 50-km mass start. The competition was shortened to 30 km due to poor weather conditions. The Russian Olympic Committee’s Alexander Bolshunov capped his second Olympic Winter Games by winning his third-cross country skiing gold medal in Beijing 2022. The ROC’s Ivan Yakimushkin was in second place and Simen Hegstad Krueger of Norway grabbed the bronze medal.

A Thanks to Volunteers

The organizers put together a video to thank the 18,000 volunteers who made the Olympics possible. This included the countless people who worked sometimes in minus 20 C in the snow, helping athletes, journalists and participants. They did so by wearing masks, and sometimes a plastic visor, and operating under strict COVID-19 prevention rules.

The organizers showed their gratitude by giving representative volunteers a lantern, to represent the warmth of their welcome to everyone participating in the Games.

The Baton Passes to Milano-Cortina 2026

It was time for the baton of the Olympic flag to go to the next hosting entity: Milano-Cortina.

The 2026 Olympic Games will be taking place in areas which add up to approximately 22 km squared, but span across two different regions of Italy, Lombardy and Veneto, with the cooperation of the provinces of Trento and Bolzano.

To represent this transition, as the Italian flag was hoisted, the pop-singer Malika Ayane sang the Italian national anthem (Inno di Mameli) while accompanied by world-renowned violinist Giovanni Andrea Zanon. Zanon was showcasing his famous Guarnieri del Gesù violin, which is worth more than 5 million euros ($5.658 million USD)

A short performance marked also the passage of the Olympic flag, directed by Marco Balich. Two children pushed together a massive globe over cracking ice.

They also represent the theme of the Beijing 2022 Games, in the slogan “Duality Together.”

It will be the third time that Italy hosts the Winter Games, after Cortina in 1956 and Torino in 2006. The Milano-Cortina Games will also see the debut of ski mountaineering.

A Thanks to the Athletes

As it’s custom, the President of the Beijing 2022 Organizing Committee Qi Cai took the opportunity to thank everyone for the effort in the Games.

“You [the athletes] have participated in these Olympics, supported us, and I would like to thank you,” said Cai. “Over these 17 days, athletes from all over the world, your performances made all the venues shine.”

He stressed the importance the Winter Games had for China, which pledged to have over 300 million people involved in winter sports.

“These games are opening a new era for Winter Games,” he exclaimed, “Don’t forget these Olympics, and let’s open a bright future together.”

Finally, as IOC President, Bach made his remarks to officially close the Beijing 2022 Winter Games. Bach stressed the importance of athletes in sending a positive message to the world.

“You supported each other, even when your countries are divided by conflict,” he said. “May the political leaders around the world be inspired by your example of solidarity and peace.”

Using the world stage of the Olympics, he exhorted world leaders to take initiative in the battle towards ending COVID-19:

“If we want to finally overcome this pandemic, we must be faster, […] we must stand together” he exclaimed. “In this situation, we call on the international community, give equal access to vaccines to everyone around the world.”

Complimenting China for the organization, he also celebrated the development of winter sports in China: “With 300 million people now engaged in winter sports, the Olympic legacy will remain. We welcome China as a winter sports country.”

Ending with the Snowflake

With that, Bach officially closed the Beijing 2022 Winter Games, and the Ceremony reached its climax.

Following a video commemorating the everyday people in Beijing saying goodbye to the athletes (and a sad looking Bing Dwen Dwen, the panda mascot of the Games) the Snowflake Olympic Flame was the center of the show once more, surrounded by the flags of the participating countries.

Over the notes of the song “Snowflake” sung by a children’s choir, the Olympic flame was lowered and extinguished, and fireworks illuminated the skies of Beijing.

On March 4, the Beijing 2022 Paralympics are set to start and continue for ten days.