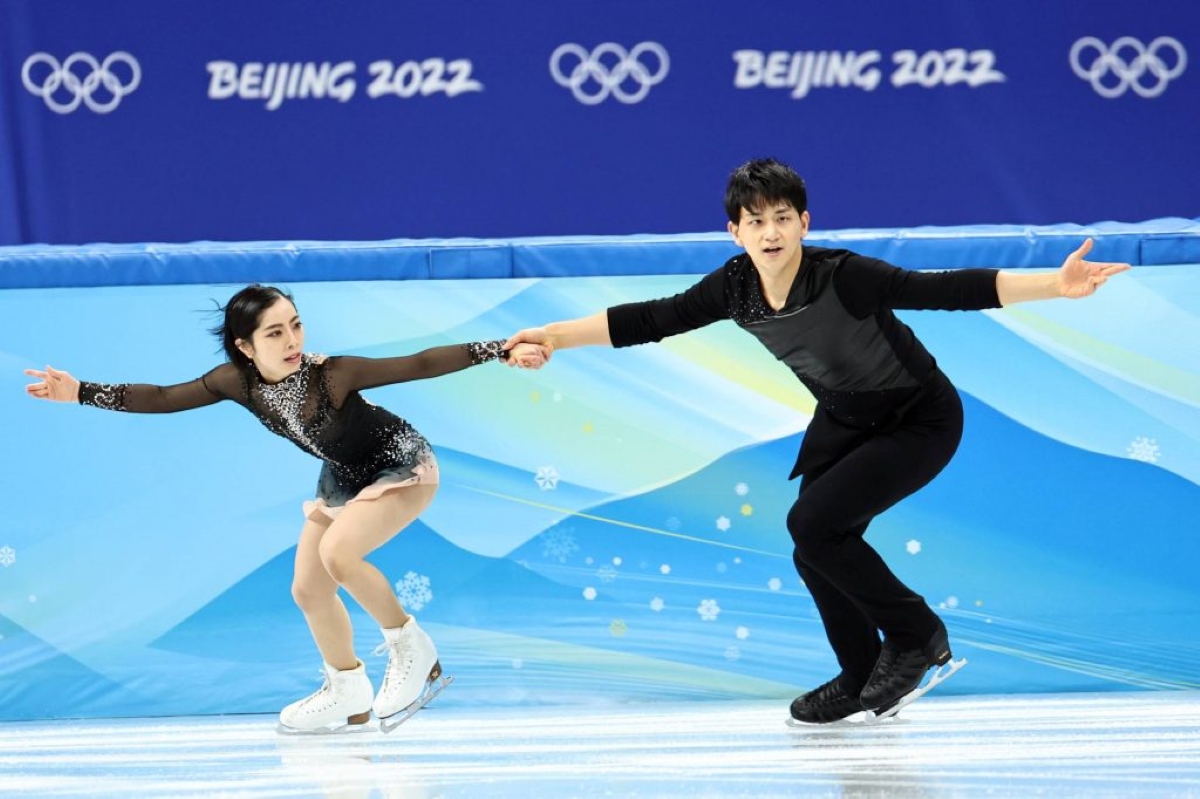 With no sponsor names within camera view at the site, Riku Miura and Ryuichi Kihara skate in the Ice Dance competition at the Beijing Olympics. (Sankei)

In the buildup to the Beijing Winter Olympics, which kicked off on February 4, advertisements by Chinese firms promoting the Games have stood out across Chinese cities and on television.

Conversely, Western and Japanese companies have been much more low-key.

As the global community criticizes the Chinese government over its human rights record, international sponsors of Beijing 2022 have stayed quiet on the issue of China’s abuses.

A female skier struggles as she goes down a slope, but then starts to ski brilliantly after drinking some milk.

The above sequence forms part of a TV commercial by China Mengniu Dairy Co., a firm that was added as a major International Olympic Committee (IOC) sponsor in 2021.

The woman in the commercial is freestyle skier Ailing Eileen Gu. Born in the United States, Gu possesses fashion-model looks, and attracted attention across China before winning a gold medal in freestyle skiing on February 8.

China Mengniu Dairy Co. and many other Chinese firms have been trying to raise excitement for Beijing 2022. However, Western and Japanese companies — which have been absorbed in previous tournaments — have kept a distinctly low profile.

This is mainly because an attempt to show strong support for the tournament could be seen as showing disregard for human rights, given the international criticism of the Chinese government’s human rights abuses in Xinjiang and Hong Kong.

If sponsors were to mention human rights issues, this could trigger a backlash across China.

For example, in December 2021, the US semiconductor firm Intel was criticized in China for asking suppliers not to source products or labor from Xinjiang, and the company ended up apologizing.

With any political statement potentially posing a risk during an Olympic tournament, Toyota — one of the main sponsors of Beijing 2022 — has instead quietly provided about 2,200 vehicles, such as fuel cell vehicles, buses like Toyota’s “Coaster,” and health and welfare vehicles.

Sponsors Will Send Products, But…

At the same time, Toyota has decided to avoid PR campaigns or make any comments on the use of tickets for sponsors during the tournament.

Similarly, Panasonic and Bridgestone are supporting Beijing 2022 by providing products — but they are avoiding PR campaigns in China and choosing not to comment on China’s human rights issues.

Companies that have contracts with IOC

Companies that have contracts with JOC

Ajinomoto has provided products containing amino acids to the Japanese athletes at Beijing 2022.

On a similar note, a spokesperson for a Japanese firm providing sportswear for Beijing 2022 athletes said, “If we can raise our company’s profile through athletes wearing our clothes…,” thereby touching on the delicate advertising situation that sponsors face at Beijing 2022.

“It seems that sponsors have decided that staying silent is the best way to minimize risk,” commented Professor Masahiko Hosokawa of Meisei University.

Arguably, staying silent, combined with the fact that the Olympics is a sports festival, suggests that only a minority would react critically on issues such as human rights.

“However, taking the silent approach in situations other than the Olympics is potentially very risky,” added Hosokawa.

This is because if it emerges under normal business circumstances that a certain company is linked to issues concerning human rights or economic security, that company could be excluded from Western and domestic markets.

“Looking ahead, it will be important for companies that do business with China to conduct thorough assessments of potential risks that could affect the company down the line,” said Hosokawa.

The same could be said for the stance of the Japanese government. The Japan Association of Corporate Executives （Keizai Doyukai) Chairman Kengo Sakurada believes there is no need to make one’s stance clear at the Olympics, but that “a clear message condemning human rights issues and restrictions on press freedom” should be sent out at other times.