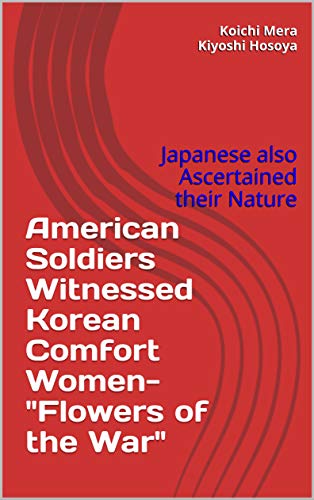 The title merits clarification. The word “flower” is used to depict the true nature of the comfort women, not as forced sex slaves, but as women deserving of praise who provided solace and comfort to weary soldiers returning from the battlefield.

The book contains translations from Japanese into English of a compilation of statements of 20 former Japanese military men and civilians about their experiences with comfort women. These statements were published in a monthly newsletter by the Research Institute for Showa History.

The institute covered various controversial issues in modern history, with its first newsletter published in 1996 and continuing for 155 editions until 2010. This book was authored, edited, and published by the late Dr. Koichi Mera, past director of the Global Alliance for Historical Truth, and Kiyoshi Hosoda, the current director of GAHT-U.S.

The book also contains two official wartime reports of the United States Army: Interrogation Report No. 49 and an interrogation report of a Japanese prisoner of war captured on Guadalcanal.

These 20 statements are based on the personal experiences of each interviewee. There is one very detailed narrative by a noncommissioned officer who was tasked by his commander to investigate a request by a Korean comfort station operator to operate in the organization’s area of responsibility. The noncommissioned officer tells of his visit to other organizations seeking firsthand knowledge of operations and the nature of comfort women.

The book also includes a narrative of a then-young enlistee on a train, having a pleasant conversation with two comfort women going on a holiday trip (hardly the type of activity expected of abducted sex slaves). Other accounts include those of former military officers and other men in various capacities on their experiences with Korean comfort women.

Many of the former soldiers served in China and Manchuria, but those who served in Southeast Asia and the Pacific Islands are also included. There is a common thread in all the statements:

The Role of Zegens — Korean Recruiters

A heretofore unmentioned aspect of the comfort women issue was the existence in Korea of those who recruited comfort women. Referred to as “zegens,” they were members of an organized group that recruited the women, then sold the contracts to comfort station operators and apparently also made the arrangements with the Japanese military. Detailed information on “zegens” is lacking, but they did not operate comfort stations.

The author of the book, Dr. Mera, summarizes it in a closing statement:

The statements of the Japanese military men contained in this volume clearly reveal that the Korean comfort women “sex slave” assertion is false. Rather, the women were praised as “Flowers of the Battlefields.”

Moreover, it should be recognized that the entire collection has a high level of consistency with the United States’ military reports contained in this volume.

Any attempt therefore to obtain compensation founded on assertion of pain and torture is tantamount to fraud on an international scale.

This book is timely in that, just recently, in early May 2020, Lee Yong Soo, a widely-known Korean comfort woman and activist, denounced Yoon Mee Hyang, the former head of Korean Council for Justice and Remembrance of Military Sexual Slavery by Japan, of misappropriating donated funds. Lee Yong Soo was the former comfort woman in the reception line next to South Korean President Moon Jae In, welcoming U.S. President Donald Trump on his official visit to Korea in 2017.

Yoon, who had headed the Korean Council since 2008 and resigned in March 2020 to enter politics, made a comment that cast doubt on whether Lee was in fact a former comfort woman. The Korean Council is currently undergoing police investigation.

Learn more or purchase the book: Click here for information about the book on the publisher’s website.