[BOOK REVIEW] 'Bully of Asia': Are Japan, the U.S. Ready to Stand Up to China? 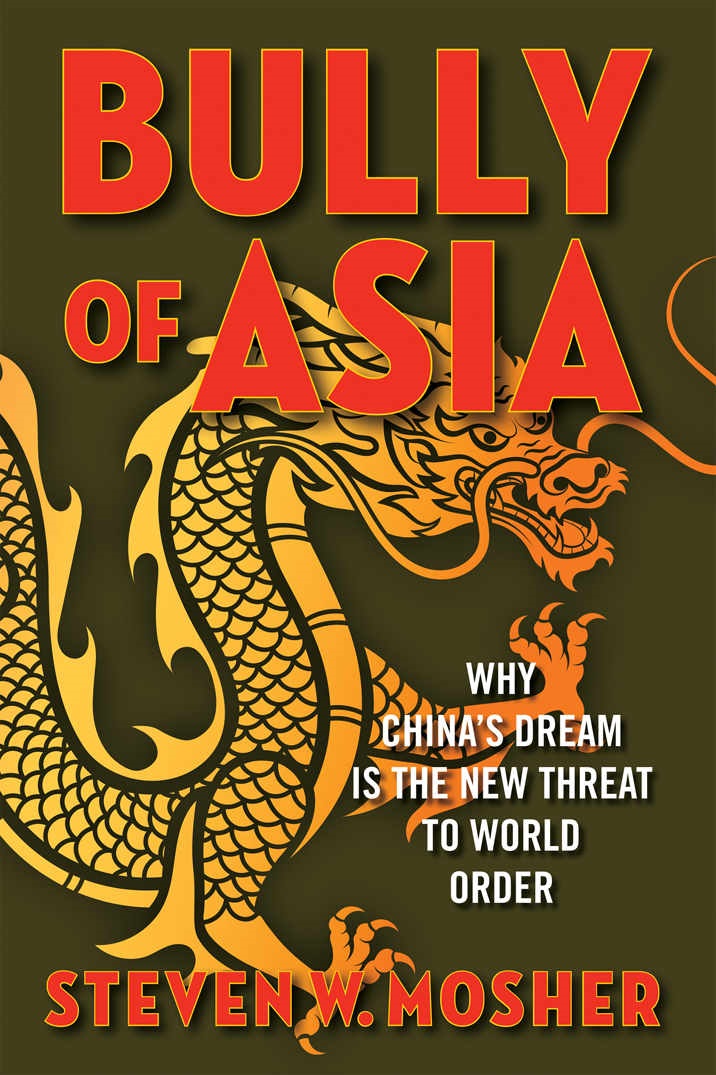 Ba. It’s a Chinese word. It means “hegemony,” the dominion that one state holds over other states. For veteran China watcher Steven W. Mosher, it’s the key to understanding Chinese history, China’s current rise into the upper ranks of world powers, and China’s ultimate ambition to be not just a, but the superpower, exercising ba, hegemony, over all other polities.

In his latest book, Bully of Asia: Why China’s Dream is the New Threat to World Order (Regnery Publishing November 2017), Mosher brilliantly tracks ba through the Chinese millennia, showing how different Chinese assumptions about statecraft and diplomacy are from those in the rest of Asia or the West. Mosher’s analysis starts on page one of the introduction, which he titles, “The Grand Unification: China’s Zero-Sum View of the World.”

Using Thucydides’ account of the Peloponnesian War as a foil, Mosher shows how Chinese leaders have been on a quest for total domination of All Under Heaven since the brutal reign of the first Qin emperor, Qin Shihuangdi.

For Mosher, the precedent that Qin set in 221 BC was reaffirmed by Chairman Mao Zedong in the 20th century: autocracy and ruthlessness, totalitarianism and unbridled megalomania on the part of whoever got to sit on the emperor’s throne.

Mosher’s use of an apothegm from Thucydides to open Bully of Asia has at least as much to do with 2018 as it does with the ancient clash between Athens and Sparta. The Thucydides Trap is a much-touted theory of international relations first introduced by Harvard political scientist Graham Allison. The Thucydides Trap describes the fear that established states experience when smaller states grow into powerful potential rivals.

When United States President Donald Trump met with Chinese President Xi Jinping in April 2017, a full-page advertisement ran in the New York Times imploring both China and America to avoid the Thucydides Trap. This was an admonishment to the U.S. to avoid outright conflict with the Asian giant that justifies its China’s economic and military power projection under the rubric of “peaceful rise.”

Mosher has a much more sober view of Chinese ambitions, however. As a young researcher in China, he witnessed firsthand the barbarity of forced abortions, forced sterilizations, and forced family separations as part of the Chinese Communist Party’s One-Child Policy. Mosher realized that the Chinese state would stop at nothing—including killing its own people en masse—in order to achieve hegemony both domestically and abroad.

Accordingly, Mosher adopts a highly skeptical view of Xi Jinping. Far from being a peaceful political leader guiding his country up a gentle slope of sustainable expansion and development, President Xi, for Mosher, is a virtual reincarnation of the Qin Emperor and a facsimile of Mao.

Following Liu Xiaobo—the Chinese dissident who criticized the PRC’s “bellicose nationalism” and who was imprisoned by the Chinese government for his critique and denied medical care for his cancer until he died of the disease—Mosher sees Xi Jinping as the new Great Helmsman, cowing other party members to study the “mass line” and insisting that socialist propaganda be incorporated into education, literature, art, film, and every other aspect of Chinese life.

Mosher calls it the “Great Han Chauvinism.” In his book, he lays out in chilling detail how “Big Daddy Xi” eliminated his rivals, purged his critics, shored up his power base, and steamrolled over institutional bulwarks in order to re-imperialize the Chinese capital.

President Xi calls all of this his “China Dream.” Most of the rest of the world calls it a nightmare.

The People’s Republic of China has knowingly sent tons of poison in the form of fentanyl and other dangerous opioids to the United States. It has allowed fishing boats to swarm and even ram Japanese Coast Guard vessels. It continues to commit mass genocide in Tibet and Xinjiang, and has essentially completed its genocide in Inner Mongolia. China has hijacked islands belonging to Indonesia, Vietnam, the Philippines, and other countries, threatened the nation of Taiwan with imminent destruction, and created and fortified artificial islands in the middle of vital shipping lanes. It is now luring small states like Vanuatu and Sri Lanka into debt traps as part of the insidious Belt Road Initiative, China’s strategy for encircling Eurasia, and choking off access to markets beyond China’s reach.

Who Will Stand Up to the Bully?

In Bully of Asia, Steven Mosher shows how this all fits together. Just as important, he explains how such behavior has been a hallmark of the Chinese state since the beginning of the dynastic period.

Japan has long been warning that China’s rise will not be peaceful. Japan’s neighbors are crying out for relief from the Chinese attempt to reassert ba—hegemony—over Asia, the Western Pacific, and beyond.

The United States, too, is now alert to the true intentions of the militantly atheistic Communist Party in Beijing. And the Chinese people, those under daily oppression by their government, are beginning to speak out as they did at Tiananmen in 1989 and in Hong Kong in 2016, most recently in the form of a massive nationwide trucker strike that threw the CCP into a panic.

It is clear: China is the bully of Asia. This is why Steven Mosher ends his splendid new volume by arguing that America must not retreat, and by listing specific steps that America can take to counter China’s rise. According to Mosher, these include the very important step of establishing full diplomatic relations with Taiwan.

I would add one important item to this list: the United States must go all-in on its alliance with Japan. The only way to stop a bully is to stand up to him. Sooner or later, it will fall to Japan and America to do just that.

Bully of Asia: Why China’s Dream is the New Threat to World Order (English Edition)