BOOK REVIEW | ‘Hidden Hand: Exposing How the Chinese Communist Party Is Reshaping the World’ by Hamilton and Ohlberg 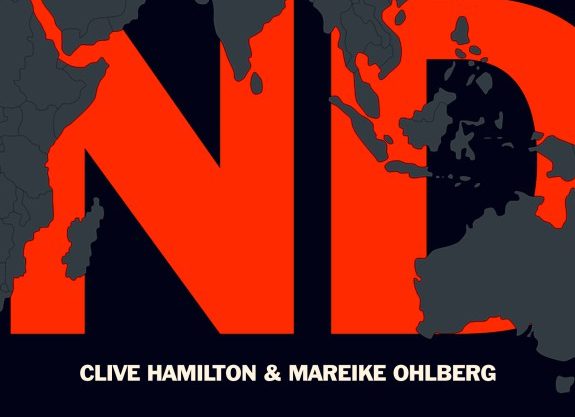 The new prime minister of Japan, Yoshihide Suga, takes office at a time of extraordinary geopolitical change. Although Suga has reiterated his incoming administration’s commitment to Japan’s alliance with the United States, the People’s Republic of China is actively undermining the very foundations of the Japan-U.S. partnership.

In Hidden Hand: Exposing How the Chinese Communist Party Is Reshaping the World, veteran watchers of the People’s Republic of China (PRC) Clive Hamilton and Mereike Ohlberg detail the methods by which the central government of the communist behemoth is systematically dismantling the postwar world order and substituting in its place a new one, controlled by Beijing.

The new Chinese order is predicated not upon free trade and democratic ideals, as the U.S.-Japan alliance is, but upon authoritarianism, coercion, intimidation, and the violent suppression of dissent.

China’s ambitions are global, and no nation on earth will be exempt from Chinese president Xi Jinping’s “China Dream” vision for a planet under the indirect or direct control of the Chinese Communist Party.

This control can already be felt in many areas of life outside of the PRC. To give just one example, when Hamilton, a professor of public ethics at Charles Sturt University in Australia, attempted to publish Silent Invasion, an earlier book on China’s strong-arm tactics in the West, the prospective publisher, Allen & Unwin, abruptly cancelled publication.

As ABC News in Australia reports, Hamilton related that “Allen & Unwin said that they were worried about retaliation from Beijing.”

In other words, the Chinese Communist Party was able to interfere in a private publishing contract in a country outside of China and forestall the publication of a book by an Australian public intellectual.

How does Beijing manage to throw its weight around on the world stage? The answers can be found in Hidden Hand, a chilling expose of the myriad of ways in which the PRC censors and shapes public expressions and even private exchanges around the world.

One of the key tactics Beijing deploys in its drive to supplant the United States and force a new world order into existence is “elite capture”.

The way Beijing “looks at the world,” Hamilton and Ohlberg write, is to “study centers of power in each country, determine who the elites are in business, politics, academia, think tanks, media, and cultural institutions,” and then collect information on connections. (28)

From there, Beijing targets elites with flattery, inviting academics or politicians to give speeches in China or journalists to take junket tours of the Great Wall or the sights of Shenzhen and Shanghai.

China also targets the families of politicians, keeping, for example, Democratic American politician Joe Biden in check by “elite capturing” his son, Hunter Biden, through infusions of capital into Biden-linked firms from the CCP-controlled Bank of China. (35-36) Joe Biden himself, Hamilton and Ohlberg report, has a “warm personal relationship with Xi Jinping” going back to the time when Xi was a rising star in the CCP establishment. (35)

The same thing takes place worldwide, Hamilton and Ohlberg assert, in Europe, Africa, and throughout Asia and the Global South. Australia is particularly heavily infiltrated.

When a government or a reporter or a professor or institute director takes a soft line towards Beijing, Hamilton and Ohlberg argue, there is a good chance that they have been influenced by the “elite capture” stratagem which the PRC has been deploying systematically for decades.

Another major artery for Beijing’s rapidly-extending worldwide influence operations is the One Belt, One Road project (OBOR, also known as the Belt-Road Initiative (BRI)). The nuts and bolts of this “new Silk Road,” as Xi Jinping terms it, is to use debt traps to take control of facilities such as shipping hubs, highways, and airports which the PRC builds on margin for mainly poor host countries such as Laos and Pakistan.

These massive, environmentally destructive projects also provide outlets for the Chinese construction industry, which would be idle and therefore potentially dangerous, as China’s domestic economy cools.

Once a debt-entrapment project is complete, the OBOR facilitates meddling in local politics.

Ohlberg, a  senior fellow in the Asia Program of the German Marshall Fund, has added a strong component of research to Hidden Hand, especially on PRC maneuvering outside of the Anglosphere. Her reporting on the OBOR in Europe is invaluable.

CCP Target: Professors of the World

Perhaps no global venue is riper, one might even say more eager, for Chinese interference than universities.

In recent months, the FBI in the United States has arrested a string of professors at American universities attempting to flee to China with sensitive research information or suspected of accepting large cash bribes in exchange for doing the PRC’s bidding.

Beyond this, espionage units in the Chinese government oversee a vast network of spying and influence-peddling in universities in virtually every major country in the world. Confucius Institutes are just one piece of this puzzle. By means of varying degrees of subtlety, from invitations to lavish banquets to “honey-trap” operations, Beijing ensures that academics worldwide conform to the party line. Socialist-leaning professors are only too happy to comply.

Hamilton and Ohlberg provide examples from universities in Australia, the United States, and elsewhere in the West of Chinese students and diplomats pressuring administrators to cancel talks on topics Beijing finds discomfiting. The “three T’s” are the main sources of worry for Beijing, Hamilton and Ohlberg argue: “Taiwan, Tibet, and Tiananmen”.

For example, professors at universities which host the Dalai Lama can expect never to receive a visa to enter China again, Hamilton and Ohlberg write, thus jeopardizing careers and producing a chilling effect on free speech elsewhere. (161-162, 182-183)

Pushing Taiwan Off the International Stage

The main target of Beijing’s overseas propaganda appears to be Taiwan, which Beijing wants to “push off the international stage,” Hamilton and Ohlberg write.

The World Health Organization (WHO) under Tedros Adhanom Ghebreyesus—who facilitated billions of dollars of OBOR indebtedness in his native Ethiopia—excluded Taiwan from meetings during the covid-19 outbreak. (253-254) The WHO also shuns Taiwan’s Red Cross Society. (254)

Meanwhile, Beijing prevents journalists working for Taiwanese news outlets from covering World Health Assembly events, even though those events are held not in China but in Geneva, Switzerland. (254) These anti-Taiwanese bullying tactics are repeated in every institution where Beijing has gained influence.

Bringing Japan Inside the Nine-Dash Line

While there is little mention of Japan in Hidden Hand, it is certain that Beijing is deploying its tactics here, too. As a close American ally de facto member of the Five Eyes intelligence-sharing group, Japan has long been a priority for Beijing’s subversion efforts.

For instance, while the PRC openly tries to wrest control of the Senkaku Islands from Japan, it has been using its influence at the UN to weaponize the UNESCO “Memory of the World” scheme into an anti-Japan propaganda exercise.

Also, the “first island chain” doctrine of the Chinese military sees Japan as the keystone of a PRC-dominated zone from which all American military influence has been cleared. As a matter of fundamental national strategy, the People’s Republic of China is systematically working towards the destruction of the U.S.-Japan alliance.

Clive Hamilton and Mareike Ohlberg’s Hidden Hand is a tour-de-force of investigative writing. It is also a moral triumph. Resisting the blandishments of money and power which flow to those willing to cooperate with Beijing’s drive for global domination, Hamilton and Ohlberg have told the truth about what the PRC is really doing.

Title: Hidden Hand: Exposing How the Chinese Communist Party Is Reshaping the World

For More Information: Visit the publisher’s website, at this link.

To purchase the book: Book sellers carrying the book are linked at the publisher’s website, here, including Amazon UK and Waterstones.  Digital versions, hardback and paperback sales are also available on Amazon U.S., here.