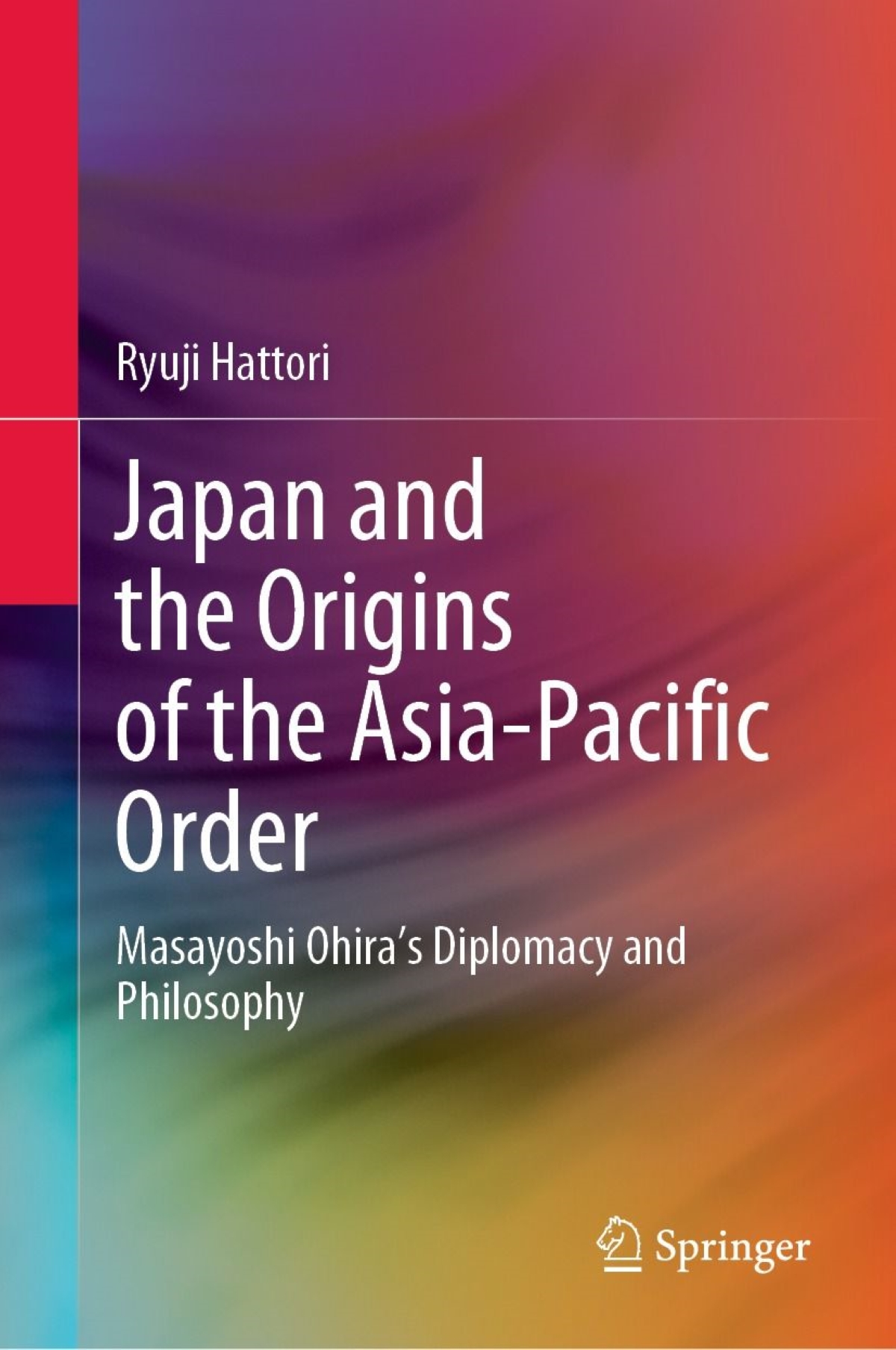 Book cover: 'Japan and the Origins of the Asia-Pacific Order: Masayoshi Ohira’s Diplomacy and Philosophy' by Ryuji Hattori, translated by Graham B Leonard.

Like myself, many of those who avidly read JAPAN Forward have still found it difficult to accept the tragic news of the assassination of former Prime Minister and Liberal Democratic Party (LDP) Party President Shinzō Abe in the last days of the 26th House of Councillors (Upper House) election in Japan.

Ironically, the book I had planned to review and will do so here is also about an LDP Party president who died in the middle of the first ever joint election for the Upper and Lower Houses in June 1980. In the case of this earlier leader, his death was due to exhaustion and the effects of a heart attack.

I had received a copy of Ryuji Hattori’s Japan and the Origins of the Asia-Pacific Order: Masayoshi Ohira’s Diplomacy and Philosophy (Singapore: Springer, 2022) earlier in 2022 and had finished it a few days before Abe’s passing. A friend and former parliamentarian I was with when we learned of the shooting told me, “A real politician leaves his home not knowing if it will be his last time.”

This is the way Abe lived his life, and the way Masayoshi Ōhira, the subject of this book, seems to have as well.

Ōhira was born and raised in a small farming village in Kagawa Prefecture, on the island of Shikoku, facing the Seto Inland Sea in 1910. He was the 6th of 8 children. Aided by an aunt living in Takamatsu City after his father died, Masayoshi attended high school there and encountered both Western foods and Christianity. He became an avid reader. Ōhira even considered “becom[ing] a pastor and dedicate[ing his] life to evangelism” (p. 3).

The author of the book and one of Japan’s leading political and diplomatic historians, Ryūji Hattori, introduces at this juncture the observations of the late United States Ambassador to Japan Edwin O. Reischauer, who worked closely with Ōhira when he was foreign minister. Reischauer, who was born in Japan seven months after Ōhira, and the son of missionaries, wrote: “Perhaps it was this Christian background that gave Ōhira the character and norms of a statesman rather than those of a mere politician…He was able to guide others while seeming to follow them. This is because he had a vision for the future” (p. 4).

Throughout the book, Hattori is able to bring out the essence of the main character due not only to his being well read in half-a-dozen languages and published in the field, but also because he has spent decades interviewing officials — those both central and tangential to the story — involved in the policymaking process.

As such, the book that has emerged is both a political biography as well as a deep look into the thinking behind Ōhira’s foreign policy.

After high school, Ōhira went to Tokyo University of Commerce — the predecessor of Hitotsubashi University — and joined the Ministry of Finance at the strong urging of then-Vice Minister Juichi Tsushima, a native of Kagawa Prefecture. A month after he submitted his graduation thesis, Finance Minister Korekiyo Takahashi was killed in a failed coup against the government in February 1936. Chapter 1, “Distant Memories,” ends with Tsushima resigning at the time as well, but Ōhira continuing with his plans to join the ministry that spring.

Chapter 2, entitled “The ‘Philosophy of the Ellipse’,” begins with Ōhira’s commencement of work in the Ministry of Finance. Among his assignments was one working in Hebei Province, China, for the East Asia Development Board. Subsequently, he worked for Finance Minister Tsushima and began to interact with some of the bureaucrat-politicians who would lead Japan’s postwar recovery.

In his chapter on “Transition to the World of Politics,” Ōhira’s evolution is introduced from a finance ministry bureaucrat to a politician in the final years of the Shigeru Yoshida administration. It was Hayato Ikeda, a disciple of Yoshida, who was most responsible for bringing Ōhira into politics.

Ōhira joined the Yoshida faction. Then he followed Ikeda when the latter formed his own faction, Kōchikai, in June 1957 after Yoshida had retired from politics. Ōhira would hold key positions in the newly recreated Liberal Democratic Party and serve as Chief Cabinet Secretary during the first part of the Ikeda administration, established in July 1960.

Hattori spends much time on the relationship between Ōhira and Kakuei Tanaka, another member of the Yoshida group. Indeed, the two men would support each other throughout the remainder of their political careers. Tanaka belonged to another faction — the Eisaku Satō group — but Ōhira and Tanaka worked very much in sync, often confiding in one another. They could do this because they were different and recognized each other’s skill sets. Tanaka, the master of speech-giving, even tried to help Ōhira with his oration abilities. Due to his extensive research and interviews, Hattori is able to skillfully bring out these interpersonal dynamics, which had an enormous impact on Japanese politics.


Emergence of a Diplomatic Style

Chapter 4, entitled “The Beginnings of Ohira Diplomacy,” discusses Ōhira’s efforts at diplomacy. He placed particular emphasis on Japan’s relationship with the United States, inheriting the view from Yoshida and Ikeda.

However, he has also worked closely with GHQ officials during the occupation of Japan, and saw firsthand the energy with which the United States helped save the occupied country from starvation and rebuild it afterwards (p. 32). Hattori describes Ōhira regularly visiting Yoshida in retirement in Ōiso, no doubt to learn from the great statesman who placed the United States at the center of Japan’s postwar foreign policy.

Ōhira also met regularly with Reischauer, who had become President John F. Kennedy’s ambassador to Japan by this point. Numerous bilateral dialogues were started with the United States during the Ikeda-Kennedy administration. Much progress in the relationship was seen during this time, including very frank discussions on the handling of nuclear weapons on United States naval vessels.

Advances were also made in the normalization of relations with South Korea, including working out a significant economic cooperation package. Ōhira did so because he recognized that Japan and South Korea were “permanent neighbors” and thus Japan should help “move [South Korea] into the future” (pp. 30-31). Ōhira was aided in securing approval of the economic package by Tanaka, who had become Finance Minister, and whose ministry was resisting.

Ōhira succeeded Ikeda as faction head upon the latter’s death in the summer of 1965. This history is related in Chapter 5,“The ‘Total Settlement of the Postwar Era’.”

Ikeda had stepped down as prime minister due to the discovery of throat cancer around the time of the start of the 1964 Tokyo Olympics. Nevertheless, he was instrumental, along with Tanaka, in getting Sato, a former member of the Yoshida group and rival of Ikeda, chosen party president to succeed Ikeda.

Sato, wary of potential rivals, liked to play people off of one another and kept Ōhira at a distance for much of his nearly 8 year administration. This probably hurt Satō in the end more than Ōhira. Nevertheless, Ōhira did receive some party and cabinet positions during that time, but the lack of closeness with Satō prevented true cooperation.

“To add insult to injury,” Hattori writes, “Sato appointed Kiichi Miyazawa, a more junior member of the Kōchikai, to succeed [Ōhira] as [Ministry of International Trade and Industry] minister” (p. 60). One member of the faction at the time, who later became prime minister himself, said “Ohira’s resentment and rage are still etched in my mind. Things were never good between Miyazawa and Ohira after that” (p. 61). Politics can be bruising and brutal.


Normalization of Relations With China

Chapter 6, “Chasing the Horizons of Diplomacy,” discusses Ōhira’s return to the center of power in the Kakuei Tanaka cabinet, which came into being in July 1972. The main focus of the administration was the normalization of relations between Japan and the People’s Republic of China, which Tanaka had promised to do.

Tanaka “left diplomacy entirely in Ōhira’s hands” (p. 71). Fortunately, Ōhira understood that normalization had to be done “in a manner compatible with stable US-Japan relations” (p. 72).

Whereas the United States announced the recognition of China on short notice without consulting its main ally, Japan was constantly aware of America. What’s more, Ohira, according to Hattori, “rejected the idea that a dichotomy existed between alignment with the United States and pursuing improved diplomatic relations with Asia” (p. 72).

Objectively speaking, it would not be difficult to call this a delicate balancing act. However, Ōhira firmly believed in the importance of cooperation with the West. So for him it was perhaps a move that strengthened that cornerstone.

We see this in later chapters, including when Ōhira was serving as prime minister (1978-1980). He would add Australia into his vision for regional cooperation. The discussion (Chapter 8, “Seeking a New Order Along the Pacific Rim”) is as relevant today as it was forty years ago.

Australia is a vital partner to Japan, and to the United States. Ōhira’s wisdom in looking to Australia then is praiseworthy.

Ōhira, according to Hattori, was “the first prime minister to make regional cooperation an explicit policy objective, a centerpiece of his foreign policy” (p. 114). As prime minister, he pursued the Pacific Basin Cooperation Concept, a “call for open regionalism, for cultural, economic, and technological cooperation on a grand geographic scale” (ibid.) The concept was recommended by one of nine study groups he created upon assuming office. The chairman of that particular study group became foreign minister in the Ōhira administration, Dr Saburo Okita.

Despite this push for greater involvement in the Pacific Rim, Ōhira “understood the importance of Japan demonstrating that it belonged to the Western Bloc” (p. 118). Ōhira unfortunately died just as the Western bloc was being tested by the Soviet Union and the new Cold War. His steadying hand was certainly needed for a couple of more years as his successor, Zenkō Suzuki, was nowhere near up to the task.

Today, the current leader of Kōchikai, Kishida Fumio, serves as Prime Minister and is being pulled in many directions by domestic and external forces. He would do well to learn more about Ōhira’s diplomatic philosophy and recommit to the US-Japan-Australia relationship.

There are other nuggets of wisdom throughout the book as well. Chapter 7, “Internal and External Crises,” discusses in particular the domestic political upheaval that defined the 1970s. Five prime ministers were produced over that short, chaotic span of time.

We will see a return to factional rivalries almost on that scale for the first time in a long time in the coming weeks and months. It will be good to dust off our books on Japanese politics and political history.

Hattori’s book, skillfully translated by the United States-based Dr Graham B Leonard, with whom this author has worked, should be at the top of the reading stack.

Title: Japan and the Origins of the Asia-Pacific Order: Masayoshi Ohira’s Diplomacy and Philosophy (Singapore: Springer

Translated by: Graham B Leonard

To learn more or to purchase the book, see the Publisher’s Website, here.

Eldridge is a former associate professor of Japanese political and diplomatic history, Osaka University, and the translator of numerous books, including Watanabe Tsuneo, Japan’s Backroom Politics: Factions in a Multiparty Age (Lexington, 2013). Find his essays and reports on JAPAN Forward, here.