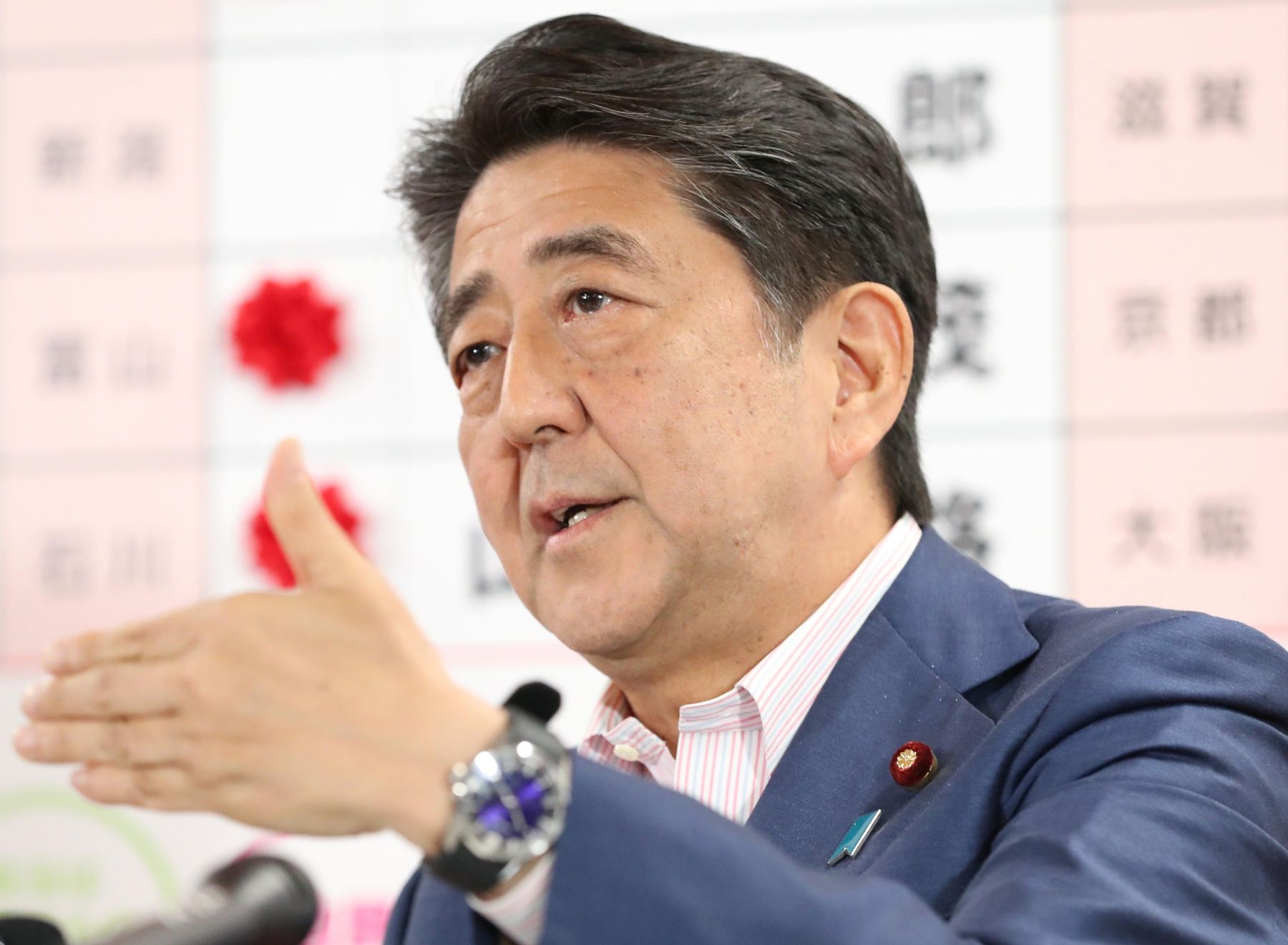 Japan PM Shinzo Abe after the Victory at the Upper House Election in July 2019.

Statesmen come along only once in a great while. Former Japanese Prime Minister Shinzo Abe who was murdered on July 8 in Nara, Japan was a statesman.

He was the first of the 20-odd Japanese prime ministers to deserve the title in the last 35 years since Yasuhiro Nakasone held office.

Even though he had stepped down in 2020, he was still playing an important role pushing to build Japan’s defenses, strengthen the United States-Japan Alliance, support Taiwan, and take on the looming threat from Communist China.

He will be sorely missed.

Abe had a strategic vision of Japan’s role in the world. He recognized that Japan could no longer sit quietly, writing the occasional check, while events unfolded around it.

Foremost, he saw that close ties with the United States are indispensable for Japan – and that forging a strong Japan-US relationship required Tokyo to become a more useful ally. And by playing an active regional and global role – including militarily – Japan could raise its stature – and its influence.

To this end, Abe traveled the world. Being seen and heard made a difference, and contrasted starkly with the low international profile of most previous Japanese prime ministers.

Abe also directed the Japan Self-Defense Forces to expand military-to-military engagements, exercises and talks throughout the Asia-Pacific region, and even in Europe. This was unthinkable just a few years earlier.

He also tried to sell Japanese submarines to Australia. This would have upended the regional strategic order – in a good way – had Australia’s Turnbull administration not lost its nerve and canceled what was reportedly a done deal.

The Australians instead went with a French bidder and a few years later the deal was terminated as an embarrassing, expensive failure.

Although China predictably complains, Japan’s military outreach is even now well-received in the region, with Australia, Vietnam, India, the Philippines, Pacific Island nations and others welcoming Japanese security cooperation.

And were it not for Mr Abe, there would be no QUAD – the loose security alliance between the US, Japan, Australia, and India.

It should be remembered that Abe was not the first prime minister to start this move to a more active defense and assertive foreign policy. But he moved things much faster and farther than anyone since Prime Minister Yasuhiro Nakasone in the mid-1980s.

The United States had long wanted Japan to be a more active ally and to play a more substantial defense role – both in its own right and in league with US forces.  Unfortunately, the US government wasted a year after Abe’s election in 2012, keeping him at arm’s length for his views of history, comfort women and his reputation as a “rightist.”

However, the Americans finally got over this and got what they wanted (and needed) – as evidenced by the 2015 revision ー and improvement ー of the US-Japan defense guidelines. At the same time, Abe was successful in securing passage of measures broadening what Japan can do under the doctrine of “collective self-defense.”  These were no small feats.

As for resolving the Okinawa military base issues, Abe made an effort to look at Japan’s defense from a national perspective, rather than the narrow viewpoint of Okinawan activists and outsider-incited opposition.

He nobly tried to finally push through the replacement for the Marine Corps’ Futenma Air Station after repeated promises by Tokyo to do so went unfulfilled.

He even bit his tongue and patiently tried building a relationship with South Korea.


Explaining His Vision Against Challenging Winds

Abe did not snap his fingers and get what he wanted. It was hard work. He always faced considerable domestic opposition.

Moreover, he couldn’t ignore public opinion. Consequently, Abe endeavored to explain his policies, even if imperfectly, better than most (if not all) of his predecessors.

Besides challenges from opposition parties, Abe had plenty of enemies within the ruling Liberal Democratic Party.  There was even a sizable LDP bloc opposing Abe’s active defense policies, not to mention many politicians of all parties favoring a more accommodating stance towards China.

Abe also faced immense personal animus from many people, both Japanese and foreign. In some respects, his recent murder was the predictable outcome of this unseemly hatred from people who should have known better.

Of course, Japan’s bureaucracy dragged its feet as often as not. Indeed, for all his success, Prime Minister Abe was unable to meaningfully increase defense spending given the Ministry of Finance’s outsized influence. But he did reverse a decade of declining defense budgets and managed at least modest increases each year.

And it wasn’t just defense where Abe did well. He kept the Trans-Pacific Partnership (TPP) alive after the Americans declined to join. Thus he maintained a free world version of a regional economic alliance – until one day when the United States might come to its senses.

Abe was a veritable Otto von Bismarck compared with many of his predecessors – who seemed to view a Japanese prime minister’s primary purpose as recycling money from the central government to favored supporters and back again.

For them, foreign affairs and military matters were better left to risk-averse bureaucrats.

A separate word about the economy:  Abe is still – even after his death – savaged by critics – especially foreign ones – for the perceived failure of Abenomics. However, Abe deserves a pass on this, not least since none of his predecessors over the last 25 years had any greater success reviving the economy.

Indeed, one might fairly argue that Abe’s biggest mistake was failing to listen closely to the Ministry of Finance and the Bank of Japan – and then doing the exact opposite of what the bureaucrats recommend.

This writer has followed and written about Abe for a number of years. And I was wrong about one big thing. I thought that once Abe stepped down as prime minister, the momentum he created – particularly on defense and foreign policy – would lapse.

Japan would then, I wrongly surmised, return to the custom of short-lived, ineffective prime ministers, and a defense and foreign policy based on doing as little as possible.

It did not. Indeed, Abe’s successors are continuing on the course that the senior statesman set out for Japan. For example, Prime Minister Kishida has recently spoken of doubling the defense budget and “fundamentally strengthening” Japan’s defense.

And thanks to his openness, the China threat (and others) is now almost common wisdom among the Japanese citizenry and much of the political class.

The world needs an assertive, active Japan, representing as the country does, a higher manifestation of individual liberty, consensual government and rule of law.

And the world needs the proactive, engaged, militarily capable nation that Abe tried to create.

Japan is fortunate to have had him, and so are the Americans and other free nations.

Say what one will, Shinzo Abe left Japan better than he found it.