BOOK REVIEW | ‘The Iconoclast: Shinzō Abe and the New Japan’ by Tobias Harris

BOOK REVIEW | Kingdom of the Sick: A History of Leprosy and Japan, by Susan L. Burns 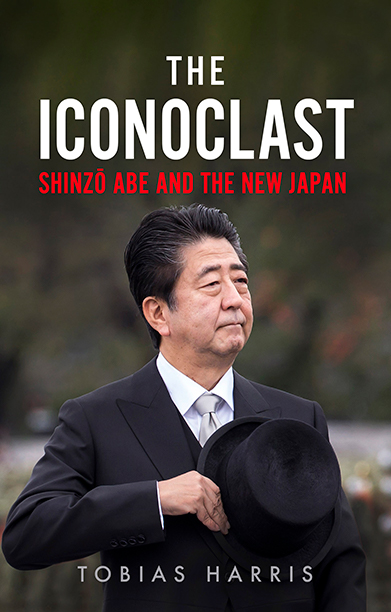 After entering politics reluctantly on his father’s insistence, Shinzō Abe was groomed for success by top politicians in the Liberal Democratic Party (LDP) — for example, being nominated to a high-profile role in former prime minister Junichiro Koizumi’s negotiations with Pyongyang over North Korea’s abduction-terrorism campaign against Japan.

Shinzō Abe was a rising star of the LDP, and when he assumed the prime ministership himself in September 2006, it seemed the natural culmination of a politically very well-connected life.

But then things fell apart. Political scandals and disastrous election losses for the LDP on Abe’s watch cut short his burgeoning career. Abe’s health worsened, too. When he resigned in September of 2007, just shy of one year after taking the top political position in Japan, to many Abe’s career seemed to be finished. The golden boy had crashed and burned.

Tobias S. Harris’s new book, The Iconoclast, is the story of Shinzō Abe’s political life. Why “iconoclast”? Because Abe has done what almost no one thought politically possible in Japan. For one thing, Abe came back from the LDP graveyard and fought his way to the prime minister’s office for a second time, winning the post again in 2012.

Not only that. Abe accomplished his remarkable comeback by defying much of the political wisdom of the pundits who covered Japanese politics and the time-servers who populated so much of the political ranks. Shinzō Abe is an iconoclast because he has dared to build his career on that most forbidden of platforms in postwar Japan: patriotism.

The Tenure of a Patriot

When Abe retired for the second time in September of 2020, again due in part to scandals and health, he was the longest-serving prime minister in Japanese history, with nearly nine years in total in the highest political office. Abe did not spend those nine years nursing the status quo, but attacking it head-on.

Harris returns frequently in The Iconoclast to Abe’s 2006 book Utsukushii kuni e (Toward a Beautiful Country, Bungeishunju publishers, 2006), in which Abe charts the patriotic, Japan-positive vision which he used to leverage his attempts to upend business as usual in Japanese politics.

Much of Abe’s vision of a “beautiful country” reposes in Abe’s understanding of Japan as having a history which Japanese people should be proud of. Bucking every trend in both Tokyo and Washington, Prime Minister Abe time and again refused to buy into the safe, but intellectually dishonest, masochistic view of modern Japan as trying to outrun a dark and aggressive past. Instead, Abe embraced Japan’s history — for example visiting Yasukuni Shrine to honor the war dead and refusing to play along with the usual attempts by South Korea and the People’s Republic of China to weaponize history for political and financial gain.

Fighting against these headwinds, Abe sought to reform the Japanese constitution to recognize the existence of Japan’s de facto military, the Self-Defense Forces. (Abe retired before he could see this work brought to fruition.)

He also worked to expand Japan’s diplomatic profile, traveling almost without stop and building up Japan’s alliances with nations concerned about the rise of communist China — such as across the “Quad,” with the iconoclastic-maverick American president Donald J. Trump, and throughout the Free and Open Indo-Pacific.

Abe also tried, but failed, to negotiate with Russian President Vladimir Putin to return to Japan the Northern Territories, which were stolen by the Soviet Union in the waning days of World War II.

In other words, from Yasukuni to historical issues, Russia to China, Abe grabbed with both hands every third rail in Japanese politics. This, paradoxically, seems to have been the secret to Abe’s political longevity and policy success.

More of an Iconoclast than Harris Realizes

Harris acknowledges Abe’s iconoclasm in the title of his book, of course, and throughout this detailed, virtually week-by-week account of Abe’s political career. “The Slow Boring of Hard Boards,” Harris titles one of his chapters, drawing from Abe’s account of how he was going about breaking through the bureaucratic resistance to his initiatives and the historical-masochistic inertia of the LDP and of Japanese politics as a whole.

After Abe’s triumph in the “gamble” of the 2014 snap election, Harris writes, Abe found “vindication that his approach could work.”

Abe would “wield power by grinding away at problems,” Harris writes, “patiently deploying his assets, strategically distributing his posts and co-opting rivals, knowing when to forge ahead despite opposition and when to back down, and always being willing to compromise.

“He would win by being inexorable,” Harris concludes.

But Harris, while giving credit to Abe for his dedicated iconoclasm, still has a bone to pick with his subject. A few bones, in fact.

In his notes, Harris dismisses suggestions that Chinese and South Korean political activism was behind this legislative push. Harris fails to mention that Mike Honda traveled to Korea to engage in comfort women activism with Russell Lowe, the PRC spy who, for nearly 20 years, infiltrated the offices of Sen. Dianne Feinstein. After the Federal Bureau of Investigation alerted Senator Feinstein to Lowe’s espionage work for the Chinese Communist Party, Lowe left Feinstein’s employ and went to work directly for an organization tasked with bringing comfort women statues to the United States.

Harris also fails to remark that some comfort women activists in South Korea have spent time in prison as North Korean agents. Mike Honda’s theatrics in Congress and the politicking of his supporters in the Beltway is not the final word on this contentious subject.

To Harris’ credit, in a lengthy footnote following his introduction of the Honda resolution, Harris attempts to modulate the stance of the anti-Japan crusaders in Washington (many of them illiterate in Japanese) whose talking points he repeats in his main text. Unfortunately, Harris still fails to drill past the prejudiced rhetoric to get down to historical bedrock.

The biggest failing of the Harris book is just this, that the author works almost exclusively in the ephemera of newspaper articles, popular press books, think-tank working papers, and political reports. To get to the heart of Abe’s iconoclasm, one will have to do better than wading in the shallows with Mike Honda and his Washington enablers.

Had Harris attempted to understand the history of Japan’s wartime past without applying the easy filter of the DC-Tokyo establishment line, he might have been better able to explain to his readers just how much of an iconoclast Shinzō Abe really is. To give just one example, Harris’s use of “Berkeley Center for Right-Wing Studies”-affiliate Walter Skya’s 2009 book Japan’s Holy War (Duke University) as a source on prewar radical Kita Ikki does not speak well for Harris’s ability to cut through typical American prejudices against Japan.

There are other problems with the Harris volume besides the thinness of historical knowledge beyond the usual journalistic tropes.

One problem, for example, is Harris’s inconsistent use of journalistic pieces themselves. Harris is particularly conflicted about the Sankei Shimbun. In a note to page 133, for instance, Harris cites Sankei columnist Rui Abiru as a “right-wing intellectual,” but then uses the same label, “right-wing,” to refer to “manga artist and provocateur Yoshinori Kobayashi” just a couple of pages later. There is a universe of difference between Kobayashi and Abiru. Calling them both “right-wing” does little for Harris’s readers besides revealing his own prejudices.

On page 147, however, the Sankei Shimbun is described as “conservative,” and the same Rui Abiru is this time quoted straight, with no labels. Ditto for page 151, where the “right-wing” Abiru is again quoted with no qualifier. Why slander a source you rely on so often?

Harris is to be thanked for including even these few voices outside the white-Washington-liberal-approved mainstream, but the way they are presented — as extremists who must be kept at arm’s length with labels and rhetoric — shows that Harris, and the American establishment at large, still have a long way to go before they see just what Abe the iconoclast had to fight against to bring his patriotic vision to bear on postwar Japan.

Despite its flaws, The Iconoclast is a very helpful overview of Abe the politician and reformer, grounded in Harris’s years of experience studying Japanese politics, some of it from inside the halls of power.

Harris was an assistant to Diet member Keiichirō Asao, formerly a Democratic Party of Japan member, but pulled by the Abe tide into the LDP. Harris later continued his tutelage in Japanese politics as a commentator and student, and has a rare facility to work in both English and Japanese sources. These strengths come through in most of The Iconoclast.

Harris’s book on Shinzō Abe’s political life is the first biography on Abe in English. Given the sheer volume of journalistic and policy-paper sources Harris has cited, it is unlikely that anyone will seek to write another English-language volume about Shinzō Abe anytime soon. The Iconoclast is therefore sure to enjoy an Abe-like lengthy tenure on the shelves of pundits and lay readers alike as the definitive English-language work on Japan’s most important statesman in 50 years.

Title: The Iconoclast Shinzo Abe and the New Japan

To learn more about the book: See the publisher’s website here.

To purchase the book: On the publisher’s website, here, or on the web here.