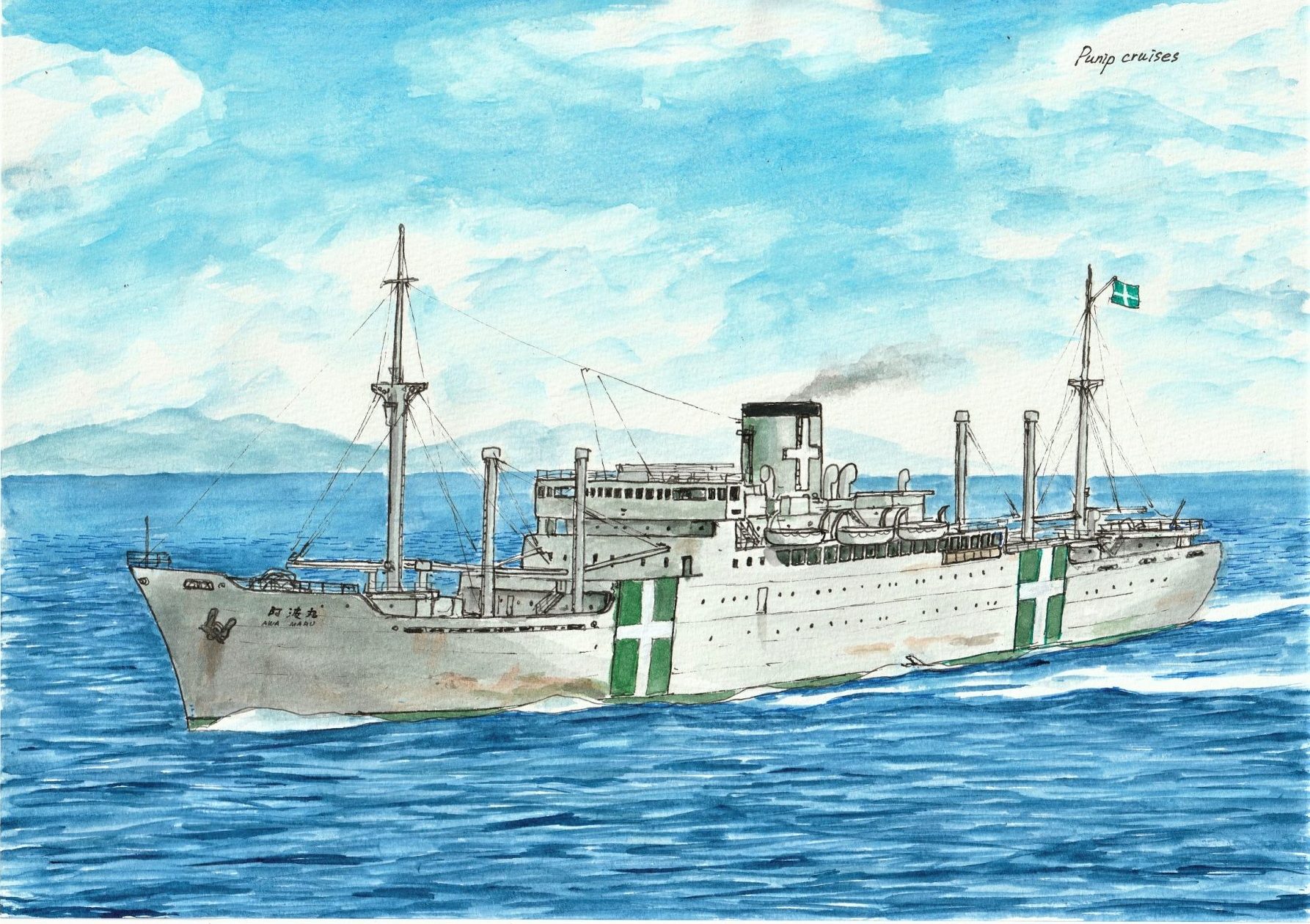 When we think of sunken passenger ships, most of us probably think first of the RMS Titanic. On April 15, 1912, the mighty RMS Titanic hit an iceberg in the North Atlantic and went down, taking some 1,500 passengers and crew to a watery grave. Some might also remember the RMS Lusitania, which was sunk by a German submarine almost exactly three years and one month later, on May 17, 1915. Nearly 1,200 people died that day.

Then there is the MS Awa Maru, about which not many outside Japan are aware. The MS Awa Maru was a Japanese passenger/cargo ship which was sunk by a U.S. submarine during WWII on its return voyage from Southeast Asia, where it had dropped off Red Cross supplies for Allied POWs. Of the 2,004 people on board the MS Awa Maru, only one survived.

The ‘Awa Maru’ and the ‘Gripsholm’ Connection

My interest in the MS Awa Maru is not strictly academic. I knew a father from Japan, Mr. Asami, and his young son Harold who were on board. Mr. Asami had been a resident of Hawaii for more than two decades before the war and was among those selected for the second hostage exchange between the U.S. and Japan in 1943.

The first exchange had taken place in Mozambique the previous year. Goa was chosen for the second exchange. Approximately 1,500 hostages from each side were exchanged on both occasions.

Mr. Asami, accompanied by his family, was transported to Goa from the U.S. on the Swedish liner MS Gripsholm. At Goa they boarded the Japanese exchange ship for the trip to Japan. At Singapore, however, the entire family disembarked along with some two hundred others instead of proceeding to Japan.

In 1945, the Asamis decided to leave Singapore for Japan due to the worsening war situation. Mr. Asami and Harold boarded the ill-fated MS Awa Maru. The rest of the family made it safely to Japan on a different vessel.

RELATED READ: Memories of the Gripsholm Exchange: Living on Both Sides in World War II

The ‘Awa Maru’ and the Ferrying of Red Cross Supplies

The Red Cross supplies in the hull of the MS Awa Maru had been transported to Siberia from Portland, Oregon, reportedly on Liberty ships crewed by Russians. In November, 1944, Japan’s MS Hakusan Maru picked up 2,200 tons of Red Cross supplies at Nakhodka, Siberia, about a hundred miles south of Vladivostok, and transported those supplies to Japan.

The other ship used to transport Red Cross supplies was the MS Awa Maru, an 11,249-ton vessel owned by Nippon Yusen Kaisha and built by Mitsubishi Shipbuilding. Upon completion in March of 1943, she was immediately requisitioned by the Japanese military and made a number of trips to Southeast Asia.

On March 28, the MS Awa Maru departed Singapore with an expected arrival in Japan on April 4. Of the 2,004 people on board, 148 were crew members.

There are various descriptions of the passengers. Some say that all were important people and skilled specialists, while others say that most of the people on board were women and children. No description mentions there having been any military personnel on board.

On the night of April 1, 1945, the MS Awa Maru was sunk in the Taiwan Strait by the submarine USS Queenfish.

With poor visibility and only a head-on view, the MS Awa Maru’s illuminated white crosses were not visible to the USS Queenfish. The submarine commander, Charles Elliott Loughlin, had read a message about safe passage for the MS Awa Maru, but had not been informed by his communications officer of earlier messages of safe passage and also did not realize that the MS Awa Maru would be coming through his area at that time. Loughlin therefore failed to identify his target.

It was a mistake, an inexcusable one, that occurred because of negligence. To his credit, Loughlin did not attempt to place the blame on his subordinates or any others.

The lone MS Awa Maru survivor was picked up by the USS Queenfish. He was Kantora Shimoda, the personal steward of the captain. Shimoda had survived the sinking of the MS Heiyo Maru in January of 1943, the MS Teiko Maru in February of 1944, and the Teia Maru (French ship Aramis) on August 14, 1944. The last, the MS Teia Maru, was the ship used by Japan during the second hostage exchange which took place in Goa in 1943.

Was the ‘Awa Maru’s’ Sinking Justified?

Many consider the sinking of the MS Awa Maru justified because she was carrying military cargo, was not a Red Cross ship or a hospital ship, and was not bound by conventions or otherwise limited as to cargo allowed on board.

At Loughlin’s court martial, the defense claimed the MS Awa Maru had forfeited the right of safe passage because she was carrying war materiel. However, the court dismissed this argument because the safe passage agreement was for the outward and inbound passages of the MS Awa Maru and contained no restrictions on permitted cargo.

Commander Loughlin was found guilty and given a Letter of Admonition, a lesser penalty than that of “Negligence”. He continued to be promoted, retiring as a Rear Admiral. Admiral Chester Nimitz, Commander of U.S. Naval Forces, Pacific, was so outraged at Loughlin’s light sentence that he gave every member of the board a Letter of Reprimand, a punishment greater than that which they had handed down to Commander Loughlin.

What Else was in the ‘Awa Maru’s’ Cargo Hold?

The MS Awa Maru’s cargo was described by Shimoda as rubber, lead, tin and sugar. The claim submitted by Japan at the time, a total of $52.5 million including indemnities for the ship and the loss of life, listed the value of the cargo at $7.25 million.

There have been various speculations that the MS Awa Maru carried tons of gold and platinum, cases of diamonds, and even the fossil of the Peking Man. According to a declassified NSA report based on analyses of Japanese communications at the time, gold had been sent on the MS Awa Maru from Japan to Singapore bound for Thailand, to defray the costs of logistical support being provided by Thailand.

No mention is made of precious metals or treasures being on board during the MS Awa Maru’s return voyage.

In the 1970s and 80s, the People’s Republic of China located the sunken Awa Maru in the Taiwan Strait and spent an estimated $100 million on salvage operations. The Chinese crew said they found nothing of value. The recovered remains of bodies and numerous artifacts were returned to Japan.

A History Deferred, a Memory Worth Recovering

After the war in appreciation for the aid and assistance provided by the U.S. to Japan following the surrender, Japan agreed to waive all claims against the U.S. arising from the sinking of the MS Awa Maru. Japan also agreed to assume the responsibility for paying compensation to the ship owner and the relatives of passengers. This was with the understanding that the costs of the Occupation of Japan and loans and credits extended to Japan by the U.S. were valid debts reducible only by the U.S.

On April 14, 1949, the waiver agreement was signed by the U.S. and Japan. The MS Awa Maru sinking slipped under the waves of historical memory.

But the MS Awa Maru sinking was a major disaster that deserves a place in maritime history. The passengers who lost their lives must be remembered, and the record must be set straight. Despite oft distorted accounts that attempt to justify the sinking of the MS Awa Maru as a legitimate act of war, the fact is that she was mistakenly torpedoed that April night more than seventy-five years ago.

Find other interesting stories of little-known historical facts by the author, here.