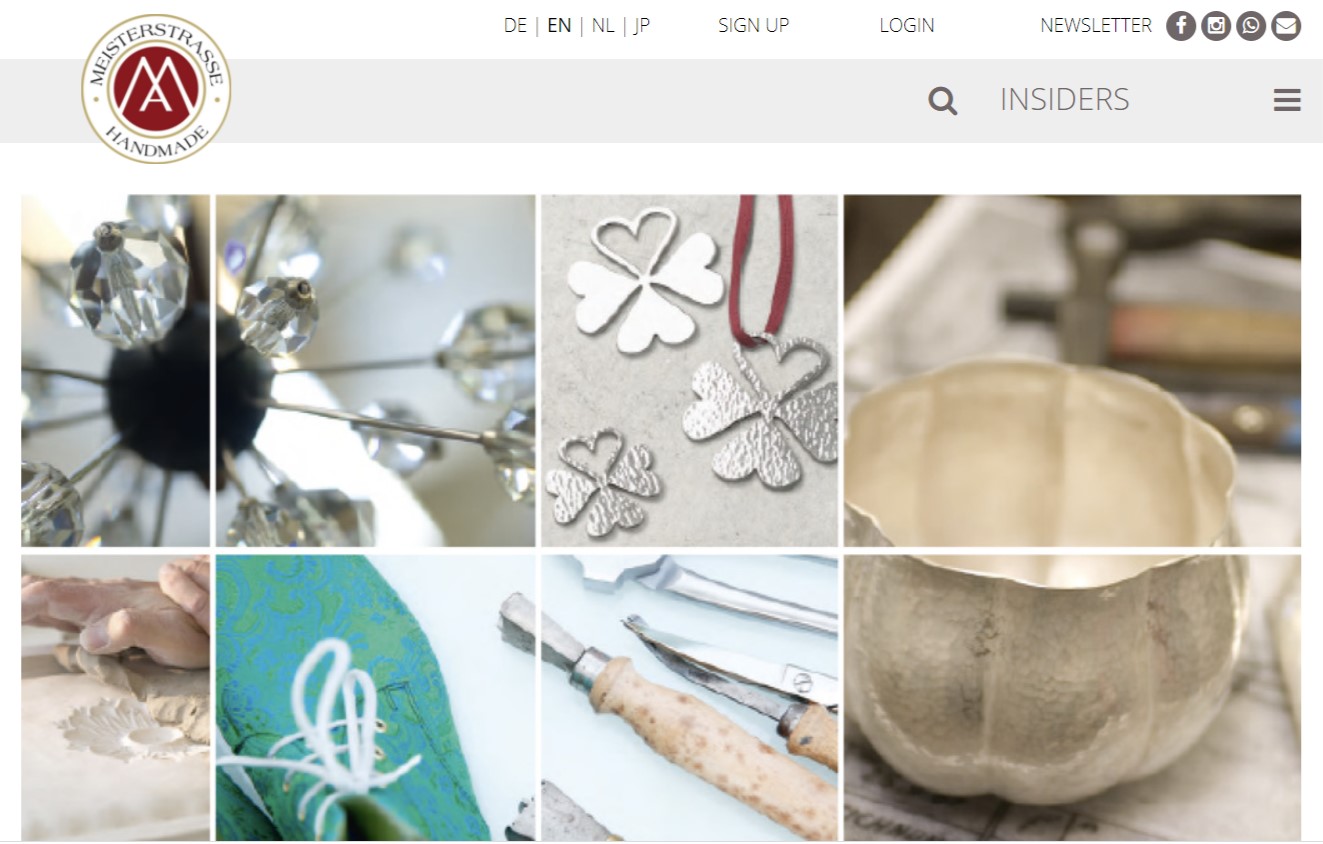 You’ve heard it before: small businesses struggle, traditional arts and crafts have difficulty surviving in the modern world.

But what happens when thousands of craftsmen come together on an online platform to exchange expertise, sell products, and add to the world of craftsmanship?

This is the story of MEISTERSTRASSE.

Started more than twenty years ago in 1999 by Nicola and Christoph Rath, with just nine craftsmen in Austria and the idea to share knowledge and skills, it has become a network of over 5,000 artisans in 13 countries.

And in 2021 for the first time the project is getting a Japan version.

The name literally means “The road of the craftsmen.” The idea was the brainchild of a couple who were managing a sixth generation Bohemian glass business called J&L Lobmeyr, which first started in 1823 in Salzkammergut, Austria.

The couple, who were based in Vienna, put together a handful of artisans who wanted to cultivate a project in their free time that would leave something to the next generation.

“Our idea was to put together a brand of outstanding artisans and their workshops,” Christoph Rath explained in an online press briefing in February 2021, while reflecting back to when the project first started.

It was a time when handcrafts were far from fashionable, but they were trying to promote the value of something handmade, durable, conveyor of territory and tradition.

Their efforts and determination paid off. Rath explained: “Times have changed, and the subject of sustaining regional and handmade production, high quality objects instead of fast-produced ones, became a significant presence.”

Now the website has accumulated more than 4.8 million views and has more than 10,000 paying customers. Artisans can put their products on the website for a monthly fee, organize workshops, participate in arts and crafts fairs around the world, and access a global community of people who love their handmade works.

The idea behind bringing the portal to Japan was explained by Kotaro Nishibori at the February press event, when the Raths came to Japan for the first time.

The couple visited Kyoto in order to build a network with local craftsmen. And of course, there are few people who have a deeper link with local artisans than Nishibori.

Nishibori married into a family of artisans, and has become a fifth-generation traditional Japanese umbrella maker. He had helped revive the family by introducing innovatively shaped lamps and accessories, as well as participating in several innovation projects in Kyoto and beyond.

Moreover, Nishibori is the man behind a research lab and project called Tradition is Continuous Innovation (TCI). It was from this impetus that the idea was born of using the skills for making traditional samurai armor, which involves square tassels connected together with chords, in order to make stylish handbags.

Nicola Rath explained the first encounter with Nishibori: “Our first destination was Kyoto, where we were introduced to Kotaro [Nishibori] on the very first day. It became clear we had found some kind of soulmate. His vision of the future of crafts was exactly the same as ours.”

In this wave of serendipity Nishibori caught the opportunity that the Raths were offering: “We really got along, and had many shared ideas,” he said in the briefing, “and that is how we decided to make the Japanese version of MEISTERSTRASSE”.

He elaborated further in a later interview: “I do about 30 different projects a year with other producers, and if you consider that there are about 10 different producers in each project, if we brought all of that to MEISTERSTRASSE, then we could let many people abroad know about crafts produced in Japan.”

In the interview, he continued: “When thinking of craft on a global scale, Japan is a key country. But they [the Raths] were having trouble finding participants in Japan.”

Thereafter, four other Japanese craftsmen signed up to participate in the first round of the MEISTERSTRASSE Japan Edition ー and they all share the spirit of conserving traditional craft by challenging themselves to something new.

How do they take their crafts beyond the previous limitations? Kazuya Nanjo, for example, has embarked upon the creating beautiful modern looking bells with a pure limpid sound, while the origins of his craft are in working with bronze objects used in Buddhist and Shinto ceremonies. Takeshi Nishimura’s fine expertise is in carving stencils for kimono designs. But his artistry has a modern twist ー he uses them to engrave leather and wood.

The Future of Crafts

Starting with just that original handful of Japanese artisans, now the website has the participation of more than 23 craftsmen.

The start of the international website’s collaboration with Japan is already bringing in fruits in terms of interest, even in times of COVID-19. For that reason, there are high expectations for the possibilities to come.

Coincidentally with the inauguration of the Japan edition of MEISTERSTRASSE, participating Japanese craftsmen organized online workshops attended by about 40 or 50 participants.

“Our European customers and participants were deeply impressed,” commented Christoph Rath in the press briefing in February.

Nishibori told us later in the online interview that, if anything, the challenges caused by COVID-19 and the shifting of communications and sales online might have opened up a whole new spectrum of opportunities for the future of sharing crafts.

“If you think about it, at a fair you can only see things that are brought to the event,” he said, “but if you stream from your own workshop, you can show a space which is not normally accessible to people.”

What struck me most was the background idea: strength in unity.

All these small craftsmen, who would have struggled to survive by appealing only to a small local community, were finding meaning and inspiration in building a worldwide community.

Nishibori stressed the importance of an exchange of ideas for artisans. “For an artisan, it’s also interesting to get inspiration from craftsmen all over the world,” he said. “It encourages creativity, and encourages collaboration, so I think that is a big merit.”

“Money is important, because it attributes value,” Nishibori summarized at the end of the interview.

“If a customer buys something, it’s because he or she thinks there is enough value to that. But we had the same idea as the Raths ー of building a craft family. And that we can later pass on to the next generation.”