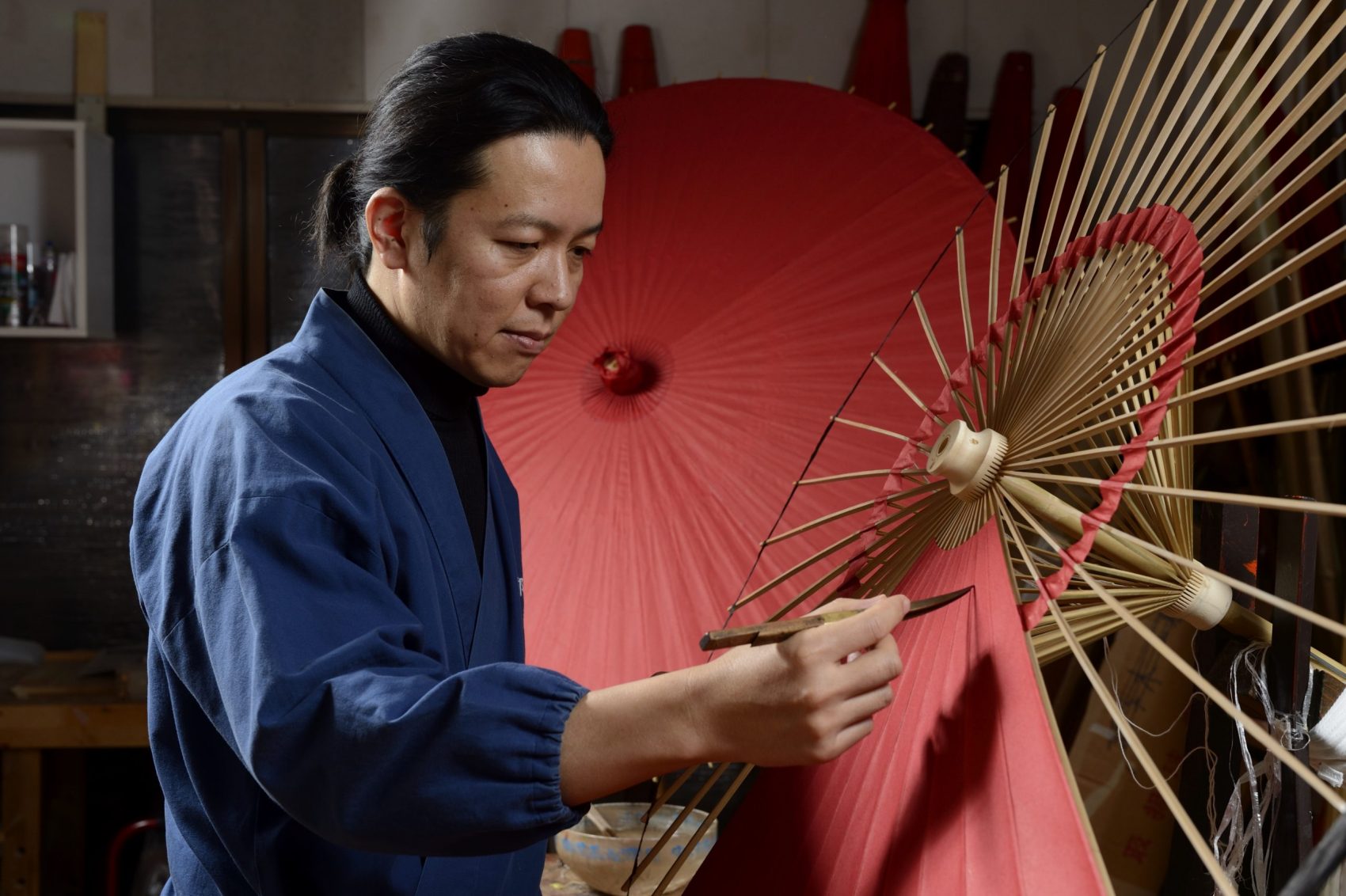 Sometimes for business to be successful, it’s not enough to have centuries of expertise, and to have refined your craft. One needs a new perspective.

These were my thoughts when I interviewed Kotaro Nishibori. Born in 1974 in Shingu Wakayama, he eventually met a person from Kyoto who would become his wife, who happened to be one of two daughters of a traditional paper umbrella business in Kyoto: a Wagasa shop called Hiyoshiya.

In late February, Nishibori had a conversation with JAPAN Forward on how he managed to bring a family business back from a near-the-end status to a successful enterprise. A key part of the chat was about his latest project ー Meisterstrasse ー an innovative platform created in collaboration with craftsmen from all over the world to bring Japanese arts to the world and beyond.

From Shingu to Toronto

How does one become a craftsman of traditional Japanese paper umbrellas? For the uninitiated, Wagasa is the red paper umbrella that we picture Maikos or Geisha carrying around in woodblock prints.

The protagonist of our story was born in Shingu, Wakayama, which some might know as the birthplace of Aikido, a non-competitive martial art focused on self-defense.

Kotaro Nishibori grew up in this town, practicing aikido and surrounded by people from all over the world who would come to the town to learn about the martial art.

But when asked, he explained that he pegged the start of his current life adventure to the time after high school, when he took an opportunity to experience living abroad by studying in Toronto.

“I was at a class for English as Second Language (ESL) at a university in Toronto, and you normally have to introduce yourself, right? That was the first time I had to explain about Japan. It was an opportunity to get to know my culture again.”

Nishibori recalled the embarrassment he felt when he was asked to explain Kabuki, or tea ceremony. It was finding he didn’t know about his own country that provided the impetus to learn more.

Nishibori explains the moment of realization: “It was the first time that I saw Japan from the outside. Toronto is a bit of a mosaic. It has people from everywhere, and my uncle worked in a supermarket in Chinatown. You rub shoulders with people who are immigrants from countries ravaged by civil wars and complicated situations. It was a time when I realized how lucky we were in Japan.”

Eventually, Nishibori came back to Japan, to save up some money for his next steps. At the time, he dreamed about opening a Japanese restaurant in Croatia.

But it was while back for his short spell that he had his first encounter with Wagasa.

Discovering the Appeal of Wagasa

When back in Japan, Nishibori met a woman from Kyoto, who would later become his wife.

“I went to the family house to visit, and that was the first time that they showed me around the family business of wagasa, the Japanese traditional paper umbrella,” he recalled.

Now a craftsman himself, he told us that he had never seen a wagasa in person before, and how he reacted at the time:

“It was a real shock for me, seeing that there were still people who worked with wood and paper to produce something. I am Japanese, but I had never seen a wagasa before, and I thought to myself how beautiful and cool it was.”

Wagasa has a history of almost 1,000 years, going back to the Heian Era (794-1185). And only a handful of people manufacture it in the country these days. It differs from a western umbrella both in materials and structure, and Kyoto is historically the center of wagasa production in Japan.

After a pause, Nishibori reflected on how the encounter happened at the right time, as “It was probably especially because I had just come back from my experience in Canada that I was able to appreciate it,” he told us.

At the beginning of the relationship with his wife, Nishibori of course had no idea he would end up running the family business.

But, because he was interested in promoting Japan, he and his wife started working in the local city government office at Shingu, in the tourism promotion section.

On the other hand, umbrellas made of paper are a tough sell in normal times, never mind when it’s something hand-made that has the connotation of being old-fashioned and irrelevant. The high price tag between several hundred and several thousands of dollars can also deter customers.

However, it was at that point that Nishibori decided he wanted to help. He told us: “It looked like the shop would close. I saw that and thought to myself, what a pity. Because I was doing a tourism-related job, I thought that we could do a website and try to do online promotions.”

This was back in 1996, when the age of the internet was just taking off.

Nishibori explained why he thought building a website was important:

“I am just a regular person, and I think that wagasa is cool. If I think that, there are bound to be other people, albeit a niche number of people, who think the same. But even a small percentage of people, on a global scale, could mean thousands and thousands of people, and for a small craftsman, that is more than enough.”

It was a bet, as it was one of the first Japanese craftsman websites to open.

But it paid off. Just like that, the website started to get noticed. The family business started picking up, and before they knew it, Hiyoshiya had more orders than it could handle.

The Road to Becoming a Craftsman

One can imagine that for a small business producing umbrellas made out of washi and bamboo, it must have been dizzying to see all the messages and orders coming in.

“There were more and more people visiting the website, and saying that they wanted to come and visit the shop, they wanted to buy wagasa,” Nishibori explained. “We went from almost closing the business, to not having enough staff to keep up with the orders.”

To give some concrete figures, the business went from having a profit of ￥1 million JPY in a profitable year (about $10,000 USD), to 20 times that amount, in the span of a couple of years. Since then, the profits have grown steadily.

There wasn’t enough staff, so Nishibori himself started helping out.

“We would go to Kyoto on the weekend, get supplies, have the craftsmen teach us what to do, and then we would go back to Shingu. We would be civil servants during the day, and umbrella makers at night”, laughed Nishibori.

After a couple of years, it was a question of how to take the business forward. And despite initial misgivings, Kotaro Nishibori became the successor in the family business in 2004, at the age of 29.

Despite the appeal of traditional crafts, Nishibori himself understands that umbrellas made of paper aren’t the most practical thing in this day and age, starting with the sheer labor-intensive process.

“From the point of having all the raw materials, it takes between one to two weeks to make a single umbrella.” This explains why the objects can cost several thousands of dollars.

But, as Hiyoshiya’s slogan would have it: tradition is constant innovation. In 2004, Nishibori explained that he got the idea of trying something new, and he told us how the idea for it came about:

“With the umbrellas, after applying oil [to make it water repellant] we normally let them dry in the garden of the temple just in front of our shop. As I was handling the umbrellas, and the light filtered through the colorful paper, the light would pick up a beautiful tint in the floor below. That’s when I thought: why don’t we try to make lamps using the technology of wagasa?”

After two years of trial and error, in December 2006, Hiyoshiya came up with the first lamps, made with the same principle as wagasa, using bamboo, washi paper, and foldable structures.

“We received several awards for good design, both domestically and abroad. And starting from 2008 we did exhibitions in Milan, Paris, New York. The distributors carrying our product increased, and that is how we got to where we are now,” said Nishibori proudly. The numbers are clear, and in fact selling these beautiful crafted lamps now accounts for 70 percent of the company’s business income.

Nishibori is not stopping here. Together with different lamp designs, he has also created a kitchen basket inspired by the shape of an umbrella, and a modern wagasa with a traditional bamboo structure, but with the fabric of convenient polyester, to meet modern needs.

What was the take away point in all of this?

It seemed that the winds of people appreciating craftsmanship were changing, and Nishibori was ready to take advantage of the tailwinds.

“When I started, it was very different. People didn’t really know about traditional crafts. There really was an idea that wagasa was old. There was a really bad connotation. Now, with my generation, things have come full circle. People like me have realized that Japan has good things too,” he explained.

And the appreciation in Japan has been echoed abroad. It is a renewed appreciation of durability, sustainability, and beauty, something unique made by hand by experts who were using craftsmanship that goes back hundreds of years.

In essence, the umbrella maker summarized: “For any sector, like say kimono, it’s not necessary to keep doing the same things that have been done for the past 100 years. Because 100 years ago that was cool, as it was new. And you need to adapt to the times.”

Who knows what this umbrella maker will come up with next?

Find out more about Hiyoshiya and its traditional – and innovative products at their website, here (in Japanese), and here (in English).

Coming next: more on the Meisterstrasse project.