Celebrating Culture that Connects Us: The 2021 Praemium Imperiale Award Ceremonies 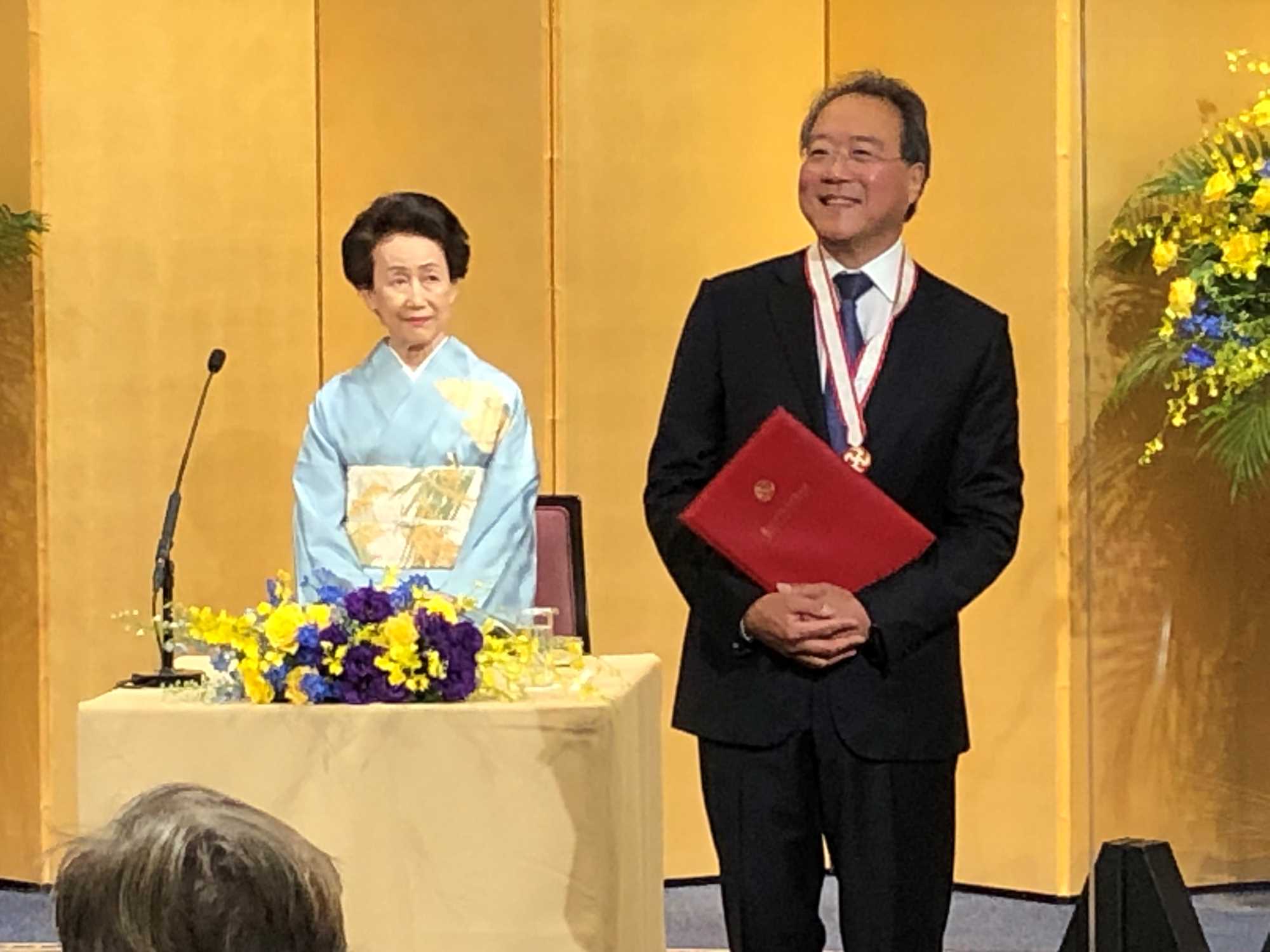 The Japan Art Association is celebrating the 32nd Praemium Imperiale Laureates in ceremonies in Tokyo,  Paris, New York, and Canberra, from mid-October to mid-December, 2021.

Each of the 2021 laureates has been recognized for her or his individual achievements in the arts of Painting, Sculpture, Architecture or Music, their impact on the arts internationally, and their role in enriching the global community.

In Tokyo on October 29, Yo-Yo Ma, this year’s laureate in Music, said:

This prize inspires me to continue my lifelong mission to find connections between peoples, in order to build trust and search for truth, so that we might better serve one another and work together to imagine and build a better world.

Yo-Yo Ma’s words emphasized the role of culture and the arts in society, building bridges of understanding and opening doors of hope.

The inspiration and work of Mr. Yo-Yo Ma and his fellow laureates in 2021 also presage the direction of arts in the future.

In the presence of Her Imperial Highness Princess Hitachi, the Japan Arts Association gathered in Tokyo on October 29 to present the 2021 Praemium Imperiale Award in Music to the inspirational and globally renowned cellist Yo-Yo Ma.

Japan Art Association chairman Mr. Hisashi Hieda opened the October 29 ceremony, saying “The Praemium Imperiale was established to contribute to the peace and well-being of the people of the world through the arts, and Mr. Yo-Yo Ma is a very worthy recipient of this award.” He added praise for the new laureate’s wide ranging music activities and noting in particular his recent efforts, saying, “Inspiring cello sound by Mr. Yo-Yo Ma has soothed, encouraged and united those suffering from the coronavirus pandemic.”

“It is a great regret for me to learn that the Awards Ceremony was canceled due to the coronavirus infection following last year’s ceremony. In such circumstances, I am delighted that the medal will be awarded today to Mr. Yo-Yo Ma. I wish you all the best in the future and good health.”

The artist thanked the association upon receiving the commemorative medal and the Japan Art Association testimonial letter from Mr. Hieda. He then expressed his feelings about the Praemium Imperiale, saying:

I believe profoundly in the power of nature and of culture to help us to understand and celebrate the human spirit.

Following the presentation, the 2021 Music laureate took questions from the media. Responding enthusiastically to each one, he generously shared his philosophy on the role of arts in building connections and understanding between us.

Before leaving the room, Yo-Yo Ma brought out his cello and for the Japan Arts Association, and the Praemium Imperiale selection committee members and all of those present, played the gift of the Bach Cello Suite No. 1 in G Major.

His words and deeds echoed in a very tangible way the philosophy of the late Prince Takamatsu, who had served as honorary patron of the Association for 58 years. It was Prince Takamatsu’s wish for Japan to promote world peace through the arts.

The ceremony, severely limited in attendance due to continuing COVID-19 precautions, took place at the Okura Hotel in the Toranomon District of Tokyo’s central Minato ward. Members of Music Selection Committee, including Mr. Tsuyoshi Tsutsumi, President of Suntory Hall and also a cellist, and Mr. Michiyoshi Inoue, currently conductor at the Nagoya Philharmonic Orchestra, were also present. Mr. Tsutsumi made a congratulatory speech on behalf of the Committee.

(More to follow on Yo-Yo Ma’s comments and the direction of the Praemium Imperiale in culture and the arts in an upcoming article.)

Ten days earlier on October 18, a Praemium Imperiale ceremony was held at the official residence of the Japanese Ambassador in Paris to present the commemorative medal to Mr. Sebastião Salgado (Brazil/France), 2021 laureate in the category of Painting.

Mr. Salgado was recognized for his powerful works that “put a spotlight on the dispossessed and exploited, the beauty of nature, and the fragility of the world and its inhabitants.”

RELATED: The ‘Gift of Pictures’: Praemium Imperiale Laureate Sebastião Salgado on his Photography

Japan’s Ambassador to France Mr. Junichi Ihara opened the ceremony by conveying the words of His Imperial Highness Prince Hitachi, Honorary Patron of the Japan Art Association, as follows: “Originally, I would have liked to see you in Tokyo and present you with the medal. But due to the coronavirus infection, the Awards Ceremony was canceled, which is a great regret. I would like to express my heartfelt congratulations on your receiving this award.”

Mr. Salgado, who was presented the Praemium Imperiale medal by Ambassador Ihara, expressed his delight, saying, “It is a great honor to receive this award.”

After the ceremony, a commemorative photo was taken with Ambassador Ihara, Mr. and Mrs. Salgado, and a small number of friends of Mr. Salgado. This was followed by a luncheon attended by these members in honor of Mr. Salgado.

On October 19, a Praemium Imperiale ceremony was held at the residence of the Consul General of Japan in New York, presided over by Consul General and Ambassador Mr. Kanji Yamanouchi, to present the commemorative medal to Mr. James Turrell, the 2021 laureate in the category of Sculpture.

The ceremony was moderated by Mr. David Rockefeller Jr., Honorary Advisor to the Praemium Imperiale, and included video profiles of the laureates.

At the end of the ceremony, there was a photo session with Mr. Turrell, Ambassador Yamanouchi, Mr. Rockefeller, Mr. Luers and the previous laureates. This was followed by a reception.

The Praemium Imperiale award in the category of Architecture is awarded to Mr. Glenn Murcutt of Australia. Mr. Murcott’s work focuses on “living with the landscape” and building without harsh impact on the environment.

Mr. Murcutt was also unable to come to Japan for the presentation of his award. Instead, it will be presented to him at the Japanese Embassy in Canberra, Australia, in the afternoon of December 14, by Ambassador Shingo Yamagami. A small number of Mr. Murcutt’s friends are also expected to attend the ceremony.

About the Japan Art Association

The Japan Art Association dates to 1867, during the Meiji era of Japanese history when a prominent member of the Meiji government presided over its beginnings, with a member of the imperial family as its patron.

Renamed the Japan Art Association in 1887, the organization took on the exhibition and promotion of the arts in Japan and internationally. The Praemium Imperiale Awards were created in 1988 as part of the organization’s 100 year anniversary celebration. It’s central guideline is to promote peace through the arts.