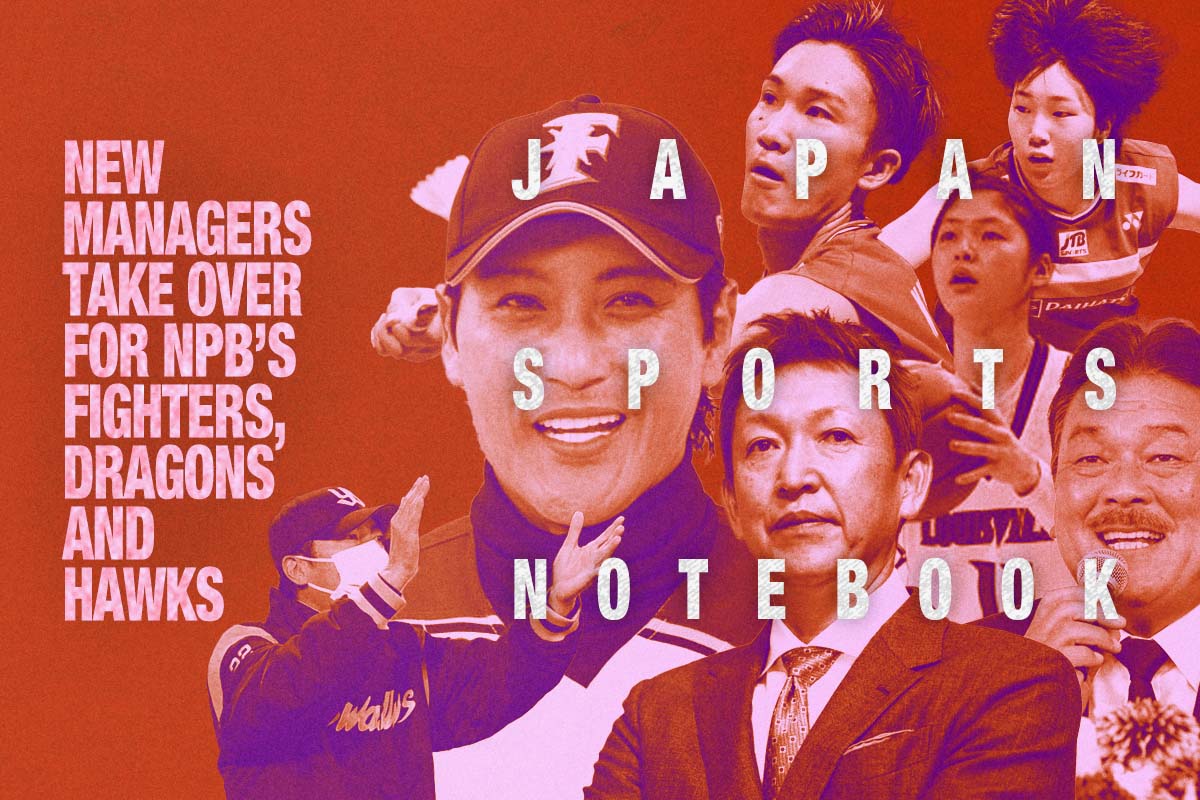 The three men were formally announced as new managers by their respective clubs on the final weekday of the month, and they replaced Hideki Kuriyama, Tsuyoshi Yoda and Kimikazu Kudo, respectively.

Of the three departing dugout bosses, Kuriyama had the longest tenure, serving as the Nippon Ham manager for 10 seasons.

Which is why the newly appointed managers will face immediate pressure to deliver solid results for their respective teams.

The Dragons wrapped up their 2021 season with a 55-71-17 record, finishing in fifth place in the six-team Central League.

“The mission I’m on is to strengthen the team by any means. I won’t compromise in order to play winning baseball,” the 52-year-old Tatsunami was quoted as saying in published reports from his introductory press conference as manager.

Like Tatsunami, Fujimoto has high aspirations in his new job.

“I’ll give everything I have to bring the best out of each player,” the 57-year-old Fujimoto told reporters on the same day, according to Kyodo News.

Before being chosen as the Hawks’ new manager, Fujimoto served as SoftBank’s farm team (ni-gun) manager this season. He’s been a coach in the organization since 2011.

The 49-year-old Shinjo, who began his NPB career with the Hanshin Tigers in 1991, retired in 2006 after helping the Fighters win the Japan Series. He joined the club in 2004 after three seasons in MLB, two with the New York Mets sandwiched around a one-year stint with the San Francisco Giants. A seven-time NPB All-Star, Shinjo was known for his defensive skills in the outfield. He won 10 Golden Gloves in his career, including in each of his final eight NPB seasons (1996-2000, 2004-06).

Shinjo has never managed nor coached at the pro level.

How effective Shinjo and Inaba are working together could determine the course of the franchise for the next several seasons.

One for the History Books

The Tokyo Yakult Swallows and Orix Buffaloes went from worst to first in their respective leagues, a dramatic reversal of fortunes this year.

Never before had both NPB pennant winners in one season finished last the previous season.

A season ago, the Swallows finished in the Central League cellar at 41-69-10, while the Buffaloes were worst in the Pacific League at 45-68-7.

Remarkably, the Tokyo club also had a worst-to-first rebound in 2015, when it captured its last CL pennant.

Entering their regular-season finale on Monday, November 1 against the Hiroshima Carp, the Swallows have 73 wins, 51 losses and 18 ties.

Yakult receives an automatic bye into the CL Climax Series Final Stage. The second-place Hanshin Tigers and third-place Yomiuri Giants will meet in the opening round, starting on October 6. For the winner, a showdown with the Swallows will follow.

Like the Swallows, the Buffaloes turned things around in dramatic fashion this year, too. Orix won the PL pennant with a 70-55-18 record.

The PL Climax Series First Stage gets underway on October 6, with the Chiba Lotte Marines, who finished in second place, playing host to the Tohoku Rakuten Golden Eagles. The Buffaloes will meet the winner.

Orix, which also finished in last place in 2019, had a much longer dry spell between pennants. The Kansai-based team last won a league title in 1996. The Buffaloes clinched the pennant on Wednesday, October 27.

Buffaloes manager Satoshi Nakajima was determined to transform the club into a winner this season.

“The very first thing I said this year was, ‘Somehow we are going to turn this around after two straight last-place finishes,'” Nakajima said, according to Kyodo News. “We’re where we are now because the players and others took it to heart.”

Nagoya Grampus outclassed Cerezo Osaka in the second half of the Levain Cup final on Saturday, October 30 at Saitama Stadium.

More importantly, Grampus broke the scoreless stalemate shortly after the second half began.

Naoki Maeda made it 1-0 in the 47th minute. Teammate Sho Inagaki added an insurance goal in the 79th, and the score held up until the final whistle blew.

For Nagoya, it was the franchise’s first major achievement since winning the J. League title in 2010.

Louisville faces the University of Arizona in its first official game of the new campaign on November 12.

Akane Yamaguchi collected the Denmark Open women’s singles title after her opponent, Se Young An of South Korea, withdrew due to an injury on Sunday, October 24.

“I’m happy with a win at a tournament of any level. I’m particularly happy with this one because it’s been a while since I last won,” Yamaguchi told reporters in Odense, Denmark, of her first title since January 2020, when she won the Thailand Masters.

Momota Retires from French Open Semifinal Due to Leg Injury

But the top-ranked Momota pulled out of the match due to leg pain. He lost to fellow Japanese Kanta Tsuneyama, who recorded a 24-26, 21-11, 1-0 victory in Paris.

“I can’t ask for a bigger honor than this.”

“While enjoying the thrill of finally bringing those things I can do to Japan, one by one I will prepare each aspect well.”

“I’d decided that my last race would be at the Tokyo Olympics. I’m amazingly happy and have no regrets. When it came to bringing [my career] to an end, I had a strong inner resolve.”