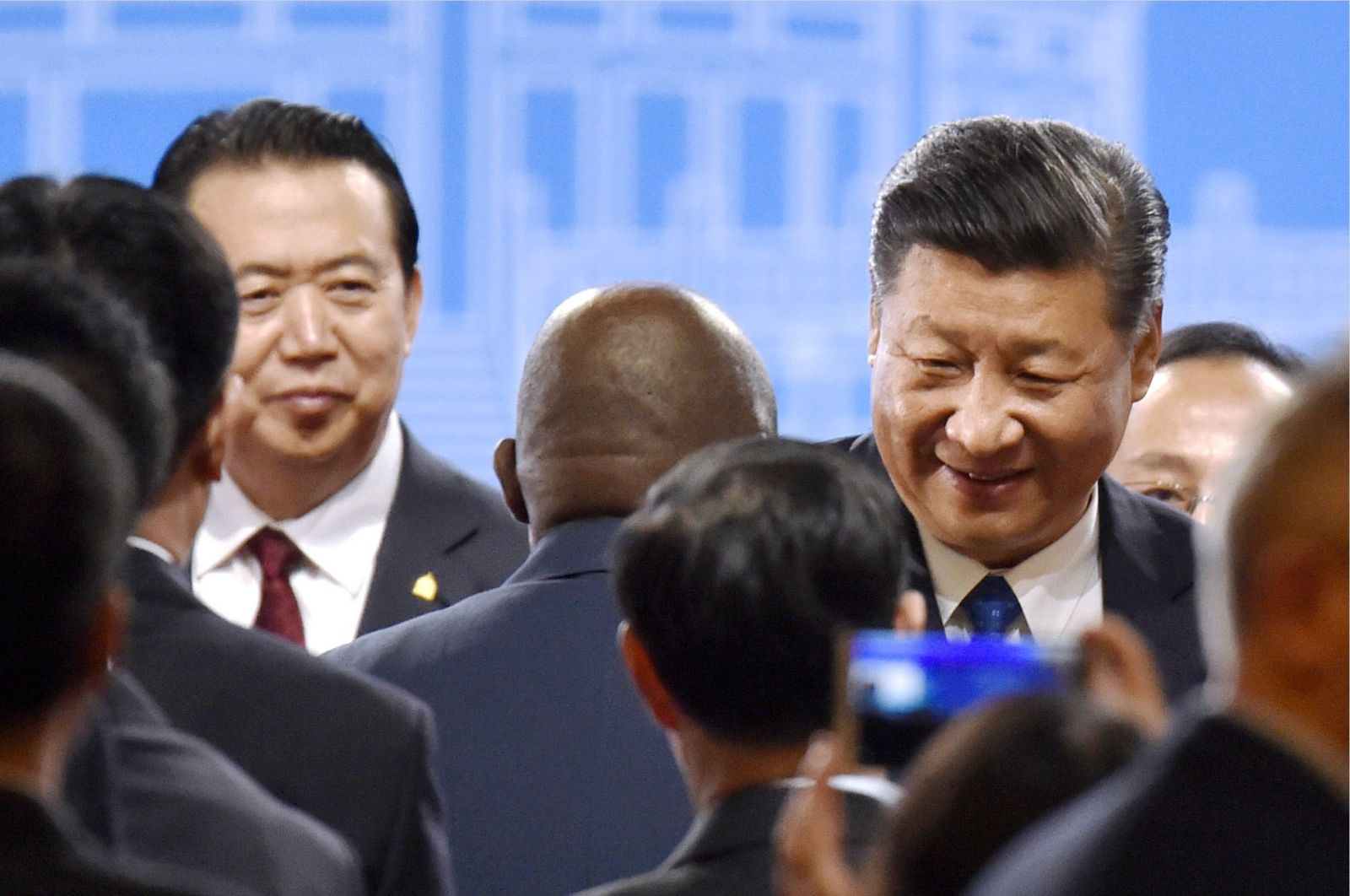 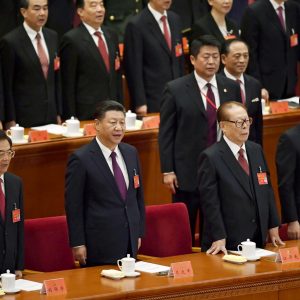 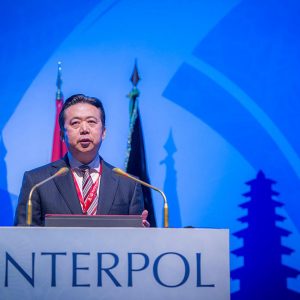 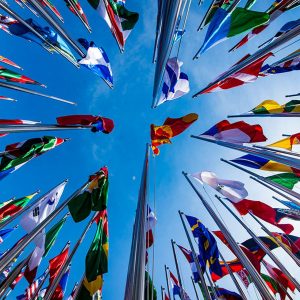 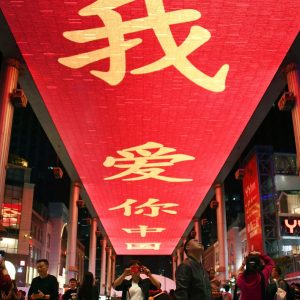 Part 1: Did China Corrupt Interpol to Get the Presidency?

Part 2: The Fall of Interpol President Meng Hongwei: Abuse of Power or Coverup by China?

Mr. Zhou Yongkang belongs to a political faction in China that rivals President Xi, and is centered on former president Jiang Zemin. Some in China see the last years of the Jiang government as having greater freedoms of speech, less surveillance, and less police interference than the current Xi government.

In 2015, Mr. Zhou Yongkang was sentenced to life imprisonment for “bribes, abusing his power and deliberately disclosing State secrets,” according to the CCP’s China Daily. President Xi in 2015 had said that Mr. Zhou Yongkang and other high officials had been involved in “political conspiracies.”

Mr. Meng’s detention is “entirely the outcome of his sticking to his own ways, and he only has himself to blame,” said Mr. Zhao Kezhi. The Minister of Public Security said with respect to Mr. Meng: “It fully demonstrates the clear attitude of the party Central Committee with comrade Xi Jinping as the core to strictly manage the party and carry out the anti-corruption struggle.… It is necessary to make the legal system a ‘high-voltage line’ of electricity.”

The strident language of this communication demonstrates the latest of a recent trend towards increasingly brutal political maneuvering in Beijing.

Interpol’s Lack of Concern for Rule of Law

Interpol received Mr. Meng’s letter of resignation a few hours later, and blandly accepted it. The international organization failed even to raise questions about whether a resignation under duress is legitimate.

Mr. Meng had two years remaining in his position as Interpol president.

Conversely, Human Rights Watch made the point that it was highly likely that Mr. Meng would be in secret detention for up to six months, without access to lawyers or family, and could be subject to torture and solitary confinement. It is one of those moments in history when the torturer becomes the tortured, and people in the human rights community still show compassion.

On October 9, state-controlled China Daily approvingly paraphrased Jiang Laiyong, of the China Anti-Corruption Research Center of the Chinese Academy of Social Sciences, as saying that “the change [to Mr. Meng’s status] might be because supervisory inspectors first discovered Meng’s suspected illegal acts, and they intervened in a timely fashion.”

The CCP did not want to be seen as having helped appoint an official to Interpol who was known to be corrupt. They implied through Jiang Laiyong that the corruption was only discovered later. This is unlikely.

In addition to corruption, the CCP was likely concerned with violations of party discipline, including purely ideological faults. “During the investigation, if discipline officers found Meng also had violated party rules, he would face punishment within the party as well,” Jiang Laiyong said.

Chinese security arrested Mr. Meng just five weeks prior to Interpol’s 87th General Assembly Session, planned for November 18 to 21 in Dubai, United Arab Emirates. The proximity of the detention to the annual conference has led some analysts to question whether there might be a connection or ulterior motive on the part of the CCP.

“Knowing how Beijing operates, we should suspect that this is about more than the arrest of one man,” emailed Paul Midler, author of several books on China. “We should not be surprised to hear Beijing officials arguing that … [Interpol is corrupt and therefore] China needs its own Interpol.”

They also include a little-noticed attempt to create an international maritime court.

The commission was founded to convey a patina of legality to the CCDI’s extralegal activities. But it is answerable only to the CCDI and state supervisors that it is supposed to regulate.

This puts it squarely under the politicized and factional control of the CCP, rather than some larger constituency in the Chinese government. China’s courts and prosecutors are notoriously servile to CCP demands, and the conviction rate in China, following detention, is 99%.

Mr. Meng’s appointment to Interpol almost certainly had the approval of President Xi,  according to the New York Times. Sinoinsider portrays it more as grudging acquiescence.

At the time of the Interpol election in 2016, Mr. Xi could not afford to alienate the Ministry of Public Security, which was then under Jiang-faction leadership. Mr. Meng had worked with Interpol since 2004, and his election would be in the interests of the CCP more broadly.

Two years later, the Ministry was in the hands of Mr. Xi’s faction, and so he had more latitude to remove Mr. Meng, despite the negative publicity for China and the CCP. Sinoinsider takes this as evidence of a “soft coup” attempt by the Jiang faction that is being effectively resisted, most recently by the detention of Mr. Meng.

Mr. Meng might have kept his position had he helped undermine the Jiang faction and more vigorously pursued Mr. Xi’s priorities in Interpol. For example, Xi Jinping would have expected, in his ideal world, that Mr. Meng should have used his tenure as president to rapidly achieve extradition of dissident billionaire Guo Wengui. The same goes for activists Dolkun Isa and Wang Zaigang, both of whom Interpol abused with red notices.

According to AFP journalist Matt Knight in Shanghai: “About 6 weeks after [the] CCP expressed dissatisfaction with Interpol cancelling the red notice for @UyghurCongress leader Dolkun Isa, the Ministry of Public Security announced Meng Hongwei was no longer a member of its Party Committee. Now six months on, he has disappeared.”

This implies that Mr. Xi himself likely blamed Mr. Meng for his failure to more effectively wield Interpol for CCP purposes.

Professor Victor Mair, a sinologist at the University of Pennsylvania, noted in an email that there is little evidence indicating why the CCP detained Mr. Meng. But Professor Mair advances a theory based on what he heard from sources in China. Like them, perhaps Mr. Meng had entertained subversive thoughts.

“My best surmise at the present moment is that Meng had begun to entertain subversive thoughts against Xi and the latter caught wind of them, perhaps because Meng foolishly confided in a would-be collaborator or collaborators,” said Mair.

According to Professor Mair: “From many sources, despite the danger of their confiding such opinions to me, I have been hearing unprecedented and increasingly discontented [views] from a broad range of Chinese citizens. There has never been anything like this in the history of the PRC. People are really upset about what Xi is doing to China, and they are worried that it will all come to some horrible end. Sensing this, and stimulated by his overseas experience (cf. Sun Yat-sen, Zhou Enlai…), it is possible that Meng may have thought something has to be done about Xi’s wild ambitions — both domestically and globally — before the whole country goes down in flames.”

How Interpol Can Recover its Authority

If something is done about Xi’s ambitions, or even just the Chinese presidency of Interpol, it could be a major win for the organization’s long-held principles of neutrality, respect for refugees, and human rights.

According to Terri Marsh, a lawyer with the Human Rights Law Foundation, “If the democracies could renew control of Interpol, we could ask Spain to ask Interpol to arrest Jiang Zemin and others,” for human rights abuse during their time in power.

Arresting a former president of China might send President Xi the right rule-of-law message. He needs to wake up to the fact that the world sees the CCP less as a defender of the rule of law, as was the CCP’s hope when Mr. Meng was elected, and more as the current party in control of what veteran journalist Paul Mooney has called China’s “thugocracy.”

Whatever one concludes about Mr. Xi’s own corruption, or involvement in Mr. Meng’s rise and fall, his actions have disunited the CCP and again exposed it as a dangerous organization not just to China but to the world.

CCP influence in international organizations, and especially in the world’s premier police organization, should no longer be tolerated.